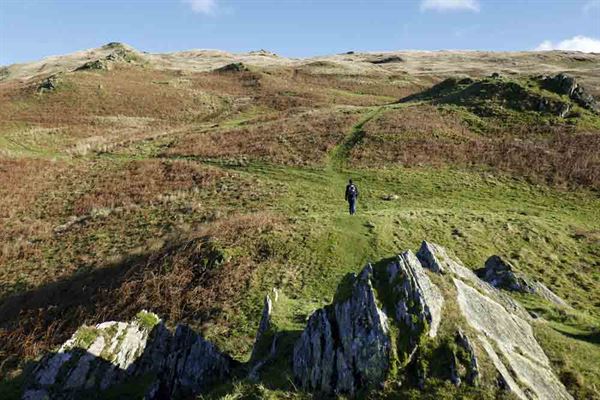 Standing on top of Sour Howes, not a soul in sight, my husband and I had to remind ourselves we were just a hop and skip away from the bustle of Bowness-on-Windermere, the Lake District’s busiest resort. Sour Howes is a lowly grassy fell, 483m (1,585ft) high and on the edge of the central Lake District fells, so it is not surprising people don’t flock here.

It is a great viewpoint, and a first-rate walk on a glorious autumn day. Below us was an intricate patchwork of dry stone walled fields and, across the valley, the white buildings of Troutbeck village were strung out along the hillside. The ribbon of Windermere glimmered in the low sunshine.

Since Lake District tourism began, this southern corner has been the easiest to access and attractions and campsites followed the crowds. Although I love the Lake District, in recent years I’ve headed for the quieter northern fells; it was time to rediscover Windermere and its surroundings.

After a quick stroll around Troutbeck – its traditional Lake District buildings include Townend, a National Trust seventeenth century farmhouse –we drove down to Bowness-on-Windermere. 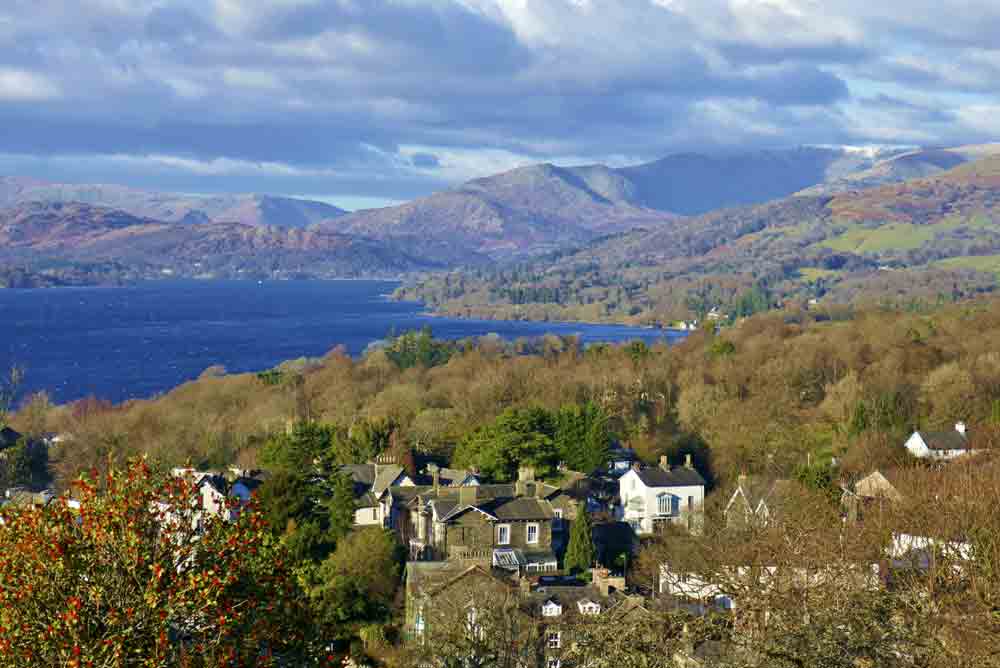 We stopped at Hammarbank viewpoint to look over Windermere to the Langdale Fells. In the sunshine the lake was a stunning indigo colour, the breeze whipping up small white waves.

At the lakeside we found the crowds; families feeding the wildfowl, young people on the shore posing for photographs and older people wrapped up ready for a boat trip around the islands.

I was keen to take to the water, but Anthony persuaded me that we needed warming mugs of tea in a comfortable café.

One of the reasons we enjoyed staying at Braithwaite Fold Camping and Caravanning Club site is that it is a peaceful oasis and only a 10-minute walk from lively Bowness. Tucked into a sheltered bay halfway down the 10½-mile-long lake, Bowness-on-Windermere was just a cluster of houses around the ferry in the seventeenth century.

That evening we walked to a cosy pub with a log fire for a delicious meal and a pint of good beer. Strolling back under a clear, star-filled sky I used the stargazing app on my phone to find Taurus and Gemini, as well as the familiar constellations of the Plough and Orion.

Next morning, we made our own climb of Orrest Head. The gravel path climbs through the woods and there is now an orientation table on the prominent crag.

We soaked in the 360 degree views, Windermere in one direction and the green ridges of the Kirkstone Pass fells to the other.

Back in Bowness we browsed shop windows of gifts, chocolates and artisan gin and found another cosy café for a warming coffee. I discovered that there is an excellent network of short walks radiating from Bowness, each offering fantastic views away from the hustle and bustle and we climbed the hillside streets into woodland and onto Biskey Howe.

The next day we drove to Blackwell, an exquisite Arts and Crafts house south of Bowness. Visitors are made so welcome that I didn’t want to leave.

The layout makes the most of the striking views over Windermere, with window seats that encourage you to linger. Cosy inglenooks around graceful fireplaces furnished with books and magazines invite visitors to curl up and make themselves at home.

A walking tour of Kendal

Coming down the hill to the riverside town of Kendal, my principal impression was of rows of grey-slate Victorian terraced streets. In the nineteenth century tourists bypassed industrial Kendal but, today, it is popular with day-trippers. 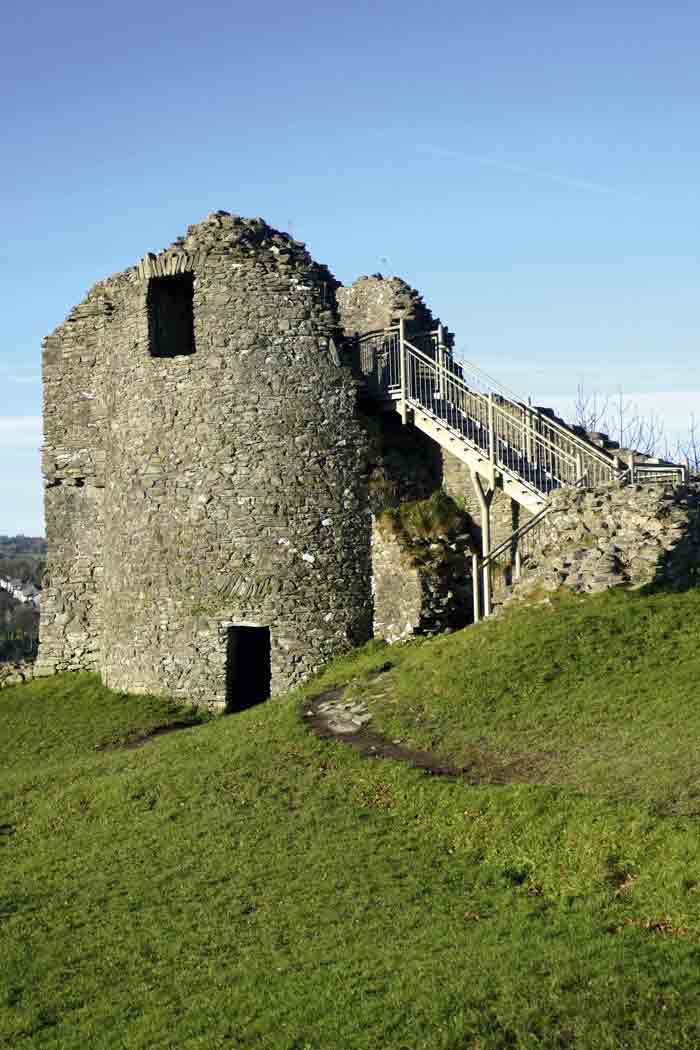 Kendal Castle is the perfect place to start a walking tour as the pattern of the town is laid out below you; the River Kent meanders through the centre and the site of Kendal’s first simple motte and bailey castle is on the opposite hillside.

We took a meandering route towards Serpentine Wood. When we eventually reached it, the beech woodland criss-crossed with paths over limestone bedrock, the carpet of bronze leaves glowed in the low winter light. The sounds of the town were soon lost; all I could hear were the scolding call of blackbirds, with glimpses of Kendal and the surrounding fells through the bare trees.

Back in the town centre we chose a charming café in the medieval gatehouse of Sandes Hospital. Founded by a former mayor of Kendal, Sandes provided eight almshouses and a school, the master living in the rooms that are now the café. Set in the wall you can still see the iron collecting box asking people to remember the poor.

It was the wool trade that attracted workers to Kendal and, walking down Kendal’s main street, I got a sense of how this industry forged Kendal’s unique shape. 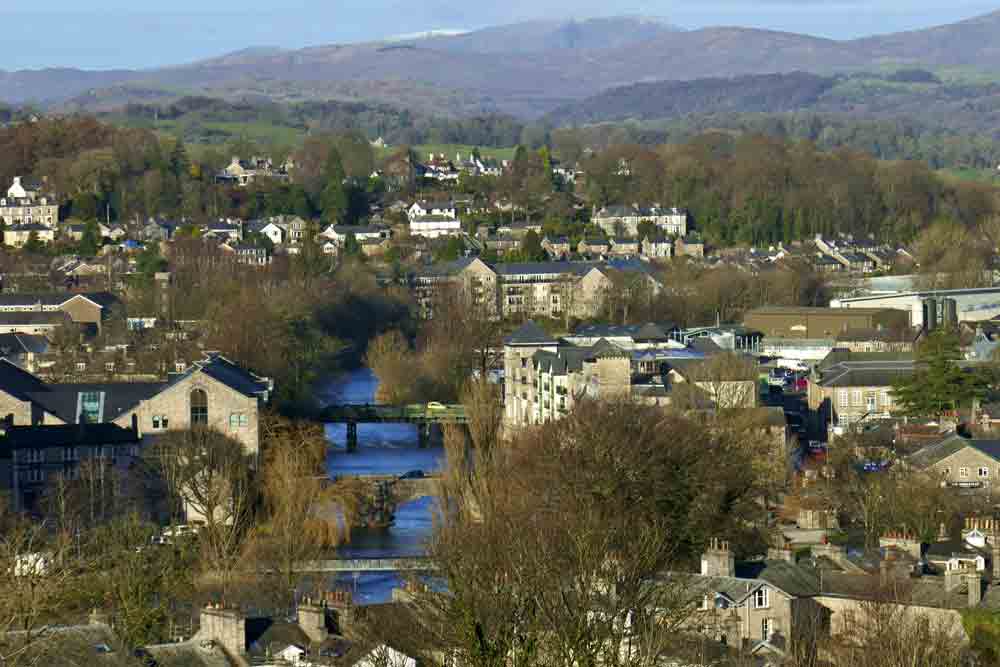 As the town expanded in the eighteenth century, trades were established in what are now called ‘yards’ branching out from the main street in parallel rows. Today, the surviving yards are numbered and have become tourist attractions.

Along Yard 39 were tanners, coopers and joiners and the famous Kendal snuff manufacturer, Gawith Hoggarth. Others had breweries, blacksmiths and shoemakers, as well as woollen mills, stables and workers’ cottages. What noisy and malodorous places these would have been a couple of hundred years ago!

Following the long Tanners Yard down to the River Kent, we strolled along the attractive riverside path. We watched a pair of goosanders diving and swimming along the gravel bed.

Reaching the elegant Georgian Abbot Hall we opted to visit the art gallery that the building now houses; with works from internationally famous artists, this is a world-class attraction. As well as admiring works from household names, I spent some time in the room dedicated to Kendal-born artist, George Romney, a fashionable eighteenth century portrait painter.

After another peaceful night on the campsite we left for home, stopping at Low Sizergh Barn. Rain had set in so we skipped the dairy farm trail and went straight for a browse in the farm shop and bought some local cheese.

Looking back on our few days, I found I enjoyed following the crowds as much as avoiding them. Windermere and Kendal had revealed some peaceful hidden corners, fascinating indoor attractions, stunning views and plenty of welcoming cafés.

This feature was orginally published in the February 2019 issue of MMM magazine - click here to buy a digital back issue.