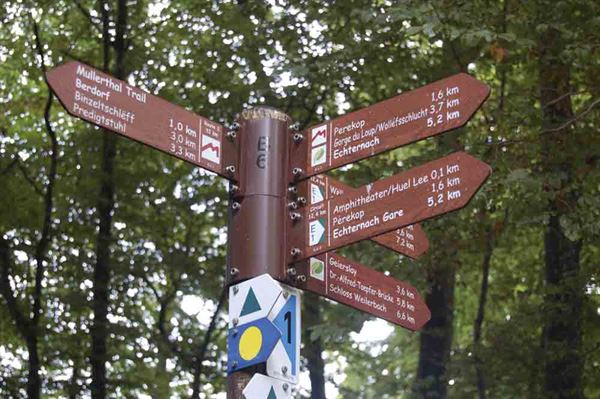 We’re off to Luxembourg to walk the spectacular Müllerthal Trail, bowling down the road in bright sunshine, boots polished, walking poles at the ready and maps folded neatly.

That’s in my dreams.

In reality, rain is lashing the windscreen, my husband, Eric, has forgotten his walking socks, I have a painful knee and the only guidebook we have is in German, which neither of us is fluent in.

It’s all down to Bill Bryson that we’re here. There’s that bit in his A Walk in the Woods book where, deep in a dense Appalachian forest with the prospect of the night in a tent and the same rehydrated noodles he’s had for supper for a week, he thinks of a walk he once took in Luxembourg, where the perfectly signed and most scenic path wandered from village to village, each with a warm inn, good food and comfortable bed.

I’d always thought of Luxembourg as the city itself, surrounded by a thin rim of nondescript territory maybe akin to that of northern France. A little research and it became apparent that we’d been missing a major trick. Luxembourg has its own distinct character and very attractive it is, too.

As for the walking, the whole country is laced with comprehensively signposted paths leading past caves, castles, waterfalls and viewpoints. Of all these, the country’s flagship, its pride and joy, is the Müllerthal Trail.

This trail is centred on the little town of Echternach, about 20 miles northeast of Luxembourg City, and is arranged in three linked loops of about 40km (25 miles) each. The campsite, in Echternach, turns out to be just right. It’s a short walk from town and about 300 yards from the bus station, which is good because the Müllerthal Trail is very well served with bus routes.

In the morning it’s still raining. Socks bought, knee strapped and the French version of the same guidebook acquired, we plan to ease ourselves in gently with what we’re told is the local ‘walk before Sunday lunch’ part of the trail; take the bus to the village of Berdorf and make the return five miles to Echternach on foot. 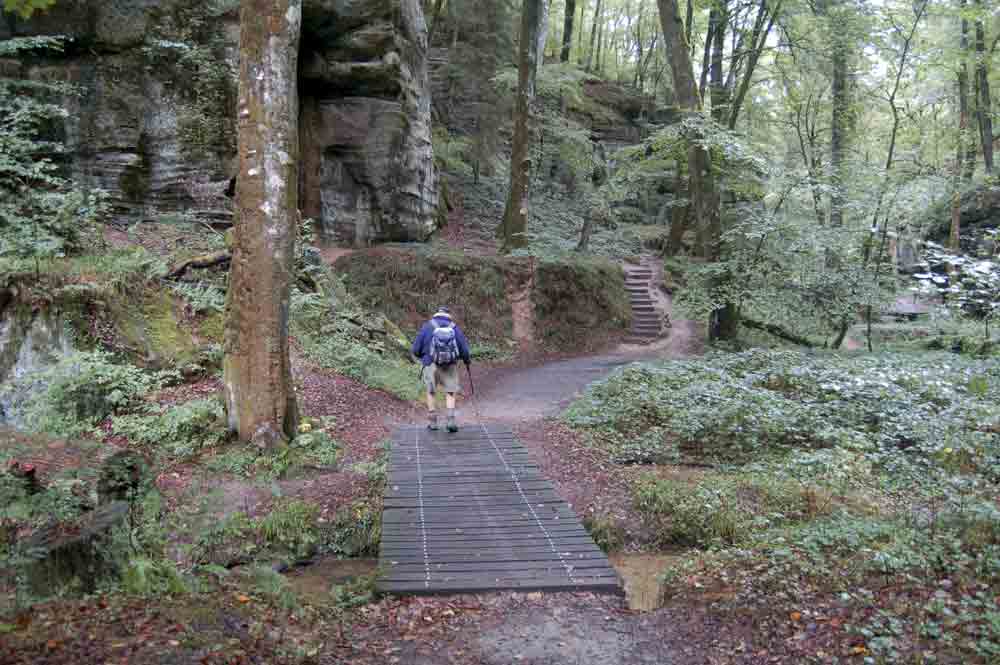 It’s amazing. Rocks weathered into bizarre shapes are towering around us, dripping green with ferns and ivy. Deep in a wooded valley, streams tumble over boulders, forded by wooden bridges. Steps roughly cut from the rock climb to nowhere and descend again. There are caves on all sides.

By the time we emerge above Echternach almost four hours have passed, lunch has become tea and the knee is none too happy. But we’re sold on the Müllerthal Trail!

The next day, we’ve decided to start at the beginning of the first and easier loop.

As we follow the level path along the banks of the River Sûre, suddenly we’re up in the forest again, scrambling over a roller coaster rocky path and gasping at every new vista. Maybe it’s not quite as spectacular as yesterday, but it’s still show-stopping stuff.

By afternoon we’ve managed just over five miles and we’ve reached the village of Rosport and its bus stop. Since it’s another five miles to the next of these we decide to call it a day.

The third day proves easier. The highlight is a little pilgrim chapel set in the fields. It’s a beautifully peaceful spot and, amazingly, the sun comes out to greet us there, although it doesn’t stay long. We cover nearly eight miles to the village of Moersdorf, but clearly we’re nowhere near on target and our plans need a rethink.

The Müllerthal Trail is superb, but what we have seen of the rest of Luxembourg is pretty impressive, too. We’ve snatched a glance at Echternach, a most attractive town with a fourteenth century abbey at its heart, a large lake with fountains outside and the excavation site of a Roman villa nearby. We decide to leave the walking for a couple of days and explore a little more widely instead – starting with Luxembourg City, just an hour’s bus ride away.

Our first port of call is the Corniche Path, from where there is a classical view of the Abbaye de Neumünster beside the narrow River Alzette way below.

The path ends at the entrance to a warren of tunnels and galleries in the cliff beneath the site of an old fort, known as the Bock Casemates.

There’s a long queue for admission, so we decide to get some lunch instead. Thus fortified and dried out a little, the afternoon wandering the squares and alleyways of the Old Town passes all too quickly and we’re back on the bus again.

Homing in on the castles seems the obvious answer of what to see next – after all, Luxembourg is famous for them. We settle on just four. The first castle, Larochette, turns out to be rather gloomy and the town itself not that inspiring, but we’re enchanted with the second castle at Beaufort, which is in a valley.

Beaufort is two castles in one – ruined medieval and later renaissance – and its moated setting is charming.

The castle at Vianden is in another league again. It’s enormous, all turrets and stepped gables and its perch is said to be a mighty 700m (2,296ft) above the river and town below. 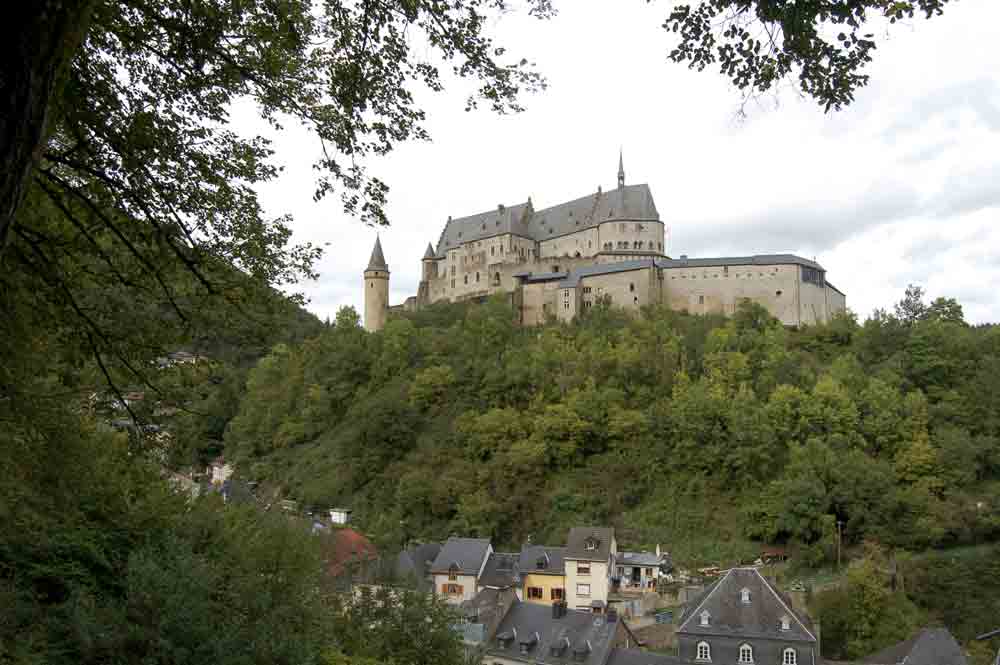 Esch-sur-Sûre is our final destination and this village has just a touch of the fairy tale about it. Quaint houses are stacked higgledy-piggledy on the slopes of a knoll encircled by the river. A grey church spire leaps from among them and a one-thousand-year-old castle keep looks down on it all.

But, we came for the Müllerthal Trail and we need to get back to it. The central loop is said to be the most spectacular and the most demanding and to access it we move the ’van to another excellent site in the village of Consdorf.

From here our first walk is to the iconic waterfall, the Schiessentümpel, the image of which appears on every brochure of the area. 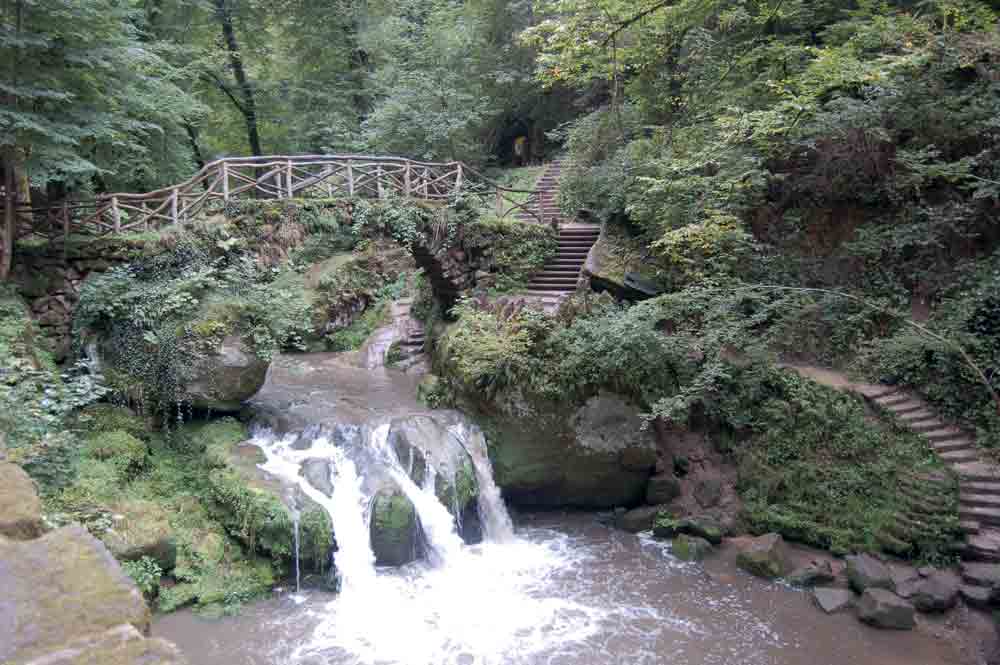 The most memorable rock formations of the entire trail are within easy walking distance of Consdorf. Following the twisting woodland track again, we soon reach something by the name of Kuelscheier.

Farther on is the Déiwepëtz, where the rocky gap is so narrow we need to remove our rucksacks and wriggle a little. More than average proportions and you’ll surely get stuck and there is no bypass to this one!

We will be back to finish the Müllerthal Trail. And, when we do, we’ll bring our bikes because there are superb cycle routes through every river valley.

Why has it taken us so long to explore Luxembourg?

This feature originally appeared in the December 2018 edition of MMM - to read the full version, buy a digital copy of the issue here. Read more inspiring travel features here.