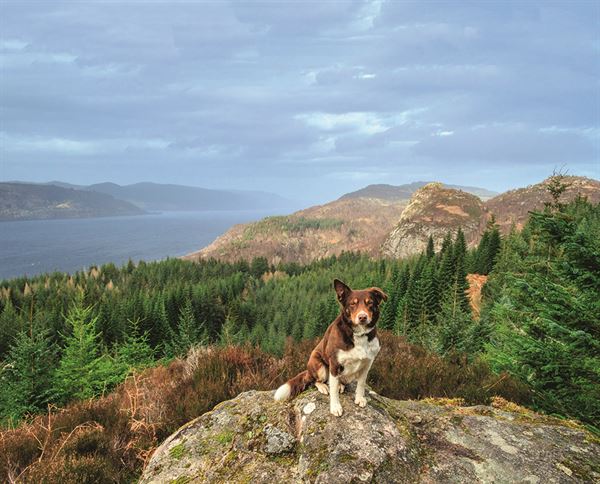 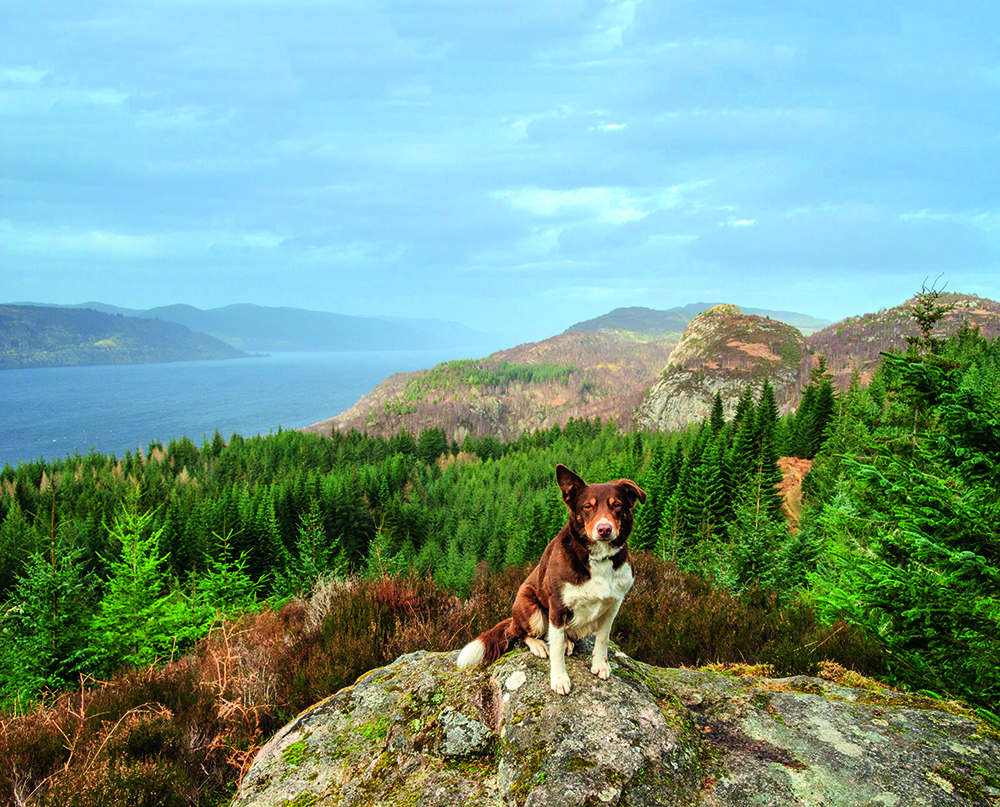 My first stop will be in Nairn, on the south shore of the Moray Firth. I’m hoping the area will live up to its reputation as one of the driest and sunniest spots in Scotland. Then, I will explore the less-visited south side of Loch Ness, before driving up the Black Isle, the peninsula jutting into the Moray Firth north of Inverness, to Cromarty.

For this trip, I have my itinerary worked out in advance, as I plan to spend five days researching walks for a new guidebook. Apparently, over two billion adult days are spent on walking as a leisure pastime every year in the UK. And, apparently, 47% of trips made by UK visitors to Scotland involve some walking. For years I stayed in tents, hostels and B&Bs while walking all over the country – from Orkney to the Mull of Galloway. Since buying a motorhome life has become easier, with ‘Stella’ serving as a mobile office, restaurant and bedroom.

It’s dusk by the time I arrive at Nairn harbour and I drive around it to a big car park overlooking the sea, where the only thing banned by the multitude of signs is feeding seagulls. Braan, my collie, is my only companion, so I am relieved to have the company of another larger motorhome for a wild camp here. The morning dawns fine, with the sun soon breaking through high cloud and illuminating the wave-washed beach of pale yellow sand.

After breakfast, I start a walk from the harbour, passing the statue of a fishwife and following the promenade through parkland between West Beach and the town. Numerous information boards highlight Nairn’s wildlife and history; I learn that the town was called the Brighton of the north in Victorian times when people flocked here for fresh air and sea bathing. I pause at a viewpoint where volunteers regularly watch for the colony of dolphins that live in the Moray Firth. I don’t spot any dolphins but, further on, I see a gaggle of Brent geese feeding among rock pools. 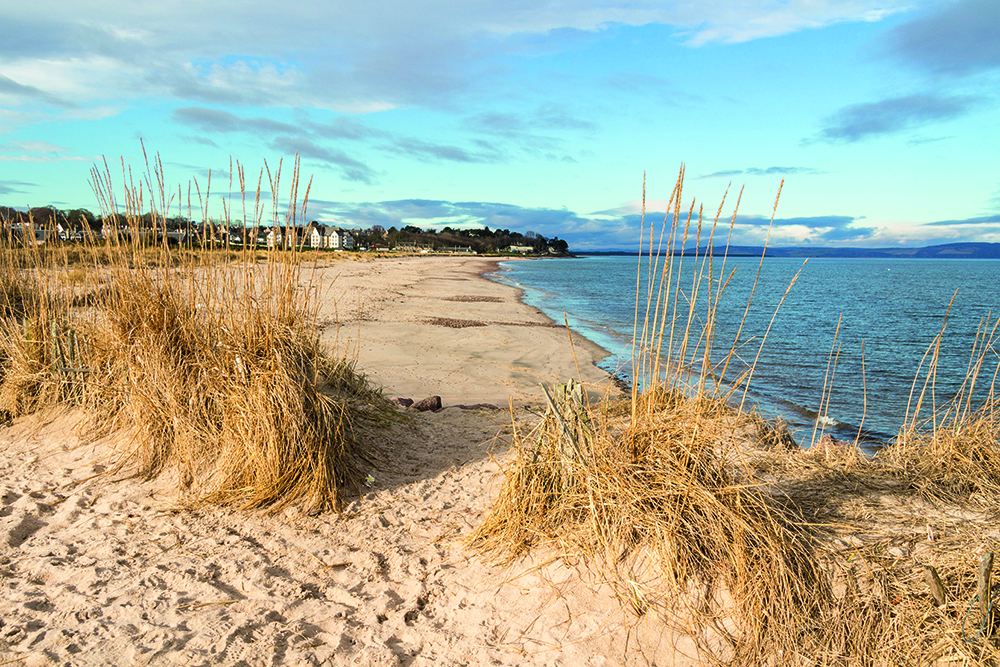 My return route is down the River Nairn, where snowdrops still line the wooded path. I glimpse a heron, dippers and ducks before a final loop around the dunes and vast sands of East Beach. This is not a place for agoraphobics, with an immense feeling of open space and dazzling light. Nairn has a relaxed, holiday feel that tempts me to linger, but I want to catch Connage Highland Dairy’s Cheese Pantry at Ardersier before it shuts. The shelves of the Cheese Pantry are piled high with delicious cheeses from its organic dairy herd and from around Europe.

Next day I take a longer walk in an area where tragic history lives on in the very stones. Starting from Culloden Wood, I do an extended version of the Culloden Battlefield Trail, passing two massive boulders on the way. One is the Prisoners’ Stone, where victorious government troops shot 17 Jacobite prisoners. The second is the Cumberland Stone, from where the Duke of Cumberland directed government forces during the battle. The duke is remembered as ‘Butcher Cumberland’ for the atrocities committed after the 1746 battle and his subsequent ‘ethnic cleansing’ of Jacobite Highland clans. My walk crosses the battlefield, passing between engraved stones that mark the mass graves of different clans. The huge and desolate moor is a poignant place with a memorial cairn at its centre.

By contrast, the nearby prehistoric burial site of Clava Cairns feels quite uplifting. It is amazing that structures built 4,000 years ago are still standing, thanks to their superb architecture and craftsmanship. This Historic Scotland site has three large cairns, each surrounded by a ring of standing stones. I walk inside the cairns and touch the rounded, lichen-covered stones, each carefully fitted into its neighbours. 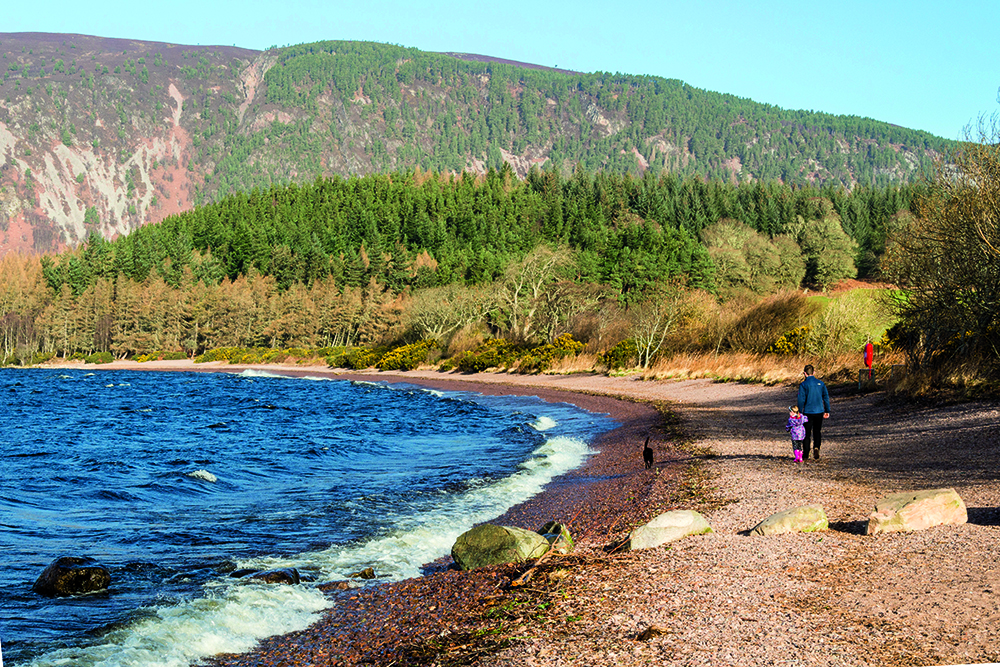 A tired Braan and I arrive at Loch Ness Shores Camping and Caravanning Club site in Foyers as the sun is setting. Once pitched, I watch as the light slowly moves up the steep hillside until only a few puffy clouds catch the last pink rays. Foyers is on the quiet, south side of Loch Ness. I reach it via Inverness, the last 12 miles on scenic single track road along the loch shore and with crags towering above. I appreciate the site’s excellent facilities with a lovely warm shower and easy servicing of Stella’s waste and water requirements.

A beautiful dawn encourages an early start and I am soon walking from the campsite, through Foyers cemetery and past a sad memorial to 22-year-old Jane Fraser of Balnain. She was engaged, but her fiancé died before their marriage. The obelisk marks the spot overlooking the loch where Jane used to sit gazing at her love’s former home, until she eventually pined away. I hope to spot an otter from the woodland path by the mouth of the River Foyers but, although Braan finds some interesting scents, I see nothing.

From the loch I weave uphill through the steep and scattered village to the Falls of Foyers. The high waterfall may not be as awesome as it was before some of the flow was extracted to generate hydroelectricity, but what remains truly spectacular is the gorge that it drops into. The sheer cliffs are topped by pines and the gorge zigzags through the rock as if carved out by a giant butter knife. After visiting two waterfall viewpoints I follow a path around the rim of the cliffs, enjoying ever-changing views and the sighting of a red squirrel.

Two tea rooms in Foyers means that I’m spoilt for choice, but I end up at The Camerons Tea Room and Farm Shop on the east of the village, where there is more room to park. It’s a peaceful spot cupped in a green valley and, during lunch, I gaze out over fields and a pond.

My afternoon walk involves another climb, this time through Farigaig Forest, a few miles farther north. The reward at the top is a splendid panorama over Loch Ness and the hill fort of Dun Deardail. The steep sides of the Great Glen hem in the 23-mile-long loch, the banks of which plunge sharply under water, making the bottom more than 700ft deep. That gives plenty of hiding room for the famous Loch Ness monster! 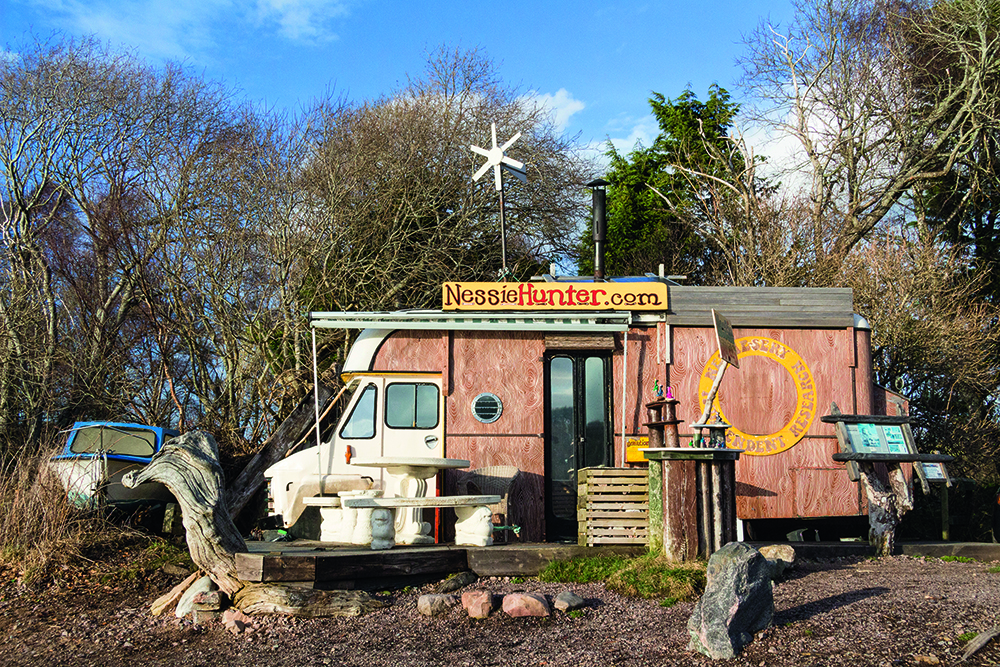 Early the next morning I come across the now-stationary motorhome of the ‘Nessie Hunter’. This is the base of Steve Feltham, who gave up his girlfriend, his job and his house in 1991 to become a full-time monster hunter. It is situated at Dores beach, near the north end of Loch Ness, where a stiff wind blowing down the water is driving waves onto the shingle. Wrapping up well, I set off with Braan along the bay and around wooded Tor Point. From a little pier, I have a view a mile across the loch to the far shore, where the busy A82 road runs below a sheer slope of scree that’s softened by a thin mantle of pine and birch.

After the short walk, I find that The Dores Inn is open and allows dogs in the bar – ideal for a second breakfast of coffee and bacon roll. Then I steel myself to drive Stella through Inverness, which always seems busy with traffic. The River Ness, which flows out of Loch Ness, makes an attractive centrepiece to the capital of the Highlands before it reaches the sea.

I make an early start to Cromarty because it’s forecast for cloud later. I have not previously been further north on the Black Isle than Rosemarkie and Fortrose, where I’ve had close views of dolphins feeding on the fast-flowing tide at Chanonry Point. My immediate impression is of a very peaceful backwater, literally at the end of the road. I soon find that there is much more to Cromarty. The small town has a wealth of historic buildings and a beautiful little harbour, dating from its time as a medieval burgh. At one time this was a busy port, trading with the Low Countries and Baltic states. It is strategically placed at the mouth of the sheltered Cromarty Firth, the entrance of which is guarded by two headlands: North and South Sutor. 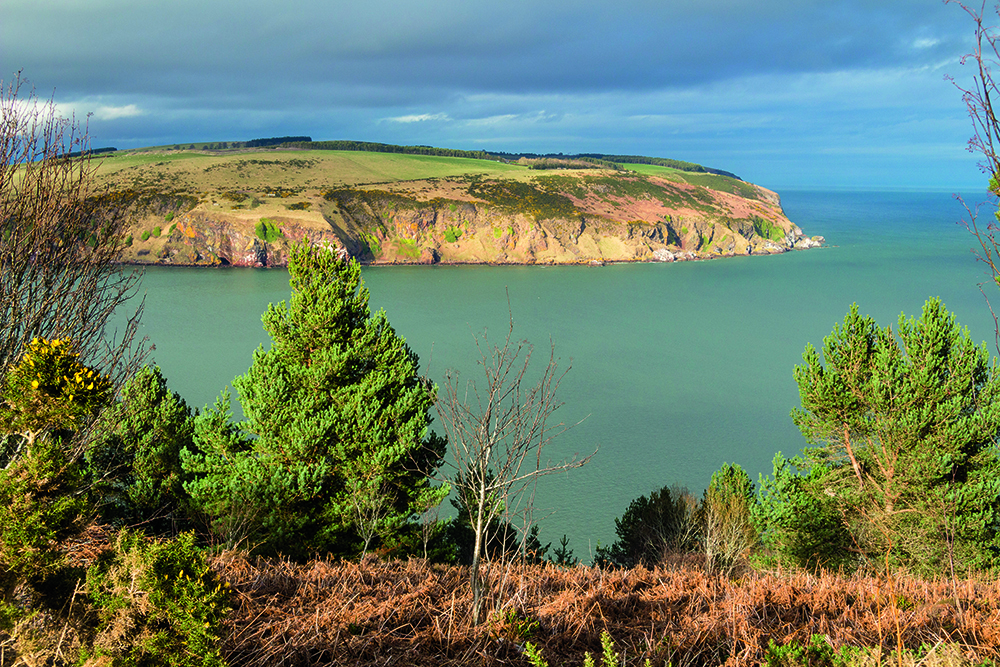 My walk here takes me past Hugh Miller’s Birthplace Cottage and Museum. Miller was a local stonemason who developed an interest in geology. On the shore he discovered fossils that enabled him to persuade Victorian scientists that the earth was much older than previously thought and that, over the eons, it had been inhabited by many species now extinct. Miller realised that local outcrops consisted of sandy sediments eroded from even older rocks and coined the name Old Red Sandstone for these formations.

I come into close contact with the rust red rocks at McFarquhar’s Bed, a remarkable sea stack at the foot of cliffs. Waves slosh through a cavern under the rock pillar, which is attached on one side to a high arch resembling a whale’s jawbone. Braan plays on the water’s edge as I stroll across the beach of grey and red pebbles, many wonderfully patterned with zigzags and rings. On the far side I scramble into the Gypsies’ Cave, a slit along a fault line between strata of folded red and grey rocks. It seems that both McFarquhar and the gypsies were smugglers, but their exploits have been lost in the mists of time.

From high up on the point of South Sutor the view is terrific, with North Sutor’s cliffs highlighted by bursts of sunshine. I spot several oils rigs moored near the fabrication yard within the Cromarty Firth. Across the broader Moray Firth I can see to Nairn, where I started my trip. If I could hitch a ride on a dolphin, I could travel full circle! And, yes, the weather was perfect – the mild climate of the area around Inverness gave me brilliant conditions for researching walks, with the sun shining every day to allow me to photograph the splendid scenery.

This feature was originally published in the March 2018 issue of MMM magazine. Want to read more like it? Subscribe to MMM magazine today for your monthly dose of motorhome travel inspiration.