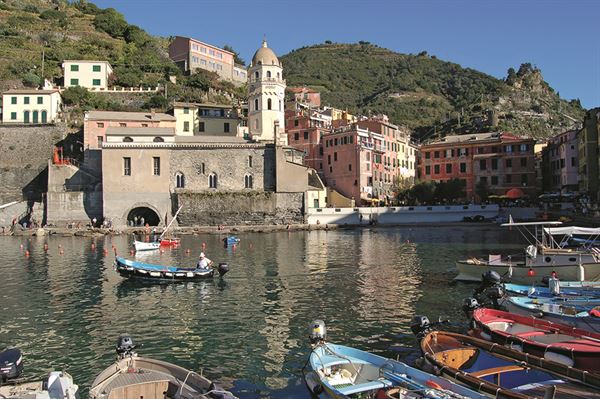 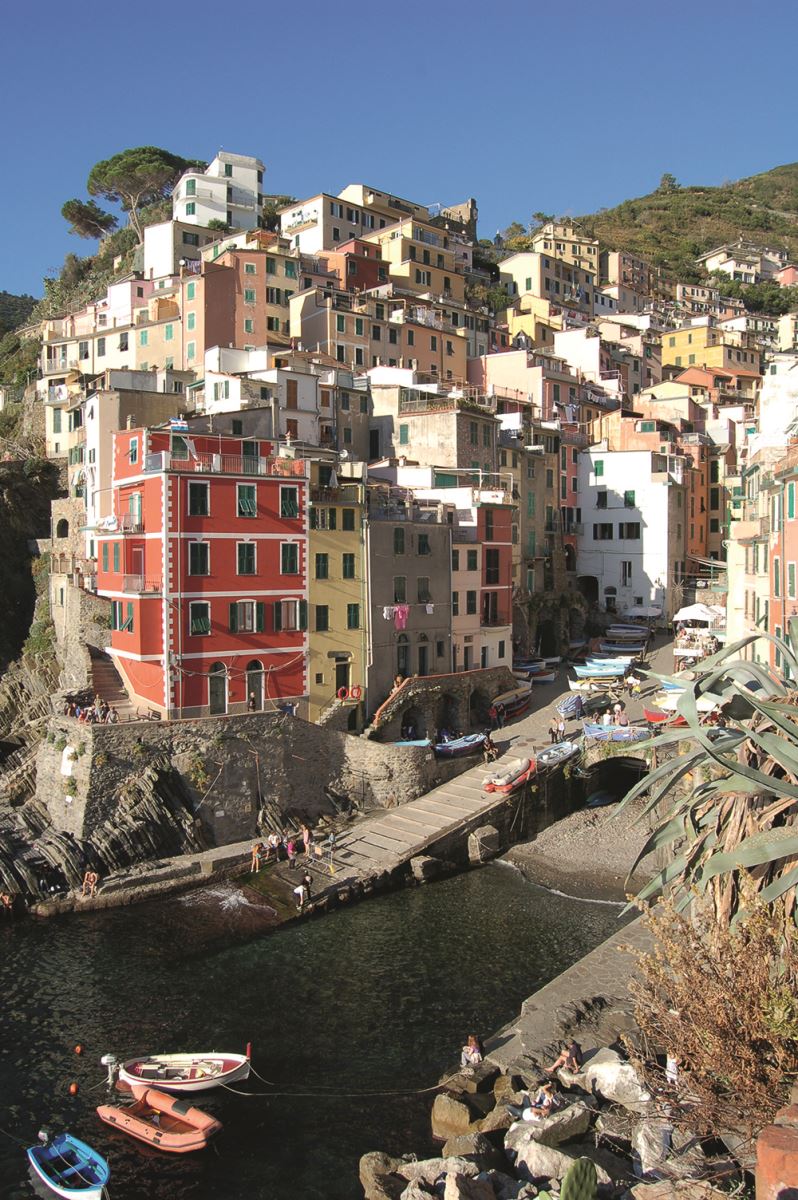 The Cinque Terre is five rainbow-hued villages clinging to impossibly steep cliffs above a shining blue sea. No roads, no cars; merely a maze of precipitous paths connecting the communities. A hiker’s heaven; a spectacle beyond belief and a UNESCO World Heritage Site. We’d heard about it, but had never given it a thought. Now, we were going to be not much more than 100 miles away in Piedmont. Happily, we’d allowed ourselves a few extra days for the trip and had thought about visiting the mountains of the Jura on the way back. Forget all that; we had to go to the Cinque Terre!

Surely late October was a good time, we thought; it should still be warm on that southern coast and the guidebook-threatened crowds of summer would have gone home. Right with the first premise, totally wrong with the second! The sun was shining brightly that Friday afternoon while we wound our way down the green valley leading to our chosen campsite. As the Cinque Terre is traffic-free, the idea is to base yourself up or down the railway line and commute from there.

We were headed for Deiva Marina, where the campsite – a couple of miles from the station – was operating a frequent shuttle bus service. At reception we were advised that it would have been best if we had booked, but we were really lucky because there were just two places left on the site. Surely not for a weekend in late October? It transpired that we had missed a major trick. All Saints’ Day – a national holiday in Italy – was to fall the following Tuesday and, as the Monday was a holiday, too, it was making the perfect short break, all enhanced by the weather. We wedged our ’van between two rather substantial trees at the site entrance (the more desirable of the vacant plots) and took the shuttle bus into town.

Wandering along a very modern esplanade there was hardly a soul in sight and there was no hint of what was to come. Thinking to speed things up for next morning, we called into the station. The lone ticket machine looked innocent enough, but it had a wicked streak – it printed the letter below and to the left of the one you wanted. Think Bletchley Park! Some 20 minutes had passed before we cracked this one and worked out that Monterosso al Mare, our desired first destination, was actually spelt K0. Next morning, the clamour in the station foyer confirmed that this machine had lost none of its idiosyncrasy overnight. I don’t know if anyone got tickets, but they all boarded the train anyway. The train was crowded, Monterosso was crowded, the tourist office where we queued for a day pass was crowded. Alright, I’m not going to use that word again, just take it that it applies throughout! It was also incredibly beautiful. 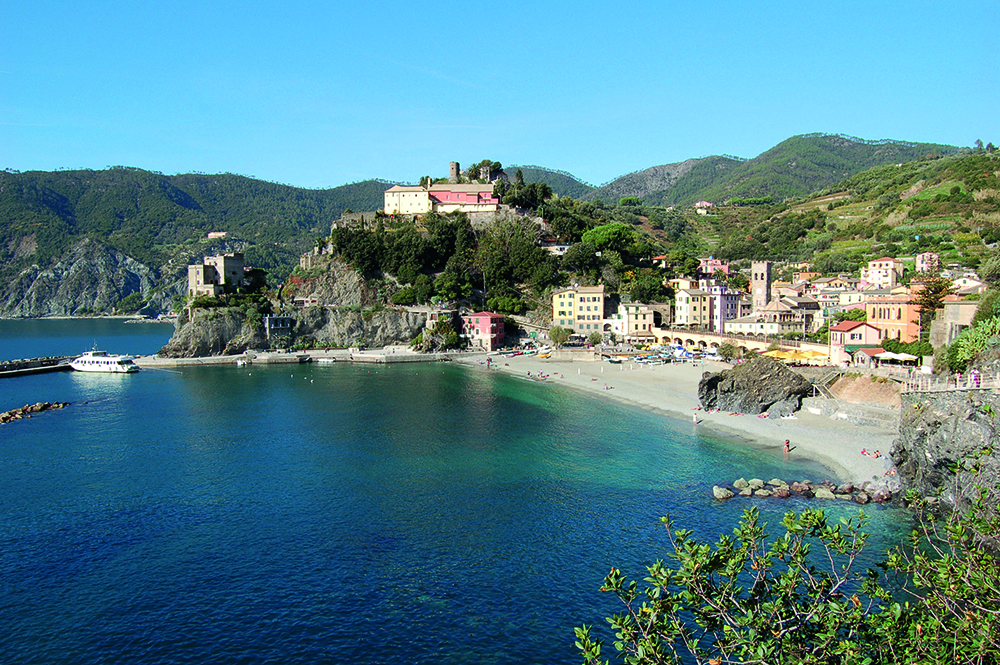 Monterosso is said to be the least typical of the villages but, even here, the golden sands, pastel-shaded buildings and tree-clad cliffs nose-diving into a sparkling sea were a magical combination. We wandered along a seafront lined with colourful market stalls, round a cliff and past thriving narrow commercial streets to the far end of the bay. The plan was to walk over to the next village, Vernazza, on the Sentiero Azzurro (Blue Trail), the best-maintained and most popular path of all those on the cliffside. The path once served all five villages. Unfortunately, a landslide in 2011 blocked it after the third village, Corniglia – and it has still not been reopened.

There’s a hefty toll for walking this path (that’s why we needed the day pass). Once through the entrance gate we climbed steps; not 100 or even 200, but probably something in four figures. There were so many I’m not sure anyone could count them. In between, there were little stretches of steep, winding, rocky path. At every turn, that heavenly view extended just a little bit farther. Just as we were thinking we’d reached the top, the path ducked into a ravine or dived around trees before coming up again – and so it continued all the way. 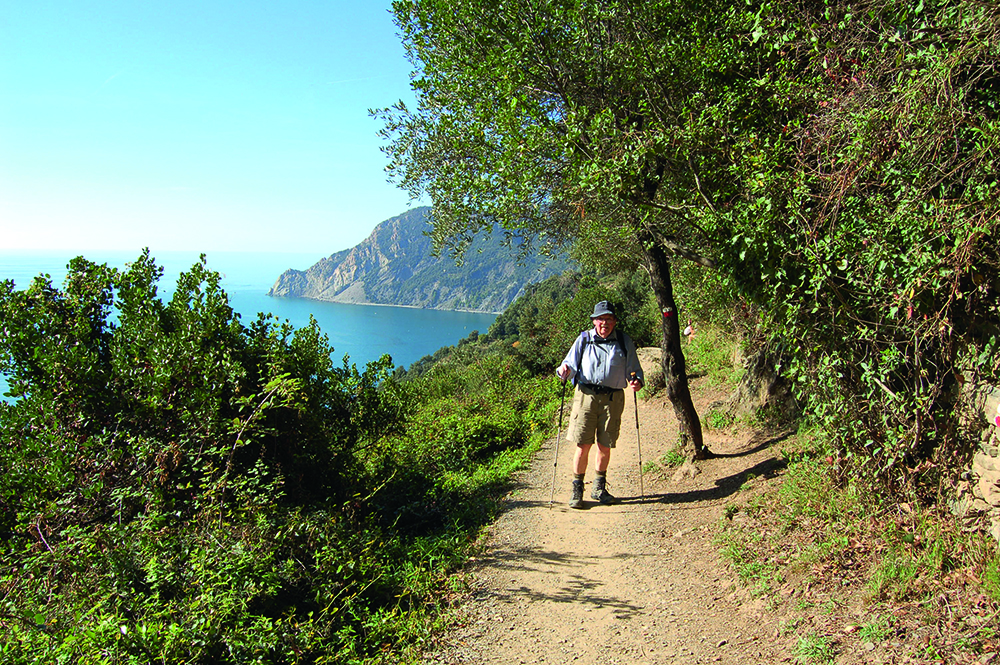 At one point an elderly man was selling fresh orange juice, a cable dropping down from some unknown source hundreds of feet above us to power his orange press. Farther on, a stall of jewellery was laid out. Goodness knows how that got there. Nimble-footed youths passed us frequently whilst we ambled on, mesmerised by the panorama but watching our feet at every step. I didn’t see Eric fall, but it wasn’t a good idea.

The bird’s-eye view coming down into Vernazza is one to die for; houses clustered in pink and yellow, a clifftop castle, cheerful cafés with bright umbrellas and a crooked finger of a harbour wall shielding myriad brightly coloured boats. Once you have seen it, you will recognise it on many an advertisement for Italian holidays. We sat beside that harbour for lunch and then wandered a tangle of near-vertical streets and tiny piazzas, each with its own exclusive prospect. 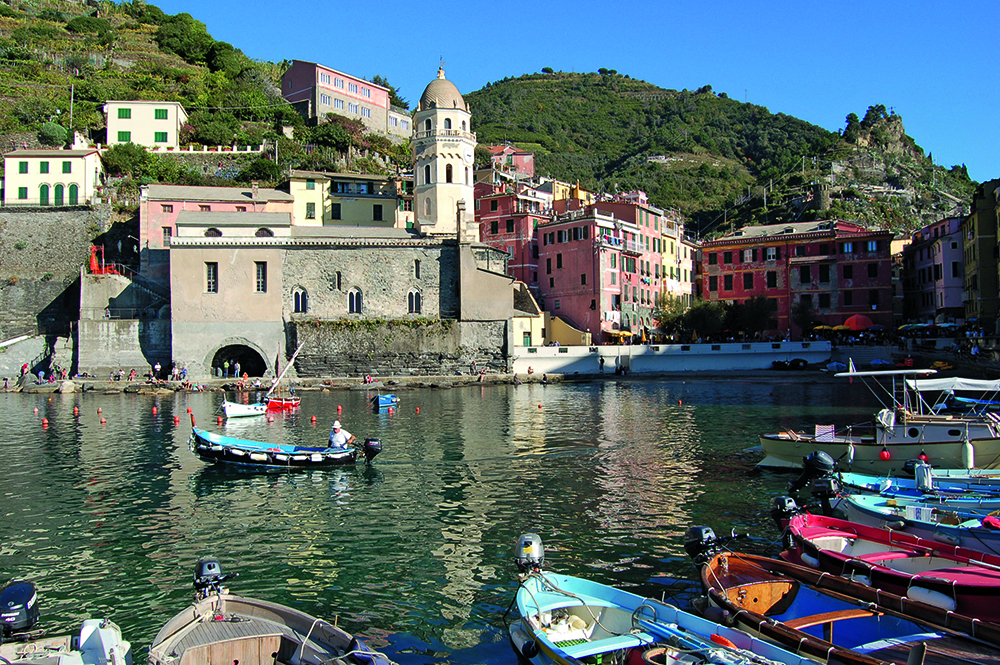 From Vernazza we took the train to Riomaggiore, the last and most southerly of the five villages. Each village has its own peculiarity and that of Riomaggiore is surely an extra dose of colour. Bright reds and greens and oranges have joined the pastels, every shop spills vivid contents into the street and I swear that even the shades of the many flavoured ice creams are brighter. Down at the bottom of the village the tiny cove was quite enchanting, but the steep climb to the top was rather less so for our tired limbs. We took ourselves back to Deiva Marina and, sure enough, that shuttle bus was there to meet the train.

Next day there were two more villages to see. Bright and early we arrived in village number four, Manarola. This we voted was our favourite. A panoramic path runs up the cliffside above the harbour and there are seats under balconies dripping with bougainvillea. Here someone had laid out the most magnificent display of Italian leatherwork we had ever seen; dozens of purses of different animals in multiple colours and a gallimaufry of brightly hued satchels.

From there we walked to the top of the village where Eric opted for a rest on a convenient seat, while I attempted the path to the sanctuary above. Each village has a sanctuary, a little church on the clifftop above. This one, the sanctuary of Nostra Signora della Salute, was supposed to be particularly lovely. I climbed and climbed and climbed, up through vineyards with privileged views and, I’m sorry to tell you, I gave up. It was just too far and taking too long. By the time I returned, Eric had discovered that there was a minibus to take you to that sanctuary, the only vehicle allowed there. He’d also found a church with a sixteenth century triptych and attempted to vote in an Italian mayoral election. Don’t even ask about that one!

Corniglia, the middle village and the last for us, has no harbour but simply sits on a cliff above the sea. It also sits on a cliff above the station! To reach it from there you either take a shuttle bus (bursting at the seams in this case) or climb something called the Lardarina. If that sounds like a little ladder it certainly isn’t, because this one has 382 steps. We opted for the crush on the shuttle bus and roamed through Corniglia’s particularly restricted alleyways to the fortress at the top of the hill, a spot with truly fabulous views along the coast.

Back down Lardarina (no problem going that way) we wanted a last look at Manarola. Its buildings are reputed to glow orange as the sun sets at the end of the day. So they do and, though it was not as photogenic as I might have expected, it was still magical. More was to come. Sitting waiting for our train at Manarola station, we watched the sun sink into the sea in front of us. How often does that happen? A layer of cloud usually appears at the last minute. It was a great end to the day.

There are so many big names on that coast near the Cinque Terre (Portovenere, Lerici, Portofino, Santa Margherita, Rapallo) that we felt we had to see just something of it before turning for home. At 10am there wasn’t a parking space left in Rapallo. I don’t think you could have parked a bike, never mind a motorhome. In the end, we parked where we shouldn’t have done and, taking it in turn, made quick circuits of the seafront before beating a retreat. This coast and its high summer fever were not for us. We should go home.

This feature was originally published in the January 2018 issue of MMM magazine. Want to read more like it? Get monthly motorhome travel inspiration by subscribing to MMM magazine.