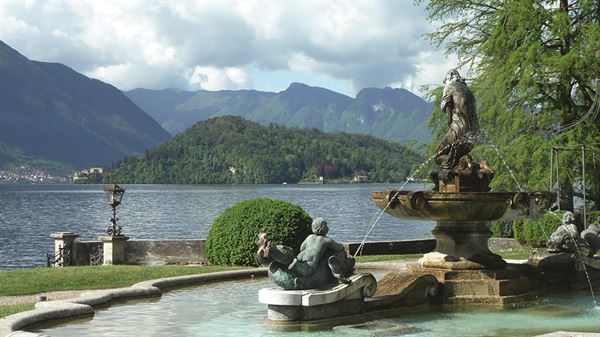 Our approach through the Alps and the Simplon Pass to the Italian lakes of Como and Maggiore provided tunnels, sweeping roads and magnificent bridges. Mountains were close on either side, with waterfalls cascading from heights above the mist. Azure waters and ochre-coloured villas with glorious gardens, tinged with the glamour of James Bond and George Clooney, beckoned. 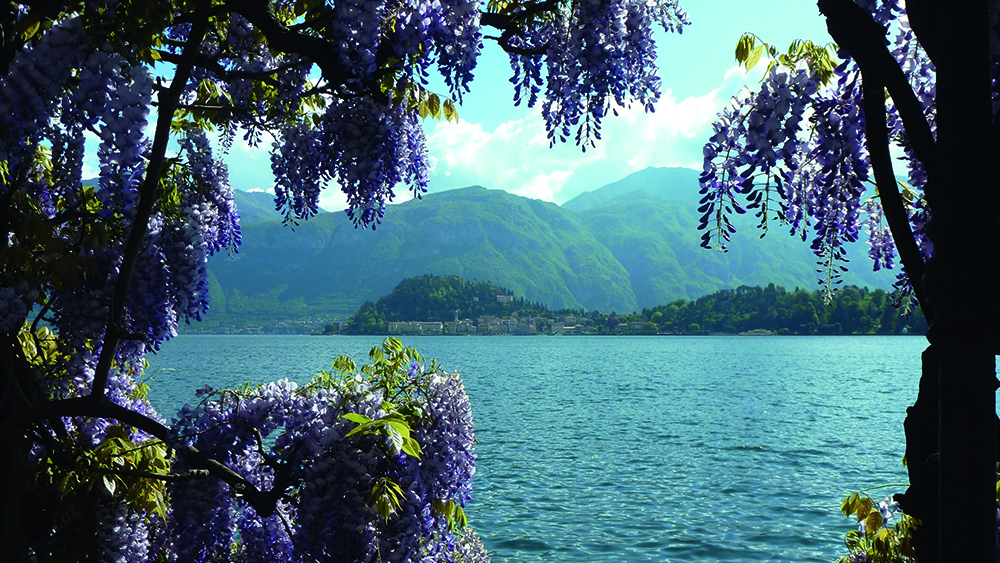 Our first impression of Camping La’Vedo at Lenno, on Lake Como’s western shore, was mixed. It seemed as if all of the local families were here. We powered up the steep grassy bank to the terrace for the last pitch. We were only 400 yards from the lake shore and could join the Greenway del Lago di Como from a gate at the back of the site. This is a well-marked trail offering an easy, fairly level walk along lakeside paths and through quiet villages. We passed by some extraordinarily elegant villas with wonderful gardens glimpsed through olive groves and hedges of wisteria in full bloom.

Yet, behind all this beauty and richness is a dark backdrop: nearby is the Villa Belmonte where, towards the end of WWII, Mussolini was shot dead, along with his partner, Claretta, after being caught fleeing to Switzerland. The roads clinging to the lake shores are thin and crowded and go through frequent tunnels. As they do not give the driver a chance to glance from the straight and narrow to admire the views, we found local transport the best option.

You can crisscross the lake at reasonable cost, getting to see the villas and their gardens from the water. By combining ferries with other public transport we could stitch together a variety of enticing circular routes. The ferry back to Lenno crosses the lake to Bellagio en route; what a lovely introduction to a place! 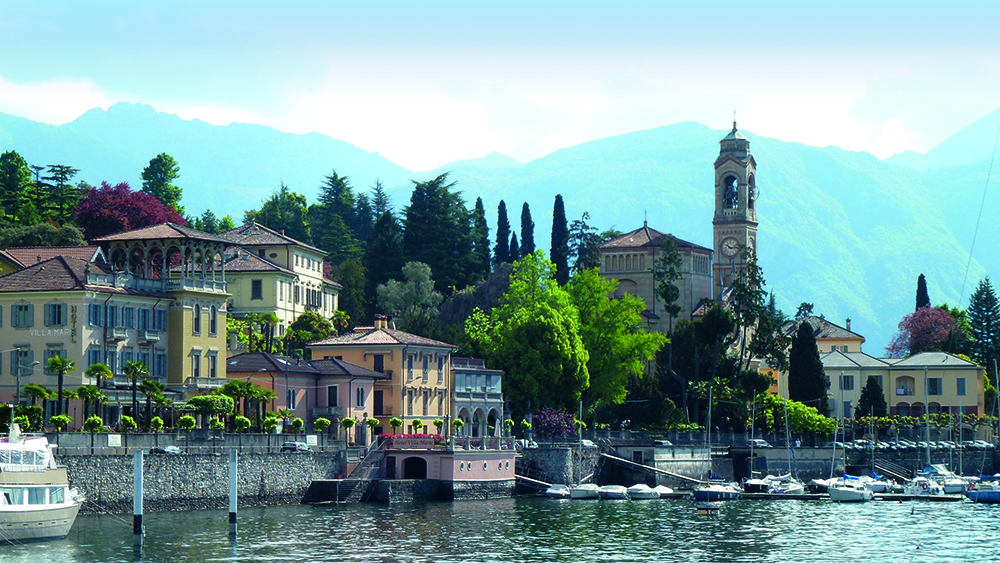 Next day, a strong northwesterly wind was picking up and it was clear, but cold. Nonetheless, Bellagio – many people’s idea of a ‘dream’ Italian lakeside town – beckoned from across the sparkling waters, which were now flecked with white horses. We wandered Bellagio’s quaint, narrow streets lined with shops, buying silk scarves at surprisingly reasonable prices. When we returned to the quayside, all the ferries had been cancelled due to unsafe conditions. How to return to Lenno? Fortunately, the public transport here is good. A bus arrived to carry us down the eastern shore into Como and then back up the western side. And what a ride to Como it was!

It was a much calmer bus that carried us north to Menaggio to explore the valley of the River Sanagra, which flows into Lake Como. The valley route winds between sumptuous villas and then more humble hamlets until you arrive in the national park, Parco della Val Sanagra. The path took us through alpine meadows and alongside the bright, tumbling stream of the Sanagra. We passed dilapidated buildings crumbling in the sunshine, old mills, lime kilns and silk works and barns, chestnut stores and animal enclosures for the herders who took flocks onto the mountains in spring and autumn.

We trod ancient mule tracks, characterised by deeply inset cobbles. Often we were accompanied by swallowtail and orangetip butterflies. The path had some difficult sections with huge boulders blocking the way and steps cut into steep rock – but we managed it! Returning along the other (and easier) side of this narrow valley brought us through villages with cobbled streets and in to piazzas where the central fountain by the church was the only sound. 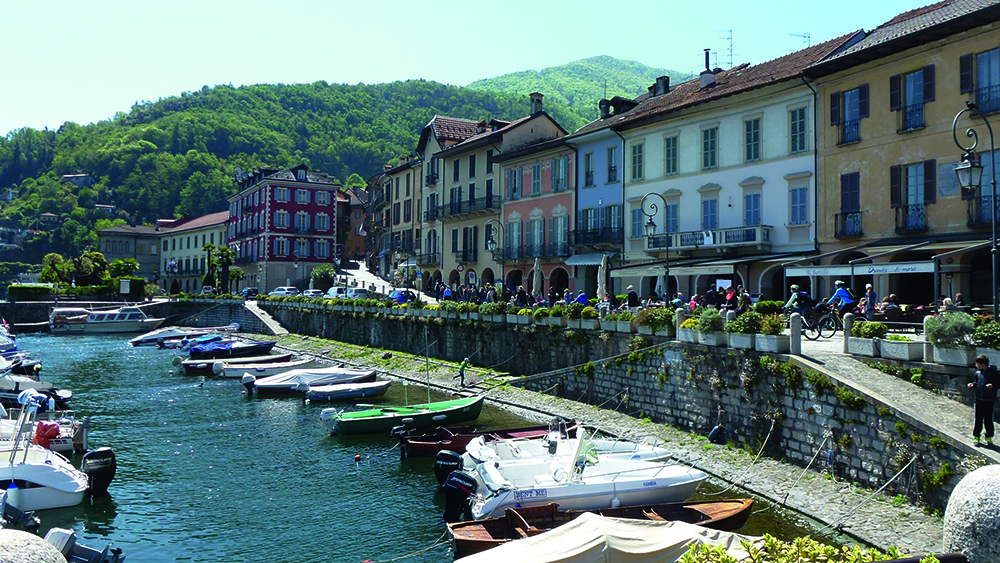 Naggio is perhaps the most remarkable and fascinating of these places. What stories it could tell! In the mid-1940s, these same old mule paths into the hills were also used by escapees to Switzerland (which is only a few miles north) and by guerrillas, resistance fighters, partisans and other factions. They were fighting the Germans, the British and fellow Italians – communists and fascists struggling against each other towards the war’s end. Behind the beauty of the scenery is a complex and sad tale of infighting and deep turmoil.

Villa Balbianello is only a 10-minute walk around a sylvan promontory from Camping La’Vedo. Rarely have I known a short, early morning walk bring such rewards. The gardens are on steep slopes and terraces, which surround the villa and all with the backdrop of the lovely lake and surrounding mountains. Luxuriant plantings and sculptured trees frame the views. Stone figures stand as if on guard. It’s a place that will live long in my memory and those of James Bond fans, too. For it is in these gardens that actor, Daniel Craig, recuperates in Casino Royale after being tortured by ‘Le Chifre’, resting on a sun lounger and being tended to by Vesper.

If you want to splash out, there is another way to approach Villa Balbianello and that’s by motorboat from around the headland at Lenno. That way you experience the privilege of walking up the grand staircase from the lake. We were to find more beauty and history at Lake Maggiore, arriving at Camping Valle Romantica in Cannobio after a leisurely short drive west skirting to the north of Milan. The site lived up to its name, set in a tree-covered valley and beautifully tended. Magnolias, azaleas and camelias were in full bloom. The welcome was friendly, the setting superb – and the price high.

A cyclepath/footpath led to the delightful town, whilst other paths headed into the quiet countryside. We pedalled a mile to Cannobio, a town of old cobbled streets, some good shops – including a magnificent cheesemonger – and a lakeside frontage of restaurants lively with the hum of contented diners looking out over Lake Maggiore and the mountains. 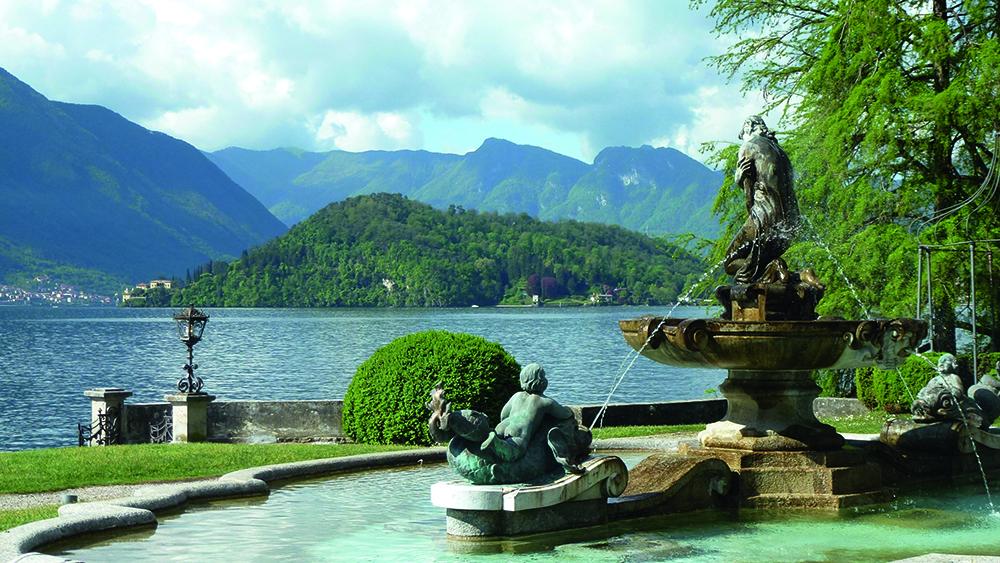 Across the bridge by the campsite’s entrance, over the River Cannobina, lies another ancient mule path laid with small cobbles. At times very steep, it climbs the valley side on its way to upland pastures and quiet hamlets. This is the Borromeo Way, named after a local sixteenth century bishop who visited his flock via this hillside path. Several dilapidated chapels dot the way, their frescoes still bright despite some being roofless. Sweet chestnut trees line much of the path, cultivated for the nuts to be milled or ground. High waterfalls tumble from the hillside and flow beneath the path.

Next day, we took the hydrofoil to Cannero, where a path, steep at times, took us into the hills and with delightful views to the lake. The hamlet of Carmine Superiore was particularly memorable; narrow alleys, no cars, a road of bedrock and a frescoed church with a stunning view over the lake. The path flattened out and we spotted overgrown ditches; the remains of WWI trenches and vestiges of the Cadorna Line, which Italy built in fear that Germany and Austria would attack via Switzerland over the Alps. Ernest Hemingway’s A Farewell to Arms describes some of the devastation WWI brought to this area, as much of Hemingway’s time during the war was spent in and around Como and Maggiore.

Our last day on Lake Maggiore was spent riding the Lake Maggiore Express. We caught a ferry in Cannobio up the lake to Ascona and crossed the border to Lucarno in Switzerland. This is the part of the lake that Hemingway describes rowing up with his girlfriend to escape from the Italian authorities. From Locarno it was a short walk to the station for the train to Domodossola. This is a magnificent rail journey climbing through the mountain pass of the Valle Vigezzo, where it’s also known as the Centovalli Railway because of the 100 side-valleys that join it. The track crosses waterfalls on spindly bridges and viaducts, passing through short tunnels and looking down on rocky rivers. The best views are seen by sitting on the train’s southernmost side although, after it passes back into Italy, the valley widens and views are good from either side.

At Domodossola we caught the Milan-destined train to Stresa on Lake Maggiore. The station was clearly once a grandly decorated building but its art nouveau features are now crumbling and neglected. It’s along the lakefront where Stresa’s previous grandeur is best remembered.

Our time on the Italian Lakes was ending and our ideas of the region were changed. Excellent walking along ancient mule tracks through sublime landscapes of alpine pastures: yes. Quiet hamlets high in the hills explored: yes. Glamorous villas and gardens set against the backdrop of shimmering water: yes. Yet we’d also learned and seen unexpected things of the region’s difficult and, indeed, violent past as so richly described by Hemingway.