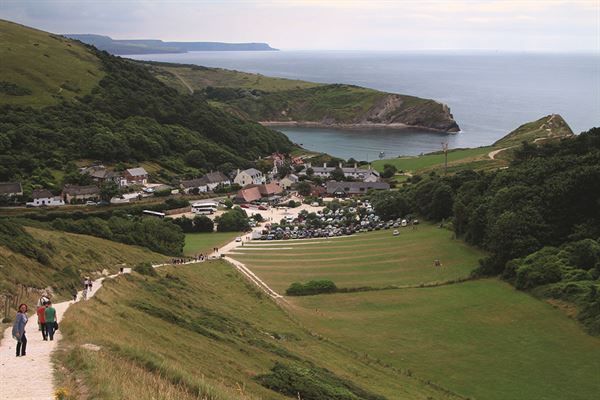 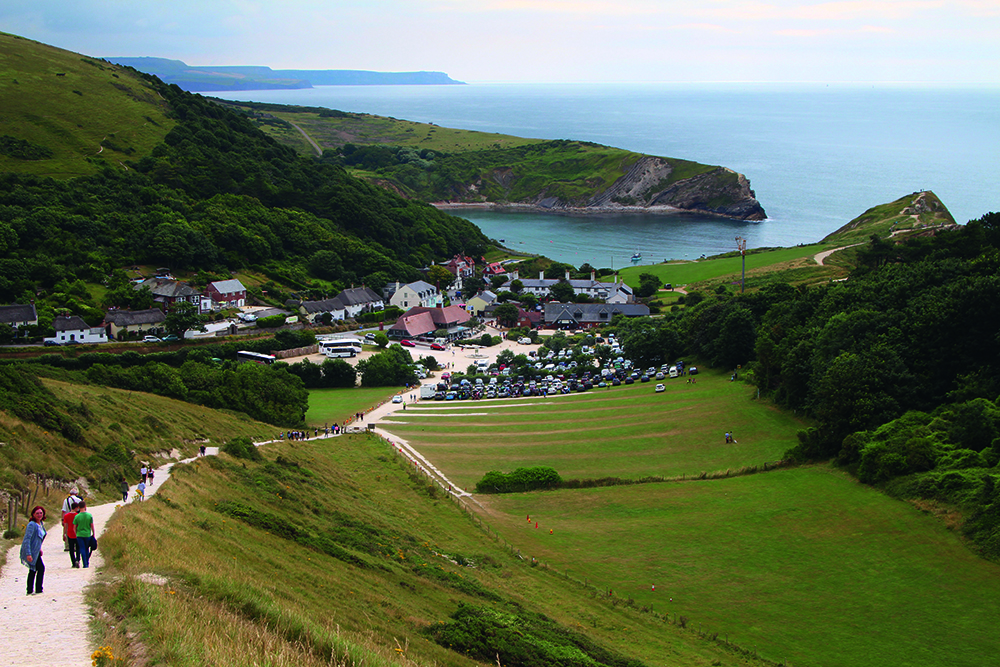 Of course, we knew that Dorset would be very busy at the height of summer, so we were pleased to see that Lulworth Cove was ready for the onslaught of visitors and there was plenty of parking space in the surrounding fields. As it was hot and sunny and we knew that we would stay for the whole day, we didn’t mind paying the £9 parking fee.

The walk leading towards Durdle Door starts from directly behind the car park and we had some magnificent views of the coastline along here. Looking down on the bathers enjoying their swim, through and around the famous ‘door’, we were quite envious and relished the thought of our planned swim a little later in the day. I had read somwhere about a nearby wild swimming spot at Stair Hole and so we had planned to take a dip there. 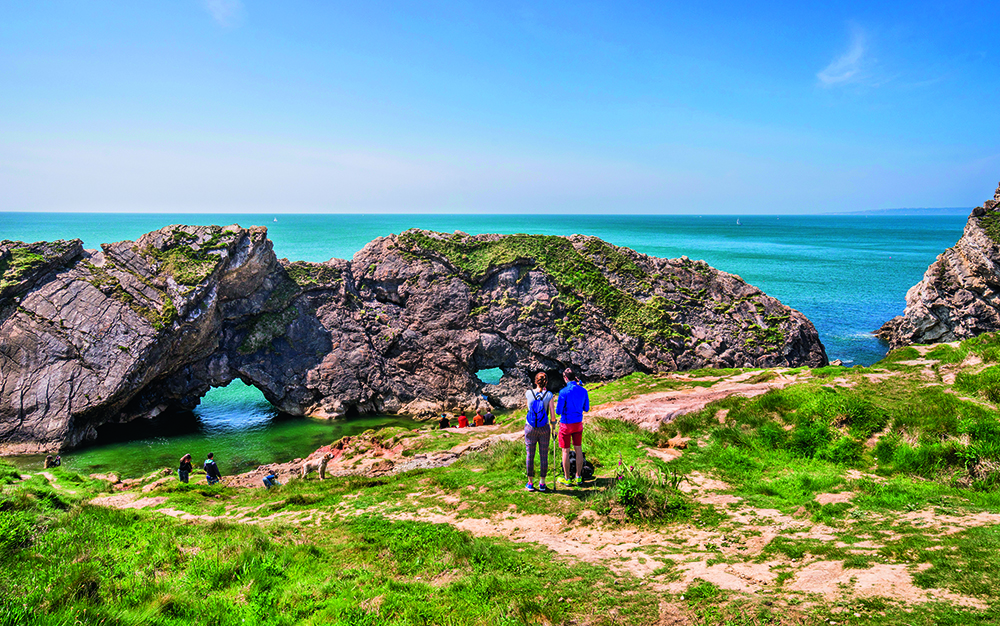 Stair Hole can be accessed via kayak, just around the headland from Lulworth Cove, or on foot just a couple of minutes’ walk away from the car park. A quick and rather inelegant scramble down the cliffs took us to a wonderful area of distorted sea caves and tunnels, which have created a shallow lagoon with three routes leading out into the open sea. It was a rather surreal experience swimming under the arches and into caves, chasms and through tunnels, green with the luminescent light filtering through the rock. It felt quite far from the madding crowd – we were in Hardy country, after all! We were lucky to have calm waters in which to swim as it could be dangerous in the wrong conditions.

The geology of the rock here is fascinating and the limestone rock above Stair Hole is known as the Lulworth Crumple. This is a fine description as the rock appears to have folded onto itself. Sitting on the pebbly beach at Lulworth Cove a little later, we enjoyed watching the boats coming and going and couldn’t resist taking a final swim during the late afternoon before finally returning to our motorhome.

Never before had we visited Portland Bill, our next stop, on such a glorious day! On previous visits, we’ve experienced the sea crashing intensely against the rocks and the wind howling around us. Although it was not quite so dramatic, this occasion showed us the true glory of the coastline and surrounding area. As we’d arrived at Portland Bill quite early in the morning, we were fortunate to be able to park the motorhome in one of just a few larger spaces. Later on in the day we saw several larger units turning back to seek suitable parking elsewhere. 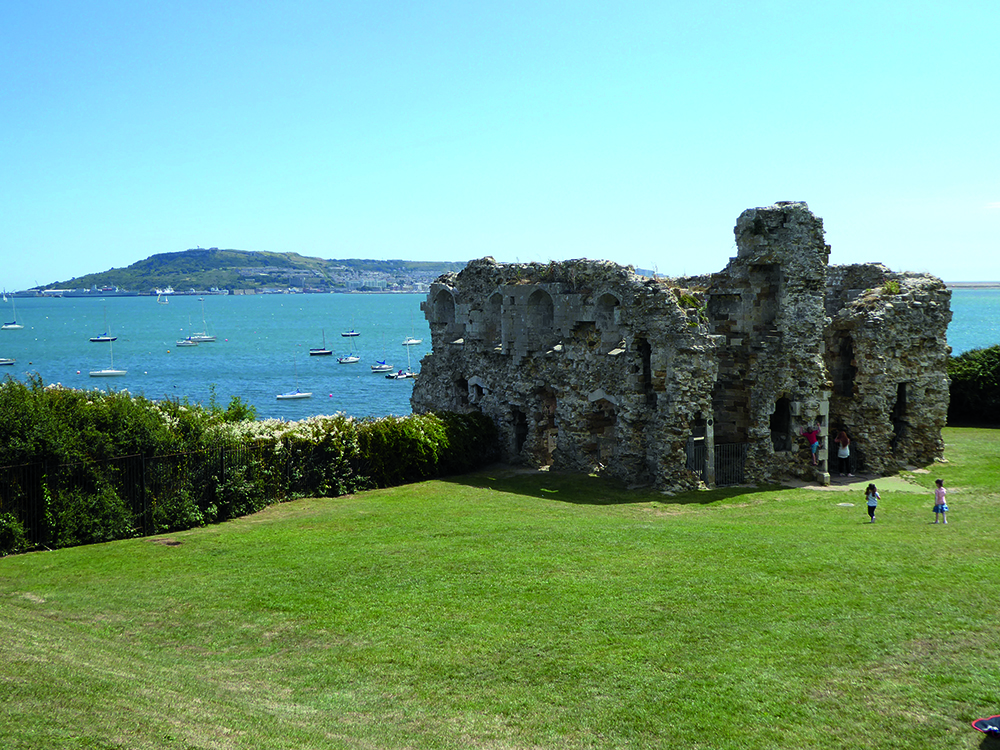 Strolling along the coastline, we watched all manner of boats sailing past and enjoyed the disparity of the beach huts dotted haphazardly along the shore. Their owners were also appreciating the weather to sunbathe, paint their huts or climb down the rocks to swim. It was interesting to watch some boats being worked on and then craned out onto the water as we wandered by. Although they’re not a beautiful sight, the quarries on Portland show the magnificence of the stone that is used so extensively – think Buckingham Palace, the Tower of London and St Paul’s Cathedral for a start.

We’d been advised to visit a little cove that is largely overlooked by visitors. There are not many coves in Portland, so Church Ope Cove is decidedly popular amongst local people. It’s near to the Portland Museum and we had no problem parking our motorhome on the road, then descending through woodland and a stone arch. Stopping to look at the intriguing ruins of the first parish church of Portland – the thirteenth century St Andrew’s – we wondered about the so-called Pirates’ graveyard. This was complete with the distinctive skull and crossbones carved into many of the headstones.

Protected by cliffs on three sides, Church Ope Cove was, apparently, a popular smuggling beach; it is also thought to be the location of the first Viking attack within the British Isles, in 789AD. We admired the beach huts perched on the cliffs as we made our way down. Such is the seclusion of Church Ope Cove that we felt rather intrusive as we walked past them to the beach. Not wanting to leave Portland just yet, we decided to take our bikes out to explore a little more. We parked for just a couple of pounds in Victoria Square, where there was lots of room.

With the bikes off the ’van, we chose to follow the Rodwell Trail with Chesil Beach and Fleet Lagoon on one side of us and Portland Harbour on the other. This route led us to Sandsfoot Castle, with its colourful gardens and scenic views across the harbour. The castle was built on the orders of King Henry VIII in 1539, as one of a pair. We were surprised to learn that the ruins were purchased in 1902 for just £150! We paused for a moment on our return ride to stroll along some of the magnificent stretch of Chesil Beach, which goes on as far as the eye can see. Well, it is about 18 miles long, running from Portland to West Bay.

In a completely different way, Poole harbour is also lovely for a wander around, if only to admire the magnificent yachts that are built here. We parked on Harbourside 1 car park, where there are lots of suitably sized spaces for motorhomes and it is just a short walk from the harbour.

As the weather became a little inclement, we popped into the Poole Pottery on the Quay shop and studio and watched as a woman worked on a jug. Further inland, near the market town of Wimborne Minster, we came across an Iron Age hill fort, Badbury Rings, which we reached along a straight and beautiful avenue of beech trees, one of several Roman roads around the rings. The National Trust now owns Badbury Rings and it wasn’t until we walked in and among the mounds, using the chance to walk our collie, Geordie, that we realised just how vast it is. The site dates from around 800BC and was in use up until the Roman occupation in 43AD. We were treated to some fabulous views from the high ramparts. The area is also well known for its display of orchids in the summer. 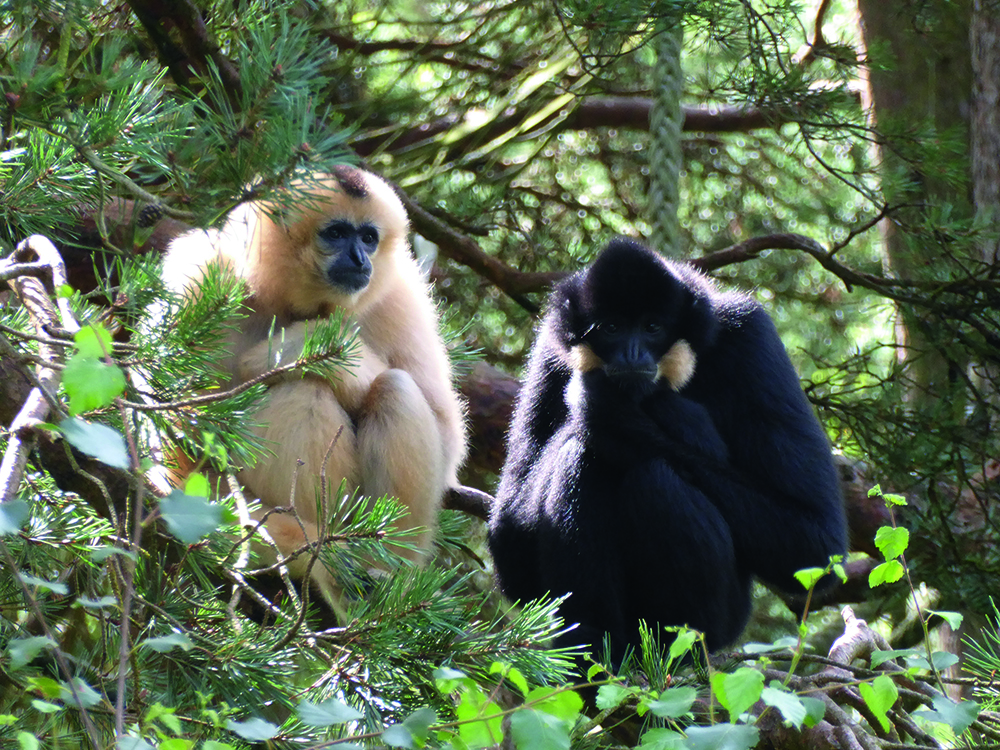 Monkey World, near Wool, is not for the faint-hearted during the school holiday period. I think my husband, Keith, may have had an inkling about this as he took himself off to The Tank Museum at nearby Bovington, having dropped me off at the ape and monkey sanctuary and rescue centre. Conveniently for us, both The Tank Museum and Monkey World were within a very short drive of the Hunter’s Moon Caravan and Motorhome Club site where we were staying.

Monkey World claims to be the largest primate rescue centre in the world and houses more than 250 animals from 20 species. One of the main aims of the centre is to stop the worldwide smuggling of primates from the wild. My favourite part of the day was watching the gibbons swing high up in the trees, disappearing from view and then reappearing to chase each other from tree to tree.

Before heading home, we went to explore Hengistbury Head. We had to park some way away, as there is a height restriction in the nearest car park and there is no parking allowed on the roads for more than an hour or two, which wasn’t long enough for what we wanted to do. We enjoyed our circular walk looking right out to The Needles on the Isle of Wight and across Stanpit Marsh Nature Reserve and the large, natural harbour and on towards the cathedral in Christchurch.

Interestingly, this part of Dorset, in some man-made ponds, is home to the natterjack toad, one of Britain’s rarest creatures. Unfortunately, we visited at the wrong time of day to see these toads, but the weather was ideal for the adders, which we saw basking on some of the slopes.

Walking up higher afforded us views across the heather of the nature reserve and the birdlife there, before we descended again to join Mudeford Spit. Here, we walked on glass-like white sand past the beach huts. A ferry takes visitors across the narrow harbour entrance, but we chose to continue along the lower path, boarding the land train a little further along. This returned us to the start of our walk and to the Hiker Café for a welcome cup of tea.

Although we visited a very popular area at a very busy time of year, we managed to find quiet areas to explore and enjoyed some amazingly sunny weather to boot – and that’s always a bonus!

This feature was originally published in the February 2018 issue of MMM magazine. Want to read more like it? Subscribe to MMM magazine for your monthly dose of motorhome travel inspiration.