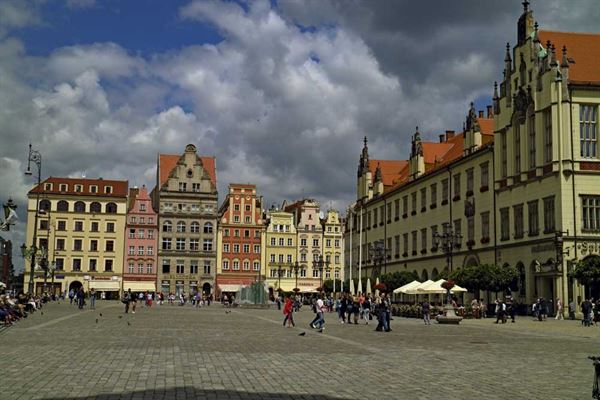 We’d been to Poland once before, in January when the ice was thick, arriving by night train in Kraków for a friend’s wedding. Snow covered the ground. It’d looked magical, but we’d left curious to see the country in the lush contrast of summer.

We had the chance of returning for a summer visit, this time with our ’van. Our friends, Iza and Artur, would show us around their region in the far east of Poland, near the citadel town of Zamosc, then we’d tour the south of the country by ourselves. 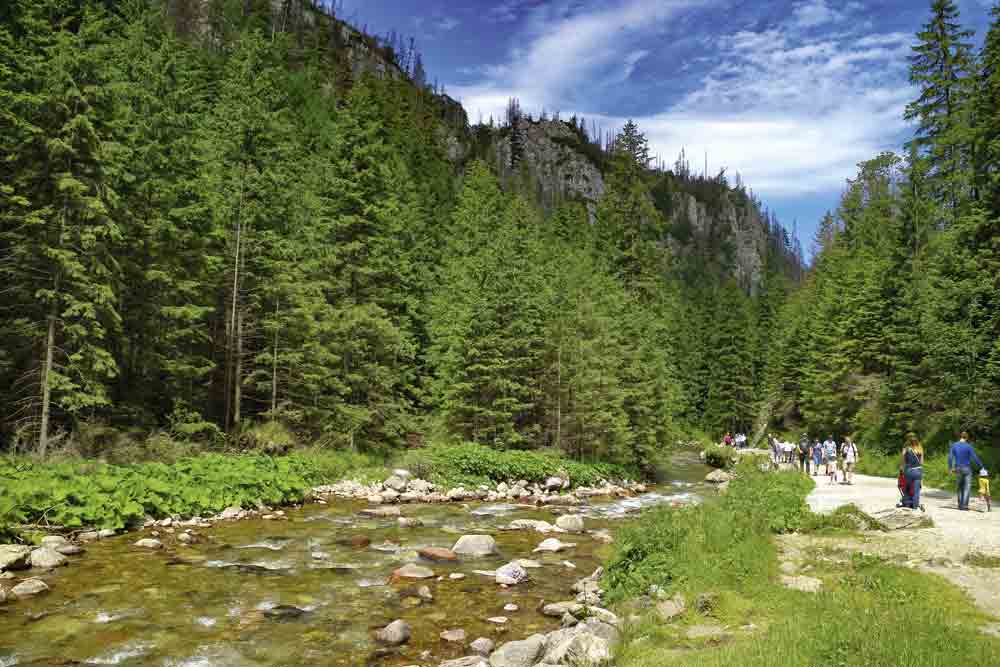 Zamosc lies to the north of the Roztocze National Park, a forest and wetland area with walking and bike trails.

We parked near Susiec to explore the Nad Tanwia, a stream with a series of waterfalls opening out onto meadows conveniently overlooked by the odd café stocked with good ice cream (we soon learnt ice cream is a national favourite!).

Stopping at viewpoints with stone towers to climb, we continued to Zwierzyniec. Here, we picked wild blueberries on our way to see the Konik horses, a hardy local breed which graze in the woods and can often be viewed from a walkway overlooking a lake. This area has some of the tallest fir trees in Poland and is home to deer, boar, beavers and wolves.

I’d noted plenty of campsites in this area and that Zwierzyniec has its own brewery and beer garden, which on some summer nights becomes an outdoor cinema. It’s on our ever-growing list for ‘next time’.

Back at Iza and Artur’s house we ate barszcz (beetroot soup) then, at dusk, strolled round the local fields where maize, wheat and tobacco grew, the margins lined with wildflowers. We discussed our onwards route, inviting as much destination and pronunciation advice as possible. The next day we were on our own.

Our vague familiarity with Kraków made it seem a good place to start.

For over five hundred of Poland’s wealthiest years, Kraków was the capital city, before it changed to Warsaw in 1596. It has plenty of architecture and history and is now the most visited city in the country.

As well as a good bar and restaurant scene, Kraków offers enough tours and trips to suit everyone, ranging from historical bike tours in the centre to taking a minibus to the vast, decoratively carved Wieliczka salt mines.

We tried the Underground Rynek tour under the central square. Archaeological finds, such as medieval jewellery and craft tools, are displayed among mock-ups of workshops and burning buildings, all in the setting of the spectacularly uneven streets they were buried in.

At the end of the thirteenth century Kraków was one of the world’s great trading centres and used its wealth to fill in the flood-prone medieval maze of streets and make the city centre level; the grand square was simply built on top.

Near our base, Camping Smok, stood the Kosciuszko Mound. This is a swirling hill built in the style of nearby prehistoric earthworks to commemorate a popular general, Tadeusz Kosciuszko. We set off up a tree-lined avenue towards its impressively steep and winding stone path.

It was a good excuse for a stroll through a quieter leafy neighbourhood and to learn about a particular era in Polish history. Kosciuszko rose to national hero status in the 1790s, when Poland was being split between its three powerful neighbours.

Despite inevitable ultimate defeat, he led an inspiring battle against numerically superior forces at Racławice, near Kraków.

Less inspiring were our fitness levels after lots of sitting in the ’van, but we reached the top and identified Kraków’s main square and castle beneath us. 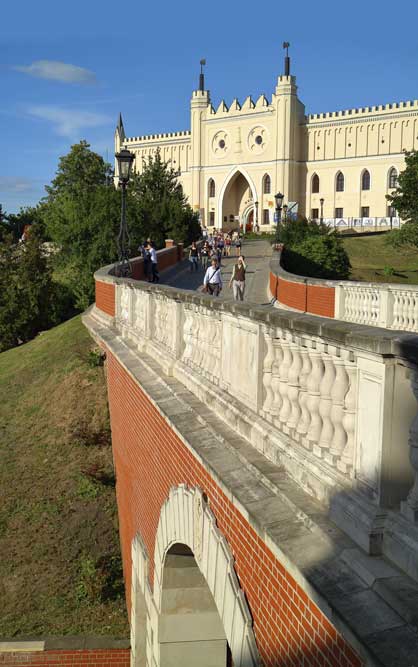 Beyond were the dark Tatra Mountains – where we were headed next.

The Tatras are the highest mountains in Poland and easily reached from the town of Zakopane. A popular year-round holiday destination, it has something of a fairground feel, with plenty of restaurants and bars.

Zakopane made a great base as it offers many ways to escape from it into the high jagged skyline of the mountains to the south of town. Perhaps the most dramatic option is the cable car up to Kasprowy Wierch at 1,987m (6,519ft), but we were content with the chairlift at Harenda ski centre just behind our campsite.

There were families with small children, couples going to the top for a drink with a view and groups of friends on for the ride. Then the steep-roofed town in its wide valley opened out before us, ringed by the mountains.

We found ourselves significantly higher on a ridge, where hens pecked in the long grass beside wooden houses and brown cows lay with a green chasm as their backdrop. We followed a quiet lane heading for Gubałówka Park.

A sort of hilltop extension of the town centre, there was a fast toboggan slide and small ponies giving rides to children between ice cream stalls. We enjoyed the view directly onto the mountains, where snow glowed against the bare rocky shadows of the peaks.

Although there was a path – and another chairlift – the easy way back down was by funicular, a very steep one that first ran in the 1930s.

Being high up, the weather was changeable, but restaurants in town served pierogi (hot, cheese-stuffed dumplings with sweet salad) and grzaniec (warm spiced beer), which kept our spirits up as we waited for the heavy skies to move along. When they did, we took one of the many minibuses leaving the bus station to Koscieliska Valley.

An easy-going track followed a rocky stream through high and craggy rock formations and meadows led towards distant blue peaks. We continued to a mountainside where we picked wild blueberries to eat by a stream.

Plenty more well-marked paths pointed temptingly upwards; however, these would have to wait for another time. We walked down. To make up for moving on, we decided to include the lesser-known Karkonosze Mountains, nearer the western border, later in the route – but we had a couple of stops to make on the way.

The old town of Oswiecim will be known forever as the site of the Second World War extermination camp, Auschwitz. After Auschwitz was liberated in 1945 the site was quickly established as a state memorial, having been left as found out of respect and as proof of what had happened there. It now receives over one million visitors a year, paying respects and wishing to learn.

There, displays with personal stories and diary quotes had made it particularly sombre and poignant. I was pleased to go with company, which, along with welcome sunshine, kept us from too long in our own thoughts.
We visited Auschwitz-Birkenau, an expanse of chimney stacks, barracks, barbed wire and watchtowers, clearly displaying the shocking extent of planning and lack of humanity involved.

Earlier in our trip, Artur had shown us the Majdanek memorial site near Lublin, the camp where his grandmother had been imprisoned as a little girl after her village had been taken over by troops.

We felt the camps were very much worth seeing, giving us a greater understanding of Polish and European history – an important reminder not to dismiss what had happened as long ago – and a great appreciation for our own freedom.

From Oswiecim it was a direct motorway drive to the city of Wrocław. Decorative buildings from the turn of the nineteenth century centred around a main square and impressive town hall, while severe red brick churches stood tall beside the river. 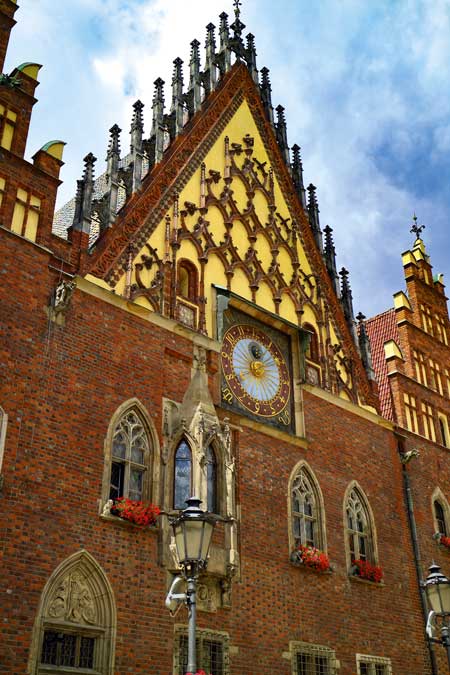 Wrocław had once been German Breslau; this gave us an entire new angle on the country and it was all very well demonstrated by the prevalence of beer halls. We liked Targowa, which sold local beer in a cellar and the Złoty Pies on the central square with brewing vessels and copper tanks behind the tables, though there were many more.
By now right over in the west of Poland, we headed to Karpacz, by the Karkonosze mountains. A farm not far away – Agroturystyka Jaskółka – offered outdoor activities, including horse riding.

As it was our final stop, we decided on the spur of the moment to give horse riding a try. We met Ania, who gamely agreed to teach us the basics – getting on and staying on a horse! We were watched by noisy llamas in the neighbouring pens before setting off for a short trek in woods.

As we only had to follow, our main focus was on avoiding low branches and trying, unsuccessfully, to stop our horses eating oats that grew along the route.

The views over the verdant valley and of the wildflowers filling the fields were simply wonderful from so high up.

Before leaving for home, we chose to ignore our sore legs and fitted in one last mountain walk. A wooden church at the edge of the forest above Karpacz was our starting point. The bus gained most of the height for us before we followed a wide track through pines. Suddenly the mist surrounding us lifted, revealing a vast rugged valley of rock and deep green trees.

At its far end a mountain shelter served drinks and meals overlooking a lake. This made a perfect finale to our trip through Poland, a country full of history, outdoor activities and glorious scenery.

This feature originally appeared in the November 2018 edition of MMM - get a digital back issue here.