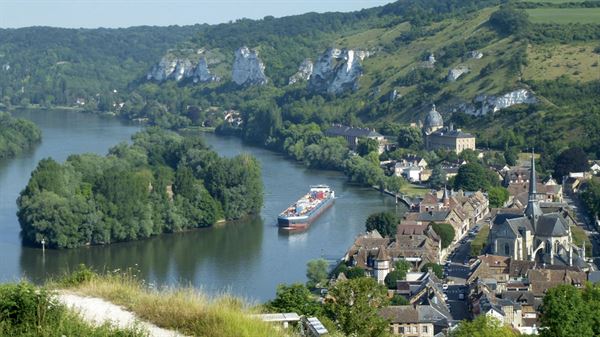 France’s great rivers offer the traveller a rich variety of beautiful, interesting and sometimes moving experiences. Come the evening, there’s nothing better than sitting by the water watching the river take its course.

My explorations began just an hour or so south of Calais. West of the A16 motorway lie the now quiet rural lands of Picardie’s lower Somme Valley. We’ve all been moved by the events along its banks a century ago and by the powerful memorials created as a result. Most of those Great War sites are east of the A16 but are easily reached from where I stayed at Saint-Quentin-en-Tourmont.

From Camping le Champ Neuf, I also visited the nearby bird reserve, Parc du Marquenterre. It borders the Baie de Somme and the path around lagoons and wetlands ends at an enormous natural theatre with a backdrop of pine trees climbing the cliffside. The hundreds of white shapes in these trees are storks, egrets, spoonbills and herons in their nests. There is constant movement and noise on this crowded stage, with much squabbling and clacking and greeting of returning partners with food for the young. Drama indeed!

Just outside the site’s gate is another sight that tells you this can only be France – a house/shop that is home to an escargotier, a breeder and seller of snails.

Just a few miles east are UNESCO World Heritage Sites, Abbeville and Amiens; the latter with its cathedral and fascinating hortillonages – allotment gardens accessible only by punt or rowing boat.

The cycle ride I took along quiet country roads to the old fishing village of Le Crotoy was delightful. Little remains now of the fishing industry, but there is a memorial to those from the town who lost their lives at sea, including the 1867 tragedy when two ships sank with the loss of 16 men.

Le Crotoy is a very pleasant holiday place with harbour, cafés and restaurants looking out on the Baie de Somme. A heritage steam railway runs around the bay carrying families to the attractive town of St-Valery-sur-Somme. A century ago it carried munitions and troops to the front.

Leaving the Somme and crossing the Seine at Rouen brought me to the middle Loire. I came to the small town of Montsoreau by way of a slightly tricky and very narrow old girder bridge (max 3.5 tonnes and pull in the wing mirrors!) to reach Camping L’Isle Verte. This site, squeezed between the Loire and the cliff, is popular with British motorhomers.

Right outside the gate is a small charcuterie selling home-made pâtés, sausages and other meats; it’s all very good. Dug into the soft, cream-coloured ‘tufa’ rock of the cliff face behind it are troglodyte dwellings. To find out more we visited the excellent tourist office in Montsoreau, which has a good explanatory display.

Some of these troglodyte homes have been renovated and enjoy superb views over the river. Next door to the troglodyte dwellings is a maison du vin making and selling wine from the vineyards on the hills behind. Locally sourced produce; no food miles here!

Montsoreau was all I’d hoped for. Narrow old streets with geranium-filled window boxes, a patisserie, another charcuterie, bar-tabac, church and a couple of restaurants.

This stretch of the Loire is famous for the châteaux strung out like a necklace of pearls along its banks. Like pearls, too, these châteaux seem to glow in the light reflected from the river. 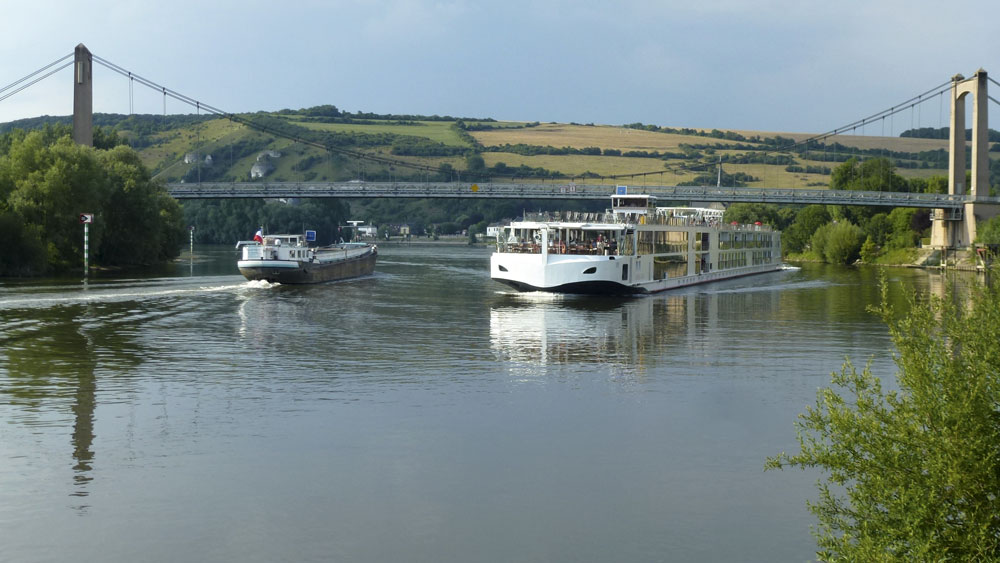 Montsoreau has its château, too, looking rather sternly out over the Loire but with an elaborate entrance on the landward side. With its off-white turrets and spires, it’s smaller and more modest than the great Loire châteaux a few kilometres away. Behind it are more of the troglodyte homes built in the cliffs.

A gentle cycle of three miles inland along very quiet lanes brought me to the abbey at Fontevraud, built from the same creamy local stone as the château. As an important abbey in the Middle Ages it would have been the hub of the great Plantagenet empire.

In the nave are the tombs of not only the most powerful woman of her time – Eleanor of Aquitaine – but also her son, Richard the Lionheart. Eleanor lies in a beautifully simple coloured tomb next to her husband, Henry II, at the heart of the white, unadorned and undecorated abbey. Its simplicity is very moving and rather dramatic.

I found the rest of the abbey and its grounds worth exploring. The refectory is huge, yet unsupported by pillars, a true feat of medieval civil engineering. The cloisters, with sun streaming through their arches, are a twenty-first century light show. The abbey kitchens are extraordinary.

Candes-St-Martin is a Plus Beaux Villages (one of France’s most attractive). Set at the confluence of the Vienne and Loire rivers, it is much like Montsoreau.

The large, cool and elegantly simple church is accessed through a most unusual porch supported by a single slender column. In the village centre is a hall where boule de fort is played. This game seems rather like bowls but is played indoors on a long, concave, wooden surface. It is said that this is so because sailors used to play it in the hulls of their ships.

Down by the water’s edge I wandered along the old wharves where all the river freight traffic once moored, though flat-bottomed boats and punts still use them. Perhaps symbolising how times change, just a few kilometres upstream is a nuclear power station. Irrespective of this, Candes is very attractive.

I found more delightful villages like these all along this stretch of the Loire. They’re not only very easy to explore by bike, but pedalling along beside the Loire on mainly separated cycle paths is also a pleasure.

Just south of the Loire is the seemingly unremarkable town of Doué-la-Fontaine. Doué may look dull and it certainly won’t win any Plus Beaux Villages accolades; however, it does have remarkable sights around its outskirts mainly linked to stone – and roses. In fact, this small area produces almost half of France’s roses.

I stayed at the excellent Camping La Vallée des Vignes in neighbouring Concourson-sur-Layon and pedalled the three miles to Doué-la-Fontaine. The ride took me past quiet vineyards and along lanes through woodlands, spotting a hen harrier, turtle doves and a golden oriole along the way.

The first stone sight I encountered was tucked away below the roadside. Whereas at Montsoreau the troglodytes dug sideways into the vertical cliffs, here the houses were dug below ground, in and around pits. Most of them now appear to be used for storage.

In what were the grounds of a long-gone château in Doué is a most charming English-style rose garden (this was a free-to-enter municipal garden and not Les Chemins de la Rose gardens, also in Doué). Unfortunately, I was visiting about three weeks too late for the best show. If you like roses, Doué-la-Fontaine is the place to be!

While wandering around the gardens I kept hearing an almost unearthly and deep booming noise, which I couldn’t identify. But more about that in a moment …

Interestingly, the stone of Doué-la-Fontaine was quarried for sarcophagi. Between the sixth and ninth centuries, thousands of stone coffins were cut and shaped from the underlying rock as it was thought that it would preserve the bodies for longer. Clearly it was a thriving business.

A zoo (the Bioparc) has been created within the canyons and quarries carved out of the bedrock. Irrespective of one’s views about zoos, this is a remarkable place in which to see, appreciate and admire creatures otherwise usually only seen in TV documentaries. The canyons in which giraffe, rhino and antelope roam are striking, as are the amphitheatres for vultures and snow leopards. It felt a bit like being in Jurassic Park.

As I cycled back to Concourson late that afternoon, passing more troglodyte houses, I kept hearing that loud, strange, echoing call that I’d heard when in the rose garden. I now knew them for what they were: the calls of the apes and gibbons from the zoo. As I rode across the vineyards, the animal noises really made it feel quite eerie.

I headed northeast to the banks of what is probably France’s most well-known river, the Seine. Camping L’Île des Trois Rois is right on the river and, behind it, is the ruined Château Gaillard high above the chalk cliff on its lofty perch. 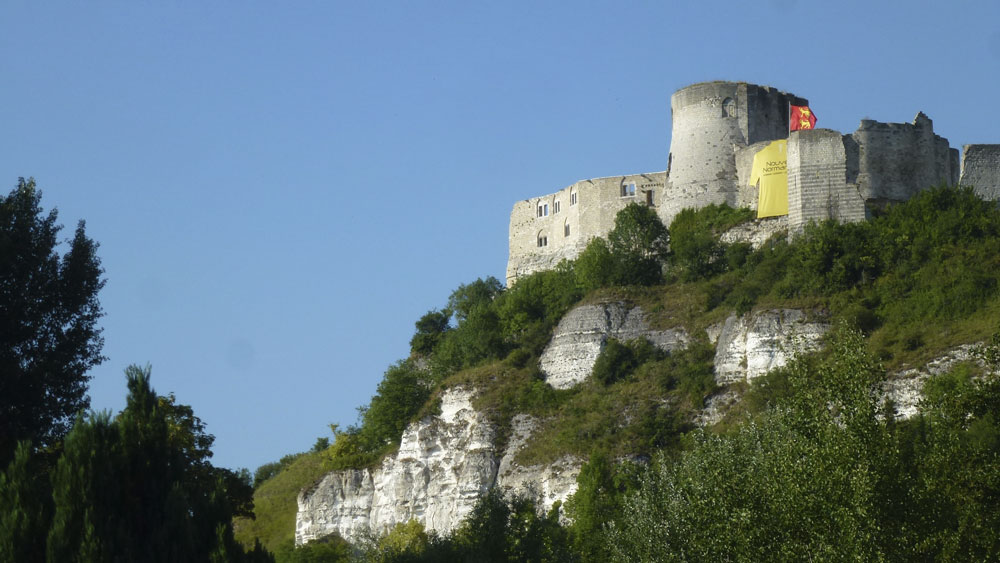 These chalk cliffs provide a dramatic backdrop to the attractive town of Les Andelys. Le Petit Andely is a five-minute walk along the riverbank from the campsite.

Les Andelys has attractive medieval houses and its ancient wharves are now used by the enormous river cruisers. A little further along the Seine are some glorious mock-Tudor villas. Some are slightly set back, whilst others are thatched. It could almost be Henley-on-Thames.

I learnt that Château Gaillard was built to guard the Rouen/Paris route by Richard the Lionheart whom I’d come across earlier in the trip at Fontevraud. Legends about the Château Gaillard tell of unfaithful duchesses being murdered and now returning to haunt the battlements.

TE Lawrence (Lawrence of Arabia) apparently visited here while a student to research medieval castle architecture for his degree. I am sure that he, too, enjoyed the views of the Seine’s meandering course laid out below the castle.

I followed a pleasant route along the Seine and up into the hills behind Camping la Vallée des Vignes with the aid of a walking route from the tourist information office in Les Andelys. The route took me past an old laverie deep in the woods where clothes were washed and to a couple of mares high in the hills. These mares were ponds dug out of the rock into which water naturally flowed and were created around 600 years ago as water reserves for cattle to use during times of drought. Now they are havens for dragonflies, newts and frogs.

Perhaps the still waters of those mares that I came across, almost by chance and right at the end of my trip, sum up the theme of my journey – that of water and stone working in harmony.

Read more travel features each and every month in MMM magazine - click here to browse and buy digital issues. 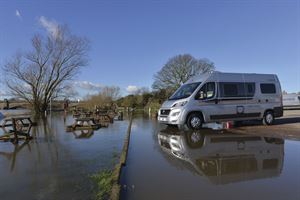 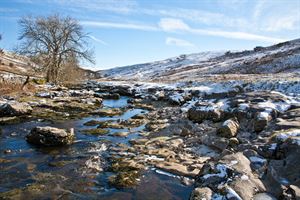 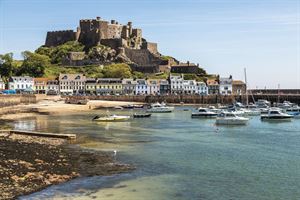 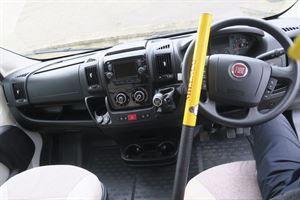 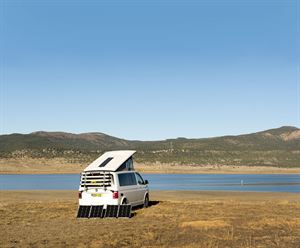 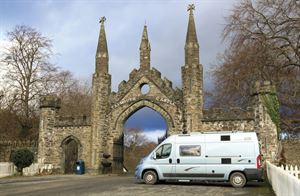 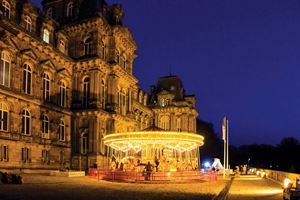