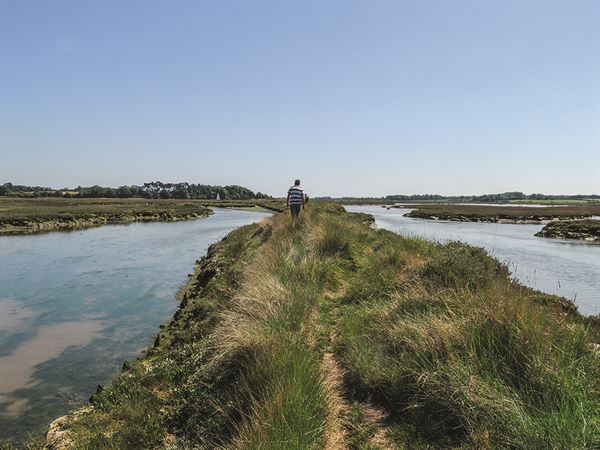 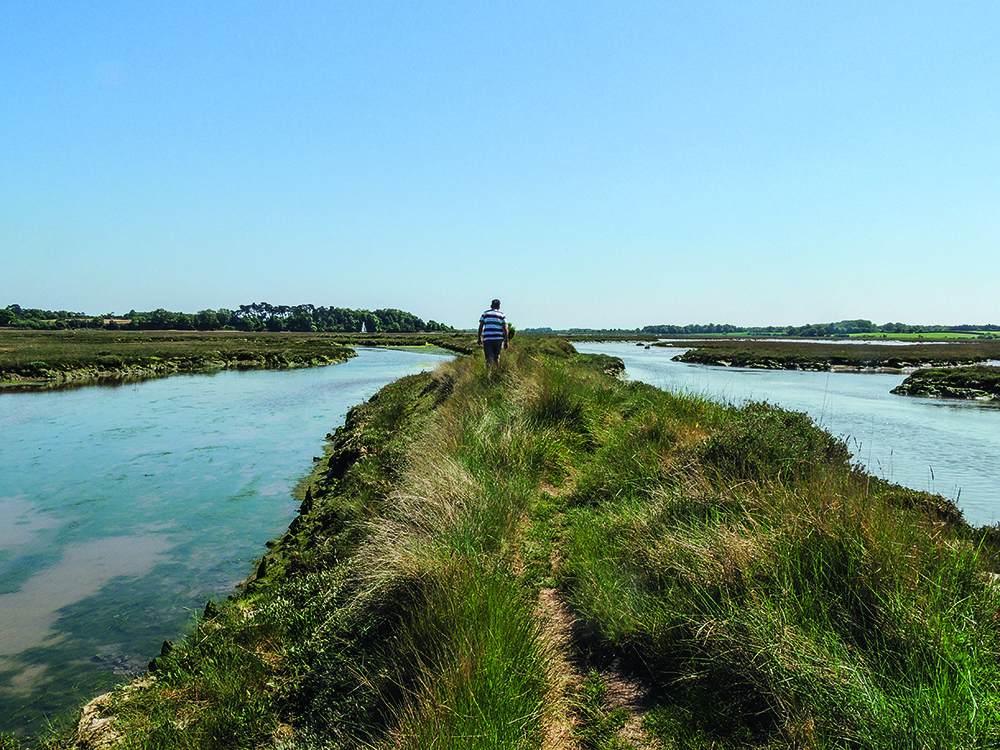 Young and dynamic, Orford Ness – or ‘Nessie’ as we named it – is cloaked in dark intrigue and defines the vulnerability of Suffolk’s coast. Hooking its tail onto the seaside town of Aldeburgh, Nessie – Europe’s largest and a globally rare vegetated shingle spit – slithers beside the Alde-Ore estuary for the last 10 miles of its journey to the North Sea.

As the estuary opens its mouth wide, Nessie’s sinuous body lunges forward and swallows another chunk of the mainland. Indented with five broad estuaries, the Suffolk shoreline faces a never-ending battle with the erosive forces of wind and water. The sea advances and the land, unable to hold its ground, surrenders. Dunwich, once a medieval city and significant port rivalling London, was one such lost battle. All that remains of it now is a hamlet with a fascinating museum.

Compared to most of southern England, Suffolk’s coastline, including the estuaries, is a largely undeveloped and protected landscape that supports a wildlife-rich mosaic of wetland habitats. Beyond the wet stuff, the low-lying topography is characterised by quaint villages, historic towns and parcels of the Sandlings’ ancient heaths. It’s a watery world of marshes, reedbeds and vast skies, sometimes remote and moody, with an incongruous sprinkling of prominent man-made landmarks. Fortified by Aldeburgh’s renowned fish and chip shop, we admired the commanding Martello Tower, built at the foot of the Orford Ness peninsula to resist a potential invasion by Napoleon.

We would return to Nessie but, for now, we chose to amble along Aldeburgh’s dignified seafront where pastel-shaded villas, fish shacks and a shingle beach scattered with brightly coloured boats lined along the promenade. Most of old Aldeburgh has been erased by the sea, so its timber-framed Tudor Moot Hall – once the market cross at the heart of the settlement and which now rests close to the beach – has a strong sense of place for the locals. 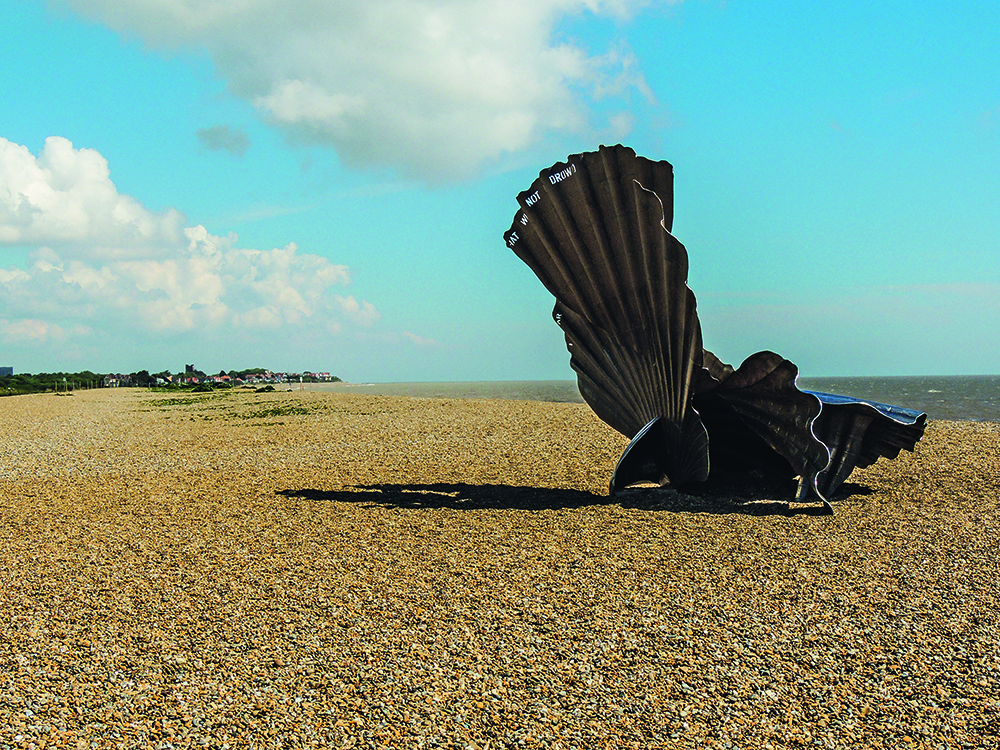 Conversely, Maggi Hambling’s iconic sculpture of a scallop – dedicated to composer, Benjamin Britten – leaves many ‘shell-shocked’. At the northern end of the beach, it’s a pebble’s throw from our base at Church Farm Holiday Park. Crunching through the shingle towards the scallop sparkling in the sun, it’s difficult to say if Maggi’s freewheeling imagination is in tune with the sea music that inspired Britten, the town’s most famous son. Harmless fun, maybe, especially with the golf ball dome of Sizewell nuclear power station looming ahead.

Edging closer to Sizewell, things get even more surreal. In the early twentieth century, Glencairn Stuart Ogilvie purchased the Sizewell estate and dreamt up a Disneyesque fantasy village at Thorpeness – Britain’s first purpose-built holiday park. Targeting the discerning traveller, Ogilvie shunned the ‘vulgar’ trappings of the traditional seaside resort and designed a genteel family holiday package offering a range of wholesome activities. The centrepiece of this state-of-the-art social hub was a shallow boating pond with several small islands furnished with whimsical characters from children’s books. JM Barrie, the creator of the mischievous Peter Pan, was a friend of Ogilvie and Peter Pan’s adventures were the star attraction.

At the head of the Alde-Ore estuary, a significant barley malting operation developed. When it ceased trading in 1965, Benjamin Britten converted one of its buildings into a world-famous concert hall and venue for his Aldeburgh Festival. With a wave of regeneration’s magic wand, the entire site has been transformed into an art and retail complex – Snape Maltings. Here, Britten’s classical music sits pitch-perfect alongside contemporary works by the likes of Barbara Hepworth and her bronze sculpture, The Family of Man. 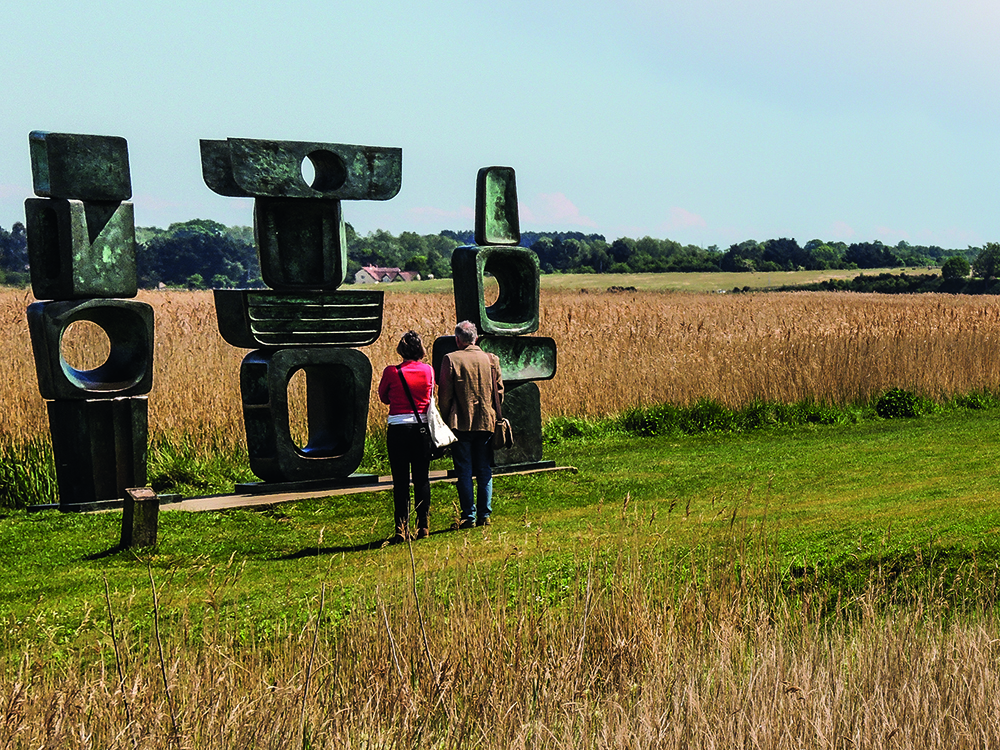 Standing on the ramparts of Orford Castle, it was hard to comprehend that, when the rock-solid walls of the Norman keep were built, its defenders probably looked directly out to sea and the mouth of the Alde estuary was at Aldeburgh. These days, Orford sits midway along the seaward-facing section of the estuary created by the growth of Orford Ness, which, during the twentieth century, found itself on the front-line of top-secret military strategy. From the castle, we’d spied some strange-looking ‘pagodas’ on Orford Ness.

Later, whilst walking closer to the spit along the bank of the Alde-Ore from Orford Quay, a mist-shrouded passenger ferry slowly floated behind the pagodas. Eerie enough, but when the Cold War began to bite these exotically named pagodas shielded a ‘Chinese wall’ for the testing of atomic weapons. Orford Ness also provided camouflage during this tense ideological power struggle for Cobra Mist’s radar to stealthily raise its head and covertly gather intelligence over the horizon.

To the north of the Alde-Ore is the Blyth estuary where a fashionable Victorian seaside resort sprang up on what is virtually an island – bounded by the sea, estuary and Buss Creek – with only one road in and out. Just as with Aldeburgh, we didn’t find Southwold a brash resort. Its award-winning pier – built as a landing stage for the daily Belle steamships arriving from London – a line-up of colourful, amusingly named beach huts, an active lighthouse plonked in the middle of the town and its green greens made for a pleasant wander along the front. In particular, the clifftop vantage point at Gun Hill, where six large cannons point out to sea, is not to be missed.

The town of Woodbridge once owed its prosperity to shipbuilding. It has a bustling waterfront crowned by the white weather-boarded façade of its Tide Mill. Although the present mill dates to 1793, Woodbridge was home over 800 years ago to one of the country’s first tidal mills and was the last such mill to end its commercial life in 1957. Restored to working order, you can still watch the wheel turn to grind the grain when the tide permits. Moving downstream, we dined well at the riverside Maybush Inn at Waldringfield with views of the nautical comings and goings.

Following the bank of the estuary, the crowd quickly dispersed and we found ourselves amid an amazingly atmospheric salt marsh. It was a heavenly experience until, suddenly, the clear path ended and we crashed back down to earth; very boggy earth! From the hamlet of Felixstowe Ferry, with a pub and café also unimaginatively named after the mode of transport across the Channel, we contented ourselves with the view over to Bawdsey Manor. 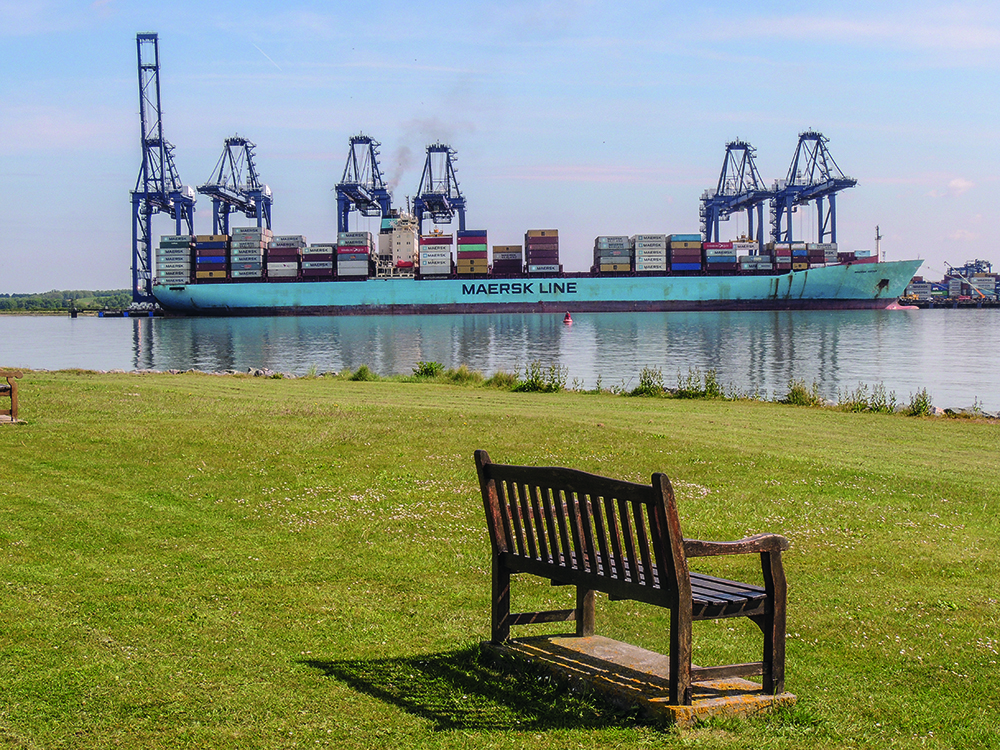 Prior to World War II, groundbreaking experiments to develop radar technology were being conducted on Orford Ness. The government purchased Bawdsey Manor to further this work and erect Britain’s first radar station. This was then quickly linked into a chain of radars that proved invaluable to the war effort, especially during the Battle of Britain. The Shotley Peninsula separates the Orwell and Stour estuaries as they converge into the North Sea. As we stood on the tip of this peninsula, to our right on the far bank of the Stour was Harwich and, on our left across the Orwell, the UK’s largest container port, Felixstowe.

A sign at the entrance to Shotley Marina claimed it was the East Coast’s premier marina. Feeling rather sceptical about this claim, we strolled around the promontory and, within seconds, our doubts melted away; this marina could have been towed in from the Mediterranean. Leaving the port behind, this lonely peninsula may be separated from intense human activity but it teems with wildlife.

Beyond the Stour estuary we headed upstream to the heart of ‘Constable Country’ – Dedham Vale – immortalised by the landscape artist, John Constable. Within a few intimate square miles of where Constable spent his childhood he captured the essence of rural England on canvas. Taking in the classic circular route from Constable’s birthplace at East Bergholt, we tracked his footsteps to school in Dedham and along the meandering Stour, dotted with hired rowing boats, to the mill once owned by his father at Flatford.

Dedham Vale straddles the Suffolk/Essex border several miles from the first capital of Roman Britain – Camulodunum – and Britain’s oldest recorded town. About to enter Colchester’s Castle Park, we stopped to admire a war memorial topped by a statue of the Greek goddess of victory. It’s a fitting entrance to a wonderful park where the town’s castle perches high above the River Colne. The castle was built on the foundations of the Roman Temple of Claudius that was razed to the ground during Queen Boadicea’s (aka Boudicca) uprising. It has the largest surviving Norman keep in Europe and provided a blueprint for the Tower of London.

After exploring the castle, we sat under a tree-shaded balcony – a restful spot to admire the sweeping vista across the lower park’s pretty ornamental gardens, bandstand and remains of the Roman wall. On Constable’s beat in Dedham Vale we’d visualised the scenes that had inspired his masterpiece brushstrokes. At Aldeburgh, we’d listened to the acoustics on the beach which captivated Britten. Yet we were in awe of the creative power of the sea to constantly rework its canvas.

This feature was originally published in the February 2018 issue of MMM magazine. Subscribe to MMM magazine today for your monthly dose of motorhome travel inspiration.