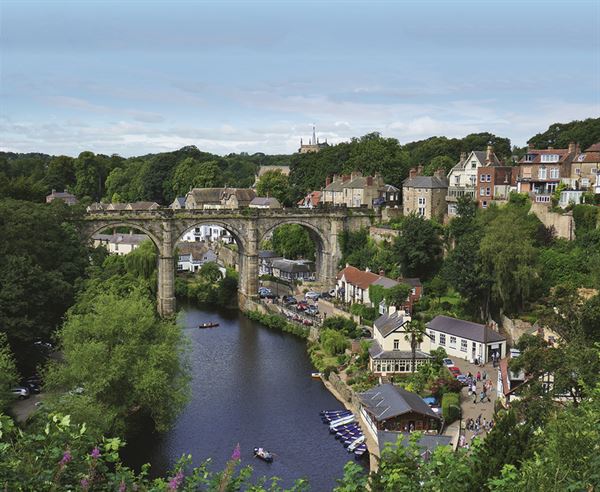 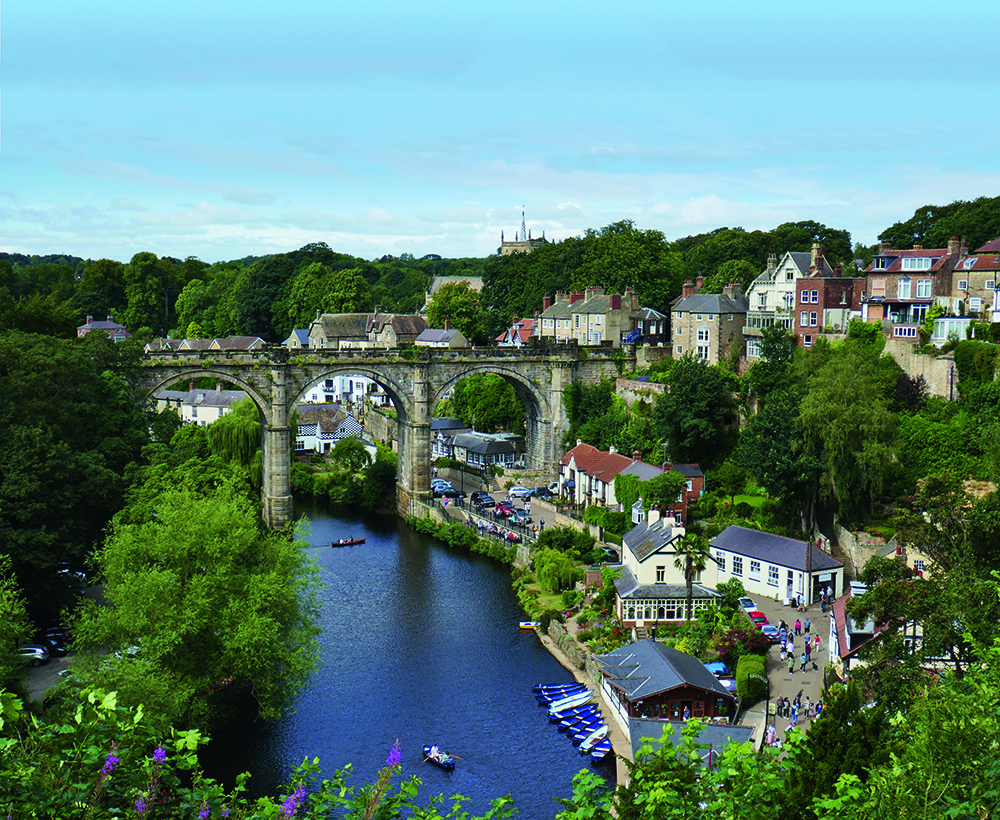 I had been inspired to visit the Yorkshire town of Knaresborough and the Nidd valley after reading about the Forest of Knaresborough; not woodland, but a massive tract of moorland and exclusive royal hunting ground between the rivers Nidd and Wharfe. Established around the twelfth century, it wasn’t until 1767 that 49 round-topped stone markers were placed around the boundary to formally mark it; 30 of these stones survive today.

Pateley Bridge lies just outside the forest boundary and is a picturesque town on the River Nidd, northwest of Knaresborough. As we walked up the steep and narrow main shopping street, I admired the attractive stone buildings. Popping into the small cave-like shop that claims to be the oldest sweet shop in England, I was engulfed in the saccharine smell that has permeated the floorboards. After drooling over the jars of sweets that line the walls, many of which I hadn’t seen since childhood, we left with a nostalgic bag of chocolate mice.

The Nidderdale Museum is in the old workhouse and resembles a neatly arranged flea market, with an abundance of objects that tell the story of the working people in the dale. You would have to spend days here to see everything, so we split up and picked out individual favourites. Anthony was interested in the old photographs of the nearby valleys and the workers who created the reservoirs there in the nineteenth century, while I went further back to the Celts. These stone heads are not uncommon in Yorkshire and, although few facts are known about the Celtic period, some historians think that the Celts valued the head as the location of the soul. Whatever your interest you will find something here: a recreated Victorian living room, a 1950s hairdressers and a chock-full cupboard of old toys are among the exhibits. 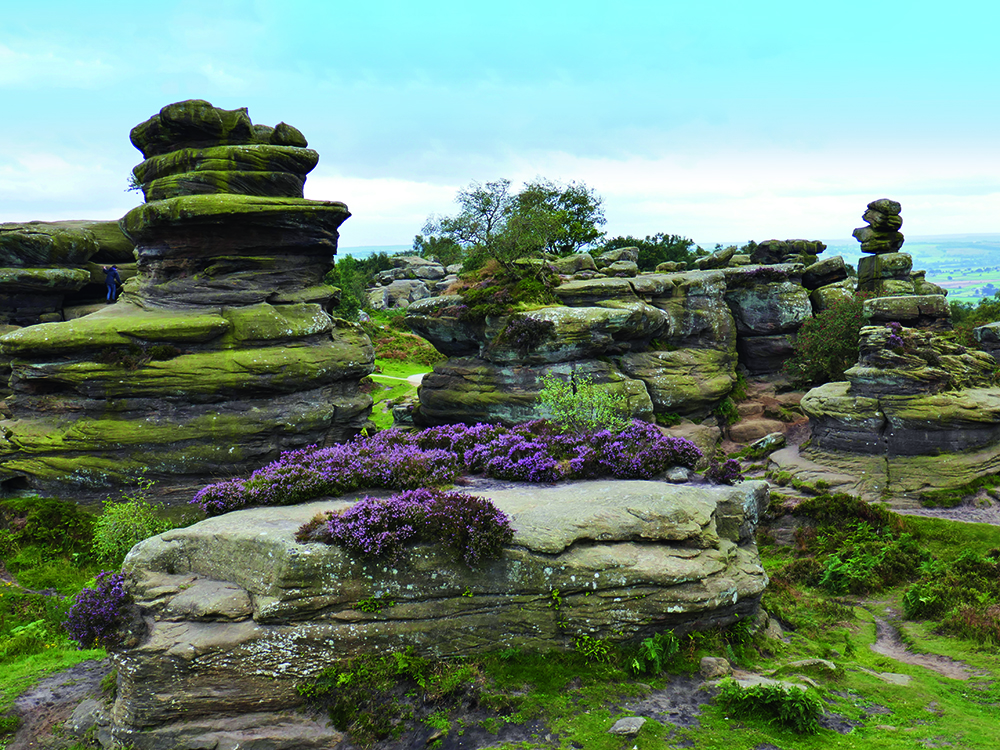 Following the Nidd towards Knaresborough, we stopped at the dramatic landscape of Brimham Rocks. This natural playground is delightful to explore, particularly in late summer when the brilliant purple heather is flowering. The maze of naturally sculpted and strangely shaped rough gritstone rocks means visitors can find ledges to scramble up, a sheltered corner or an extensive view. We followed the grassy paths to the outcrops on the edge, picking bilberries as we walked and found a crag with views across the Nidd to the white golf balls of RAF Menwith Hill listening station.

Picturesque Ripley was built as a model village in the nineteenth century by the Ingilby family of Ripley Castle, after the previous village was demolished. Today, it has a cobbled square overlooked by a pub, rows of flower-decked stone houses and a church, parts of which are older than the nineteenth century improvements. Ripley Castle welcomes visitors to the grounds for free during the week. This left sufficient pocket money for delicious ice creams from the World Famous Ripley Ice Cream shop. The castle is a stone castellated building, which has been in the same family for over 700 years. We went onto the terrace for the lovely views over the lake and parkland before setting off for a walk.

The next morning we walked from our campsite in Killinghall above the River Nidd, following footpaths through the fields to the picturesque packhorse bridge at Knox. We continued to the wooded Nidd Gorge, the riverside path inviting in the dappled sunlight. The Nidd is a lovely and lively river, draped on each side by drooping trees which provide plenty of resting spots for the kingfisher that followed us, flying low along the river in a flash of blue-green.

After our peaceful walk, we arrived in Knaresborough to find the town buzzing – thanks to the annual festival. In the attractive market square, circled by charming old brick buildings, a small crowd was listening to music by the market cross. A celebrated Knaresborough resident is remembered in this square. Jack Metcalf, known locally as Blind Jack, has a lovely atmospheric pub to his name, as well as a statue and a window mural.

Born in 1717, Jack was a remarkable man. He lost his sight at six years old after smallpox, but was an accomplished fiddler and worked in the army and as a coach driver before becoming England’s first professional road builder. He constructed around 180 miles of turnpike road in the north of England, specialising in using rafts to construct roads across boggy ground. 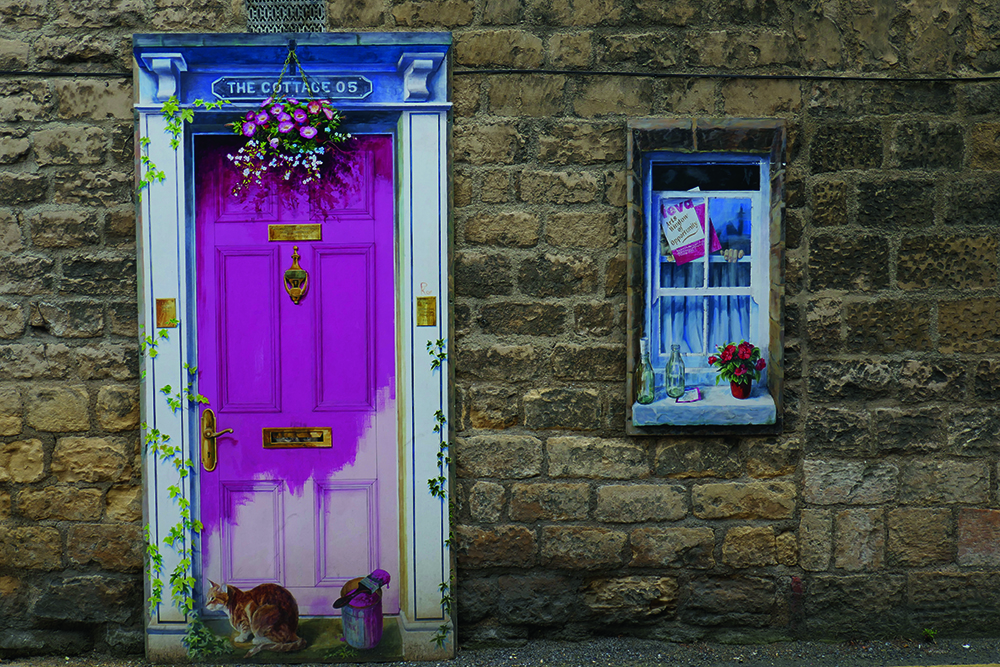 We explored the streets of Knaresborough, searching out the colourful murals painted in bricked-up windows and on walls. These vibrant paintings use a trompe-l’œil technique to fool the eye into seeing something real. As well as Blind Jack playing his fiddle, the paintings remember other local characters. I spotted Beryl Burton, a champion cyclist, leaning out of a window. On a stone wall in a courtyard I found a painted cottage door; on the doorstep was a cat so real that I wanted to stretch out and stroke it!

Knaresborough was always outside the forest that bore its name and has a long history. It’s mentioned in the Domesday Book and, from the sixteenth century, was popular among visitors when its now larger neighbour, Harrogate, was just a village. The town is situated around a deep and spectacular sandstone gorge, at the bottom of which is the River Nidd. The ruined castle, originating from Norman times and rebuilt in the fourteenth century, overlooks the river and was destroyed by the Parliamentarians in the Civil War. We bought ice creams and walked to the castle where the crowds were enjoying a medieval fair among the stone ruins. I sat on the castle ramparts enjoying the picturesque view into the gorge, crossed by the high and spectacular railway viaduct and the river busy with rowing boats.

Taking the steps through Bebra Gardens to the gorge, we were out of the summer breeze and the air was hot. At the Chapel of Our Lady of the Crag a mass was finishing. A crowd had been attracted by the chance to worship in the sunshine and the congregation was now strung out down the steps that zigzag through the gardens to the chapel. This roadside chapel, cut into the crag, was the work of the castle’s master stonemason in 1408, continuing a Christian tradition of using caves for worship. The charming shrine has a small window, a cross above the door and a carving of a life-size knight guards the entrance. Having waited for the crowds to disperse, I visited the dim chapel. The candles were still lit and the scent of incense hung in the warm air. 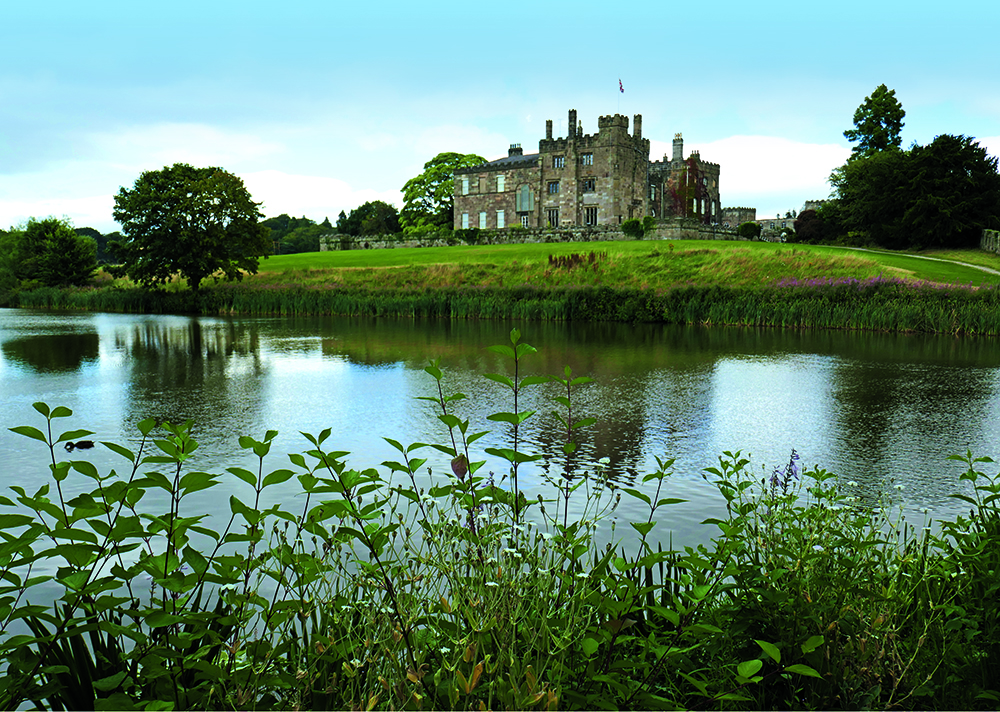 It was fitting to finish our trip to Knaresborough with Mother Shipton’s Cave, an attraction where objects are turned to stone. I wasn’t sure what to expect here but, once we had negotiated the gift shop and wandered along the woodland paths, the cave turned out to be fascinating. Although more an overhang of rock than a cave, a curtain of mineral-rich water constantly drips down to a pool, creating natural stalactites and also getting caught up in the tiny teddy bears, hats, a teapot and other items that are hung from the rock to become petrified. Apparently, it takes three months of drenching by the minerals to convert a furry teddy into a fossilised bear.

There is commentary, which explains the process and tells the sad story of Ursula Sontheil (aka Mother Shipton). Born in 1488, Ursula was bullied for her looks as a child and, although offered a home, chose to live in solitude in the riverside cave she was born in, near to the petrifying well, which local people feared was magic. Here she made a living from herbal remedies and from telling prophecies.

The following day we took the ’van to Plumpton Rocks, another gritstone outcrop just south of Knaresborough. These crags are privately owned and the natural garden has recently been renovated and an entrance fee is charged. The garden was created in the eighteenth century with an artificial lake under the crags. This lake is covered in a profusion of water lilies and we watched mallards with late broods of ducklings and coots scampering across the lily pads. Among the rocks, we followed meandering paths between the boulders and rhododendrons, sometimes through narrow chasms in the rocks and, at other times, on the open crags with views across the lake.

On Askwith Moor, to the west of Knaresborough, you can follow the paths over the moors to find some of the remaining boundary stones for the Forest of Knaresborough. Instead, on a quest, we walked above the Fewston and Swinsty reservoirs, passing the remains of Dob Park Lodge, an old hunting lodge within the royal forest, to find a Bronze Age decorated stone. This is called the Tree of Life on Snowden Crags. This flat boulder has around 18 indentations, called cup marks, carved in the rock, linked by grooves so it appears to resemble a tree. The rock is on open-access moorland but, even with GPS, the grid reference and instructions, it took time to locate and involved negotiating deep heather, the pollen rising from the flowers as we crossed the pathless moorland.

This feature was originally published in the March 2018 issue of MMM magazine. Want to read more like it? Subscribe to MMM magazine today for your monthly dose of motorhome travel inspiration.