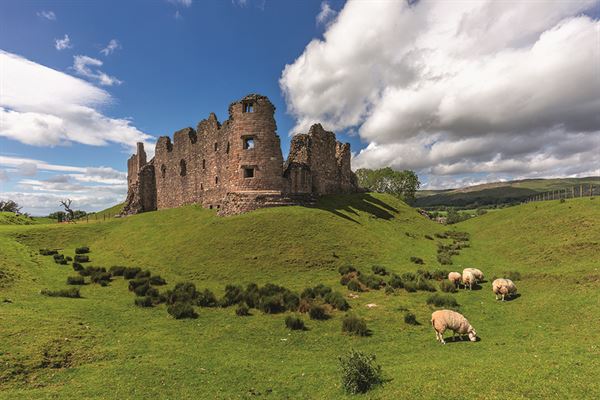 I had long wanted to visit some nature reserves near Kirkby Stephen to see orchids – and it was exactly the right time of year for doing so. As we crossed the border from Yorkshire, where we’d spent a week in the Dales, you could be forgiven for thinking that our trip had been planned around the flowering of orchids (but I don’t want my wife, Sarah, to get that idea!).

Smardale Gill (Cumbria Wildlife Trust) is a varied reserve easily walked from either end along a disused railway line leading from Smardale Hall at the north to Newbiggin-on-Lune in the southwest. This track passes under the famous Settle-Carlisle railway at Smardale Viaduct and passes over its own, rather dramatic, Smardale Gill Viaduct with lovely views up and down the valley of Scandal Beck.

Starting from Smardale Hall, the first section of the railway passes through woodland. Venturing off the line onto a small path, we found greater butterfly orchids and – eventually – a few herb paris flowers.

Nearby bloody cranesbill and common rockroses made a pretty colour combination on the verges. At the old limestone quarry we found fragrant orchids and, along the way, saw common spotted orchids and wood cranesbill. Over the valley, a roe deer buck wandered the slopes, oblivious to us. Birds in evidence included raven, redstart, green and great spotted woodpeckers, garden warbler and willow warbler.

This reserve is renowned for butterflies, with both northern brown argus and Scotch argus seen here in late summer. I didn’t have high expectations of Waitby Greenriggs Wildlife Trust reserve, partly because it is so small and partly because it is entirely located on a disused railway junction. However, it completely exceeded my expectations. The variety of orchids was greater here than I have ever seen in one location. We walked here from the campsite and it didn’t take long to spot seven species of orchid: lesser butterfly, fragrant, twayblade, marsh helleborine (just coming through), fly, northern marsh, common spotted and many hybrids of northern marsh and common spotted.

As we headed into the Lake District we stopped at the small village of Church Brough, seeing spotted flycatcher in the churchyard, siskin and redpoll on garden feeders and a large fungus known as dryad’s saddle growing on the ash tree in the castle grounds (English Heritage and free). On the other side of Brough is a Cumbria Wildlife Trust nature reserve at Augill Pasture.

We headed for Acorn Bank, a National Trust property near Penrith, as I’d told Sarah that we could have the afternoon ‘off’ wildlife and do ‘touristy things’, instead. However, as soon as we arrived, the lady at the entrance saw my camouflage T-shirt and told us about the wildlife hide and the great crested newts in the pond. And, floating near the surface of an ornamental pond and basking in the sun, were about six great crested newts.

Soon we were in the Lake District National Park on a Caravan and Motorhome Club CL at Glenridding and enjoying an evening stroll on the banks of Ullswater. Our days were spent catching a ferry to Howtown and walking back, climbing Helvellyn, visiting Aira Force and hiring a canoe for a couple of hours on Ullswater. Alfred Wainwright (the renowned fell walker and guidebook author) described the route between Howtown and Patterdale as “the most beautiful and rewarding walk in Lakeland”.

Aira Force is a pretty waterfall on land owned by the National Trust. Thanks to the Ullswater Way, which completely circumnavigates the lake, it’s a pleasant walk that meanders through Glencoyne Wood, which is particularly rich in birdlife. In the woods around Aira Force, visitors are told to watch out for red squirrels. The best place to look for them is next to the picnic site where they are attracted to a feeder.

On our way to our next site, we drove over the Kirkstone Pass and stopped at Brothers Water for a walk through the woods. As well as the omnipresent spotted flycatchers, which (I hate to say) I was now starting to take for granted, we also saw a few wood warblers. These delightful little yellow and white warblers are specialists of upland oak woodland in the western side of Britain. Difficult to see, they are anything but difficult to hear, their coin-spinning-on-a-plate song is as distinctive as any warbler.

From the National Trust campsite in the Great Langdale valley – an area dominated by dramatic mountains – we spent two days walking. Our walk from Elterwater around Grasmere and Rydal passed not one, but two, of Wordsworth’s houses (Rydal Mount and Dove Cottage). On the way to Loughrigg Terrace we saw yellowhammer, mistle thrush and tree pipit as well as bog pimpernel, sundew and butterwort growing. The damp slopes near the banks of Rydal are good for flowers, with a lot of bog asphodel along with cross-leaved heath, butterwort and sundew. We also saw common spotted orchids.

Our second Langdale walk took us up Stickle Ghyll on to the peaks of Pavey Ark and Harrison Stickle, both tremendously dramatic mountains with fantastic views. The Langdale Fells are, in my opinion, the most rugged and impressive mountains in England and, for that reason alone, the walk was hugely enjoyable. Less impressive was our wildlife tally for the day, though there was a worthy highlight in the form of a pair of ring ouzels on the ascent from Stickle Tarn to Pavey Ark, which I saw at a closer range than ever before.

Our final nights of this trip were spent at Braithwaite Fold, a well-organised Camping and Caravanning Club site in a great location next to Lake Windermere and Bowness and perfect for a visit to another obscure little nature reserve owned by Cumbria Wildlife Trust: Barkbooth Lot. The circular path around its perimeter is only 1¼ miles but, for its size, Barkbooth Lot has a good mixture of habitats and boasts a wide range of species. These include roe deer, adder, grass snake, a great range of dragonflies (including downy emerald) and birds such as redstart, garden warbler, tree pipit and yellowhammer. More importantly for me this is a very special reserve for butterflies.