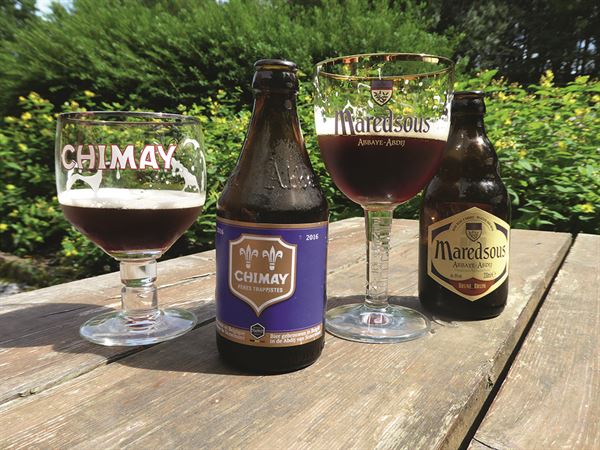 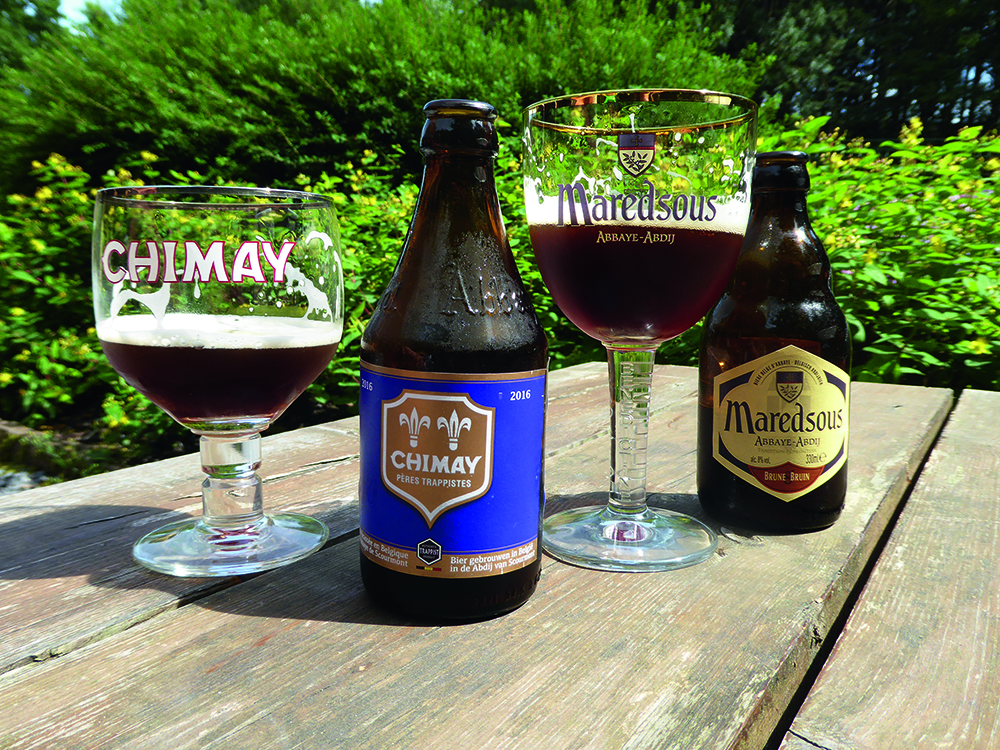 Over the last few years, we’ve taken some long trips across Europe, often in pursuit of the sun and always with a hefty Bongo fuel bill to show for it. With some good weather forecast not far from British shores, it was with a sense of relief that we set sail for Belgium.

We often stop in Belgium en route south, but rarely consider it for a holiday in its own right, it not having a great many vineyards of note – our main area of interest. However, we decided that if we were going to do Belgium properly we would embrace what it does do well – beer, chocolate, street art and saxophones!

Arriving in Dinant, we were met by the sight of dozens of enormous colourful saxophone sculptures lining the bridges and streets. Antoine Joseph (known as Adolphe) Sax was born here in 1814 and experimented with a range of saxhorn instruments before patenting the saxophone in 1846. Dinant is justifiably proud of this heritage and, as well as the ‘sax in the city’ sculptures, there is a free exhibition in honour of Adolphe Sax and his instruments. La Maison de Monsieur Sax is an interactive experience with extracts of music, sound effects and visual images designed to challenge and delight.

Dinant’s striking setting is alongside the River Meuse; it looks as if the steep cliffs that form its backdrop were purposely carved in order to accommodate it. The dominating feature is the Collegiate Church of Notre Dame. Take a closer look and you’ll see that, just above this, is a nineteenth century fortified citadel. There are 408 steps from the church to the citadel. For the sake of weary (or lazy!) tourists in the heat, there is a cable car giving superb views of the city. At the top there is a war museum with exhibitions of weapons, uniforms and bunkers and explanations of Belgium’s role in the wars.

After all that history, it was time to relax and enjoy present-day Dinant. Our citadel ticket included a cruise along the Meuse. This is an excellent way to see the spectacular landscape from a completely different angle and a good distraction from the pastry shops and chocolateries lining the streets. But it wasn’t long before we gave into temptation...

Belgium has long been famed for its chocolate. It forged links with the African cocoa plantations in the 1800s – earlier than many other parts of Europe – and was, therefore, at the forefront of developing artisan chocolate according to ever-enthusiastic European tastes. The techniques, processes and traditions created were passed down within families and are now shared with, and imitated by, the rest of the world. We chose a small sample of treats and, despite the fact that they were much richer and sweeter than those we are used to, it wasn’t long before we were craving more.

Our chosen base for the week was a campsite in Han-sur-Lesse, with pitches alongside the canal in beautiful sunshine and tourist attractions in walking distance. Once we were pitched up we decided to make a dent in the stock of beers we had acquired en route. The Belgian brewing tradition is a long and noble one, originating in the twelfth century in monasteries as a means of generating revenue for the monks and developing into a wide range of tastes and styles, as high in strength as they are in quality. Their quality can be traced to the fact that the Church claimed the best land for its farms; sharing its bounty with lay people around the world was the least it could do in return.

According to Plato, “It was a wise man who invented beer,” and he had a point. In the Middle Ages beer was safer to drink than water and it was also full of nutrients. For this reason, many monasteries administered it freely to the poor and, since they were doing God’s work, the brothers wanted to make the best product possible. Their skills increased and their reputation spread. It is not often that we spend an evening sans vin on holiday but, for once, we didn’t miss it at all! Our array of beers – some tasting of hops, some of dark caramel, others of wheat or fruit – made quite a treat. We were soon being advised by Belgian motorhomers on how to use up any leftovers – a delightful one-pot dish of chicken cooked in Belgian beer that was easily accomplished in the Bongo – despite being ‘under the influence’ at the time! Followed by some Chimay cheese, it was a meal fit for the abbot himself. 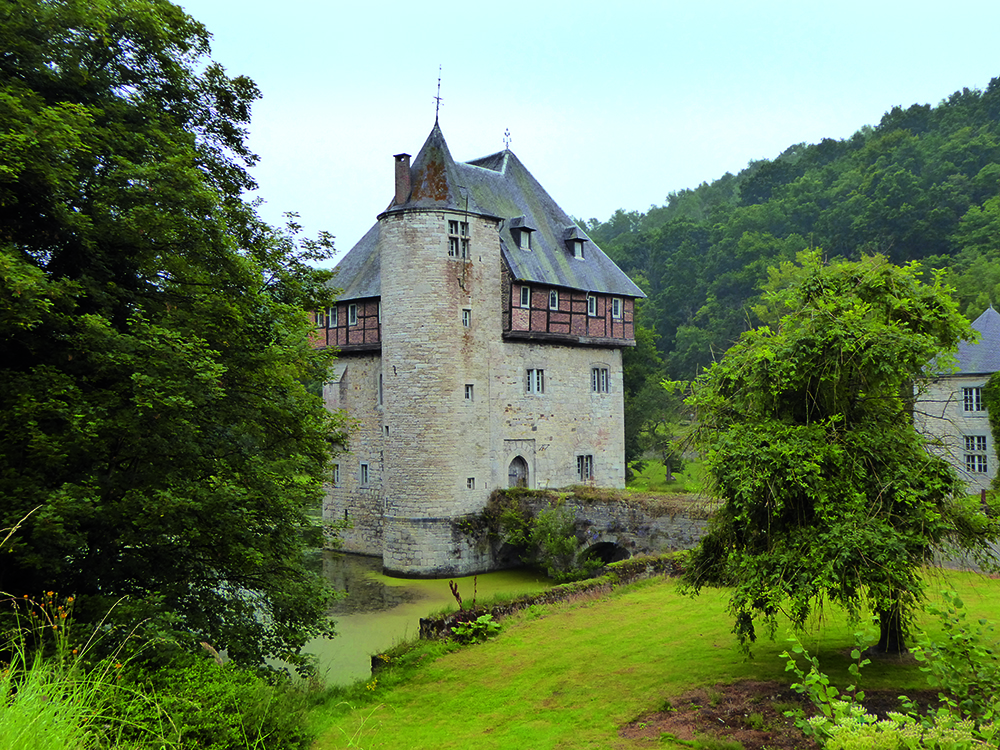 From this base, we were perfectly placed to meander around Les Plus Beaux Villages de Wallonie. This collection of pretty villages was drawn into public view in 1994 for their protection and promotion as tourist destinations. Each has something to offer, whether it is architecture, history, culture or just natural charm and beauty. Crupet, for example, has a grotto to St Antony of Padua and walking routes through the countryside around the village. There are several restaurants where you can sample traditional moules-frites and freshly caught trout from the River Crupet.

The most striking feature in the village, though, is the Château de Carondelet. This is actually a misnomer, being more of a dungeon and fortified farm than a castle, but one that is easy to forgive. This medieval building is just three storeys high but has all the features needed to earn its title: spiral staircase, half-timbering, a corner tower and a moat. It’s in private ownership (so no tours), but there’s a lovely circular walk through the valley that affords some excellent views and photo opportunities of this architectural jewel.

Celles sheds a different light on Belgium, having a Panther tank on display as a reminder of the German presence here in WWII. Celles is also home to the Romanesque church of St Hadelin, dating back to the eleventh century and being noted for its Chemin de Croix (Way of the Cross walk) and for having the oldest choir stalls in the country. The steep climb up the Chemin de Croix was more than worth the effort for the view of the village below. This was the furthest that the German army advanced in the Battle of the Bulge. The fact that this is now one of the most beautiful villages in the area is testimony to how far the country has come since 1945. 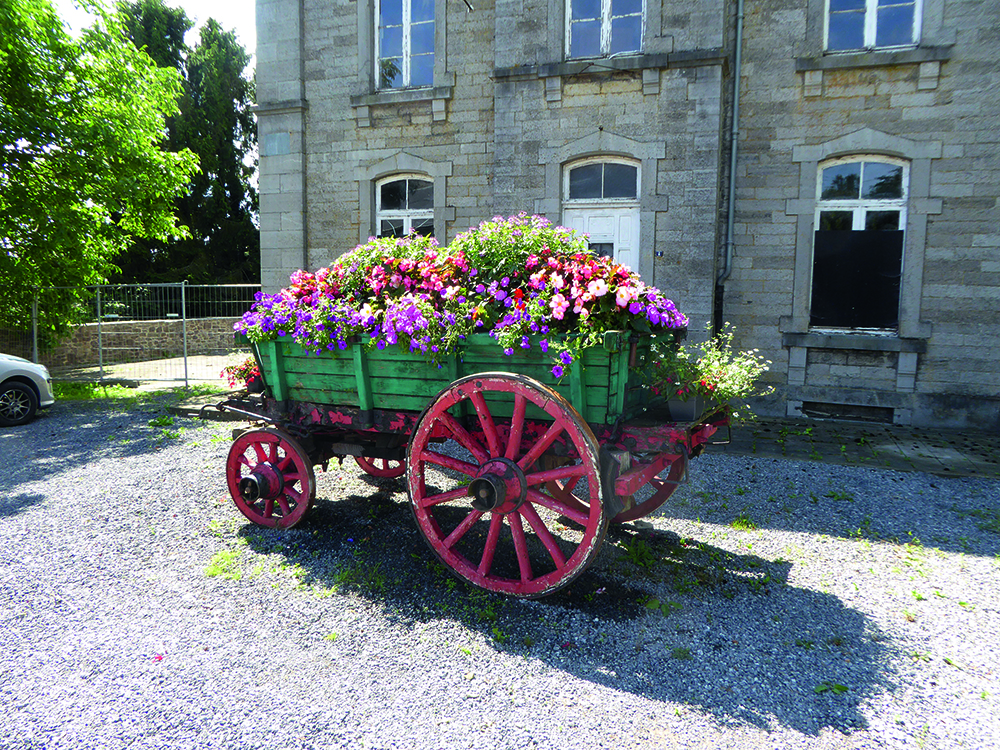 Other villages, such as Surice, Soulme and Rochefort, might not have the historical significance of others in the group but they welcome visitors with rustic artwork, beautiful buildings, châteaux and exuberant flower displays. In Sohier, even the bus stop has been given a complete floral makeover, illustrating the local expression, ‘A Sohier, tout se dit avec des fleurs’ (In Sohier, everything is said with flowers).

After four days of wandering peacefully around the villages we were ready to explore a larger town. Marche-en-Famenne has something for everyone – walks, bike trails, art, architecture, food and museums. Its urban regeneration project celebrates the traditional culture and the beauty of its natural surroundings alongside modern artwork, sculptures, dance and drama. The town itself has many restored buildings and streets and offers a wide range of places to eat and relax, priding itself on being at the forefront of gastronomy. If the bread we bought from the bakery was anything to go by, it has every right to be proud. The real beauty of the town, though, is its devotion to street art. Every corner and viewpoint contains a fountain or sculpture to capture the imagination. I was most intrigued by the sculptures in honour of the métiers vieux, or traditional trades, such as brewers, lace makers and chimney sweeps. 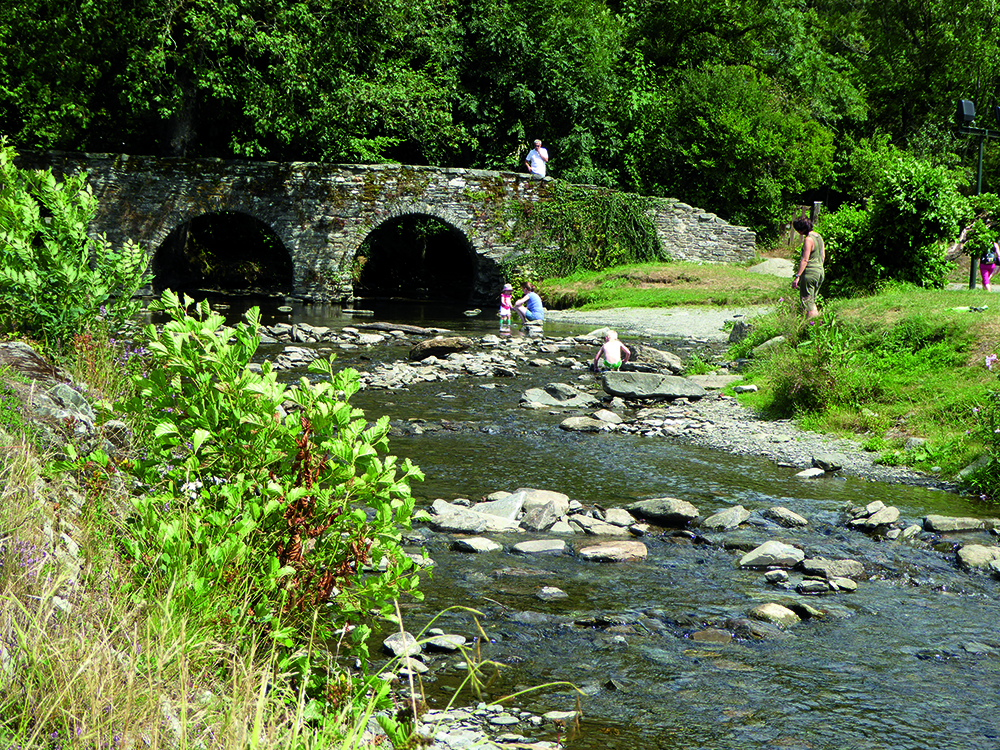 It was time to head north again and, having spent so much time appreciating the alcoholic benefits of the monastic traditions in the area, it would have been discourteous not to pay a visit to at least one monastery. We chose to explore the most important Cistercian example in the area, a fine building of immense proportions in Villers-la-Ville and began to understand the significance of the monasteries in the history and the future of the country.

This twelfth century site is one of the most complete in the whole of Europe. The fact that even the outbuildings have been so well preserved means that it does not take much imagination to gain a flavour of monastic life at the time. It takes a few hours to get around it all, especially if you want to explore the gardens, which have been carefully reconstructed to display the medicinal herbs, culinary and aromatic plants that were grown here when it was inhabited. The beer that it once produced has been recreated from archived recipes in a micro-brewery on site.

Villers-la-Ville is still thriving around the monastery and there can be few places as delightful as this for a day out. With the majestic remains of the monastery in the background and relaxed gastronomy on offer, it was easy to see why so many people chose this place to while away a sunny afternoon. This settlement encapsulates so much of the spirit of Belgium – the history, traditions and culture that have been maintained and developed in a way that means it will always have something unique and exciting to celebrate. Try it once and you’ll be back for more – and, no, I don’t just mean the beer!