Motorhome travel: A weekend on the Lancashire coast 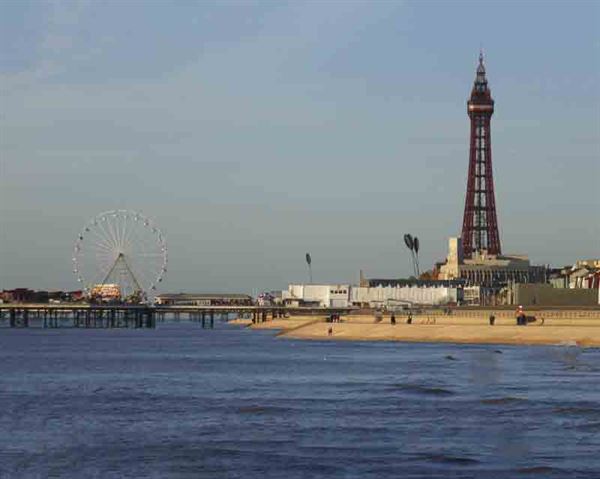 Carol Kubicki heads to the Lancashire coast for a weekend break and with hopes of spotting the first signs of spring...

It was one of those glorious sunny and frosty February days when we rolled into the farmyard of Cobble Hey Farm and Gardens, high on the slopes of the Lancashire Bowland Fells above Garstang. Climbing out of the ’van, I caught a whiff of spring in the air.

Snowdrops signal the hint of spring

We were here to see snowdrops. These tiny white flowers are both hardy and delicate, symbolising hope that spring will arrive.

On this exposed fellside is a unique woodland garden, created by Edwina Miller over 20 years. Between the winding paths and streams, Edwina has planted a host of different varieties of snowdrops. The common snowdrops have naturalised under the trees and there are plantings of rarer snowdrops, interspersed with occasional pink hellebore and daffodils. 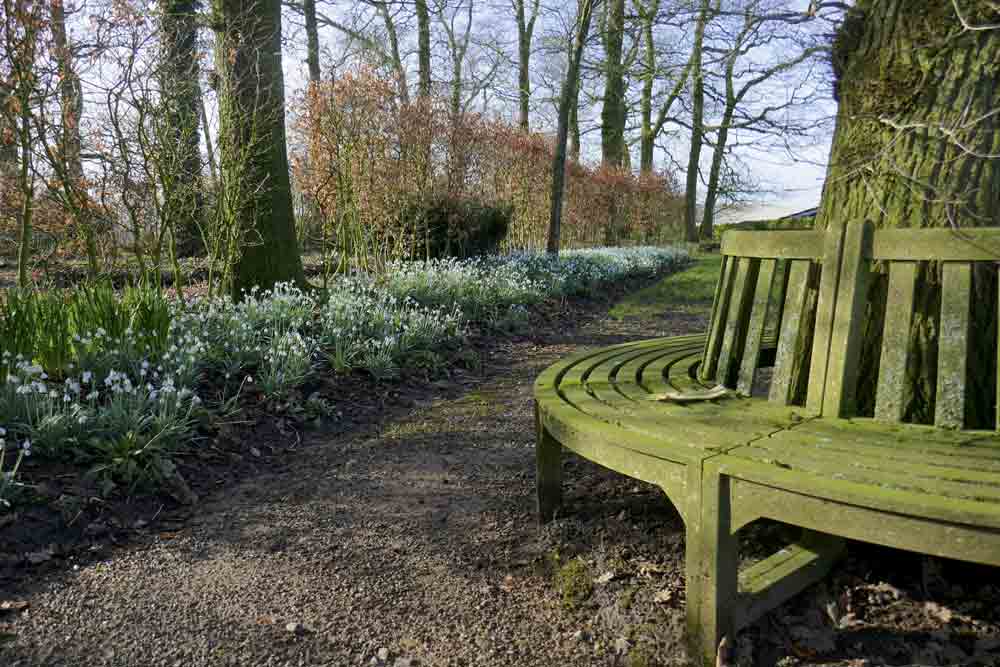 Wrapped up against the cold, we explored the gardens. I found Edwina working in the garden. “You have to look closely at snowdrops,” Edwina told me and she was right; with her help I found ivory-coloured snowdrops and others with yellow stems.

The farm is managed for wildlife and Edwina talked proudly about the increasing number of lapwing on their land. We watched a small group fly over in the sunshine, enjoying their calls and turned to the view. “You can see the Isle of Man on a clear day,” Edwina assured us.

In the barn a group of children were watching a tiny lamb being hand-fed and another youngster was feeding the goats in the pens, trying desperately to make sure the eager goats each got a fair share. Later we saw the children heading up the field with the goats on leads.

It wasn’t clear just who was taking who for a walk.

From Fylde to Fleetwood

We drove across the Fylde coastal plain to Fleetwood, north of Blackpool, passing the impressive statue celebrating the town’s Fisherman's Friend factory. With none of the glitz of Blackpool or the swank of Lytham St Annes, I have always had a soft spot for this former fishing port and unpretentious seaside resort.

The grand curve of the North Euston Hotel gives a clue to Fleetwood’s railway history. Created on a wild area of sand dunes in the 1830s, the steamer to Scotland docked in Fleetwood until the rail link north was built in 1847. We enjoyed lunch among the faded glamour of the hotel and then climbed The Mount, once a large sand dune, to the pagoda-style pavilion.

Following the seafront we found Fleetwood’s newest attraction, Rossall Point Watch Tower. Knowledgeable and enthusiastic coastguard volunteers staff the tower and they loaned us binoculars to watch the waders on the expansive bay and a group of linnets on the dunes, the Isle of Man ferry and the Lake District Fells on the horizon.

We had chosen a small and peaceful campsite inland between Fleetwood and Blackpool. The site is conveniently near to a bus route and the next day we set off to explore the Fylde Coast armed with a day ticket for the bus and tram.

We planned to quickly change buses in Blackpool for Lytham St Annes, but immediately got distracted by Blackpool’s attractions. The front has been spruced up and is perfect for strolling. 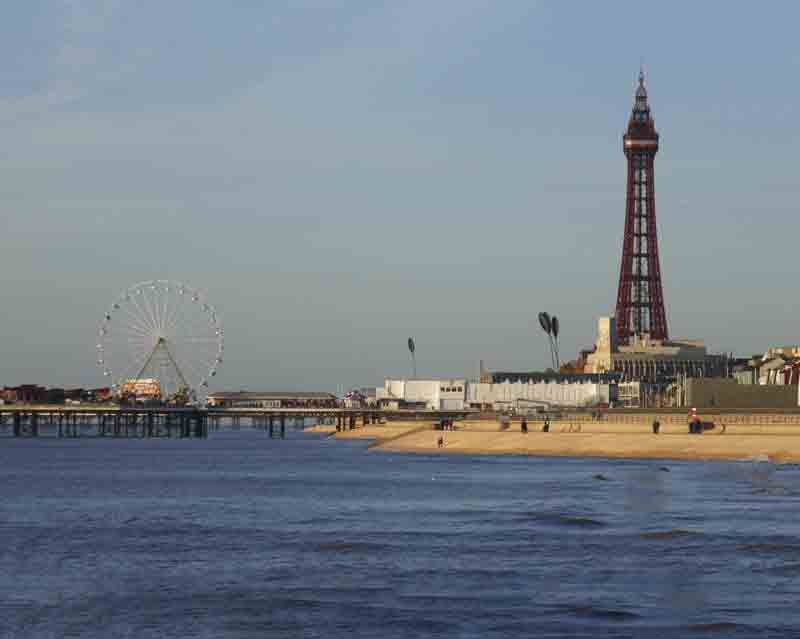 Blackpool celebrates its relationship with entertainment at the Comedy Carpet, an outdoor paved area of 160,000 granite letters below the tower. This is flat public art that you can walk, run or skip over. But, just like we were doing, most people wandered, looking down and reading, laughing and sharing their favourite quotes. The work of more than 1,000 comedians and writers are here: jokes, songs and catchphrases from variety to the present day and we easily spent an hour here.

We took in the splendour of the Winter Gardens and coffee in a smart seafront coffee bar before catching the bus south to Lytham St Annes, with its chic shops and pretty windmill on the green. After a stroll to look out over the sands, we walked across town to Lytham Hall in bright February sunshine to follow its snowdrop trail. 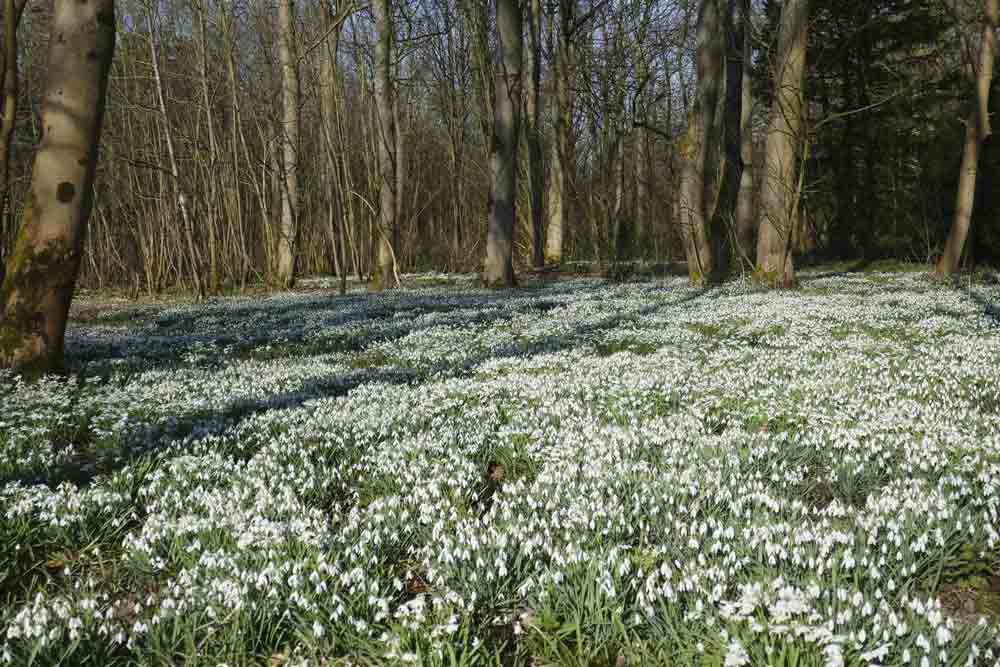 Lytham Hall was a grand family home and then offices until the 1990s when the 78-acre estate came up for sale. British Aerospace (a local employer) donated the almost £1m asking price and Lytham Hall is now run by and for the local community.

This handsome eighteenth century house no longer has a bevy of gardeners and today, the work is undertaken by local volunteers. The February weekend snowdrop events at Lytham Hall are popular and we joined the throng in the extensive woodland gardens, stooping to get a close-up view of the carpets of bright white droplet flowers.

After lunch in Lytham we took the bus back to Starr Gate, Blackpool, thinking we would take one of the new trams the rest of the way north, but the sun tempted us to walk and enjoy the sea air. On the way we were entertained by a huge, glittering and rotating disco ball and we watched awestruck as the Big One roller coaster repeatedly hurtled down the almost vertical dip in free fall, the passengers’ screams floating out to sea.

The waves were lapping up to the sweep of undulating honey-coloured steps that lead down to the beach and visitors were sitting and gazing at the setting sun. Blackpool Tower glowed warmly in the intense evening sunlight.

We bought a bag of freshly made doughnuts and sat on a pebble-shaped bench happily munching through the crunchy sugar-coated outside to the soft filling as the light faded.

Taking a peek at the nearby restored Marsh Mill windmill on our way the next morning, we headed to Hoghton Tower, near Preston, for the farmers’ market. We came away with plenty of Lancashire goodies: cheese pies, chocolates, handmade beeswax lotions and a string of Ormskirk onions. 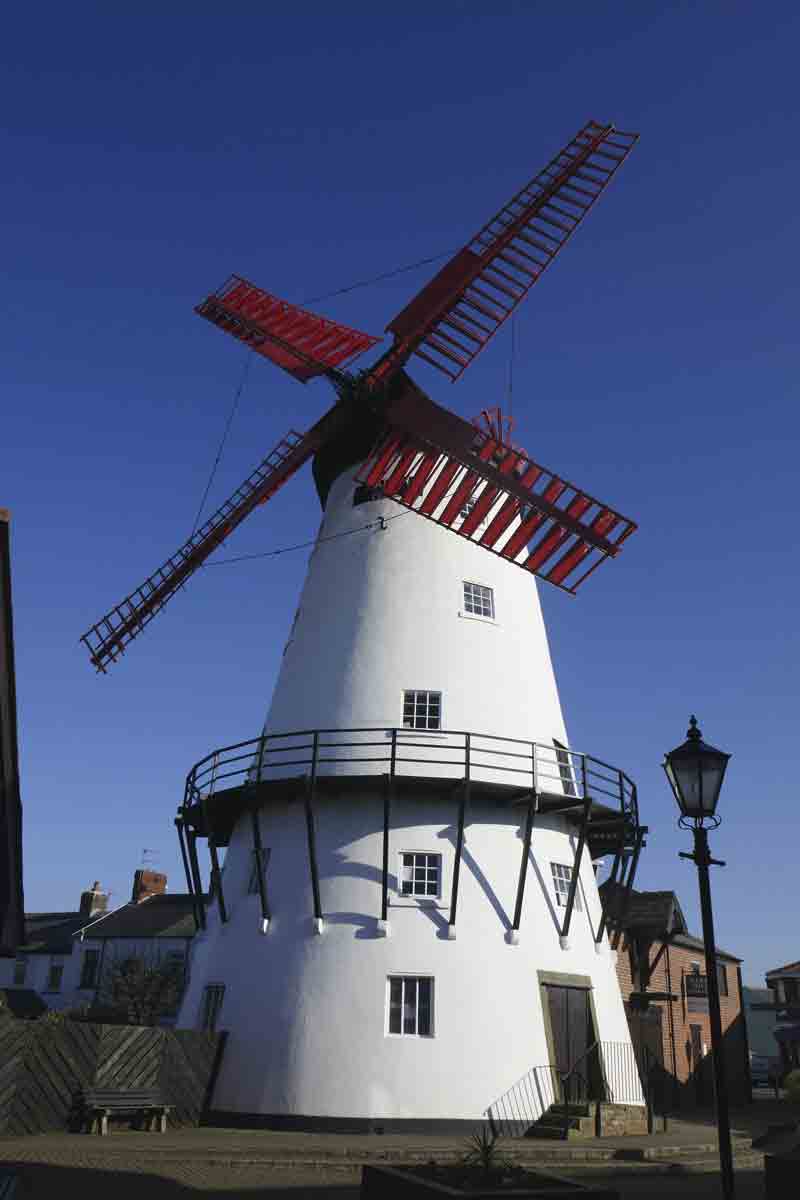 We headed to Bank Hall, south of Preston, for our last snowdrops. Surrounded by trees, this mansion is hidden away from the main road. Empty since 1971, Bank Hall has deteriorated considerably. It appeared on BBC2’s Restoration programme and a local group is working hard to save it.

Parts of the house are being renovated and the woodland grounds are open regularly. We sauntered through rafts of perfect white snowdrops naturalised over hundreds of years; these snowdrops can truly be described as a spectacular carpet.

The snowdrops had lived up to expectations and my confidence that spring was just around the corner had been reinforced.

This feature originally appeared in the January 2019 issue of MMM magazine - to buy a digital back issue, click here