Motorhome travel: A weekend in Falkirk 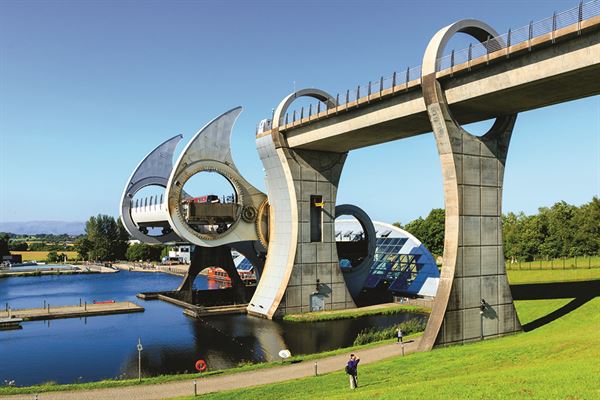 The forecast is for a heatwave over the next two days, so I decide to grab the moment and head off in Stella, my motorhome.

My neighbours are quite surprised to hear that I’m going to Falkirk, in the Central Lowlands of Scotland, as it isn’t renowned as a holiday destination. Lying equidistant from Glasgow and Edinburgh, this town was the cradle of the industrial revolution, famed for its iron and steel industry. But those times have passed and, since the turn of the millennium, Falkirk has regenerated itself and turned industrial wastelands into leisure parks that contain innovative attractions. 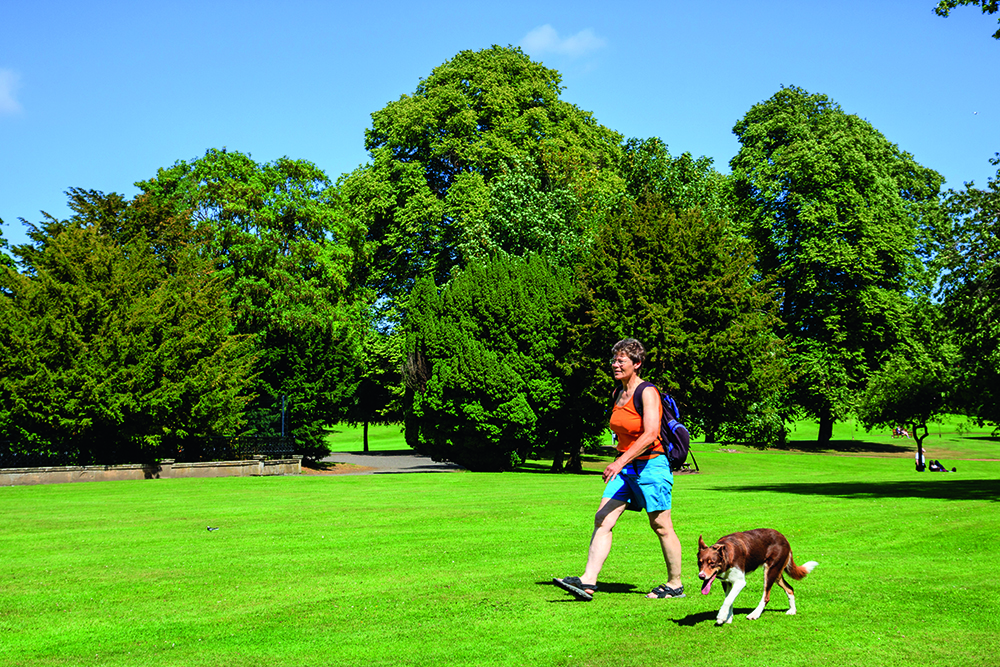 Motorhoming around the Helix

My first destination is the Helix, an ecopark transformed from 350 hectares of disused land between Falkirk and Grangemouth. Now, paths weave around woodland and wetland to a large lagoon, set in grassland with play areas. But the main attraction is the Kelpies: giant steel sculptures of two horse heads that have become a major landmark since they appeared in 2013. They stand either side of a newly built section of the Forth & Clyde Canal and are part of a project that has reopened the waterway to leisure craft.

Various online forums suggest it as a place for wild camping. Problems with boy racers are mentioned, but recent posts report good overnight experiences. It’s only an hour’s drive away and, when I arrive mid-evening, I see two yellow-jacketed men standing in front of traffic cones. They direct me into the smaller Helix car park, where I drive along the nicely paved surface to the far end to join a couple of other motorhomes.

To check that it’s OK to overnight, I go to speak to these friendly security guards, who say I’ll be fine. It seems that in the evening they block off access along the road to the larger, gravel Kelpies car park. I ask them whether the Kelpies will be lit up tonight and one of them gets out his phone to show me his photos. “The lights come on every day after dark. It’s worth staying up to see them. The colours gradually change through blue, green, yellow, gold and red,” he enthuses.

Once the idea is planted, I find it irresistible. So, I wait until it looks pretty dark then go for a midnight stroll with camera, tripod and Braan, my dog. The enormous sculptures rearing overhead look so lifelike, with bulging neck muscles and flaring nostrils. I am entranced by how their gaze follows me as I move around them. Their aura seems to transform from proud and fiery to noble and aloof as the colours change from hot to cold.

In the morning I take Braan for a walk around Helix Park, where runners, dog walkers, cyclists and families are all enjoying the outdoors. Children are jumping into a forest of little fountains in the splash play area and the Plaza café is just opening up. Leaving Braan in Stella, I walk along the canal to the visitor centre to join a tour of the Kelpies. 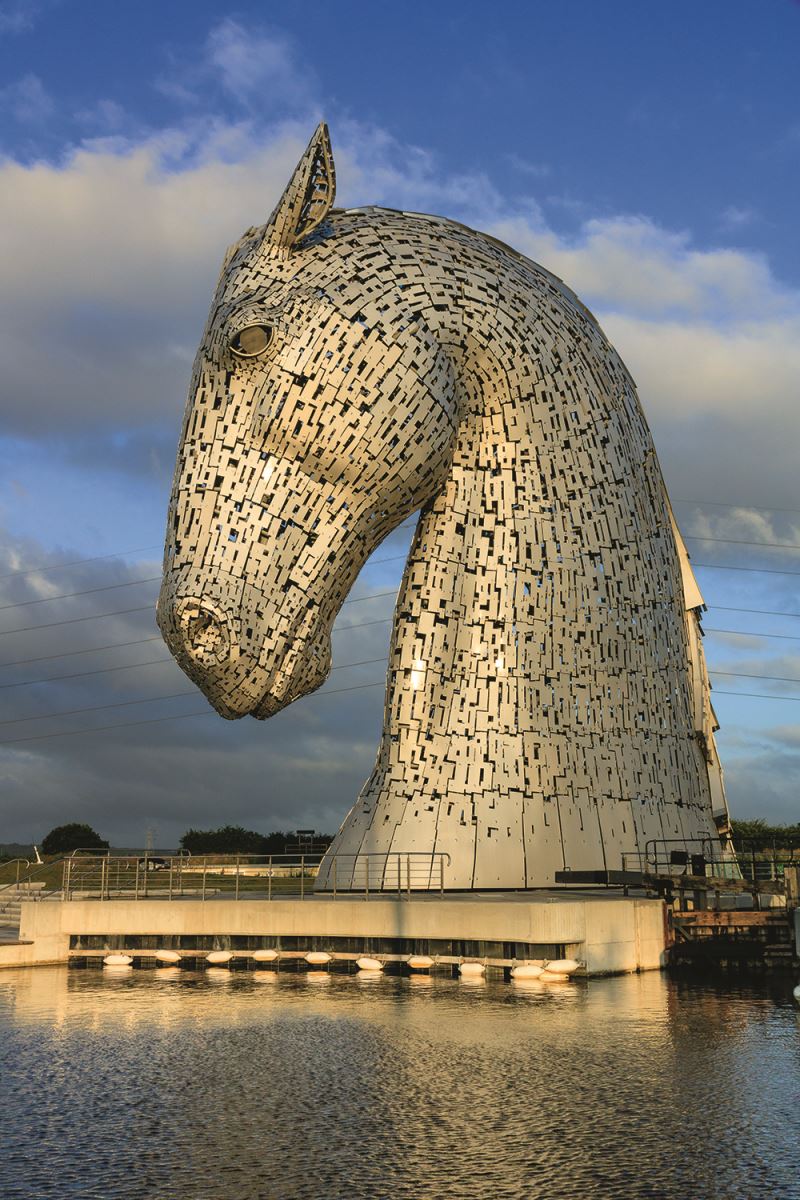 Our tour guide, Ross, explains that Kelpies were ancient Scottish water spirits that shapeshifted into horses when they emerged from the water. Sculptor, Andy Scott, chose to portray horses because they played an essential role by pulling barges along the canal, which was built in 1773. He modelled the heads on two Clydesdales, Duke and Baron, that he brought into his studio for close study. No wonder they are so lifelike!

The day has turned very hot, so when I drive to Callendar Park for the afternoon I’m glad to find the one parking place in the sloping car park is under the shade of a spreading oak. I wouldn’t want to bring anything bigger than a panel van in here as it’s a steep, tight slalom, but there is other parking by flats on the approach road.

I pack a picnic and set off with Braan to explore the park, passing splendid Callendar House, built in the style of a French château. Entry is free to the fourteenth century house, which has historical exhibitions, art galleries and working Georgian kitchen, but it’s too nice a day to be inside. We stop at a bench on the edge of Callendar Loch for lunch then seek some coolness in leafy Callendar Woods.

We return along a deep ditch that marks the course of the Antonine Wall, which was the northern frontier of the Roman Empire from AD142-165. The wall stretched 37 miles from coast to coast across the narrow point of Scotland. It comprised a 15ft deep ditch and a 10ft-high turf rampart. The structure is now a World Heritage Site and the remains of it and forts along its length are still visible in several places.

My second night is spent four miles away at the Falkirk Wheel, the world’s only rotating boat lift. I arrive while the visitor centre is still open, so I can pay £15 for overnight parking and collect a key to the toilets and showers (for a £20 deposit). I park Stella in the large, upper car park overlooking the amazing structure. Built as part of the Millennium Link project to reopen navigation on the canals, it replaces a chain of locks that once linked the Union Canal with the Forth & Clyde Canal. These locks were demolished long ago, so a new solution was needed to transfer boats the 110ft height difference between the two canals.

Braan’s evening walk is along a network of paths to Rough Castle, about a mile to the west. This Roman fort is one of the best preserved parts of the Antonine Wall and uses a natural stream valley for defence on one side. The low-angled sun accentuates the dramatic earthworks, over which swallows swoop for insects. The grass around the fort is kept short, but elsewhere it is full of wild flowers: vetch, bedstraw and harebells.

At 5.30am the sun is glinting through cracks in Stella’s blinds. I peek out on a perfect blue sky, revealed as the mist melts away. It’s time for another early dog walk with my camera. Up close, the Falkirk Wheel is an imposing piece of engineering with massive concrete legs supporting the upper canal extension. On this calm morning, the water is mirror-like and from the top it looks like an infinity pool suspended over the landscape. 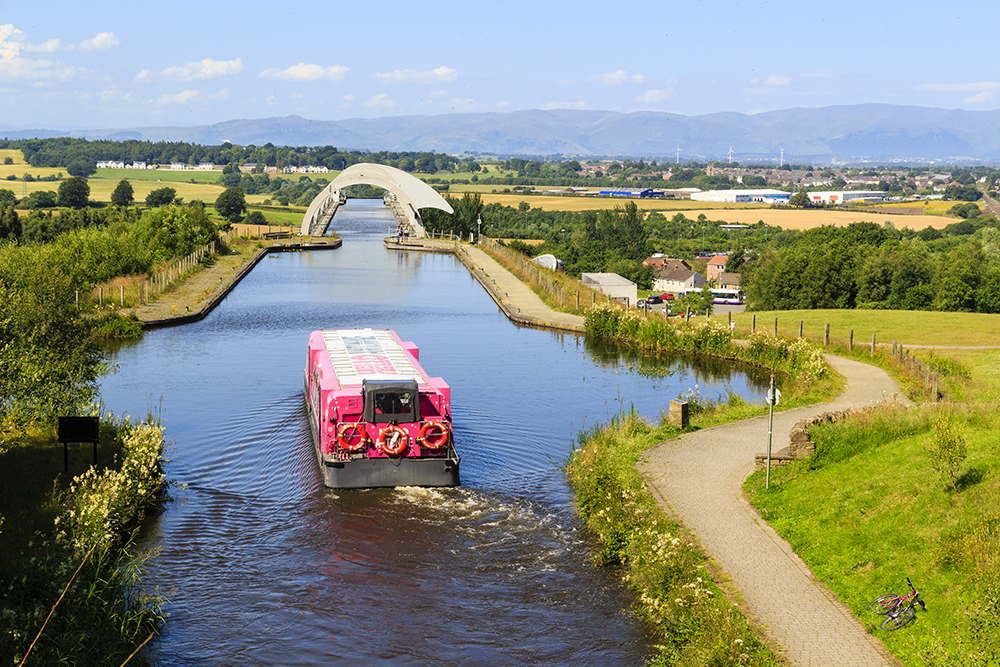 Later, I join a boat trip from the visitor centre at the bottom. Eddie, our skipper, tells us, “This boat is called Archimedes after the principle that allows the Falkirk Wheel to work. Any object displaces its own weight in water, so our gondola weighs exactly the same as the one above us, even though it is empty at the moment. Because the two are perfectly counterbalanced, it only takes 1.5 kilowatt-hours of energy to lift us, roughly the same as boiling just six kettles of water.”

It takes five minutes for us to ascend majestically to the upper level as the mechanism rotates 180 degrees. I hear no motors and, if it weren’t for my eyes, I wouldn’t believe we are moving. We cruise out of the gondola at the top and soon enter a tunnel that passes under the Antonine Wall and Edinburgh to Glasgow railway line. Coming back, we enjoy a panoramic view over the Central Lowlands and can see children having great fun in the water play park below.

By the time I return to Stella, it is baking hot and I’m glad that I left all the blinds shut to keep the sunlight out and the inside cool. Braan is keen for another walk and joins me on a bike ride to a dog-friendly café. We set off through the tunnel I’ve already sailed through, then pass two modern locks and rise up to the Union Canal towpath. Built in 1822 as a contour canal, it stretches 31 miles to the heart of Edinburgh without any locks but with the aid of spectacular aqueducts. We don’t want to go too far with temperatures so hot, so take a track uphill into cool woods with dappled shade.

Our return is down easy single-track cycle trails that weave through the woods to a clearing with a panorama over Falkirk, which looks surprisingly green from this angle.

Back at Stella I open the windows and sliding door to let a cooling breeze through and linger the rest of the afternoon enjoying the view. This short break has been one of my most enjoyable motorhome trips. Of course, the sunshine has helped, but I have been impressed by how ‘people-orientated’ Falkirk is. Its redevelopment has been designed to provide green travel corridors, as in northern European towns and loads of spaces for families to enjoy the outdoors. I’m leaving with pleasurable memories, loads of photos and a touch of sunburn.