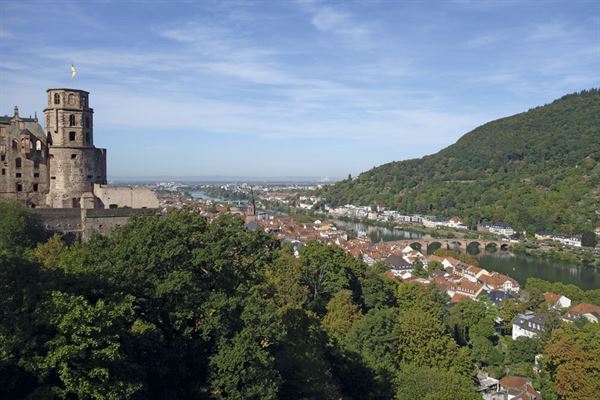 A Lancaster crew had to fly 30 missions to complete its tour and be retired. Oliver, who would have been my uncle, was a Pathfinder pilot on his twenty-ninth mission when he was shot down and killed over Heusenstamm in 1944. He was 21.

Photographs show him smiling, with his ‘wings’ proudly displayed and standing next to his mother, who looks perhaps less cheerful, but brave. My mother always said her older brother was “wonderful”. Several years ago, I took her to Oliver’s war grave near Munich, but it was only recently that we learned a plaque had been placed at the crash site itself, listing Oliver and the others of the crew who died that August night. We wanted to find it.

So, alongside the classic gothic/romantic stretches of the Rhine, Neckar and Mosel, this trip was also to be something of a personal pilgrimage.

St Goar am Rhein sits on the banks of the middle stretch of the ‘Romantic Rhine’. We dropped down into the gorge via a steep, hairpin road to stay at Camping Loreleyblick. Next morning, we were lucky enough to move to a waterside pitch so that we could watch the river traffic ply its trade. It was very pleasant in the early autumn light looking over the Rhine to the sunlit, steeply sided, wooded canyon with patches of nigh-on vertical vineyards.

This reach of the Rhine is a World Heritage Site. The romanticism of the Rhine was also embraced by the British painter, JMW Turner, in the early nineteenth century and he sketched and painted many scenes here. Three-quarters-of-a-mile downstream from the site is one of these, the ruins of Burg Rheinfels, perched atop rocky cliffs.

It’s a pleasant riverside walk from the site to St Goar, passing boarding points for the many cruisers taking day passengers through the 30-mile gorge. We explored the ruins of Burg Rheinfels, which grew rich and powerful by levelling high taxes on all passing river traffic – a very lucrative business. Then along came Napoleon and, rather than suffer a siege and the expense of warfare, the leaders surrendered, Napoleon marched in and blew up the castle!

Opposite the campsite, the Siren sits near the Loreley rocks. Legend tells that the siren would call sailors to their doom by combing her long blonde hair and singing beguiling songs. Distracted, the sailors would steer their boats onto the rocks and drown. Fortunately, the sailors of today are made of sterner stuff and passengers aboard the enormous river cruisers can sip their Riesling in safety as they admire the statue.

We rode south along the dedicated, flat cycle path to the picture-postcard towns of Oberwesel and Bacharach. Here we found classic half-timbered houses, ‘winestubs’ and windowboxes of red geraniums.

We crossed the Rhine by ferry in St Goar to walk up past Burg Katz, which stands almost opposite Burg Rheinfels, and into the hills above. The Forstbach Valley and its ancient woodland were tranquil, with acorns and leaves constantly falling.

By luck we were staying during the Rhine in Flames spectacular. From Campingplatz Loreleyblick we cycled three miles, following a remarkable flotilla of some 50 large pleasure craft. With all the boats in place, a firework display lit up the Rhine, turning Oberwesel red – and all to the music of Pink Floyd’s album The Dark Side of the Moon!

On our final day we rode up into the hills behind Bingen before eventually dropping back down into Oberwesel. As we freewheeled down a narrow street, there came the sound of a brass band. My wife, Lizzy, and I thought perhaps it was our welcome and reward for 40 miles of cycling (albeit electric-powered). Actually, we’d arrived to witness the superb Wine Parade (3pm) with a concert, bands, people dressed in medieval costumes and tractors pulling carts carrying blonde maidens. 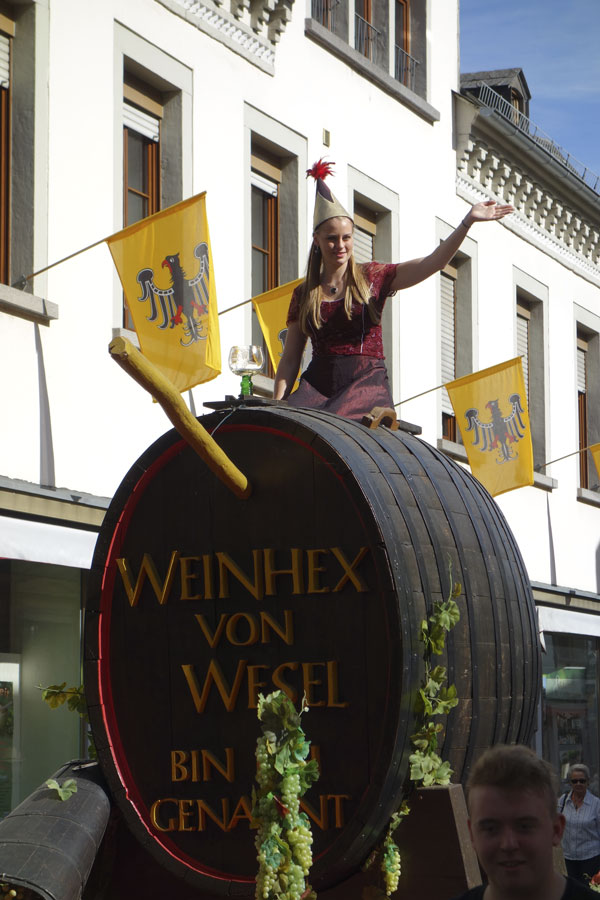 It was time to leave St Goar and Oberwesel’s wine celebrations and head about 140 miles east to Heusenstamm in search of a memorial plaque for the Lancaster crew. We negotiated the semi-pedestrianised road leading to Heusenstamm’s railway station and shoehorned the ’van into its small car park. We didn’t know where the plaque might be.

A path from the parking led past well-tended allotments towards an avenue of trees in early autumn colours. I don’t know why we went that way as there was no signpost, no marker, but we found the plaque tucked by a hedge in this pleasant part of Heusenstamm.

It’s only small, attached to a simple rectangular stone and you wouldn’t know it was there unless you were looking. Oliver’s name and those of his fellow crewmen who died that night are engraved on it. We have no idea who placed the plaque there, but we are sincerely grateful. We bought some sunflowers and returned down the sunlit avenue to tuck them around the stone and pause a moment, thinking of that picture of Oliver with his arm around his mum, standing in the family garden.

It was in something of a reflective mood then that we returned to our Chausson and on to Neckargemünd in order to visit Heidelberg and its famed castle. We pitched up at Campingplatz an der Friedensbrücke and took a place right on the river bank.

Neckargemünd once boasted of being an imperial city. It’s pleasant, with some quaint old streets running down to the river and warped, half-timbered houses. Though it’s possible to take a scheduled boat service down to Heidelberg, or buses and trains, we chose to ride the six miles along the riverside cycle path.

Schloss Heidelberg is grand, though mostly a ruin now, having been destroyed by the French in the late seventeenth century – despite the 5.5m-thick walls of the tower. It’s situated high in the wooded hillside and oozes Gothic Romanticism.

The garden terraces are enormous and the views over the Neckar worth the climb. 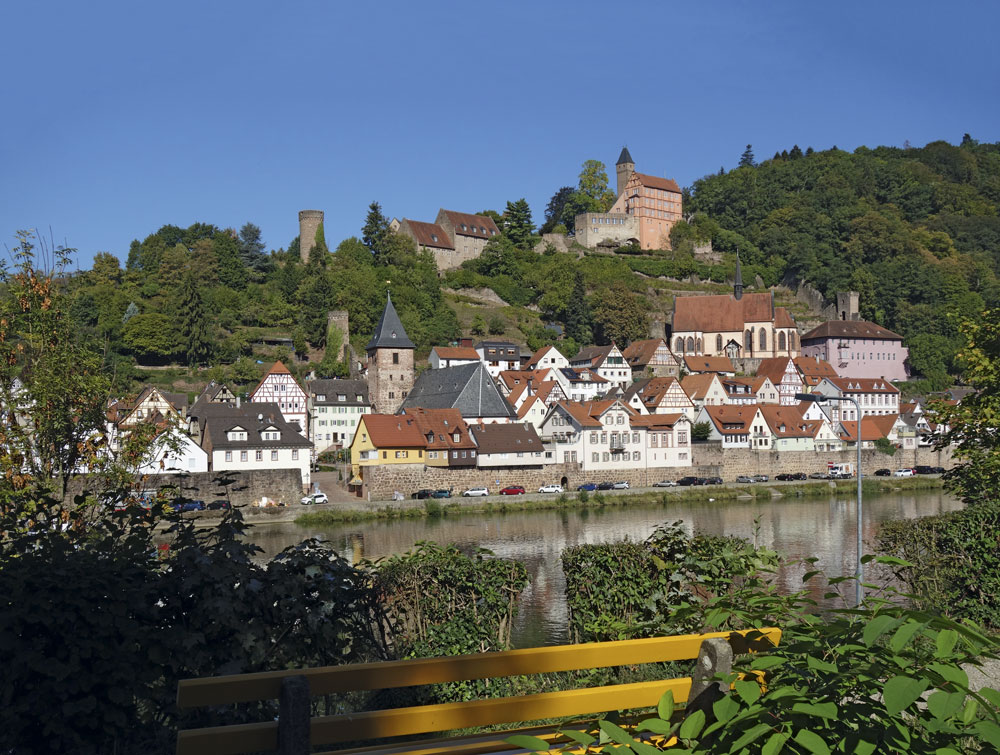 The terraces are free to enter and, once you’ve fought your way past the many tourists clamouring to enter the castle, the grounds are peaceful and pleasant.

Heidelberg’s town centre has grand buildings and squares, its cafés and restaurants seeming to cater mainly to the river cruise trade. Lizzy thought the all-year Christmas shop an especially good example of its kind, set in a grand old building with fine ceilings and staircases. A few doors away is an equally well-stocked shop, but selling traditional lederhosen and dirndls alongside vicious-looking knives, swords and crossbows that William Tell would have given his right arm for!

After another day cycling in early-autumn sunshine through attractive towns alongside the Neckar, it was off to an industrial world at Saarlouis. This was a visit to the sort of place that Oliver might have been most interested in professionally.

We reached the centre of Saarlouis from Campingplatz Saarlouis via the crossing of Vauban Insel, a mid-river island made up entirely of another of the seventeenth century French military engineer’s creations. The French had Vauban build it when they occupied the area at that time. 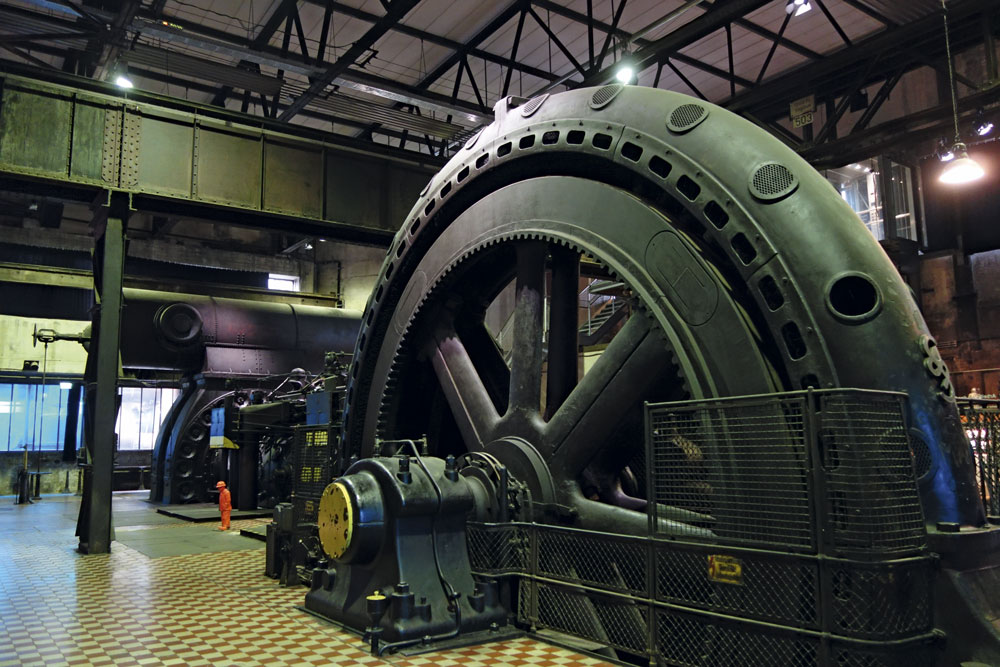 Our aim was to visit the enormous Völklingen Ironworks about 10 miles up the Saar, which closed in the 1980s and has been turned into an exhibition, museum and gallery that became the first industrial heritage World Heritage Site.

It’s a fascinating place, with much left as it was when it closed. The smells of metal, dirt, grime and grease are still there.

For the climb to the top of the furnaces you need good knees as scaling and descending the steep steel steps tests them out. You’ll also need to don one of the hard hats provided.

Within and alongside the huge industrial halls are art galleries and exhibitions. When we visited there was one of Banksy’s artworks (pictured below) displayed in the ‘bunkering pits’. In the turbine halls was an exhibition celebrating the life of Queen Elizabeth II. 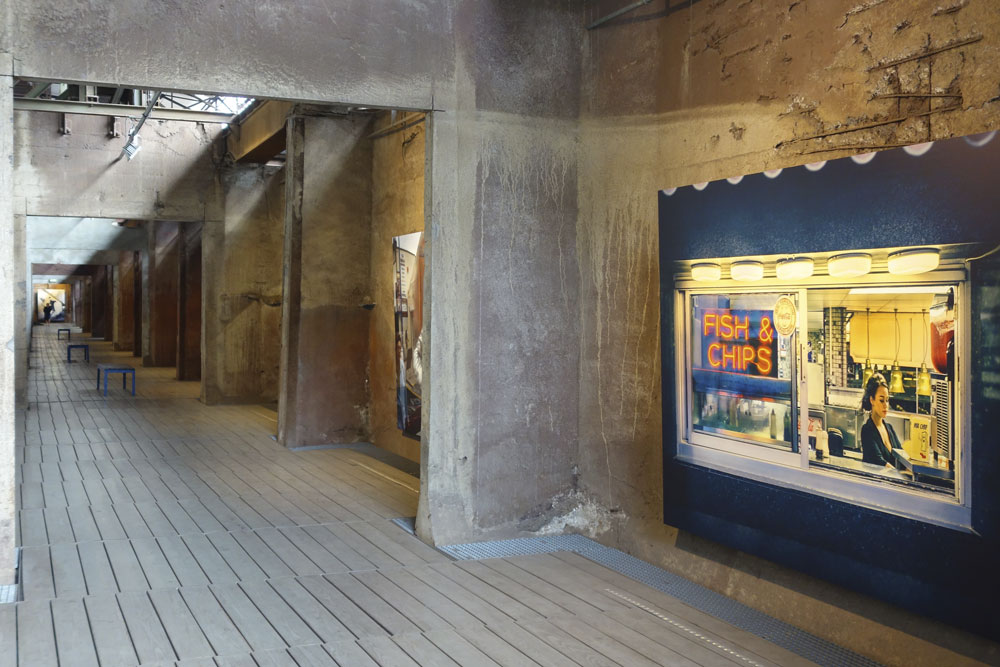 Our final ‘port of call’ was Treis-Karden on the Mosel. This is two towns joined by a hyphen and a bridge over the Mosel.

Campingplatz Mosel Islands sits where it says it does and we crossed its bridge to the mainland regularly, once to venture east to Moselkern and passing riverside vineyards, which climb the hillside and were heavy with grapes. Along a quiet side-valley behind Moselkern we cycled to the old mill, Ringelsteiner Mühle (now a hotel/restaurant).

From there it’s a two-mile streamside path up to the very grand castle, Burg Eltz. However, we tied up our bikes and followed a more circuitous route to Burg Eltz, one of the many detours from the clearly marked Moselsteig long-distance trail that follows the course of the Mosel.

An hour later, we turned a corner and there it was: Burg Eltz, on a rocky outcrop in the middle of a narrow valley. Suddenly there were lots of people and excited children as the shorter walk up from the old mill converged with our path at the narrow, stone, cobbled bridge crossing the gorge to the castle gates.

You pay to visit the rooms and exhibits, but the weather was so good and the outside was what we’d wanted to see, so we didn’t explore further.

That evening Lizzy collected ripe walnuts and returned with a bag, planning to bake walnut cake on our return to the UK.

Our trip had been a fantastic one. It had also been a pilgrimage to honour a lost uncle and to all who lost their lives in that horrific conflict.

This travel article was originally published in the September 2019 edition of MMM magazine. Buy digital back issue copies here or check out our full archive of motorhome and campervan travel features here.