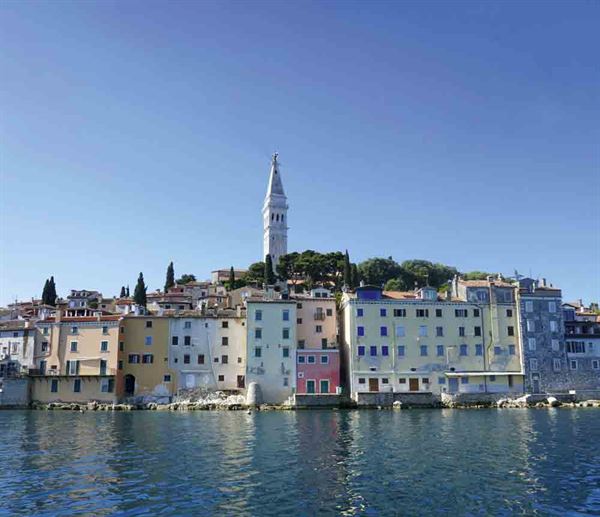 Carol Kubicki achieves a long-held ambition to visit Croatia - and encounters a country worth waiting for...

Finally, we have reached Croatia. We planned to visit some years ago, but got sidetracked in Slovenia. Croatia stayed on the wish list, but the next trip in that direction was thwarted by an accident in the ’van! This time, we drove with determination through Germany and Austria and shut our eyes as we sped through Slovenia, feeling a sense of achievement as we crossed the border.

The idyllic campsite near Duga Resa was a fantastic start; situated next to the crystal clear Mrežnica river and surrounded by rural lanes, vineyards and pretty farms, we spent hours walking, cycling and river watching.

Many visitors to Croatia skip Zagreb, which is a shame. It is a lovely capital and, with a railway station just five minutes from our campsite, made an easy day trip. Zagreb’s horseshoe of seven interconnecting parks makes sauntering to and from the city centre a pleasant experience. 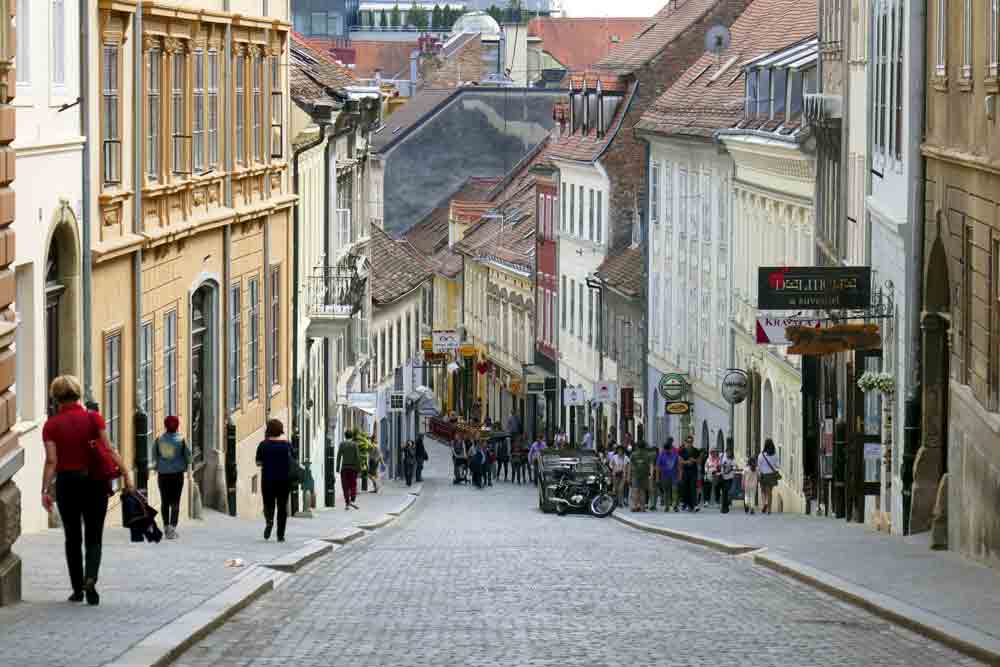 We enjoyed the large open-air market with stalls piled high with fresh produce and the unusual fortified cathedral. For lunch we sought out a regional speciality, Štrukli from La Štruk café whose only dish is this filling and tasty baked cheese and pastry fare that we walked off by climbing the steps to the old town.

At a viewpoint over the city a young couple were having wedding photographs taken. They looked blissfully happy and I hoped that their story wouldn’t end up in the nearby Museum of Broken relationships. Take a box of tissues when you visit this unique and quirky museum that displays mementos of relationships from across the world alongside heart-breaking stories.

Zagreb’s winding Tkalciceva is lined with cafés and we chose one to people watch over a coffee. In Croatia the cultural significance of coffee encompasses more than just a drink; being seen in the latest trendy café is a factor.

Croatia’s network of national parks is excellent and we headed south for Krka National Park. We generally shun organised tours, but at Krka the excursion offered by the campsite proved an excellent choice. 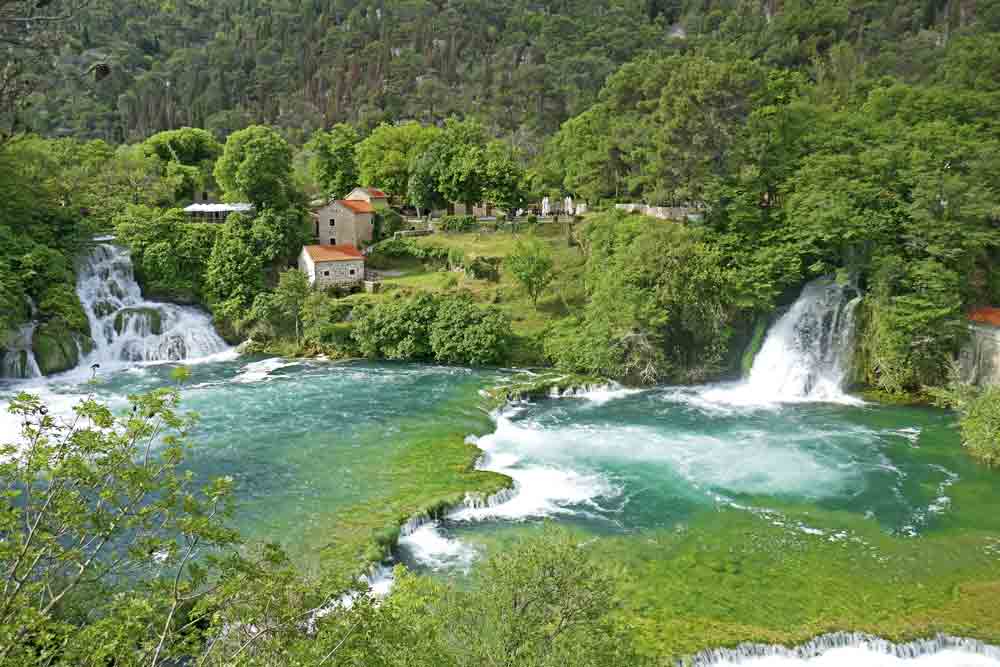 The day started early enough to miss the crowds at Skradinski Buk, where cascades tumble down 17 travertine levels. I happily wandered under luxuriant trees with submerged roots on walkways spanning rushing water. The roar filled the air, along with birdsong (including great reed warblers) and croaking frogs.

In the clear water we watched shoals of fish, while dragonflies danced around us. With different views around every corner of rapids and pools and, finally, the large falls and old watermills, this was captivating.

For the rest of the day, the minibus took us along narrow country roads with viewpoint halts over dramatic limestone gorges, an island monastery and more cascades. Lunch was served at an old mill, where we sat under vines and drank sharp Croatian wine with bread and local cheeses. The excursion finished with the tranquil and richly decorated Serbian Orthodox Krka monastery.

Šibenik was our first encounter with the Croatian coast. From the tidy esplanade we watched boats coming and going on the blue sea and explored the winding medieval streets up to a rambling and crowded cemetery, with the walls of the ruined castle above and stunning views over the town.

The mountainous Paklenica National Park, with limestone gorges, towering crags and excellent walking, was high on our list. At Velika Paklenica, we joined the throng climbing the valley trail. Ramblers and mountaineers were here, but most were lithe young climbers with their karabiners clanking.

To really experience Paklenica you need to leave this main trail and follow one of the steep paths up the canyon side. At the viewpoints the vistas over Velika Paklenica were stunning and we had them to ourselves. 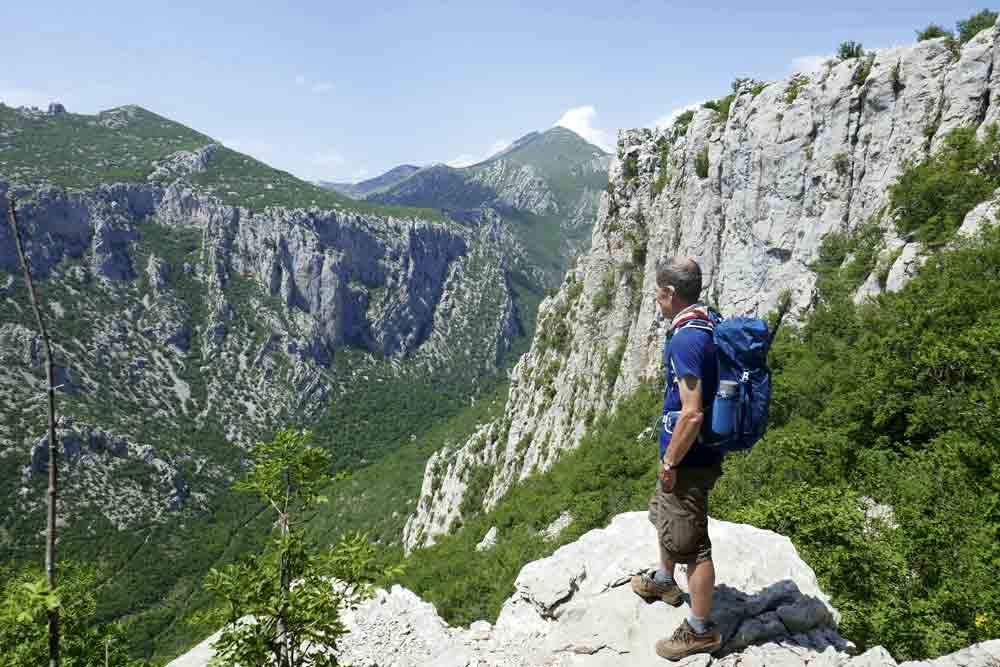 Velika Paklenica runs down to the sea near the resort of Starigrad and this makes a great base for exploring these mountains. We cycled along the old road that contours the slopes with views over to Pag Island and explored the coastal villages, finding Vecka Kula, a ruined Venetian castle, on a bay.

Despite loving everything about Paklenica, we had to move on. We headed north, calling in at Croatia’s must-see Plitvicka Jezera national park, a wonderland of 16 lakes with waterfalls running between them.

Well-made paths and wooden walkways snake among the sparkling waterfalls. The sweet smell of the elderflowers and the beauty of the landscape went to the head of one fellow who held up the crowds to kneel on one knee and propose to his girlfriend – another story I hoped wouldn’t end up in the Museum of Broken Relationships.

Rastoke, a settlement of restored watermills among water channels, wooden bridges and waterfalls in the town of Slunj, proved to be a hidden gem. 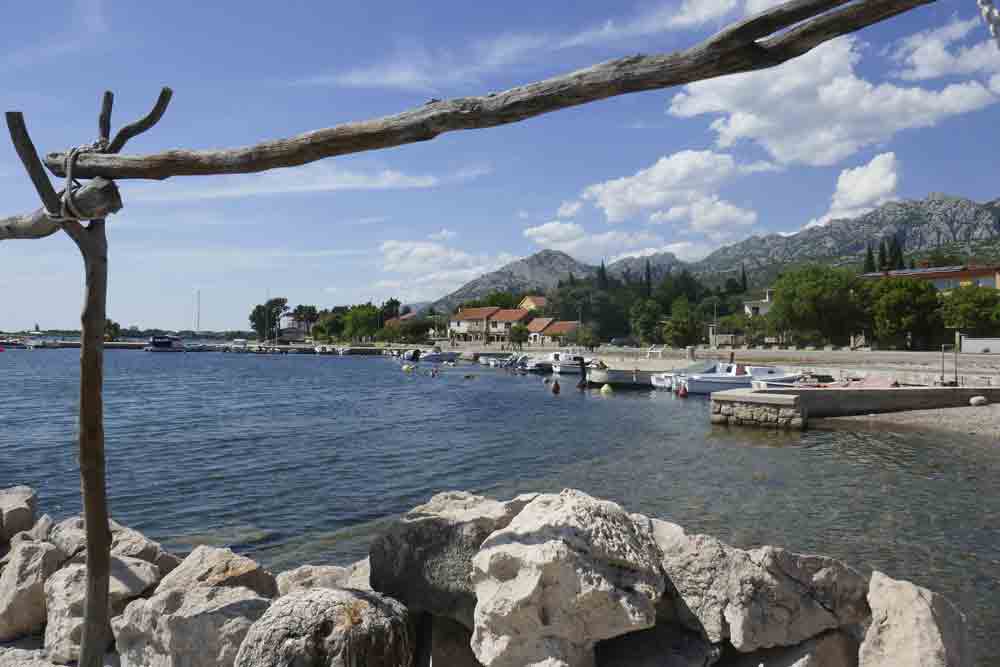 Keen to try some local cheese we followed a sign that took us along the track for over a kilometre. At the farm, I climbed out of the ’van and was greeted by four excitable dogs and the cheese maker. She took me into her well-stocked shop. I left happy with four wedges of her sharp and tasty award-winning cheeses.

We enjoyed discovering Croatian wine and food. Many wines are produced around the Samobor hills, west of Zagreb, and we had a stunning drive through this area of pretty villages and hillside vineyards.

The town of Samobor has elegant baroque and art nouveau buildings, a pretty river, woodland walks and lively parks and its main square is lined with cafés that are perfect for people watching. Many cafés offered the local speciality, kremšnita (a fluffy vanilla and pastry concoction). It would have been rude not to try it!

After a few days back on the coast visiting the headland town of Rovinj packed with colourful villas, I was itching for some walking in inland Istria. From the medieval walled village of Gracišce we followed the waymarked St Simeon Way, a 10km (six-mile) circuit that descends steeply to the Sopot waterfall, a captivating single 98ft drop into a blue pool.

From the camperstop in Motovun we followed sections of the cycle route along the truffle-rich and verdant Mirna River valley. In the sunshine this was idyllic level cycling.

I couldn’t have staged our last night in Croatia better. We climbed the winding cobbled paths to the beautiful hilltop town of Motovun. Sitting under the town walls at a restaurant terrace, we had views over vineyards and the luxuriant valley bathed in gold in the evening sunshine. We watched the sunset and raised our glasses to the wonder of Croatia. Third time lucky indeed!

The full version of this article was published in the March 2019 issue of MMM magazine - click here to buy a digital copy of that edition.