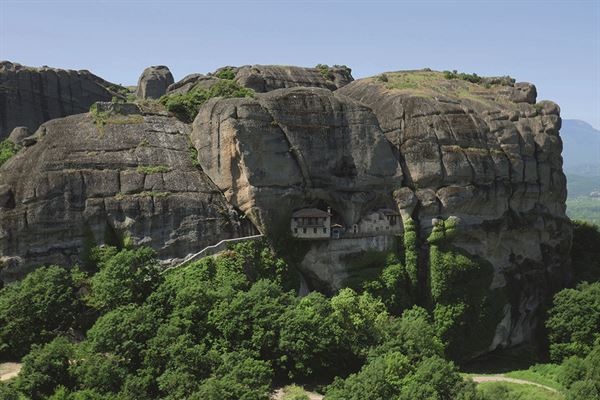 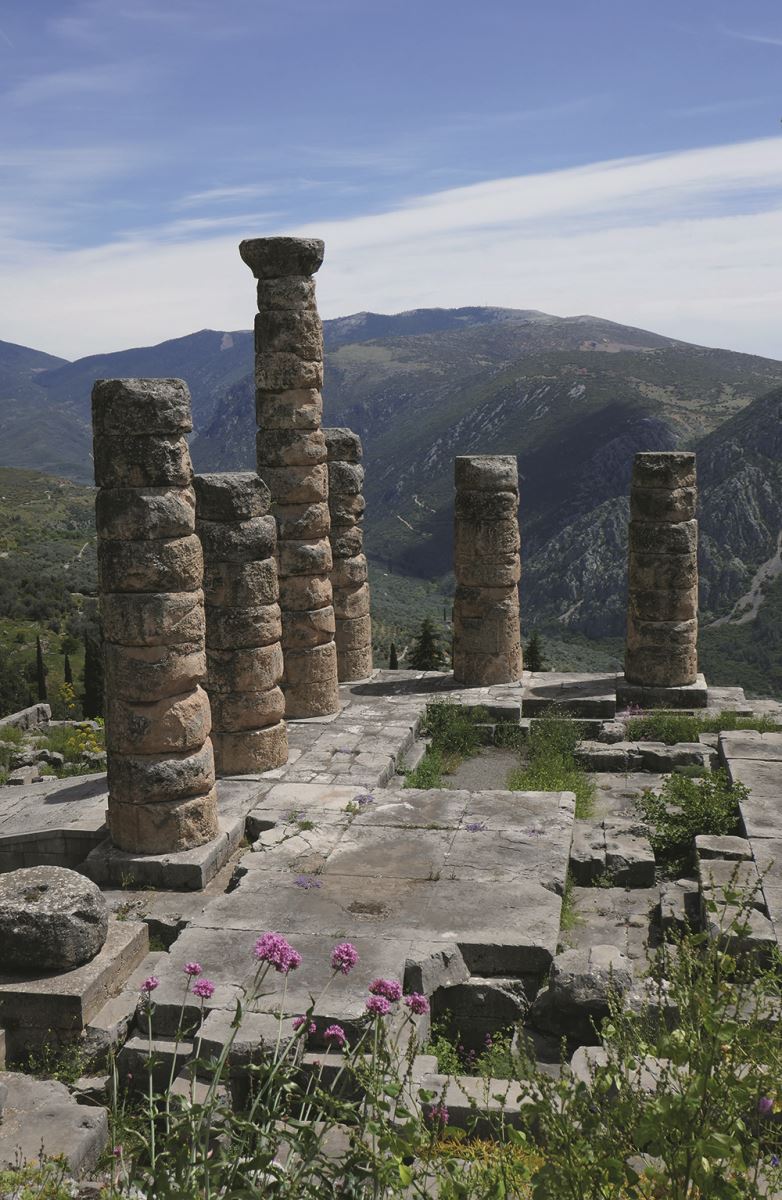 Even though taking our campervan to Greece had long been an ambition, the lump in my throat took me by surprise as I stood on deck watching the coastline of Greece unfold. I was about to find out how it matched the dream and, once on land and feeling emotional, I had my husband, Anthony, stop in a layby above the port of Igoumenitsa to take in glory of it all.

We drove south down the west coast of Greece, the Ionian Sea to our right. This peaceful coastline surprised me with lakes and wetlands. By Kalodiki Lake, covered in water lilies and busy with birds, we found a perfect picnic spot. Relaxing on a campsite by the sea, among olive groves and citrus trees, I settled into being in Greece. Once back on the road, we headed inland, dawdling and stopping as the fancy took us.

In Arta, we paused at the steeply arched Ottoman bridge, the stones worn from centuries of use. Reaching the Corinthian Gulf at Mesolongi, we sat in the sun with the sparkling water all around us. Legend has it that God sieved the soil as he distributed it around the world. When he reached Greece, he'd run out of soil and so tossed the remaining stones into the sea to create the mountainous landscape.

Our campsite in Delphi nestled high on one of these mountains and had glorious views over the olive groves and the Corinthian Gulf. Sitting on our terrace in the evening I felt privileged as we watched the sun disappear behind snow-capped peaks, listening to a goat herd's distant bells. I followed the meandering Sacred Way in the footsteps of those ancient Greeks, climbing the hillside via terraces supported by monumental walls to reach the Temple of Apollo, where the oracle would proclaim on all major decisions. Zeus established Delphi as the centre of the world and the site, set in a spectacular landscape, was a focus for the Greeks for centuries. First used around 4,000BC, the oracle was established by 800BC. Delphi would have been teeming with visitors then, and it still is. Nevertheless, it is enchanting.

Although none of the amazing statuary remains, this is an atmospheric and impressive site with craggy mountains behind and tree-clad slopes below. We sought out a quieter and sunny spot above the temple and watched blue rock thrushes using the columns as perches. We took the zigzag path up the steep hillside to the Livadi plateau. This timeless and well-made path meanders up the cliff – colourful with flowers and butterflies – and rewarded us with stunning views. At the top we followed a sheltered, fertile gorge to a low ridge. Here we sat in a grassy meadow with our picnic, looking across to the snowy massif of Mount Parnassus. 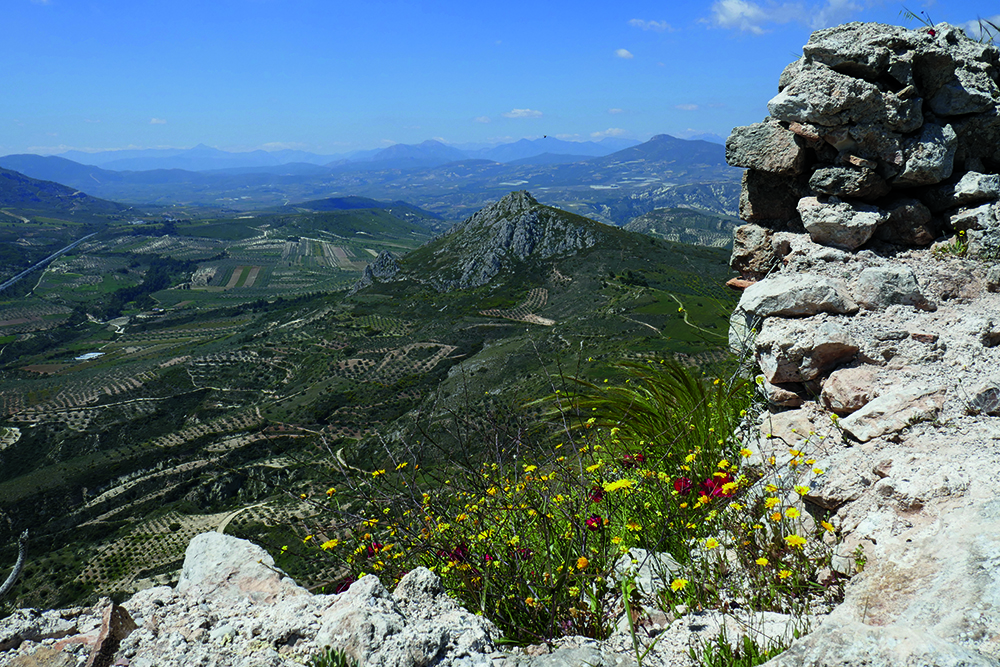 After a pause for the shops in the chic ski resort of Arachova, we took a winding road to Hosios Loukas, a walled monastery with Greece’s oldest Byzantine church from the tenth century. Inside are polished marble floors, striking mosaics and wall paintings, still vibrant after a thousand years. Nearby, the Distomo memorial remembers the 214 men, women and children massacred in a Nazi retaliation for a partisan attack in 1944.

Bypassing Athens, we reached Corinth, a narrow isthmus of fertile land connecting the Peloponnese with northern Greece. We combined walking and history, climbing the steep hill behind the site of Ancient Corinth. This is the lofty perch of the Acrocorinth, a fortress on an immense scale, first constructed by the Greeks in the fourth century BC. As we explored the winding paths, releasing the sweet camomile perfume as we crushed the flowers underfoot, hundreds of house martins swooped acrobatically around our heads. Then we stood above precipitous drops, enjoying glorious views across the isthmus. 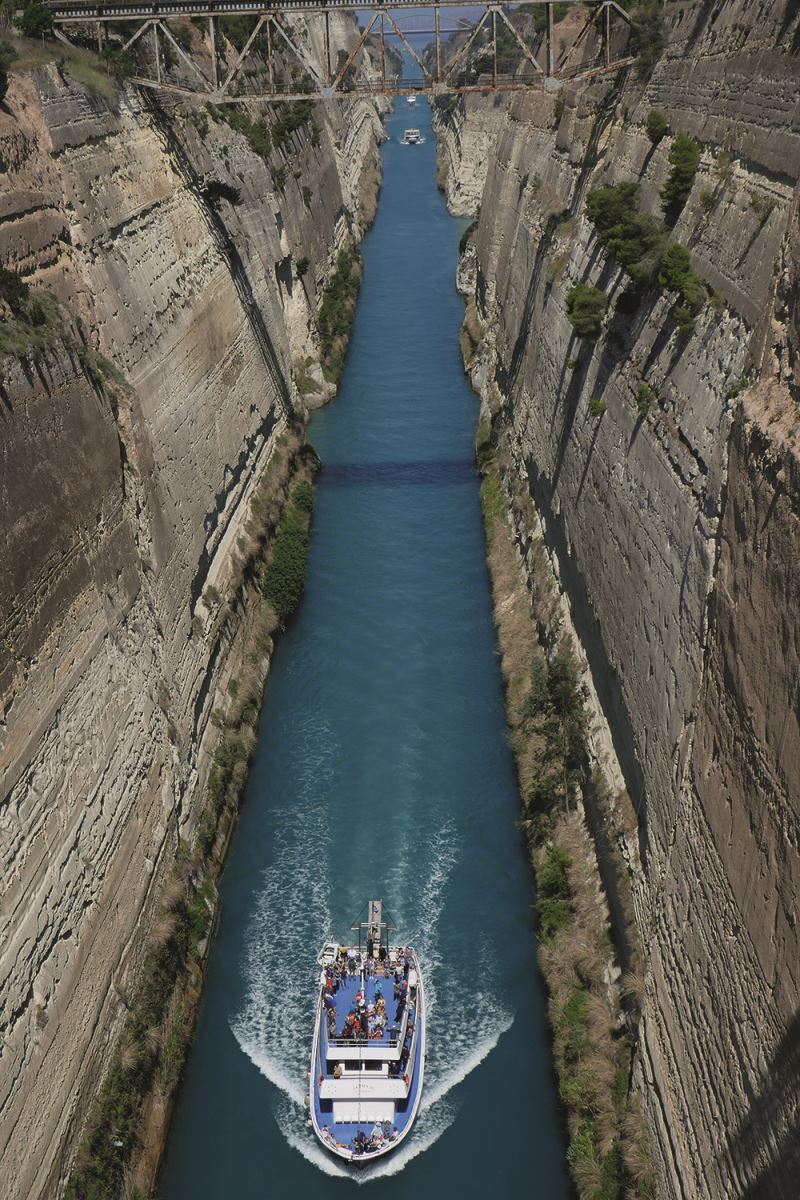 There are more precipitous drops at the other must-see Corinth attraction, the canal. Opened in 1893, this impressive piece of engineering is about 6.3km long (4 miles) and, from the pedestrian walkway, the 79m (260ft) drop is dizzying. We waved at tiny (from our viewpoint) passengers on the boats and left quickly before three young men started their terrifying bungee jump. After seeing how the Mycenaeans buried their dead in the monumental tholos (domed) tombs, we skipped the Epidaurus Theatre to camp on the nearby coast.

For a few days we did nothing more challenging than cycling among orange groves and around the pretty fishing harbour. Heading north, we stopped at some of Greece’s oldest olive trees around Amfissa, spotting a shepherd sitting in the shade watching his flock of sheep. It was a lovely drive to Thermopylae among the tree-covered mountains and the views encouraged us to pause for a brew with sweet Greek cakes from one of the many well-stocked bakeries. In Bralos, we stopped at a well-tended British WWI cemetery and met our first wild tortoise; we were so excited! The Hermann’s tortoise has beautiful markings and is fairly common in Greece.

We reached the Pelion Peninsula, a mountainous finger of land fringed by beaches and the Aegean Sea. The hills are covered in olive groves on the lower slopes and sweet chestnut, oak and pine above. There are gurgling springs, fast-flowing aqueducts and a network of cobbled donkey tracks that reach quaint, terraced, hillside villages. Each village has a café in the main square shaded by an ancient plane tree. There is a Greek proverb: ‘A society grows great when old men plant trees whose shade they know they shall never sit in’. I pondered this as I sat under a huge plane tree at the café in the idyllic village of Pinakates.

On another day we walked up to the village of Milies. This is the busiest of the villages as it is the terminal for the popular narrow gauge railway (fully booked over the holiday weekend we were there). We expected more of the same, but these gentle hills hide new landscapes and experiences. Beyond the olive groves, we found a sunny bank covered in orchids, including long-lipped tongue orchids. In the more upmarket village of Vizitsa, two musicians entertained us with Greek tunes. The Pelion proved to be an idyllic part of our holiday.

We were settling into the relaxed lifestyle, getting to grips with the strange letters and developing a taste for the pies and the cheap red wine. So, when what we call ‘the incident’ came from nowhere, it hit us hard. In a moment our beloved campervan rolled down a slope, hit a wall and we were homeless. Within 24 hours of ‘the incident’ our ’van was making its own way home and we were back on the road in a hired car. We were reluctant to leave Greece and decided to spend a few more days visiting the monasteries of Meteora.

We drove across the flat agricultural plain around Larissa to Trikala, stopping to see the Koursoum Tzami, a sixteenth century mosque and the old Ottoman streets around the fortress. Metéora means ‘suspended in the air’, referring to the immense sandstone pillars, six of which are topped with a monastery. The sandstone, formed from stream deposits and pushed upwards to create a high plateau, weathered along vertical fault lines creating massive pinnacles. From Kastraki village, we walked up to the Adrachti, a tall rocky column sitting on a col surrounded by an arc of monumental sandstone. Taking in the panorama it was clear that, even without the monasteries, Meteora would be spectacular. 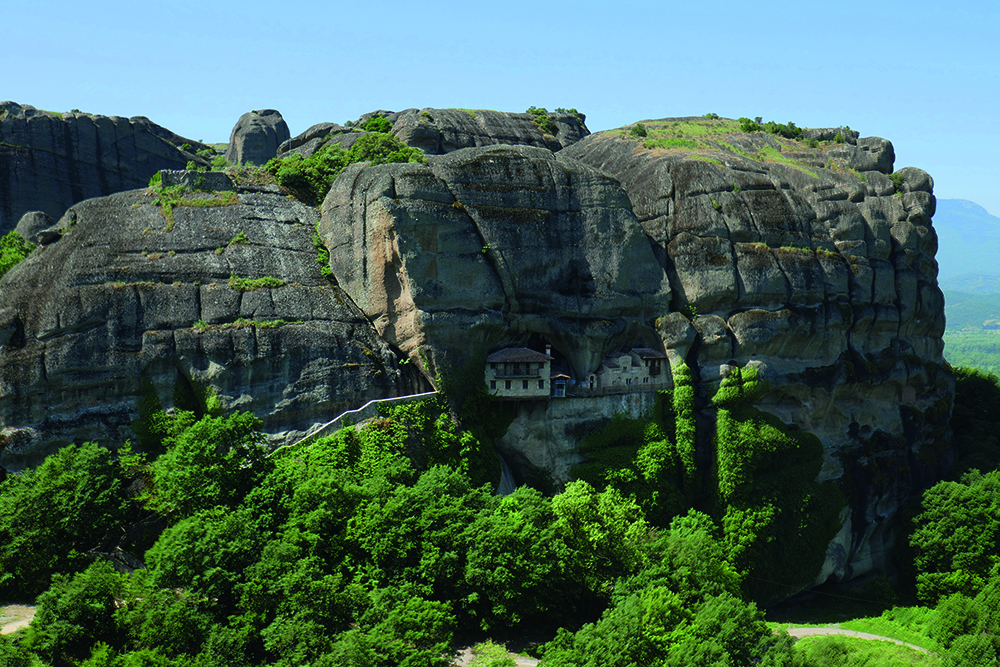 Using the free tourist office map, we planned walking routes along the winding paths through the wooded hillsides around Meteora and our efforts were rewarded with fabulous views away from the tourist bustle. Built from the fourteenth century, the monasteries were originally inaccessible except by ropes; steps were only constructed in the 1920s. I was pleased that we visited Agia Trias first as accessing this monastery involves a steep climb, which deters coach tours. On its airy perch, this tranquil monastery has unrivalled views over the wide bed of the River Peneiós and the snow-capped mountains beyond. The dark monastic church was dimly lit, heavily adorned with brilliant frescos and heady with incense.

We skirted around the margins of Meteora to Ypapanti Monastery, destroyed in 1809 after Papathymios Vlahavas, a monk fighting for Greek independence, was executed. We climbed up to Vlahavas’ statue on a broad pinnacle, with views of the abandoned monastery sheltered under a rocky overhang. With green fields and rounded hills to one side and weirdly shaped sandstone pillars to the other, we watched two short-toed eagles soaring overhead. We walked through trees and shrubs to more great viewpoints, almost tripping over tortoises on the way and emerging above Megalo Meteoro, the largest monastery.

Our last night in Greece was in the upmarket resort of Glyfada, south of Athens, and we struggled to adjust to its hustle and bustle. We had to leave Greece too soon but, despite ‘the incident’, Greece had exceeded my expectations and generously lavished us with so many outstanding memories. As we flew over the blue sea, I knew that leaving would only be temporary.

This feature was originally published in the February 2018 issue of MMM magazine. Subscribe to MMM magazine today for your monthly does of motorhome travel inspiration.