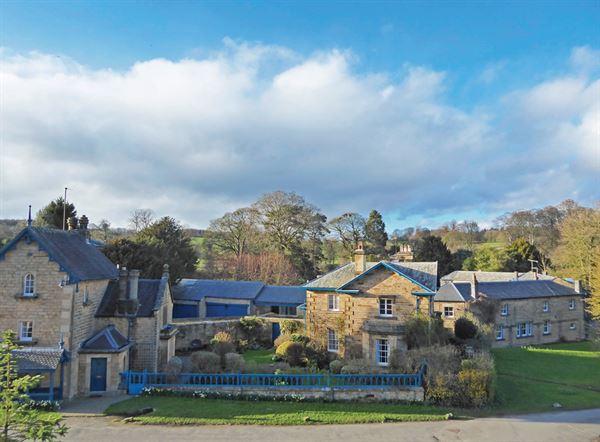 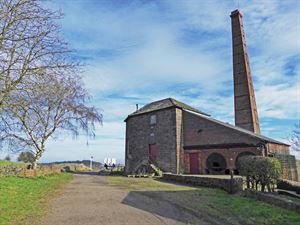 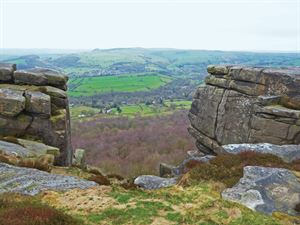 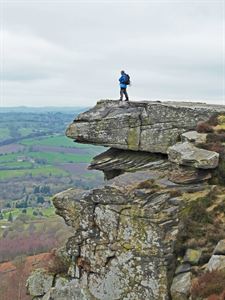 This is a beautiful and versatile area to satisfy the interests of all visitors. Motorhomers can explore the Peaks, walk the trails and wander picturesque villages – Derbyshire dishes up a great short break.

If you're planning a visit, read on to discover our recommended itinerary, which allows you to see the very best of the Peak District over a few days. 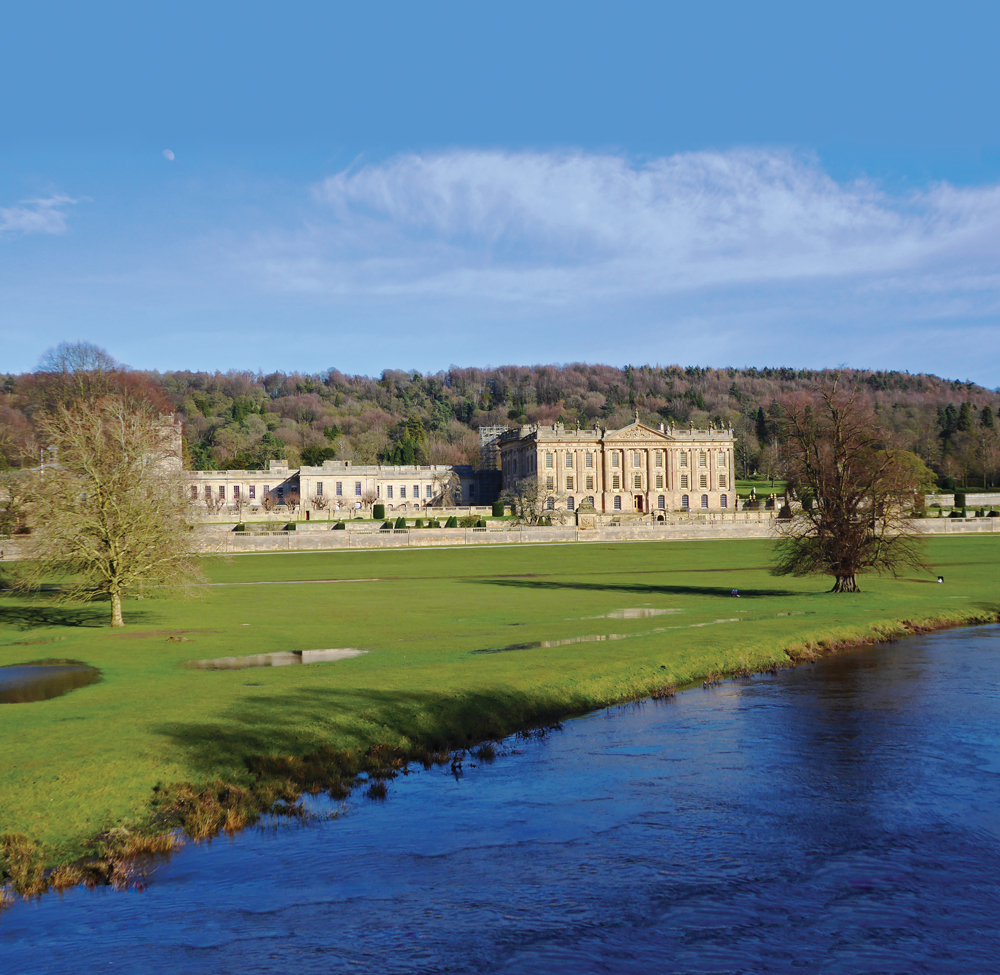 It was like The Secret Garden in reverse. The Caravan and Motorhome Club’s Chatsworth site is in a walled garden and, in the wall, is a locked door to which we’d been given a key. Stepping through the doorway, we’d escaped from the site and into the bright grandeur of the Chatsworth Estate. We followed the peacock-blue Derwent to the great house while, across the river, young play-rutting deer clashed antlers.

The house was closed during our visit, but its Carriage House Café in a stable block was serving sticky wedges of cake, calories for our steep climb up to the hunting tower overlooking the estate. This tower was built in 1582 for Bess of Hardwick, the second-richest woman in England after Queen Elizabeth I and from whom Chatsworth’s Duke of Devonshire is descended.

Back in the valley, Chatsworth House glittered with gold leaf in the sunlight. The fourth Duke of Devonshire complained that the close-by estate village of Edensor ruined his view, so he had the houses demolished and rebuilt over the hill and out of sight!

Every house in the lovely walled village of Edensor displays a different architectural style, though the paintwork is a uniform ‘Chatsworth blue’. Edensor is dominated by St Peter’s Church, where JF Kennedy’s sister, Kathleen, is buried in the churchyard (having married into the Devonshire family). Opposite the church, the steamy windows of the Edensor Tea Cottage drew us in for more cake.

We walked through the estate to Baslow and up a steep track on to Baslow Edge – one of the many ‘Edges’ in the Peak District that mark a geological transition between White Peak and Dark Peak. Travelling from one to the other is like entering another world. The velvety hills and heady limestone gorges of the White Peak end abruptly at the Edges in moody millstone-grit cliffs, beyond which is a desolate upland plateau of heather and cotton-grass bog.

On the bristly heather moorland above Baslow, there is a massive gritstone monolith: the Eagle Stone. According to old custom, men of Baslow had to prove their fitness for marriage by scaling this awkward stone unaided. As we passed by, a young man was being given a leg-up by his impatient girlfriend.

The northern horizon is dominated by the steely crescent of Curbar and Froggatt Edges – colossal cliffs topped by towers of eroded gritstone slabs. Our path dropped down to a winding road before climbing a sharp bank onto Curbar Edge. A track of coarse sand safely skirts the precipice, but to take this would be to miss the exhilaration of leaping across the grippy boulders and teetering on rock overhangs. Gritstone is loved by climbers and several were scaling the rock-face along the length of the Edge.

We teetered on to Froggatt Edge, enjoying the uninterrupted vista over the Derwent Valley and hearing the calls of red grouse. They rose from the moor on a whirr of wings, garbling ‘Go back! Go back!’

We did go back, descending through birch woodland to Froggatt, from where we followed a riverside path along the Derwent across wetlands and past an old mill to Calver. Here, we discovered another tearoom. This had been a truly excellent day for sampling home-made cake!

Day 2: On the Monsal Trail 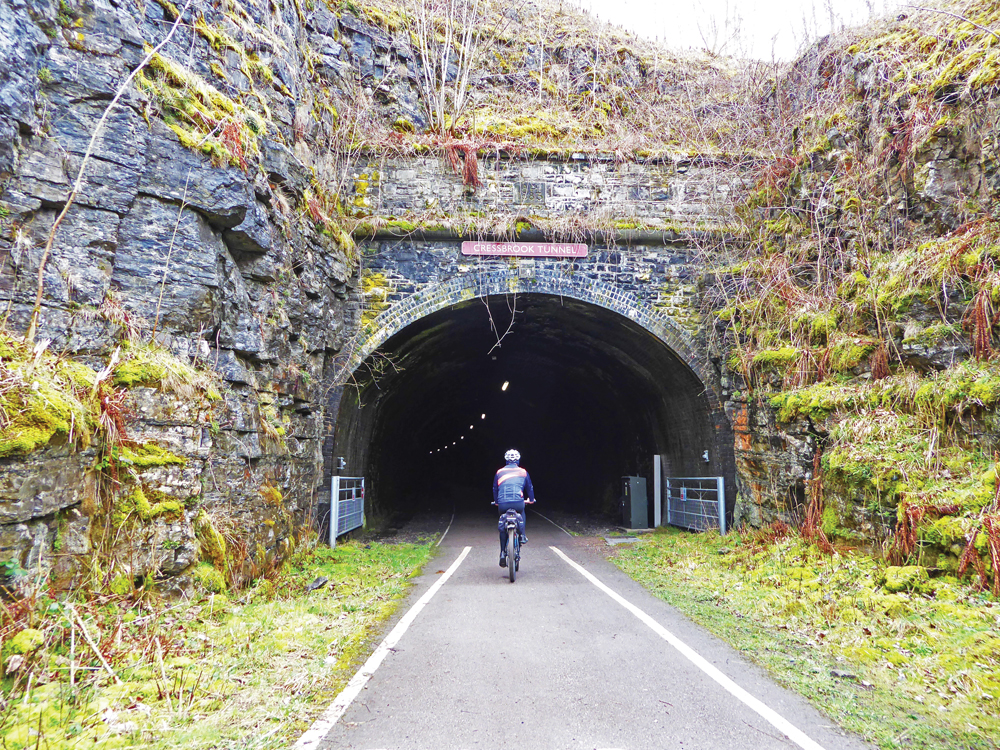 The Peak District – described as the lungs of the industrial north – has not been unscarred by industry. The nineteenth century brought railways through the hills, carrying coal, limestone and tourists. After the Beeching cuts, several lines were acquired by the Peak District Authority to serve as recreational trails for walkers, horse-riders and cyclists.

The Monsal Trail (the former Midland Railway) begins at Bakewell. We were happy to join this level track after a vicious climb out of Pilsley across Chatsworth territory. The trail runs for 8½ miles towards Buxton and, after a couple of miles, we reached the old station at Hassop, which is now a café, gift shop and cycle hire centre.

The next station along the line is Great Longstone (now in private ownership). Alongside this is Thornbridge Hall, a listed Jacobean mansion with gardens open to the public. The trail then becomes more dramatic, passing through Headstone Tunnel (the first of six), dimly lit and dripping for its 533-yard length.

On the other side, we crossed the enchanting Monsal Dale on the Headstone Viaduct, the building of which caused controversy in 1863. John Ruskin, the Victorian writer, artist, critic and social reformer, complained, “The valley is gone … and now, every fool in Buxton can be in Bakewell in half an hour.” Ironically, the viaduct now has a preservation order on it.

We weaved through Millers Dale, a deep limestone gorge carved by the River Wye and passed high above Cressbrook Mill – one of Sir Richard Arkwright’s mills where cotton was spun for lace – which ceased production in 1965.

After Litton Tunnel is Litton Mill, which once profited by the cruel labour of young orphans taken from overcrowded London workhouses. Many were worked to death and lie locally in unmarked graves.

Disused lime kilns and quarries line the route on the approach to the two tunnels through Chee Dale near the end of the trail. Nature is slowly softening the scars of history along this now tranquil track, so it was disappointing to end our quiet railway journey in traffic on the A6 to Buxton. Our legs were disappointed, too, by the steep hill out of town after a cake stop. But we endured the ups and enjoyed the downs as we traversed the beautiful green waves of White Peak from Buxton to Baslow. 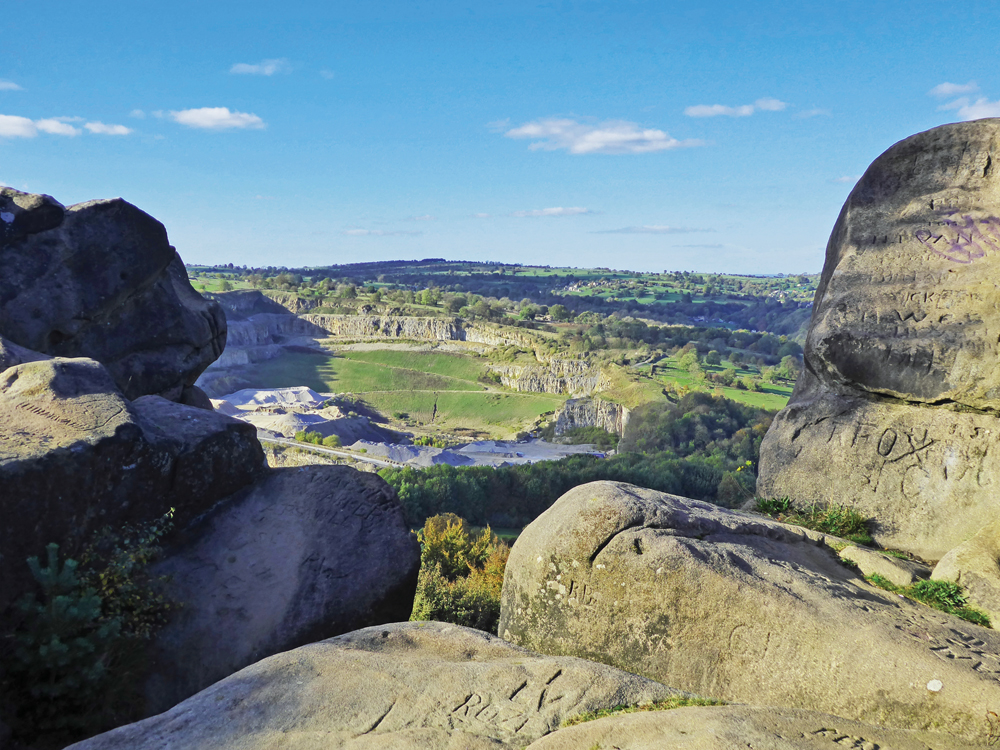 Trail-riding is addictive. The following day we parked at Parsley Hay Station (junction of the Tissington and High Peak Trails), with its refreshment kiosk and cycle hire centre. The 13-mile-long Tissington Trail was the first railway to be converted and is the track-bed of the Buxton to Ashbourne line.

Leaving the station, the trail threads through a deep cutting in the hillside before passing Hartington signal box, now a small visitor centre.

A high embankment carried us across a broad, grassy panorama, soaring past lyrical lark meadows freckled with sheep.

We travelled over bridges and through more cuttings to Tissington, where we left the railway and rode into the village past the Jacobean Tissington Hall, home of the FitzHerbert family since 1609. This pretty village has a pond and five wells; no one goes thirsty here. The tearoom beside Tissington Hall was where we slaked our own thirsts and sat eating cake in warm sunshine with the participants of a classic car rally. We then rode back to Parsley Hay and forked onto the High Peak Trail.

This 17-mile track meanders around magnificent valleys, alongside lime quarries and farmland, through short tunnels and past Harboro Rocks, a dolomitic limestone outcrop worth a visit for its cave that shows evidence of occupation since the Ice Age.

The railway was built in 1831 to carry goods between the Cromford and Peak Forest Canals and was operated by horses tugging the wagons on flat sections and winding engines pulling them up several steep inclines. We whistled through Hopton Tunnel and whizzed down the first of the inclines to Middleton Top, where there is an old wagon and an engine house (the oldest working one of its kind in the world).

A one-in-eight incline rushed us rattling from Middleton Top to Black Rocks, a weathered gritstone outcrop high above the Derwent Valley. Leaving our bikes, we climbed up the rocks for a superb view towards Cromford, home of the world’s first water-powered cotton spinning mill (now a UNESCO World Heritage Site).

The trail, with its expansive views, winds around the base of the rocks to Sheep Pasture, where there is another engine house above a giddy incline down to High Peak Junction and journey’s end. At High Peak Junction there are some interesting railway workshops and another café offering delicious cake. 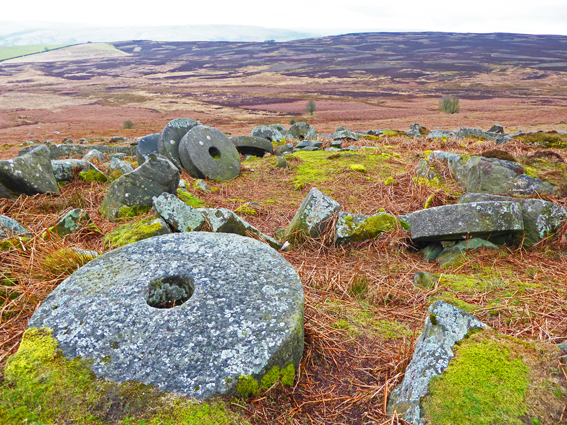 It was a grizzly day when we chose to visit one of the Peak District’s iconic landmarks – Stanage Edge – the largest gritstone edge at 3½ miles long. We parked on Millstone Edge above Hathersage and walked two miles across Hathersage Moor towards the sombre grey Stanage cliffs.

A short scramble took us to the top of the Edge, where we were again between two worlds. Gusts of raw mizzle pestered us. Though misty, the vista across the Hope Valley to Mam Tor, known as ‘the shivering mountain’, was majestic. Below us we could see North Lees Hall, Charlotte Brontë’s inspiration for Thornfield Hall in Jane Eyre and a location for the 2005 film Pride & Prejudice. The same film spotlighted a windswept Keira Knightley playing Elizabeth Bennet, standing in contemplation aloft Stanage Edge.

For centuries Dark Peak was quarried for its coarse stone, used in the corn and textile mills. On Moscar Moor, below the Edge, scores of abandoned millstones now lie where they were cut and shaped. Gritstone turned flour grey and, when white bread became fashionable in the mid-eighteenth century, imported quartz millstones from France caused the industry to collapse.

Never mind the bread, though, bring your own cake; there are no tearooms here!

Useful information on the Peak District 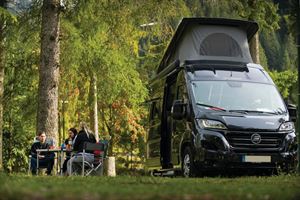 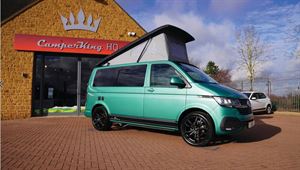 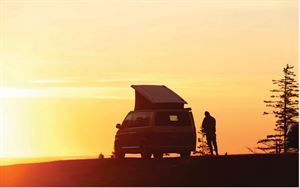 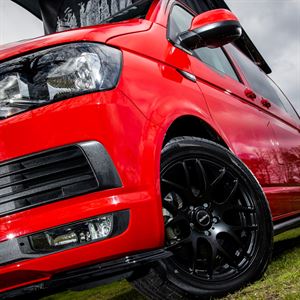 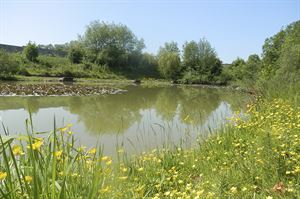 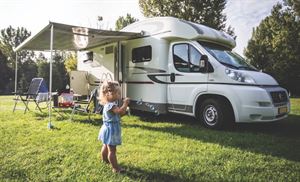 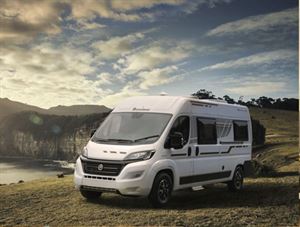 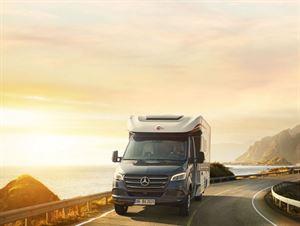 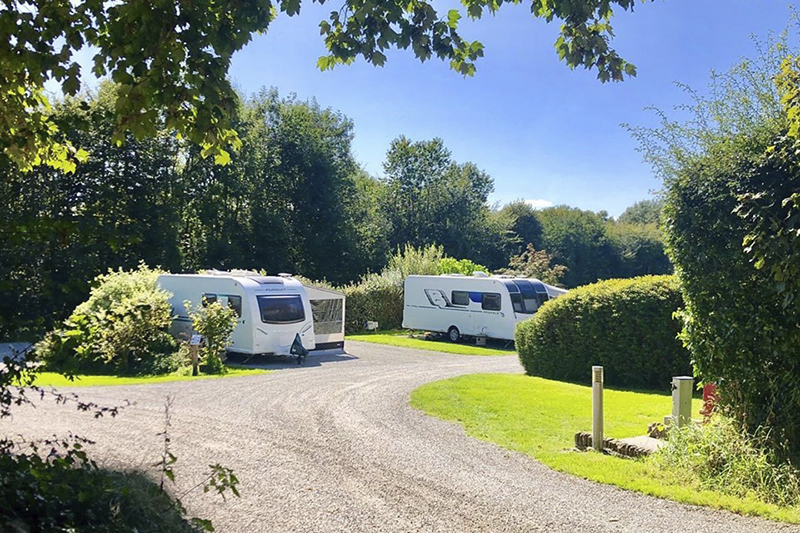