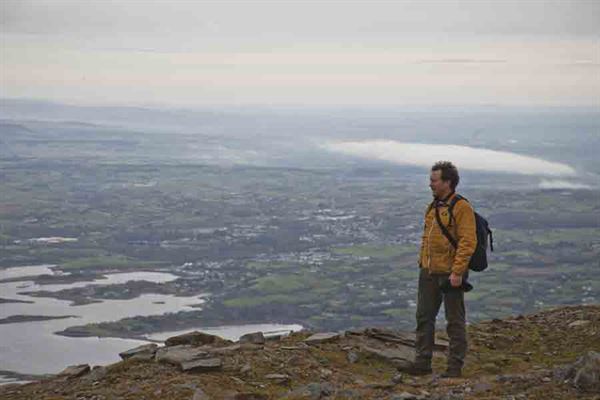 Words and photos by Martin Dorey

We’ve been lucky so far. As we leave Galway on Ireland’s Wild Atlantic Way heading west, the weather is stunning. The water in Galway Harbour is smooth like glass, reflecting the last rays of the last of the October sun.

At Salthill, the city’s suburb on the sea, we watch open water swimmers take to the sea in nothing but their swim togs under a deep blue sky. They come out smiling, despite it being the last day of October. It was that kind of a day.

So we don’t mind that it’s now 4pm and getting dark because the weather has changed today. We have been driving all day, exploring the nooks and crannies of Connemara. We’ve been to remote beaches, chatted with a master bodhrán maker and taken pictures of wild, boggy landscapes. The wind might have ruffled our hair and the rain soaked our legs on truncated beach walks, but we are happy to be parked up in the huge car park of Keogh’s Pub and General Store that also happens to be a Brit Stop. 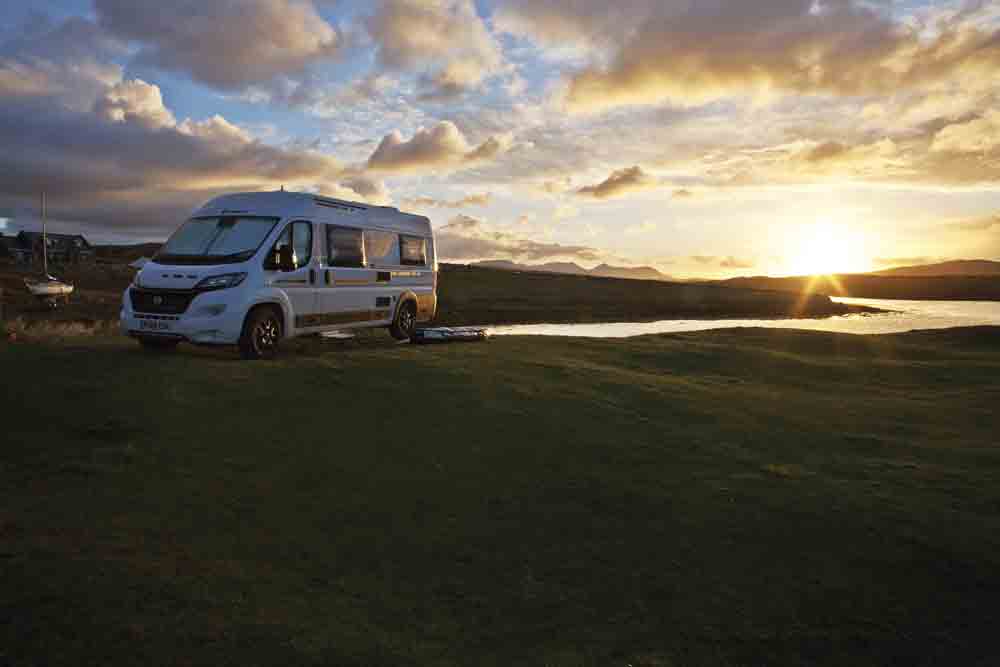 We’re in a Benivan 122, a 2018 model that’s exclusive to Marquis Leisure, and we’re very happy about it. On winter evenings like these, when the wind is whistling and the toilet is a long way away, it would be a struggle to live comfortably in a smaller van. The Benivan is UK-built and builds on the popularity of larger van conversions. It will seat four and sleep two in a rear lounge, and has all the bits and pieces we need for an off-grid winter trip: Truma heating, LPG tank for heating and cooking, three-way fridge, shower and toilet. We can do two or three days wild before we need to recharge.

After cooking we wander over to the pub, say hello to the owners and order a couple of pints of Guinness. We settle in for a cosy evening. We feel very lucky when the landlord comes over with a plate of fresh crab claws for us, just because. Did we look hungry? No, they just thought we’d like them. We scoff them, order some more pints and, eventually, stagger out and into the night.

Camping in Ireland isn’t for everyone. The weather can be very unpredictable, making tented camping especially difficult, apart from in the summer months. Unsurprisingly, there aren’t too many campsites, Brit Stops are few and far between and lots of beach car parks have height barriers, making wild camping frustrating at times.

It takes a certain type to be happy to take the breaks in the weather and go with the flow. If you expect wall-to-wall sunshine then you’re a few too many degrees to the north. If you like pubs, you’re in for a great trip!

In a bigger van or motorhome, Ireland can be a paradise. It has amazing deserted beaches, ancient sites, great pubs and lots of opportunities for walking, cycling, kayaking and surfing. The general attitude to camping wild is OK, and even though you might feel unwelcome in some places due to the ‘no camping’ signage, I have never had any trouble.

Pubs are happy to have your business and people are curious and friendly. Years ago, I was camping wild on a beach in the west of Ireland in my VW T2 and was greeted by a local who wanted to know what I was up to. To break the ice, he brought a six pack of Guinness and a bag of turf for the fire. I felt very welcome after that!

The morning after, we head off for a pre-booked appointment at a local hotel for a seaweed bath. As campers tend to do, we turn up with clean undies and our toothbrushes, eager to make the most of the washing facilities!

We come out feeling fantastic, of course. Seaweed baths are an Irish speciality that have become ever-more popular on the west coast. The idea for bathing in seaweed, it is said, came from farmers who handled seaweed as fertiliser and noticed callouses and cuts on their skin healed more quickly. Adding hot water to fuccus serratus (serrated wrack) brings out a beautifully silky mucous from the weed which softens the skin and makes it feel as if you’ve bathed in pure ozone. It’s not cheap, but sometimes, when the rain is lashing outside and you can’t face showering in a tiny cubicle, it’s absolutely worth it.

We press on, towards Clifden, a beautiful town on the southern edge of the Connemara National Park. On the outskirts of town, just off the N59, we take a left-hand turn, following the Wild Atlantic Way signage, and find ourselves on the Sky Road Loop, a spectacular circular route along a narrow peninsula giving views of the Connemara coastline. We take the high route, which follows the spine of the peninsula, passing Clifden Castle on our way, and weave down to the harbour. All in all, it’s spectacular.

We land firmly on our feet at Clifden Eco Beach Camping site. Situated on the machair (coastal grassland) just outside of Clifden, it’s got a green heart, simple earth-conscious facilities, a fantastic inlet for fishing and an incredibly beautiful beach for frolicking. It’s also open all year so it’s perfect for a stop to recharge and empty the tanks, batteries and recycling.

Climbing the holy peaks of Ireland

We head north – along some beautiful roads – and use a break in the weather to climb Croagh Patrick, Ireland’s holy mountain. We rise early after a night on the quayside in the beautiful town of Westport and are the first to the summit, which at 750 metres isn’t the tallest, but still offers us spectacular views of the 365 islands of Clew Bay. 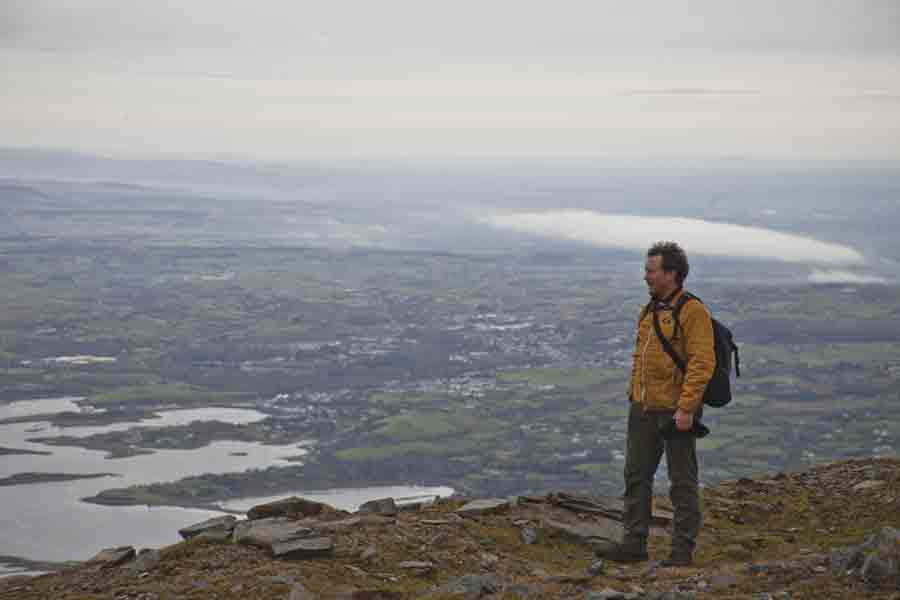 At the top it’s cold and there is a little leftover ice on the path as we shelter from the wind to eat our breakfast. The thrill is about reaching the top of the sacred mountain. If we were more devout we’d have done it barefoot like many of the one million Catholic pilgrims who come here in the summer. As we descend, I love my boots more than ever, and love them even more when I take them off in the visitor centre to warm them by the fire, as I sip my tea and scoff a slice of Bakewell tart.

The weather worsens, with a storm due, so we head further north, to a tiny village called Mullaghmore in Sligo that has become world famous for its mountainous waves. Surfers from all over the world make pilgrimage here to surf waves of over 30 feet. Along the way we get some waves for ourselves at some of the famous surfing beaches in Sligo.

Despite them feeling big to me they are nothing compared with the waves that show up the day after. As we wake in Mullaghmore and look out on the quayside it seems as if the surfing world has arrived on our doorstep. 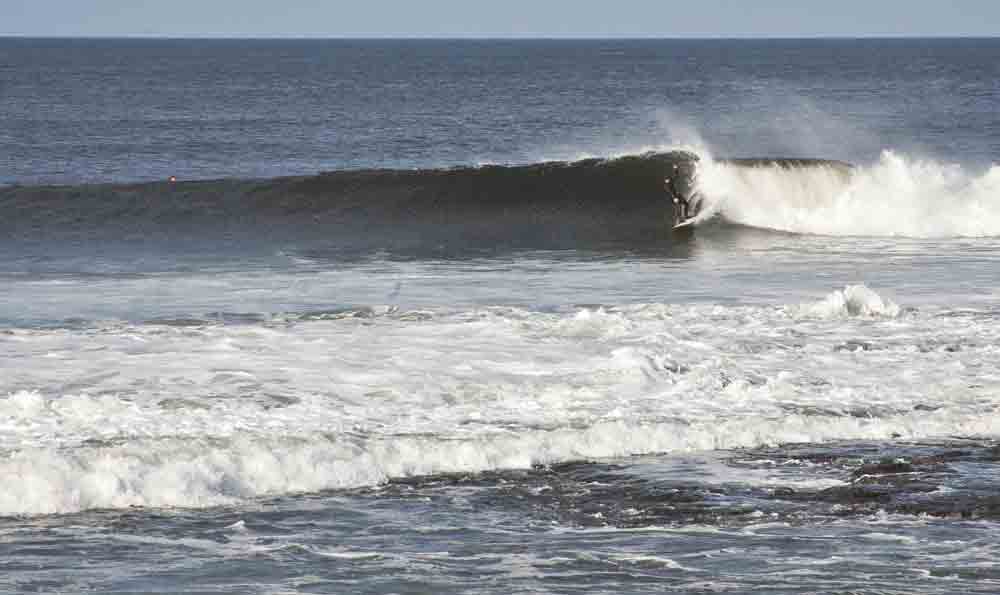 Jet skis launch from the harbour and head out to the ultra-exposed Mullaghmore Head, the site of a series of shallow reefs. We wander along the coast road to the arena and watch, open mouthed, as about 20 of the world’s best surfers tackle waves of at least 20 feet. Some, we think, are a lot bigger.

As they break, they boom, setting off a series of shutter clicks as the assembled surfing press snaps away at the spectacle just offshore. Surprisingly, the sun shines on the surfers as they dance on the water, climbing Ireland’s truly awesome peaks. In the background Benbulben, a mountain I have yet to climb, reminds me that there are many highs to conquer, even if surfing Mullaghmore will never be one of them.

This article was orginally published in the February 2019 edition of Campervan magazine - read the full version by buying a digital issue copy here. This trip took place prior to the coronavirus pandemic. We are publishing it for your enjoyment and to help you plan your future trips. Read the latest camping travel advice here.