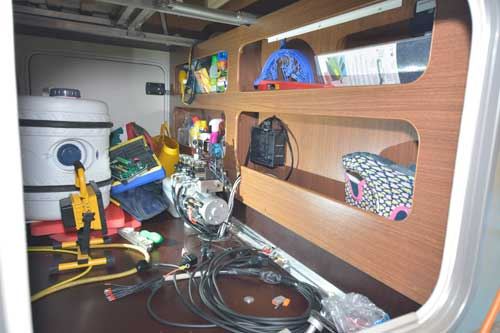 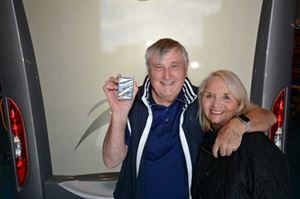 Levelling systems that, with a few tweaks of a knob, can provide you with a level motorhome on almost any pitch in a few seconds seem to be an ideal solution. No more fiddling around with levelling wedges on a campsite in the rain.

They can seem fiendishly expensive, at least initially. But do the benefits appear more than worthwhile in the long run?

Tony Dowling, a retired comedian who notched up 35 years of doing the club circuits (rubbing shoulders with the likes of Louis Armstrong and Frank Sinatra), certainly thinks so. After seven years of motorhoming, he and his wife, Linda, are now onto their second ’van, a 2011 Bürstner Ixeo Plus it 724, in which they have already toured around much of Britain.

But now aged in his early 80s, Tony is finding manoeuvring the ’van on site more of a struggle. So, after some research, he’s had a system made by Hampshire-based Glide-Rite installed in the ’van.

Glide-Rite, which also makes air suspensions systems for the ambulance market, initially went into the levelling market by becoming a distributor for Goldschmitt. But, since Goldschmitt took everything in-house in 2008, the company has developed a system of its own – the only one, according to Glide-Rite’s Managing Director, Carl Leake, which is manufactured entirely in the UK.

Installing the initial system, which takes between two and three working days, involves fitting four adjustable legs under the chassis with a central control panel located somewhere near the rear axle (in the Tony’s case it’s in their garage) that controls them. In the semi-automatic version, which the Dowlings initially had fitted, the whole system is controlled by a corded remote control system, but you still have to use your own spirit level. Carl says that by offering this basic option it has made the system more affordable for many customers at £3,450.

The fully automatic version, which the Dowlings upgraded to earlier this year over the course of one day, involves a cordless fob and no spirit levels, but costs £4,250 from scratch.

Both systems allow you to move each leg individually so that you can level from side to side as well as back to front. Special telescopic and ➤ swing legs are also available, although these may cost extra according to the size of the vehicle.

That is just the thing – the Glide-Rite system is largely bespoke and, although underslung items like gas or water tanks can cause the installation to take longer, Carl says that even now, when the company is working with over 100 motorhomes every year, it has never turned a vehicle away. “The smallest vehicle was a Romahome on a Citroën Berlingo, while the largest was a 32-tonne outside broadcast vehicle,” he says.

But you can’t fit the system yourself. Even the wiring loom required would be beyond most amateur sparkies. Carl says he used to offer it as a supply-only option to customers with specialist workshops, but even that has stopped. Although the company can visit the customer’s home, it prefers to have customers take their vehicles either to Liphook or to one of four dealers spread across the UK.

The system is supplied with a three-year warranty, although if customers agree to return to Glide-Rite to have it serviced every year for £150, that warranty will be extended to 10 years. The system isn’t old enough for anyone to discover how it performs beyond that period. And the company is quite happy to transfer the system from one ’van to another.

Tony thinks it is “brilliant”, and can now look forward to less stressful motorhoming. He is particularly keen now on revisiting some of the (unlevel) Welsh hill towns he only glimpsed at in his past life on his way to a gig. “I want to revisit places which I could barely pronounce, let alone find on a map,” he says.