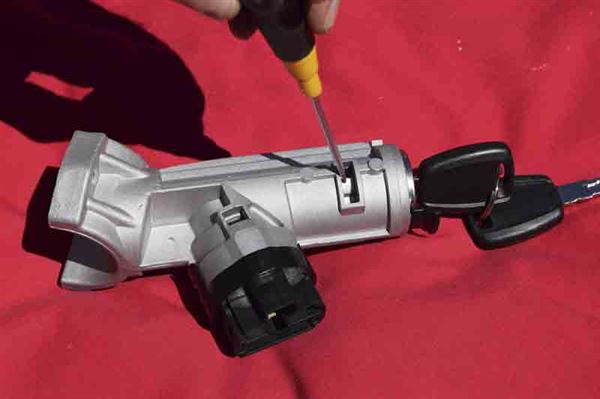 Words and pictures by George Vince

Most motorhomes have some form of steering lock system, usually a mechanical spring-loaded bolt that engages in a machined groove in the steering shaft (released when the key is inserted and turned) and an inductive coil that interrogates the microchip in the key fob for a compatible code to deactivate the engine immobiliser.

In the main these operate trouble-free. However, when they do go wrong, sorting the problem out requires some knowledge.

In my case, when starting the vehicle the engine would start but, upon releasing the key, it would rotate back to the ‘OFF’ position and stop the engine. The normal running position detent had failed.

As the steering lock assembly is not repairable I had to replace it with a new one. The following procedure should also hold good for makes of van other than Fiat.

As mentioned, the key fob has a microchip in it, which deactivates the engine immobiliser so changing the key should be avoided. In my case, because there was nothing wrong with the barrel assembly, I swapped it across to the new steering lock assembly.

The steering lock assembly on my Fiat is a common part also used on Peugeot and Citroën Sevel vans and is readily available. I purchased mine on eBay for £25 complete with two new keys (which, as mentioned, I did not use). Take care to get the right part as there are variations according to the year of the vehicle. I also bought Torx anti-tamper bolts (M8 x 20 stainless-steel with a special key) on eBay.

Only conventional tools are required apart from a ¼in socket drive for the Torx special key and a chisel/drift for undoing the two shear bolts. I made a small chisel from a 6-inch nail, which worked very well. However, the nail is made from mild steel and, as such, is quite soft and would not ‘bite’ into the edge of the shear bolt left untreated. To overcome this, having shaped the tip of the nail into a chisel using a grindstone (a file will do equally well) I then heated it until cherry red in the flame of a gas blowtorch. While cherry red I immersed it into cold water which hardened it whereupon it bit into the side of the bolt quite readily.

There is a temptation to use conventional M8 bolts when fitting the new steering lock assembly to the steering column as, quite naturally, should a future repair become necessary an ordinary 13mm spanner can be used to remove it. If the vehicle is stolen and you’d compromised one of the in-built security measures, your insurer may not honour the policy, so my advice is use security bolts to avoid any potential problems in the future.

1. Remove the four crosshead retaining screws that secure the lower steering column shroud beneath the steering wheel and place the cover in a safe place 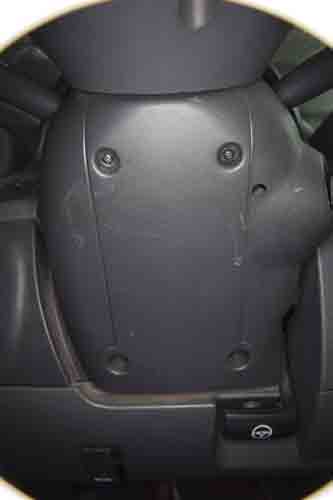 2. With the key turned to the 'ON' position, push the sprung barrel locking catch inwards 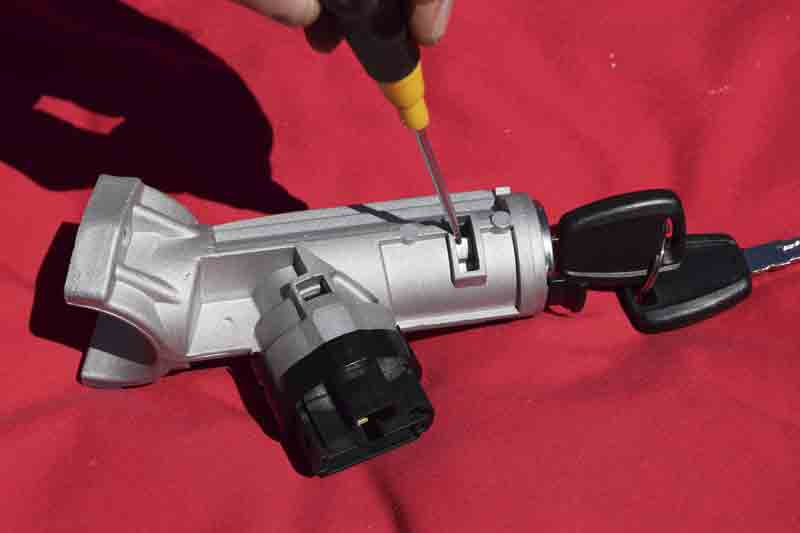 3. Pull the barrel away from the main lock assembly to free it. You'll need to fit this to your new assembly to keep the same key 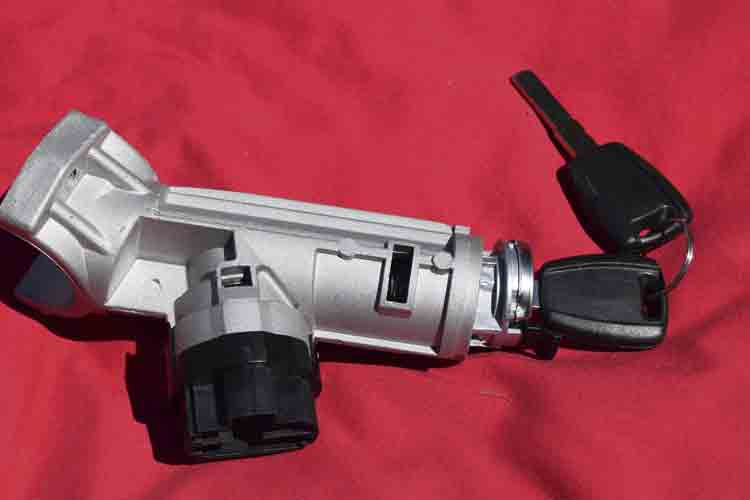 4. With the lock barrel removed you can see the tang that operates the mechanism inside the steering lock 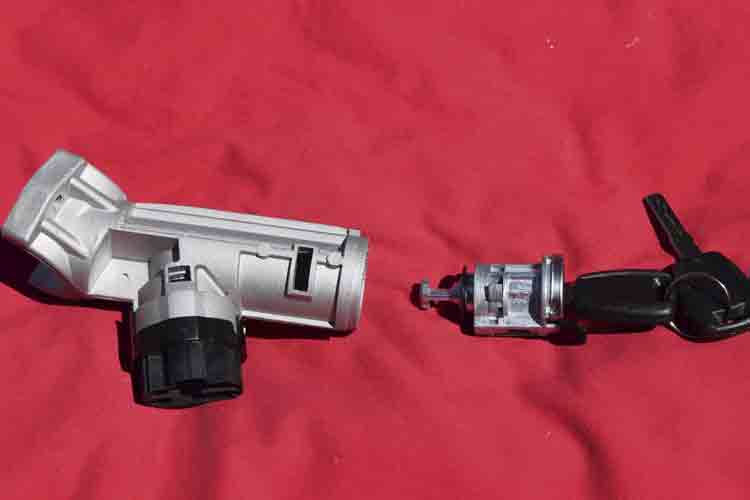 5. This coil located on the end of the barrel housing is what senses the key's code and allows the ignition to activate 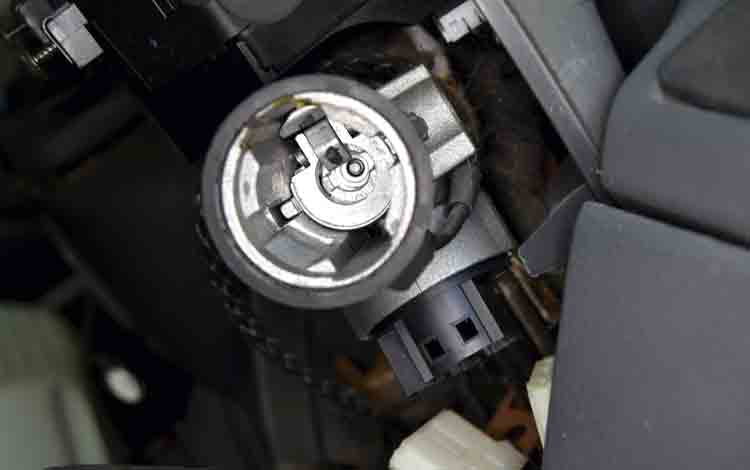 6. The immobiliser code-sensing coil needs to be unclipped from the lock housing. Note its position for when reassembling 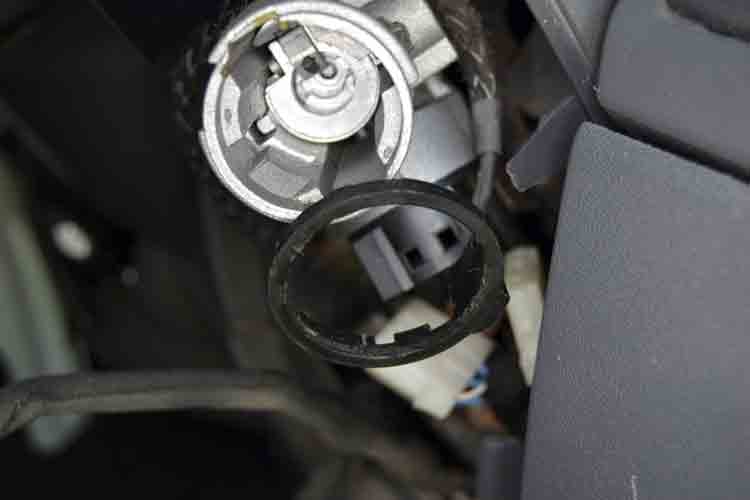 8. You'll need a drift/chisel to remove the shear bolts. I modified a 6-inch nail to use as a chisel and it worked fine.

These are the two shear bolts holding the steering column. Tap the edge of the shear bolt head with the chisel to undo the shear bolts. They should start moving a few hits, but it will take patience and precision 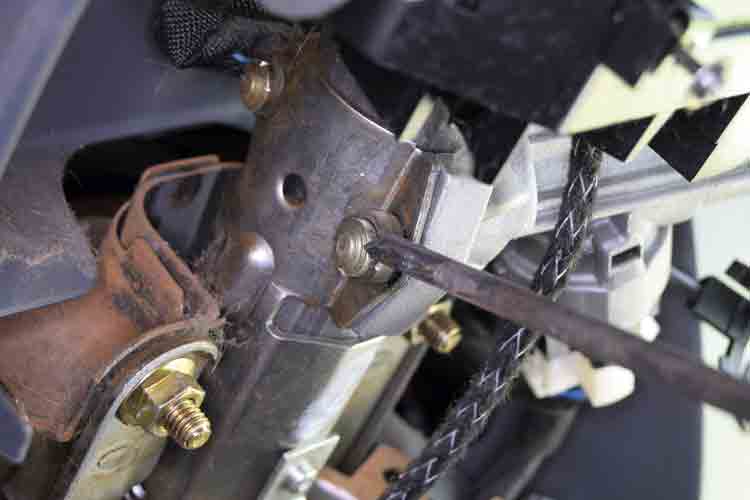 9. This is the old shear bolt after removal. Note marks left by the nail chisel 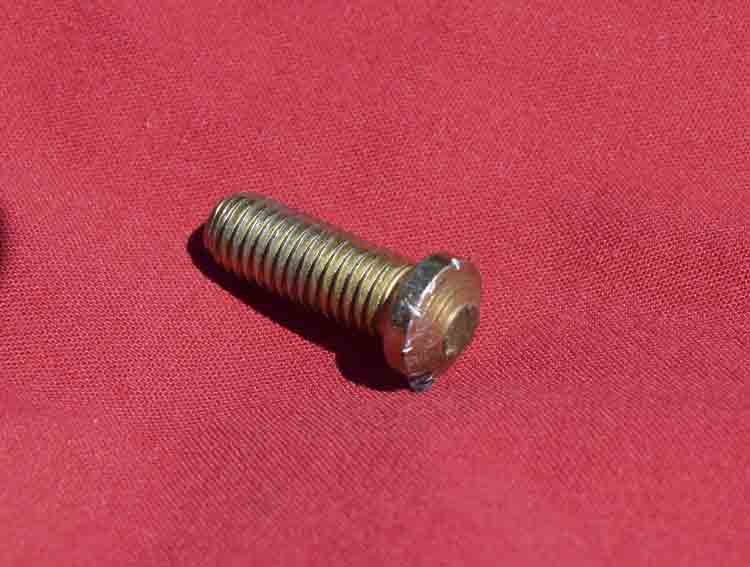 10. This rectangular block is the steering lock bolt on the lock mechanism... 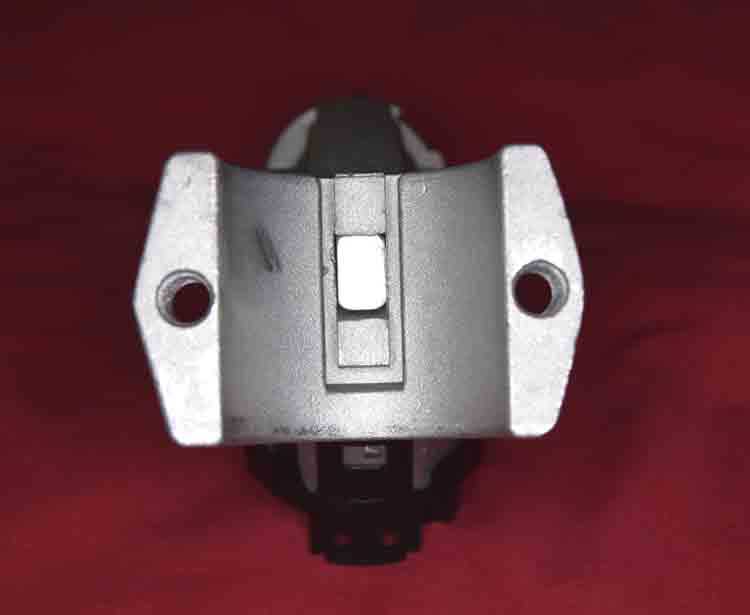 11. .... and it fits into this slot on the steering column to lock it in place 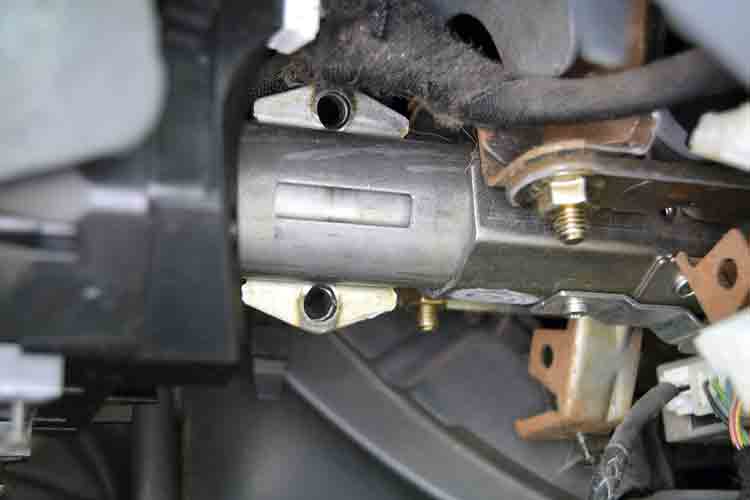 12. Original shear bolts were replaced with a pair of Torx anti-tamper M8 x 20mm bolts bought on eBay with a special key to fit them 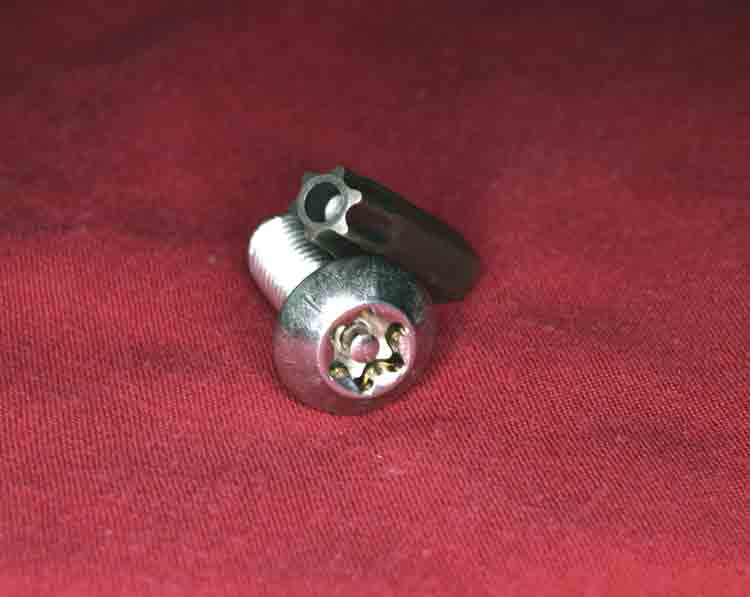 13. Fit a new assembly with the Torx anti-tamper bolts using a special key in a quarter-inch socket 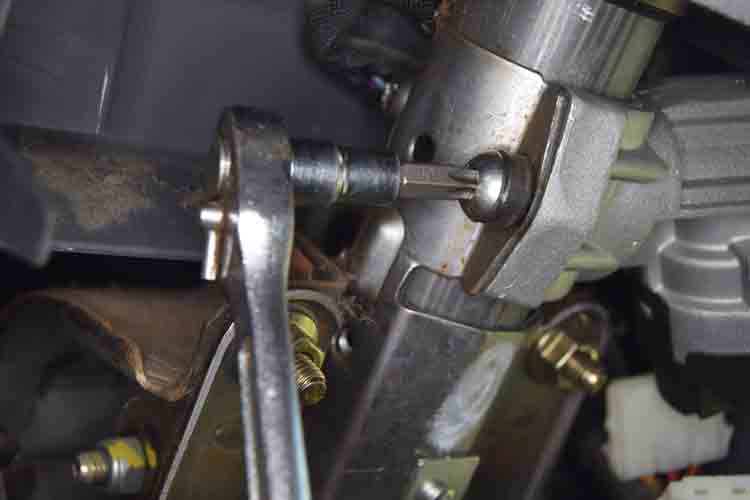 14. This is the alignment of the inner lock drive shaft that is needed prior to reinserting the lock barrel 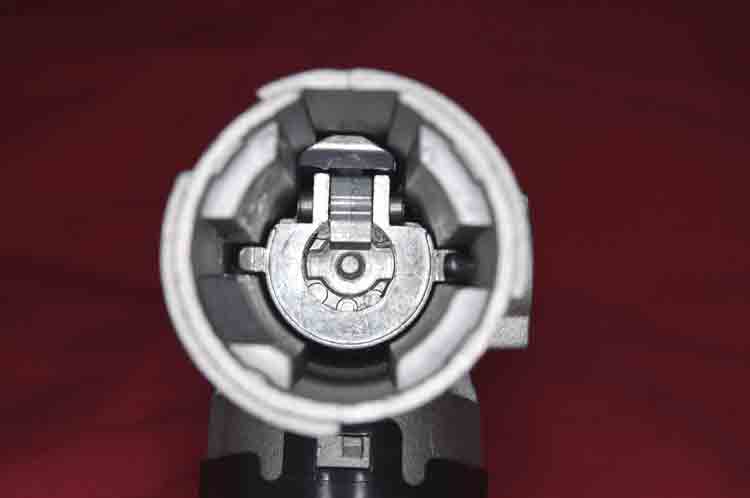 15. Align the barrel drive shaft of the original lock prior to insertion into its housing. It simply clicks into place 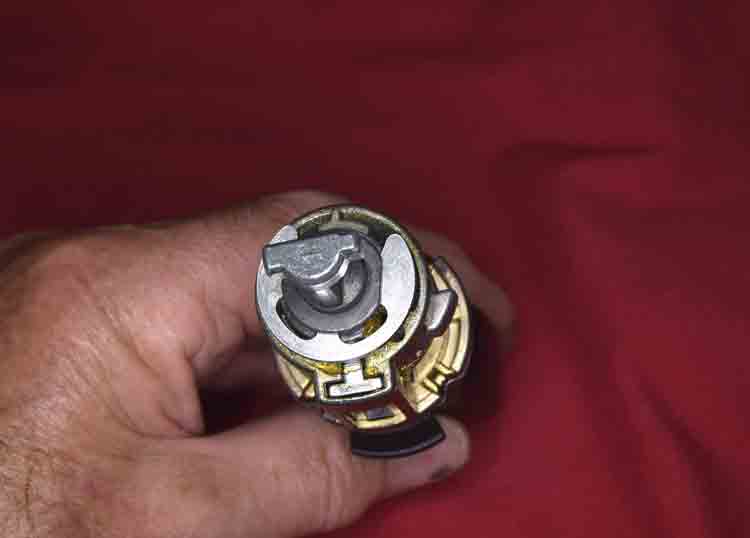 You'll need the following tools to change a steering lock assembly. Allow yourself approximately three hours to complete the job.