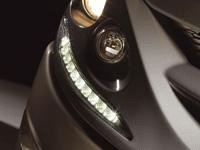 After attending all the 2012 motorhome launches, Rachel Stothert noticed a trend for future motorhomes, daylights...

I’ve been busy flying to and from various European launches in the last few months. However, now the dust has settled and my nightmares of economy flights are receding, I’ve had chance to take stock of what I’ve seen.

New more compact layouts seem to be increasingly popular and, luckily for us Brits, the Europeans seem to be coming round to the benefits of motorhomes with decent lounges.

But the other thing I noticed was the inclusion of daytime running lights (DRL) on many motorhomes. Often involving just a couple of strips of LEDs on the front bumpers, it seems to be a common accessory on new
European motorhomes – even the budget ones.

This prompted all sorts of questions: what are DRL? And why are they necessary? So, let’s start from the beginning.

DRL are low-wattage lights that automatically activate when the engine is switched on. You’ll have seen many Volvos with their lights on during the day – and that it because it is mandatory to have lights on at all times in some European countries (Poland, Denmark, Finland, Sweden, Iceland, Slovakia and Norway), even in bright sunshine.

The theory is that this improves visibility of vehicles to pedestrians and other vehicles, and hence safety, during the day.

In 2003, the European Commission conducted a study, which looked into the relative costs and benefits of widespread installation of DRL. The findings suggested that DRL reduce the number of daytime accidents involving more than one vehicle or party by between five and 15 per cent.

Our own Department for Transport reckon this figure is somewhere between four and six per cent. Dedicated DRL are said to use around a quarter to a third less energy than driving around in the day with dipped headlights on.

This figure is even greater for LED versions. And although there are energy savings to be had over the use of dipped headlights, the mandatory use of DRL in a country where using dipped headlights isn’t mandatory would still have impact on fuel consumption and emissions – even if the daytime lights were the more
efficient LEDs.

Now, following the implementation of European Directive 76/656/EEC, as amended by 2008/89/EC, all new types of passenger cars and small vans must have DRL fitted. In August 2012 this extends to trucks and buses. This only applies to new types of vehicles - and this is where Type Approval comes in.

Any existing type that was approved before the cut-off date – whether that’s February 2011 for cars and small vans or August 2012 for trucks – doesn’t need to comply. Any car (or van) put forward for Type Approval after the relevant date must have DRL fitted.

There is no law in the UK for mandatory daytime lights at present, so those without DRL don’t have to drive around with dipped headlights. However, this is not the case in many countries (as mentioned previously). Denmark, Italy, Finland, Sweden, Norway and Austria among others require drivers to have dipped headlights on at all times, and in some it is just a suggestion.

Currently, both Bürstner and Dethleffs are fitting DRL as standard.

You can fit DRL as an aftermarket accessory – there are plenty of internet sites and places like Halfords also sell a selection. It might be worth seeing the lights before you buy so yoU can get a sense of how they will fit and what it will take to install them. There are a few things to look out for, though.

Make sure the unit you buy complies with ECE Regulation 87 and is fitted to the vehicle in line with the requirement in ECE Regulation 48. This essentially covers what DRL should be and how they should work.

The lights fitted as standard to new car types under the latest legislation should switch off automatically when the headlamps are on. This doesn’t apply to aftermarket upgrades, and so may not necessarily involve complicated wiring.

However, if the DRL do not switch off automatically, you must manually switch them off when it gets dark. If you are planning to wire aftermarket DRL, bear in mind the complexities of modern base vehicle electrics, what your warranty will allow if applicable and use an expert automotive technician if you’re not confident.

Some of the guidelines state that only two DRL are needed (no more and no less), they must only emit white light to the front and positioned between a height of 25cm and 150cm with a 20 degree outwards and inwards horizontal angle of visibility and a 10 degree inwards and upwards vertical angle of visibility.

This is from the draft individual vehicle approval documents, and aftermarket accessory instructions from Ring highlight the same dimensions but only warn that they should be fitted as so not to dazzle other road users.

The requirement for DRL is based on European Directive 76/656/EEC, as amended by 2008/89/EC, such that all new cars and car-derived vans must be fitted with the lights from February 7, 2011, and all new vehicles from August 7, 2012. At present there are no exemptions for motorhomes.

So for the leisure vehicle industry, the implementation date will depend on the type of base vehicle, eg a car-derived van will already need them, but motorhomes using the more usual commercial van base vehicles will not have to be fitted with DRLuntil the later date.

DRL can of course be fitted earlier by the base vehicle manufacturer; if they are fitted to a new base vehicle the motorhome manufacturer is not likely to remove or disable a DRL. In practice, it is likely DRL will be seen on motorhomes in the next year prior to the final date they are required.
NCC Technical Directorate