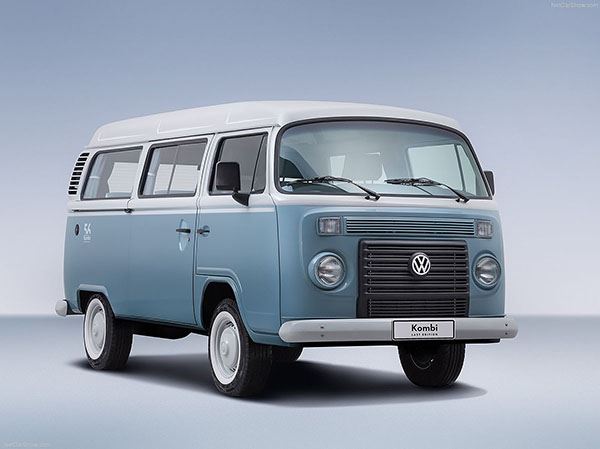 Sales of campervans and their larger siblings, high-top van conversions, have rocketed in recent years, and for good reason – they can offer many of the benefits of larger motorhomes but all wrapped up in vehicle that's so easy to drive it can double up as an everyday vehicle.

Forget images of 1970s bright orange VWs unless you want to relive the flower-power era, with all that will entail in terms of maintenance and restoration. No, today’s campervans have a lot more sophistication, with power of up to 177bhp from a turbo diesel and even optional four-wheel drive.

Most of the major European and British manufacturers now build high-top van conversions. In Britain, the likes of Auto-Sleeper and Autocruise from Swift dominate in the mainstream arena, while there are literally hundreds of smaller converters out there.

For the 2016 season, Auto-Sleepers has enhanced its range of Peugeot and VW-based van conversions. These, including the new Auto-Sleeper Stanway, will be on display at the NEC motorhome show (Hall 5, stand 6.49-6.55), which runs from 13-18 October. You can book tickets to the motorhome show here.

These are vehicles you can drive every day, thanks to dimensions and seating that mimic those of a large estate car or MPV – and many will slide under a 2m car park height barrier or into a domestic garage.

The pros and cons

There are certain benefits and disadvantages of a campervan or van conversion when compared to coachbuilt motorhomes:

The term 'campervan' generally refers to the smaller leisure vehicle, which typically has a pop-top roof and a side kitchen layout. Expect that kitchen to have a two-burner hob and possibly a grill, but a toilet will probably be a portable unit stored in a cupboard and slid out ready for ‘action’. A rising-roof can limit you to the warmer months for touring, especially if you (or your children) intend to sleep up top in the roof bed. However, many new high-top van conversions are now as well insulated as a coachbuilt motorhome, indeed all Auto-Sleeper van conversions have achieved the highest Grade 3 insulation rating.

Don’t think that a campervan has to be a VW, though. Some of the latest alternatives are based on Fords and Renaults and offer a better drive, while Japanese base vehicles (Mazda Bongos, Toyota Granvias, etc) offer a cheaper entry point to the used market. Check whether your chosen campervan will fit into local car parks, or even your own domestic garage or drive, before buying. 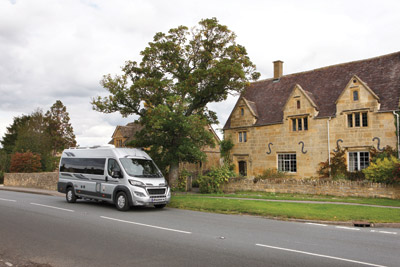 While some of the smaller campervans can be ordered with a fixed high roof, here we are talking slightly larger base vehicles – usually Fiat Ducato or Peugeot Boxer – with a factory high-roof option. Typical six-metre panel vans can offer most of the onboard facilities of a coachbuilt in a slimmer vehicle that feels more manoeuvrable. Here, you can expect full bathroom facilities and there even a few rare examples with a separate shower.

Layouts are often aimed at couples, with rear lounge two-berths being amongst the most popular designs. However, there are also versions with front lounges offering extra travel seats, while fixed bed models are ideal for those who want to carry bulky outdoor gear. Families should consider the latest bunk bed designs.

Aside from fixed bed models, storage can be one of the biggest limitations with campervans and van conversions, while insulation is often less capable of coping with the extremes of winter.

Remember that 6m is about the limit in length for easy parking and medium-wheelbase (5.4m) versions will be easier still. 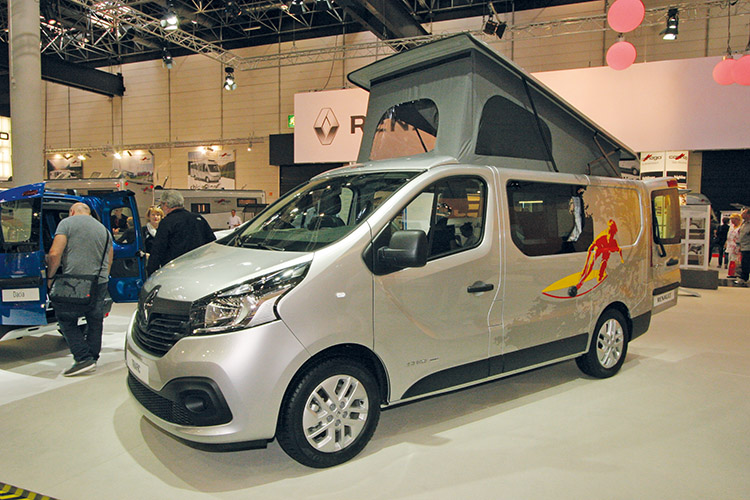 New 2016 models launched at the NEC

If you’re in the market for a new campervan, the best place to head is the Motorhome and Caravan Show at the NEC, Birmingham, starting on 13 October.

Here are companies bringing a campervan for your consideration:

If you're looking for a second-hand model, you can check what's currently available using this online search facility OutAndAboutLive

Of course, before you decide that a campervan is right for you, you should know what else is on the market. As mentioned, the market is split between camervans and van conversions (which make up about 30% of the market) and larger coachbuilts, which account for the rest of the market. But which is best for you?

There’s no straight answer here, it’s a case of horses for courses.  And the assumption that campervans are small and coachbuiIlts are larger isn’t quite right either. Sure, if you hanker after the biggest of big motorhomes and want a nine-metre leviathan, it’ll be a coachbuilt but there are campervans out there that get close to the seven-metre barrier: conversions by the likes of Devon, Lunar, McLaren and RS can be had on the 6.94-metre Mercedes Sprinter long-wheelbase, for example. Fiat’s Ducato van too, has grown up in recent years, with an extra-long version that stretches the tape to 6.36 metres.

Conversely, recent years have also seen the rise of compact coachbuilts – often with campervan-type layouts inside.  There are plenty of sub-six-metre coachbuilts now and some narrow-bodied models that are barely wider than a panel van.

General comparisons see campervans with stronger steel bodies and fewer conversion rattles on the road. However, thanks to tumblehome (that’s the fact that the sides curve in as they rise towards the roof), they have less space inside and, usually, reduced headroom too.

One of the reasons why Fiat’s Ducato and its Peugeot twin are so popular as a campervan base is the fact that they have less tumblehome and greater internal width than most of the competition, so they make great bases for conversion – and one where it’s possible to have transverse beds, fixed or made from settees, that are over six feet long.

The living area entrance is another reason to choose – or not to choose – a campervan. Side sliding doors open up wide to make it easy to get aboard (good if you’re disabled) and they bring inside lots of the fresh air that owners love. Detractors prefer the narrower habitation doors of coachbuilts, citing the draughts and heat loss from wide sliders: one person’s fresh air is another’s howling gale. Though you could always buy an IH van conversion with a coachbuilt-style door – as ever, the motorhome industry tries to offer every possible permutation.

Finally, as panel van bodies are made of quite thin sheet steel, insulation values can be relatively low – especially if the converter skimps when it comes to inserting additional material behind the linings and in the floor and roof.

Thanks to sandwich construction bodywork that includes a thick layer of insulation, coachbuilts are often warmer inside. And as the body is basically a square box mounted on a chassis, tumblehome is not an issue. Take two same-length examples with the same layout and the coachbuilt version will always feel more spacious.

Go for the smallest of campers and almost all will be based on OEM steel-bodied base vehicles. But even here, there’s a little bit of choice as some small Romahomes and Nu Ventures are coachbuilts and proceed on the highway thanks to base vehicles such as the car-like Citroën Berlingo.

Right at the tiny and tinny end of the market there’s the hatchback-sized Romahome R10 and Wheelhome Skurry, which are based on the smallest of vans – Citroën Nemo and Fiat Doblò, respectively.

All of which brings us to an important sector of the market – the rising roof campervan. These are small enough to use as everyday, or even sole vehicles, and usually have rear belted seats, so can be the family car too. Choose dimensions carefully and you can find examples that can sneak under those pesky car park height barriers. After the up, the down: rising roofs make for chilly insides, so they’re best seen as three-season machines. Facilities, too, will be lacking, with a basic kitchen and no separate washroom, although you might get a little loo that slides out of a locker, or sometimes even a fixed unit mounted in the rear.

Things really get interesting when we reach the six-metre class and can do some direct comparisons. And none more so than with the latest batch of compact coachbuilts, which offer big rear access that’s similar to their campervan counterparts. The German Bürstner Brevio started the trend with a width as slim as a campervan and a very similar fixed double bed layout inside.

The clever bit is that the Brevio features a huge tailgate, making it every bit as versatile as its tin-top cousin – especially when it comes to loading kit. Since then, the concept has been developed, with rear lounge layouts (again, matching some offered by campervans) and drop-down double beds.

And in 2015, British firm, Swift, has got in on the act with its similar Rio range, which again is a coachbuilt that is the size of a typical van conversion. This year, it has launched two new models – the Rio 340 and the Rio 325.

Comparisons with bigger coachbuilts can carry on up to just below seven metres and, aside from layout choices, one main difference is width. A Ducato campervan is just over two metres wide, whereas ‘standard’ coachbuilt width is around 300mm (12 inches) wider, with some porkers’ girths reaching over 2.40 metres.

Upmarket A-classes, and some continental low-profiles, have something campervans do not and that’s a double floor – its cavity housing tanks and pipes in a heated space. Finally, for sheer space and payload you can’t beat a coachbuilt, especially if you want to carry loads of big kit and need a garage to put it in.