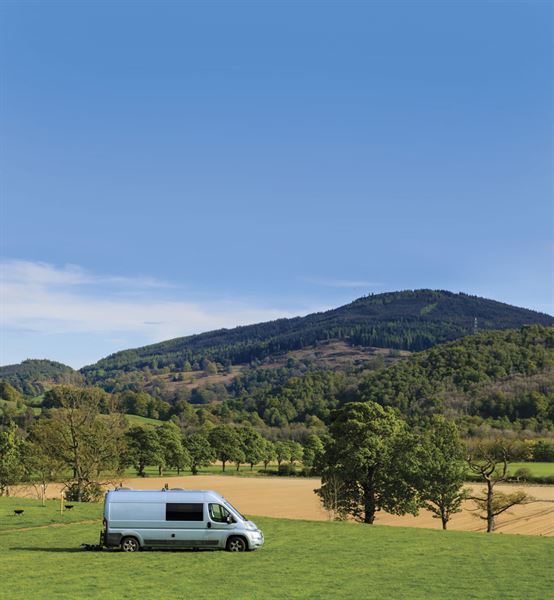 It’s not the best start to a new lifestyle as campervan owners – being flown home from your first trip, with your custom-converted panel van left stranded in Europe. Especially when you have three children under 10 in tow.

Fortunately, Andrew and Malize can’t fault the way their insurance company handled their crisis. When it was obvious that parts required to repair the clutch would take too long, the insurers flew them home from Salzburg in time for the new school term. Their Fiat Ducato returned the long way, a few weeks later.

“In retrospect it was a big mistake not having a test trip beforehand,” Andrew says. “We didn’t have a clue as we’d only been tent camping before and hadn’t learnt the best ways to use a campervan. For instance, Malize didn’t sleep well on that trip because the rock ‘n’ roll bed was too hard, but we now use a topper.”

Life on the farm 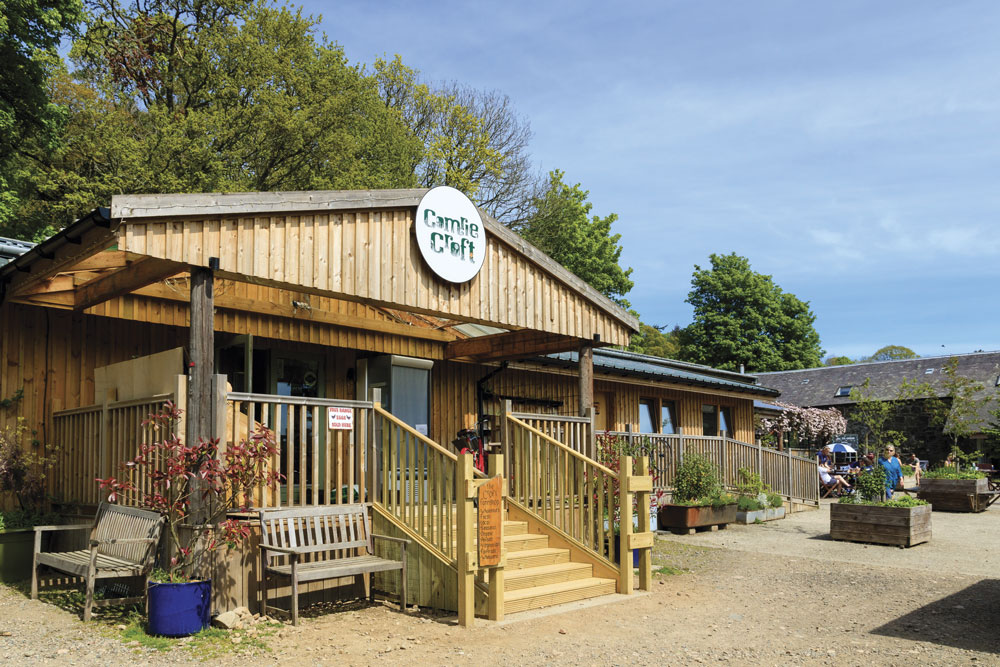 My friends, Andrew and Malize, are Directors of Comrie Croft, an eco campsite in Perthshire, Scotland. This award-winning green destination includes a farmstead hostel, camping, Nordic kåtas and walking and mountain biking trails.

Originally a small farm that struggled to support one family, Andrew’s vision as founder of Comrie Croft has turned it into a business employing many more people. Several independently run enterprises are now based there too, including Tomnah’a Market Garden, the Tea Garden and Comrie Croft Bikes.

The place is busy all year but it tends to be non-stop from Easter to the end of October. Situated on the A85 between Perth and Crianlarich, it’s close enough to the populated central belt of Scotland for day trips and weekend breaks, but can also be visited en route by anyone heading further north.

The farmland is half grassy pastures and half woodland frequented by deer and red squirrels. It rises steeply, giving great views and a good drop for several compact but challenging mountain bike trails.

Comrie Croft sounds like a fun place to raise their children, Harris, Rannoch and Poppy, who are now 11, nine and seven years old. But it can be all-consuming, as Andrew explains, “We live in the centre of the business here, which we love, but it means when you’ve got days off it’s nice to escape. And, as there’s so much going on, it tends to be a last-minute escape. Tent camping isn’t Malize’s thing any more – not with children – as it’s a lot more hassle to get organised.”

Time for a campervan

In 2015, they made a decision to look for a campervan, with Andrew searching online when he had a spare minute. Most potential vehicles were a long way away and they didn’t have the time to tour the country to see what dealers had available “in the flesh”.

What soon became apparent was that most campervans on the market have no more than four berths. And the more they looked the more they realised the old adage that choosing any campervan involves compromises – it’s a matter of deciding what is essential for you and what you can do without.

“For Malize any vehicle had to be as safe as possible,” Andrew tells me. “One reason we went for a custom conversion was because it was really hard to find a campervan that would seat five with five three-point seatbelts. A lot of older vans that were within our budget had lapbelts.”

So they decided to create their own campervan and started searching for a suitable base vehicle to convert. It needed to be usable all year round for weekends away on the west coast of Scotland and for a longer holiday abroad in the summer.

A high-top panel van looked like the best bet, as the winter weather is often too cold and windy for using a pop-top. Also, the extra width would make it easer to fit everything in. But they didn’t want to go longer than 6m, so it was easier to use as an everyday vehicle – for instance, picking the children up from school – when required.

Andrew homed in on the Fiat Ducato, as the MultiJet engine seemed to give good fuel consumption. In the end he went to Leicester to see one he’d found online from a dealer. “We bought it – a 2010 model with 86,000 miles on the clock – for £8,500,” he says. “I know the advice is don’t buy a builder’s van, but this wasn’t obvious, though we discovered later that it probably was.”

The next decision was where to get the conversion done. Ever the optimists, they’d booked a ferry for their first campervan trip abroad, so had a deadline for its completion. Andrew didn’t want to travel too far away.

“We looked at several companies in Scotland, but they were all more established, so it was going to take too long as they book up a long way in advance. In the end we chose Vanguard, a small company in Fort William.

I like small businesses where you talk to the person who’s actually doing the work.”

Vanguard Conversions specialises in VWs, so this larger panel van conversion was a bit of a one-off. Andrew codesigned it with the team, using a scale blank of the interior to draw out what he wanted, then relying on Vanguard to adjust it to what would work and fit.

“It was clear from the beginning we wouldn’t have a washroom,” he says. “On longer trips we go to campsites when we need a wash, for two days of wild camping we tend not to bother. We just make sure everyone brushes their teeth and changes their socks and pants!”

The design they came up with was to install a three-seat, crash-tested rock ‘n’ roll bed, with a double bunk bed at the rear and, opposite it on the nearside, a generously proportioned kitchen with sink and two-burner hob. Vanguard created a fifth bed to pull out beside the lower bunk.

However, this didn’t prove to be very functional because Andrew and Malize like to sit up at night having a cup of tea after putting the children to bed and the fifth bed prevented access to the kitchen. Instead, their oldest boy, Harris, came up with a more fun solution – a hammock strung above the cab seats, instead.

“We also put in, at great expense, a double front seat swivel, but then found that there’s no room to turn it round”, Andrew relates ruefully. However, the double seat does mean that it’s also possible for Harris to sleep across the front seats with pillows filling the small gap between it and the driver’s seat.

Their brief included that the campervan should be usable in the winter for skiing. This has worked well with sufficient insulation and an effective gas-fuelled heater blowing hot air from vents under the bed.

The gas bottle and a water container are kept under the sink, and not having external water tanks or many pipes means there is little risk of damage from freezing. Storage under the bunk beds is long and roomy enough for five sets of skis, which can be slid in and out from the rear doors.

In fact, there’s plenty of storage all round, with big cupboards over the kitchen units, overhead cupboards along the offside and the usual overcab space for shoving in duvets and pillows. Bedding and soft items can be left on the two permanent bunks, while hooks installed on the back of the front seats carry everyone’s daysacks.

As well as skiing, the family enjoys other outdoor activities, especially mountain biking and hill walking. They fitted a four-bike carrier on the towbar and pop the smallest bike inside when travelling.

A roof rack on top means they can also carry their sit-on canoe, which enables an adult and child to paddle around beautiful places such as Silver Sands on the Morar Estuary.

Fortunately, the breakdown occurred at the end of their first ever trip, when they were heading home from Italy and Slovenia. Since then no further disasters have struck.

The following summer they toured the length of the Western Isles, spending every second or third night on a campsite, which gave the kids a chance to make and play with new friends. Last summer they took a ferry from Plymouth to Santander and had a glorious time in northern Spain, particularly enjoying the mountains of the Picos de Europa.

Five years on, they are glad they took the plunge, though with experience they would change some aspects of the conversion. “We all love the campervan,” Andrew says. “It can sometimes be a bit fraught trying to get away but, once you’re off, it’s brilliant.

There’s something about camping, when you’re all sleeping in the same space, that’s really quite fun. The kids all jump on you in the morning when you’re only half-awake. Whenever we use it we get family time together – that’s good.” 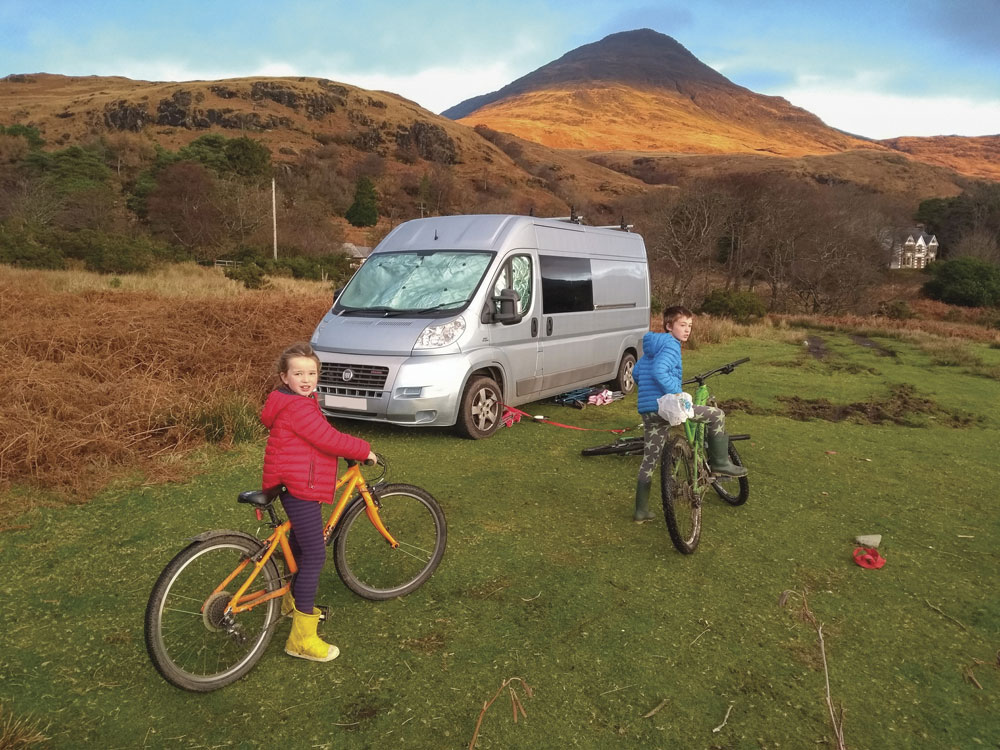 "Summer 2017 to the Outer Hebrides. We took the ferry from Skye to Tarbert on the Isle of Harris and then island- hopped south to Barra and Vatersay. The weather was mixed but the beaches and great outdoors are some of the best in the world. We almost had them to ourselves and even when the weather isn’t brilliant, it’s great to play games and cards with the kids in the cosy ’van. The children even won prizes at the Eriskay sandcastle building competition, too!"

The campervan costs so far