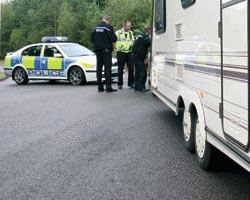 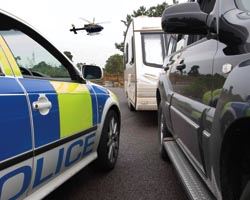 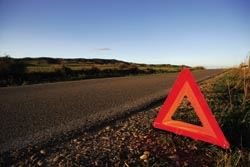 PHANTOM is still winning the war against the caravan and motorhome thieves, but is now turning its attention to exciting new products, that will increase your comfort and improve your safety.

There is a huge choice of security products available, but most of them are centred around the old staples such as hitch-locks, wheel-clamps and security posts.

Locks, alarms and immobilisers are good at preventing the casual thief, but if an organised gang has targeted your caravan or motorhome, there is little that can be done to prevent its eventual removal.

If you really do treasure your vehicle, it is still possible to stay one step ahead of the thieves by installing a tracking system.

It is comforting to know that your possessions can be recovered within a short space of time, quite often before the thieves have even had chance to set foot inside and leave you with the feeling that your personal space has been violated.

Phantom produce two different security products, both specially designed for use with caravans and motorhomes.

Both systems make use of a Global Positioning Satellite system, enabling Phantom’s 24-hour monitoring centre to pinpoint the location of your stolen property.

This enables the police not only to make a speedy recovery of your property, but also to catch the thieves, thereby saving other people the worry and inconvenience that a theft incurs.

At the heart of both Phantom tracking systems is a single, compact unit fitted covertly inside the bodywork, giving no clues as to their whereabouts.

Phantom Target for caravans and motorhomes

This system utilises 24 orbiting GPS satellites to deliver accurate location information on demand to a dedicated call centre within moments of your theft being reported.

Phantom Target locates through a 12 channel receiver built into the system’s on board ‘blackbox’. When instructed to reveal its location an encoded SMS message containing satellite observed co-ordinates is converted on to a street level map and will be accurate to within 10 metres.

This location, along with the crime reference number obtained from the client, is used to engage the services of the local police and gain recovery of the stolen caravan.

As they require no special equipment of their own, the police can simply despatch the nearest officers. Recoveries are likely to be swift and the caravan is likely to be recovered in the same state as when it was stolen.

Phantom enjoys a good working relationship with the police who recognise the contribution the system makes to overall crime reduction and are always willing to respond in a timely manner.

The Phantom Target systems are also the first in the UK to be awarded Sold Secure Gold status - the industry standard for caravan security.

The Phantom ProActive device, as its name suggests, is able to communicate directly with the call centre and report on the status of the caravan it is protecting.

This ingenious device monitors the caravan’s alarm system and, should the alarm trigger, sends a message to the call centre carrying the location of the caravan.

The call centre are thus able to phone you and confirm whether the alarm has been triggered by thieves or yourself.

If no alarm is fitted to the caravan you can still benefit from the rapidly communicating ProActive unit if you have one of Phantom’s tiny movement sensors fitted.

This is hidden at the time of fitting the main unit and comes with a small switch that can be fitted in a convenient, yet suitably obscure location, that has very little chance of being discovered by an intruder.

In this way, you can switch the movement sensor on as you leave the caravan and switch it off when you wish to move it yourself.

Importantly, the movement sensor sensitivity can be adjusted to meet your individual requirements and would normally be fine tuned to trigger on the movement of the caravan itself rather than movement within the caravan, so avoiding false alarm calls.

Both units are concealed within  your caravan, drawing the minimum of power from your leisure battery.

It would take in excess of 6 months for the unit to drain an 85Ah battery,  so you can take comfort in the fact that your caravan is still being protected, whether on-site or in storage.

The units have a backup battery that will still work if thieves cut the main battery power to the caravan.

Cutting power to the system will also prompt the control centre operators to relay this information to the customer.

Satellite location enables the average recovery time to be less than two hours and far quicker for caravans with a ProActive unit.

The Phantom unit works throughout Europe and no extra charge is made for this service.

The Phantom systems are transferable from caravan to caravan so costs are kept to a minimum. Most insurance companies recognise the benefits of the Phantom tracking system and will offer you a discount if you have one fitted.

The system can also be considered a monitored alarm with 24 hour cover, much as you may have protecting your home and it’s contents.

There are no hidden charges, so you simply buy a unit choose a subscription and the cover starts. The only extra expense is optional, where for a small fee, you can arrange to have any security alerts also texted directly to your mobile phone.

These now include Tyre Protector, which is a cheap solution to blowouts and the aggravation caused by a puncture, but more importantly reduces the potential for serious damage and injury.

Phantom now supplies satellite television systems that will receive the Astra 2 South beam across most of Western Europe, giving access to BBC News, Sky News and CNN as well as plenty of European channels.

The entry level options are provided by the Flat-Sat antennae that will offer picture quality on a par with the most expensive systems - they simply require a two to three minute manual set up.

Domes are our most popular option, as there is no unfolding process or dish to catch the wind on the roof. The TracVision range from KVH comes with their fantastic marine pedigree with great coverage and prices to match. Domes can also be used on the move – impossible with a dish.

Reversing cameras and alarm systems can be fitted for every make of caravan and motorhome, with 27 fitting centres around the country.

Phantom has been dealing with the major insurers and with the National Caravan Council for eight years.

Indeed, it was Caravan Guard who approached them to devise a solution to the rising problem of caravan theft, which eventually led to the a caravan being fitted with the first Phantom Tracking System.

After constant revision and improvement, this has resulted in excellent relationships with most major insures, who will often refer you directly to a Phantom system. The Camping and Caravanning Club also recommends Phantom tacking systems and alarms to their members.