In the earlier years, it grew steadily despite the 2008 recession and became established as one of the UK’s leading van converters.

Then, three years ago, this Yorkshire-based company was bought by the Rapido Group giving the French motorhome manufacturer a strong presence in the UK’s burgeoning campervan market.

Now WildAx is about to invest millions of pounds in a new purpose-built factory, which will be ready in two years and will allow it to continue to grow.

The company now employs 57 people – a figure that has grown and will continue to grow as it increases its production capacity and moves into its new factory.

But, as far as customers are concerned, the impact of the Rapido buy-out and the company’s continued expansion has been minimal, explains WildAx Managing Director, Duncan Wildman. There are certainly more models in its range and the number of campervans it builds each year has increased, but the feel of the company is still the same.

“Whilst we have been part of the Rapido Group since 2017, we maintain the small family company feel and approach that has made us popular with many customers and dealer partners,” he says. “We focus strongly on attention to detail and quality and the ability to provide a great service to our customers.”

Unlike many campervan manufacturers, WildAx converts a wide variety of base vehicles. While it is well-known for its high-spec Citroën Relay conversions, it also now converts the Mercedes-Benz Sprinter, the Ford Transit Custom, the ubiquitous Fiat Ducato and the Renault Master.

This almost unrivalled choice of base vehicles from a single manufacturer means WildAx offers something for most buyers, as Duncan explains. “The Citroën is the perfect size and shape for a van conversion motorhome with good spec and it offers good value for money,” he says.

“The Fiat offers the same benefits as the Citroën but comes with the addition of an excellent optional nine-speed automatic gearbox.

“The Mercedes speaks for itself – it has a great badge following and an impressive quality of build.

“Meanwhile the Renault is solidly built and has a great six-speed auto and the Ford not only has a really modern design, but also offers a great driving experience.”

Interestingly, while the choice of WildAx models is now greater than ever – there’s the Aurora, Constellation and Pulsar (Citroën), Elara (Mercedes), Solaris XL (Fiat), Europa (Renault) and the Triton and Proteus (Ford) – there is one model that has proved to be its best-seller for years, although this is now being challenged by a relative newcomer.

The four-berth Solaris XL remains the company’s most popular model accounting for one-in-five of all new models sold. When launched, this extra-long (6.35m) Solaris opened up a new demographic for the company as it appeals to families.

But now it is being challenged by the much shorter (5m long) Pulsar, which is also accounting for about 20% – or 60 a year – of sales.

The increase in sales – WildAx is now producing 300 campervans a year – is not just down to its much greater range of models, although that has certainly helped attract new customers, says Duncan. “Is it the model range we offer changing and, therefore, attracting different types of customers?” he asks.

But the increasing sales is also thanks to the growth in the number of WildAx dealers. Three years ago, it had five and now it has nine dealers selling across 10 locations. This means viewing a WildAx has become much easier for many potential buyers.

But who are these buyers? “Like all motorhome manufacturers, our customers come from a wide range of ages and backgrounds,” says Duncan. “This is particularly true of WildAx as we have models aimed at the small family, the retired couple and younger people who are new into the market.”

With prices starting at £48,000 and topping out at just shy of £70,000, a new WildAx campervan is a significant investment. That said, the average customer spends around £57,000 on a new WildAx, which is comparable to well-specced BMW 5 Series Touring.

When one compares the cost this way, it becomes clearer why families are opting for a three or four-berth campervan over a new car. This is why Duncan is confident enough to invest in a new multi-million-pound factory (see panel). “Demand for campervans/van conversions will continue to grow,” he says. “Which is perhaps due to the ease of driving and flexibility of designs.”

The coronavirus pandemic has affected WildAx as it has all manufacturers. “Yes, there was an impact on production – 10 weeks closed and four weeks at reduced production levels – however, we are seeing extraordinary demand for motorhomes since the dealers reopened on 1 June.”

As a result, production went back to normal levels on 1 July.

While it has a strong portfolio of campervans already, WildAx is also developing its smaller camper range with new models on the Ford Custom. It is even researching options on other similar base vehicles.

“We are also working on new layouts on the high-top range,” explains Duncan. “As always, we look to develop our current range to keep it fresh and modern, therefore we will launch some updates to this range in February 2021.”

With the growing availability of hybrid and electric versions of several of the vans it converts, there is a possibility of some of these eventually becoming WildAx campervans.

“Although there are no plans at the moment, due to availability of vans, when they are available, we shall certainly look at this option,” says Duncan. “Currently there are issues with range and weight – both very important for motorhomes but not so much for delivery vans. I think we are a few years away from seeing a viable option for this on the market.”

With so many large manufacturers now building campervans, as well as the hundreds of smaller converters scattered around the UK, it is a challenge for any company to make its presence felt and attract buyers’ attention.

Yet, WildAx has managed to do this is a relatively short space of time. “Customers have always wanted great quality build, value for money and great aftersales care,” says Duncan. “And this is what WildAx gives them.”

He says anyone looking for a campervan, especially the many newcomers to the market, should take their time and not rush into a purchase.

“Research carefully what the different layouts have to offer for you,” he says. “Obviously, price is a concern but try not to let that be your primary motivator – look at specification versus price, look at how easy beds are to operate, how comfortable the seats and beds are and what is most important to you in a layout. For example, do you want a fixed bed, comfy lounging area, great storage, large kitchen, full washroom, winterisation and wild camping ability, as it is not always possible to get all these items in the same van?

“Also, speak to current owners, join online groups or forums to get more information about long-term ownership of a brand – some offer better service than others.” 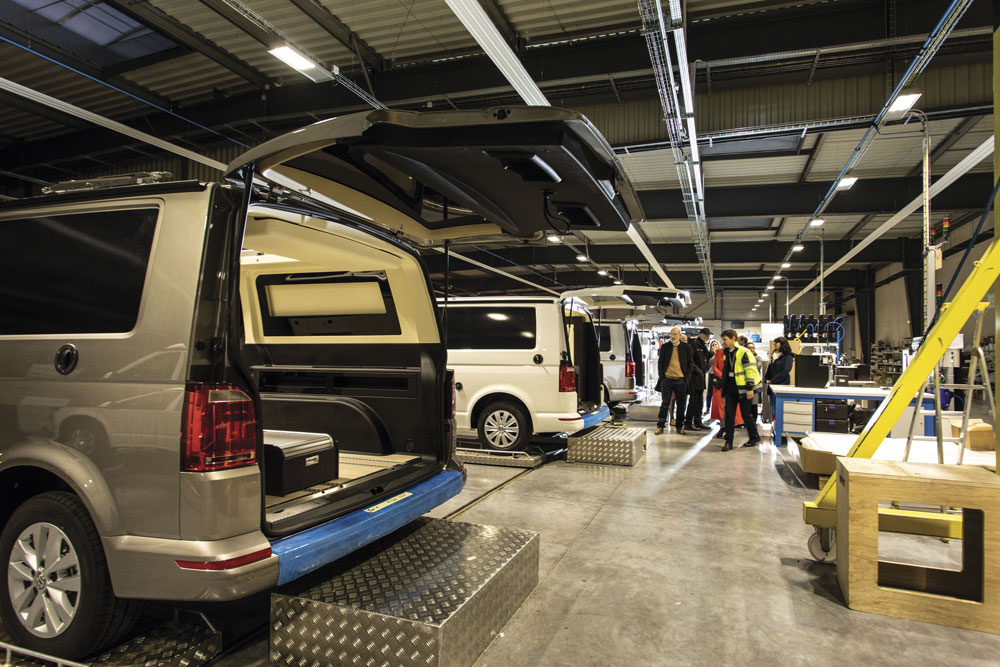 It is planned that, within two years, WildAx will be operating from a new purpose-built factory just a mile from its current base in Elland, West Yorkshire.

“All our staff will move to the new factory with the possibility to increase staff numbers as production levels increase,” explains Duncan.

“We will manufacture all our models in one location, as we currently have two production facilities. We will have areas for woodworking, chassis prep and post production testing. There will be two automated movement production lines with conveyor systems to move the vehicles through the factory.”

What it will not do is sell campervans from the factory. “We are committed to being a manufacturer not a retailer. Our motorhomes are sold through our network of great dealerships spread round the UK.”

While the final cost has not been established, it is expected to run into millions of pounds and, as WildAx is part of the Rapido Group, its parent company will naturally be involved in the project.

The new facility, which is based on a new Rapido factory already operational in France, will allow further development of WildAx’s manufacturing processes and to allow future growth.

“We hope to gradually increase our output over the next few years in the same way that we have done so since our start in 2006,” says Duncan.

It may also build some models for export. “There will certainly be the capacity for the volume needed if we decide to start exporting motorhomes,” he says.

If you're interested in campervans, have a look at this great magazine, which is published just for campervan enthusiasts. Better still, it is available as a digital magazine so you can download and enjoy it now. Get your copy of Campervan magazine here.