Me & My Van: Caravan tourers Colin and Anna Gunn 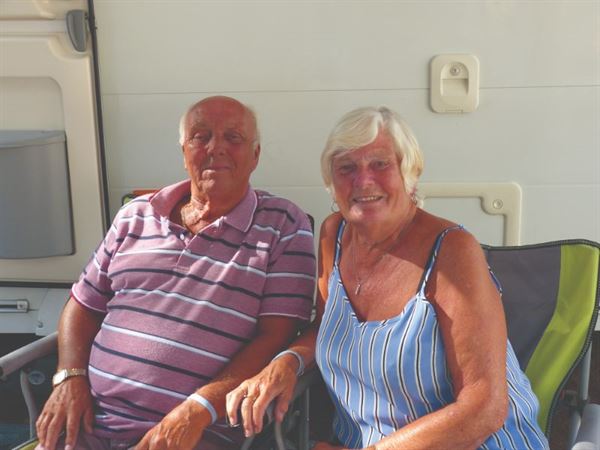 From a second-hand Thomson that lacked all mod-cons to a comfortable Bailey perfect for long-haul caravanning. Sharon speaks with Colin and Anna Gunn.

How did you get into caravanning?

Holidaying together was difficult, I had a transport firm transporting static 'vans all over the country. We hadn’t had a holiday together for three years, then a friend came to our rescue, lending us his caravan for two weeks in Tenby.

The weather was great, and we’d come off the beach at 8pm and pop into the local shop to buy something to BBQ later.

When did you buy your first caravan?

Anna’s dad retired in 1980. At his retirement party we started chatting to the local Post Office lady who was selling her 'van. It was a Thomson and cost us £325.

Oh, dear, it quickly killed our Austin 1800 — it was way too heavy, and we had to quickly upgrade to a 2.5-litre Ford Granada. We also had an Old English Sheepdog who sat on the back seat with the kids. We needed more space.

Tell me more about the Thomson

It was a 1965 model with gas lighting, foot pump and no mod cons. After three years we sold it when an opportunity came along to buy an ABI with running water, electricity, and a double bed at one end and another in the middle with a bunk bed above.

And now you have this beautiful Lunar

Yes, we purchased it new 10 years ago. It has everything we have ever wanted, including a fixed island bed, so no more climbing over each other. Until three years ago we caravanned close to home due to Anna’s mum. She was elderly and, if needed, we could get home quickly. When she passed away, we started our long-haul caravanning.

Long haul — where do your travels take you?

We’re away for three months at a time now — the first year we did Spain, Portugal and France. The following year we included Switzerland and, this year, France and Spain so far.

We also take our great-grandchildren caravanning in Yorkshire; and love the odd break in Devon, Cornwall, Norfolk, Dorset and Lincolnshire.

And you favourite caravanning region?

Golly gosh, there is so much to choose from. If the English weather was reliable we’d stay in the UK around Charmouth in Dorset and Brixham in Devon. Not the main, busy tourist places but the little out-of-the-way villages where you can eat delicious fish and chips, but the deck chairs are getting smaller — well, that’s what Colin says!

With all your journeys have you ever had to call for help?

We were driving in convoy when John flashed his lights, telling me to pull over. Our caravan brakes were locked on and smoking. The RAC lorry came and took the 'van to our local dealership.

We continued to Welshpool where we waited for John. We waited and waited until we retraced our footsteps to find him pulled over — his gearbox had gone. A second RAC lorry was called. We continued, this time me pulling John’s 'van.

Two miles out of Welshpool his caravan blew all my electrics, we were dead in the water! A local lady took pity on us, allowing us to use her telephone and supplied us with cups of tea until our car and his 'van were loaded onto the third RAC lorry. The usual five-hour journey became a 24-hour saga!

We were travelling through France when I had a puncture on a busy flyover. I changed the wheel and carried on. Then the car overheated and a breakdown lorry was called. It took the car and my wife to the garage. I waited with the 'van for a second truck, not knowing that the first one had now broken down.

Anna spoke no French and the guy spoke no English. I’m now at the garage watching the Tour de France in comfort while they’re struggling to get back. We spent the night on the forecourt with no water. We were gasping for a cuppa and then it started to rain. We opened the windows catching the falling rain into jugs, so we could make that much-needed cuppa!

If you’ve got past Portsmouth with your passports, insurance paperwork and money, anything you have forgotten can easily be purchased.

Have a routine! Anna gets the inside of the van ready for travelling and I’m outside. We do the same jobs when coupling — the perfect double act!