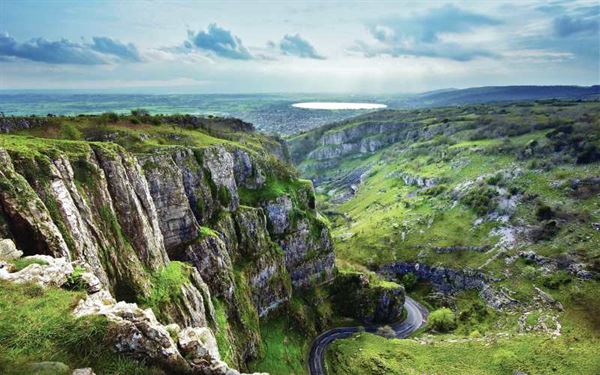 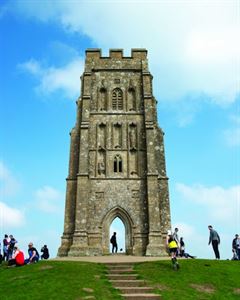 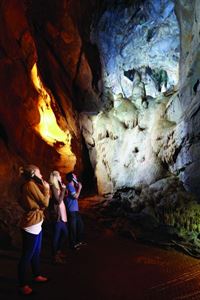 You don't have to be in the festival mood to enjoy a break in Somerset. Here are some caravan travel ideas!

Glastonbury in Somerset is a unique and fascinating town, with a hippy culture that'll whisk you right back to the 1960s. It's a place of liberal attitudes, peace and enchantment, music, relaxation and chilled-out fun.

Anything goes at Glastonbury as long as it's legal-ish. There are rows of shops selling a wide variety of weird and beautiful fashions, 'healing' gemstones, crystal balls, magic wands, books on mysterious topics, 'medieval' swords, smoking apparatus for erm... herbs, mythical ornaments, and all kinds of other quirky bits and bobs.

You can take part in a guided meditation in one of the town's meditation centres, or do your own thing in the beautiful Chalice Well Gardens, famous for their sacred well and natural red spring, coloured by iron oxide. It's said to represent the blood of Christ, or the waters of Mother Earth, depending on your particular religious persuasion. 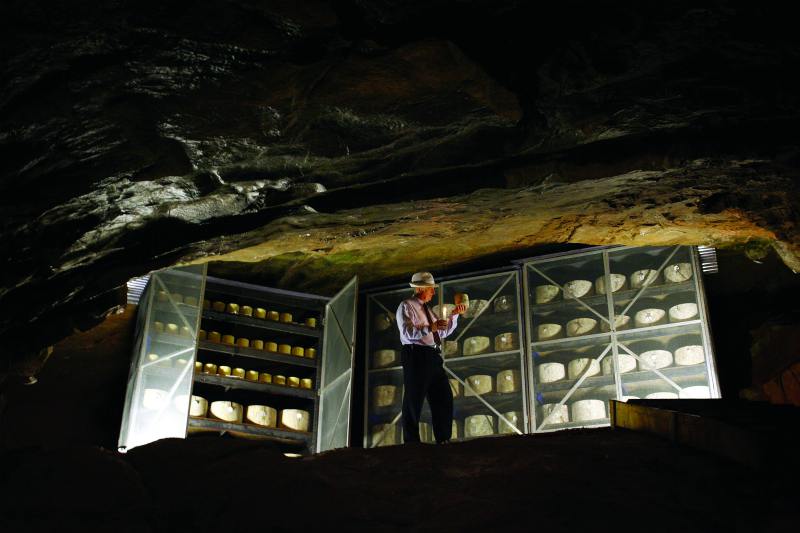 So it's with a sense of excitement that we turn up at The Old Oaks Touring Park in Glastonbury and pitch our tent. The campsite is within a short walk of the Tor and has clean facilities.

We arrive on a cheese and wine tasting day and tuck into some local produce before walking across the hills to Glastonbury Tor. It takes about 25 minutes to ascend the steep hills, but it's worthwhile – the views are amazing!

At the top of the Tor stands the medieval Tower of St. Michael, which according to legend, was built to dispel any notion that the hill had paranormal or occult powers. Today people still use it as a place of pagan pilgrimage, to meditate and appreciate the vast landscape surrounding Glastonbury. From the top, you can see for miles in all directions, across the Somerset Levels to the Mendip Hills and beyond.

Glastonbury Tor is the legendary home of the faeries and the entrance to the underworld. There are many such myths and legends surrounding the town; not least that King Arthur and Guinevere were buried in the Abbey Grounds. After taking in the hill-top views, we pass a few hippies in quiet contemplation, and descend the hill, heading towards the town.

Glastonbury town centre is unique, colourful and full of eccentric characters. A spirited chap in tie-dye clothing lays out hand-crafted necklaces and wooden flutes on a rug in the high street, hoping for a few sales. Others are playing music, and hoping passers-by will throw coins in their hats. Glastonbury is home to the spiritual, the unconventional, and the misfits. I fit right in.

We walk around the shops, and my husband, Vic, starts sneezing – he's overcome by incense. So we head inside the Old Tribunal where there's an exhibition about Glastonbury Lake Village, a human-made island dating back to the Iron Age.

A short stroll away is Glastonbury Abbey, which dates back to medieval times and was once the second wealthiest Abbey in England, after Westminster Abbey. The Abbot lived in sumptuous surroundings and had great power. His kitchen reflects this position and is the only part of the original Abbey that remains intact.

The legend of King Arthur's burial inside the Abbey grounds states that the King was mortally wounded at the Battle of Camlann in 537. He was taken to Glastonbury Abbey for medical treatment but died there, so the monks buried his body in the cemetery beside the Lady Chapel.

Then in 1191, Henry II asked the Abbot to dig for King Arthur's bones. The monks unearthed a huge oak coffin bearing the words 'Here lies King Arthur buried in Avalon' in a medieval text.

The coffin contained two bodies, said to be Arthur's and Guinevere's. They were moved to a tomb in the Abbey Church, but when the Abbey was destroyed during the Dissolution of the Monasteries in 1539, the bones vanished and haven't been seen since.

The Avalon Marshes, also linked to Arthurian legends, are now cherished for their tranquillity and abundant wildlife. We visit Shapwick Heath Nature Reserve, and a short circular walk takes us off the beaten track into a wildlife haven. Here we spot froglets, a slow worm, dragonflies, damselflies, wildfowl and butterflies. We enjoy the experience so much that we visit Ham Wall Nature Reserve before the end of our weekend break too!

It takes a full day to explore Cheddar Gorge, made famous by its stunning landscape, caves, and of course its delicious cheese! Britain's oldest complete skeleton was found inside one of the caves in 1903, and it's believed to be around 9,000 years old. The skeleton, named The Cheddar Man, has a museum dedicated to him and his way of life, in the heart of the Gorge.

The two caves in the Gorge are delightful, with dramatic calcite waterfalls, bacon rind formations, stalactites and stalagmites, pillars and pools.

Visit Gough's Cave for the best formations, and explore Cox's Cave and the Crystal Quest for colourful lights, goblins and dragons. Walk up Jacobs Ladder and climb the tower, for fantastic views across the Mendip Hills. If you have the energy, there are walks along the cliff tops too. 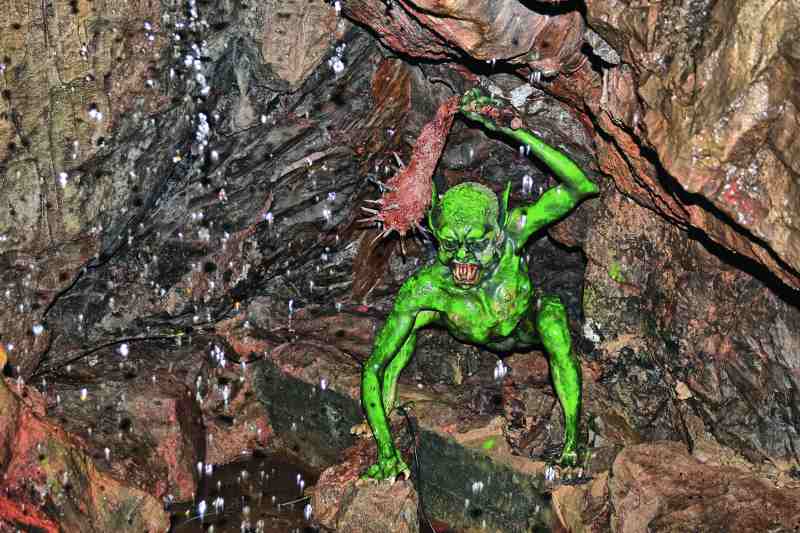 The shops in Cheddar offer a wide variety of treats from specialist cheeses, to Somerset ciders and souvenirs.

It's a 20-minute drive from the campsite to Wookey Hole, another fantastic cave you can explore, and home to the Witch of Wookey, who appears in residence at peak times. Visitors hear stories of the witch, explore the illuminated caves, and see cave-ageing cheese.

The caves are stunning, with underground lakes and strange rock formations. In 2015 a new tunnel was blasted through the rocks, extending the visitor route to two chambers, previously only accessible to cave divers. One has a vast subterranean lake and unusual rock formations.

This tunnel makes Wookey one of the biggest showcave systems in Europe. Other attractions at Wookey Hole include a Victorian penny arcade, a cave museum, dinosaurs, a circus show (weekends only), and crazy golf. 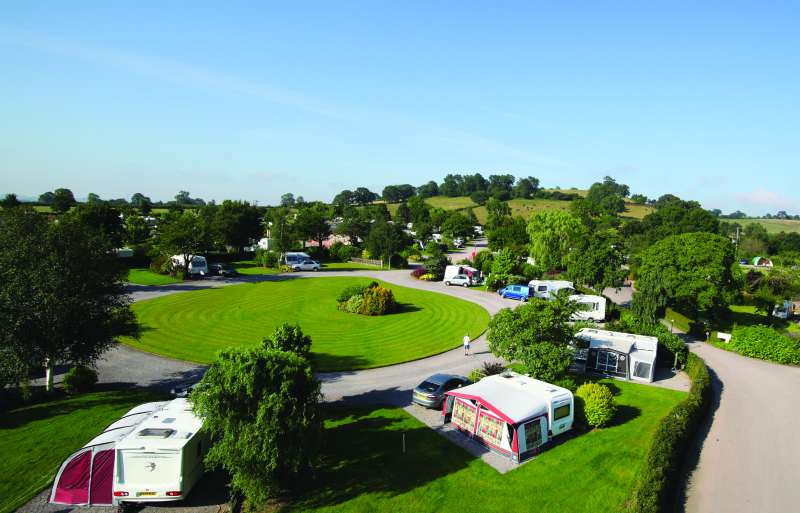 This adults-only campsite is a luxurious caravan travel site, with a stunning, new five-star toilet block, offering a choice of communal washrooms with private cubicles, or individual private washrooms, all sparklingly clean. There's a laundry area with washing machines and ironing equipment and an indoor washing-up area. There's a nice older block in the orchard too.

Glastonbury Abbey
Magdalene St, Glastonbury, Somerset BA6 9EL
T 01458 832267
W glastonburyabbey.com
Open 9 am until 8 pm in the summertime, and 9 am to 4 pm in wintertime.
PRICE £7.60 per adult (online discounts available)