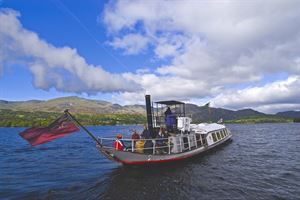 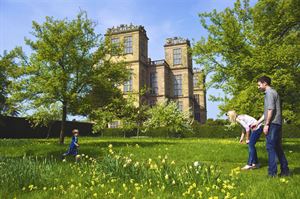 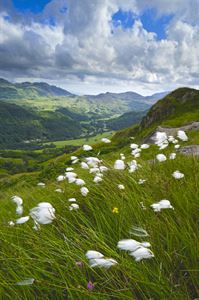 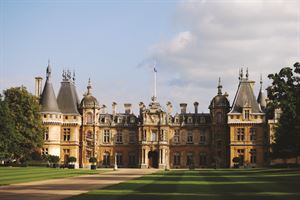 Around 120 million people visit National Trust properties and landscapes every year. Without the hard work of its 61,000 volunteers and over four million members, these special places would be nowhere near the standard of incredible attractions that we know and love.

The Trust covers England, Wales and Northern Ireland, but the National Trust for Scotland is a separate body. It also has 120 volunteer firefighters, 15 volunteer pilots, and 45 volunteer toad patrollers, who help to save toads on the North York Moors.

Here are just some of the reasons why we're celebrating The National Trust as a National Treasurer for caravanning in the UK...

Head here and feast your eyes on one of the most spectacular houses you can experience, anywhere in the world.

Did you know that you can visit the Chilterns and find yourself in a French Renaissance château inspired by the Loire Valley? Waddesdon Manor was built in that distinctive French style in 1874, for Baron Ferdinand de Rothschild.

The house has many claims to fame. Its exterior doubled as Haxby Park in the second series of Downton Abbey, and parts of its interior stood in for Buckingham Palace in the Helen Mirren film The Queen. It’s also where a real queen, Victoria, caught her first sight of electric lighting. She was, apparently, very impressed.

Even the approach to Waddesdon Manor is extraordinary. As you walk from the car park there are stunning views of the Chiltern Hills.

Victorian-style gardens, ornate fountains, and a magical woodland playground and trail entice you, and there’s fantastic food on offer in the old servants’ hall. The house has paintings by Reynolds and Gainsborough, and there are also some unexpected and delightful things. The aviary in the gardens has rare species such as the banded pitta bird, which has very few breeding pairs anywhere in the world.

Then there’s the wine. The Rothchilds are linked to the two great vineyards, Château Lafite Rothschild and Château Mouton Rothschild. There are more than 15,000 bottles of wine in Waddesdon’s cellars, which are open to the public, and the wine shop stocks bottles you simply can’t get in the major chains.

You may think of the National Trust as being a custodian of stately homes, but it’s also the nation’s largest farmer, and it owns the Khyber Pass.

That is to say that the film Carry On Up the Khyber was actually filmed in Wales on a National Trust farm. You pass through Hafod y Llan Farm if you’re scaling Mount Snowdon on the famous Watkin Path.

The farm is 218 hectares, with the lake Llyn Gwynant at its base, and extends into the mountains, almost to the top of Cerrig Cochion. The Watkin Path is a true landmark in terms of our right to walk in Britain’s wildest and most beautiful places, because there was no footpath of its kind in Britain when William Gladstone opened it in 1892 in front of a crowd of 2000 people.

Why not pay a visit to Wayne Manor and see if you can recognise the rooms used by Batman? The inside of Osterley Park in the West London suburb of Hounslow played the part of Bruce Wayne’s house in the 2012 film The Dark Knight Rises.

Director Christopher Nolan was looking for a new, rebuilt Wayne Manor after depicting the destruction of the previous Wayne Manor in his film Batman Begins.

The exterior of Wayne Manor was Wollaton Hall in Nottinghamshire, and the film’s cityscapes were an amalgam of New York, Pittsburgh, Los Angeles and London.

Nolan shipped the cast, and Gotham City, over to 16th Century Osterley, partly because it already has a real secret door, in a library bookcase. Supervising location manager Nick Daubeny and his team were able to build a real bat cave from that door. Osterley’s staircase was even repainted in a dark colour to add to the menacing atmosphere of the film.

Osterley is one of the National Trust’s most popular film locations – starring in the 1960 film The Grass is Greener, as well as TVs Horrible Histories, ChuckleVision and a 2011 adaptation of Great Expectations.

There’s a lot going on at this phenomenal Elizabethan mansion built courtesy of architect, Robert Smythson.

Smythson was a stonemason at Longleat who rose to lead his own travelling band of stonemasons before founding a dynasty of architects.

His client, Bess of Hardwick, collected amazing textiles and was a rich and influential woman. She had Mary Queen of Scots in her personal custody for 15 years.

The beauty of Hardwick Hall is that you can visit at any time of year, and there is a convenient all-year-round campsite nearby, the Teversal Camping & Caravanning Club Campsite.

Gardeners and those who appreciate beautiful textiles are going to love it here. It has a precious collection of Elizabethan tapestries and exquisite embroidery. Bess of Hardwick’s Gideon Tapestries are huge scenes which would have taken weavers in Brussels 30-40 years to complete. She bought them for £326.6s in 1592. The Trust has restored two of them, which were rehung at Hardwick last summer. The challenge now is to raise money to restore and save three larger tapestries at an estimated cost of £180,000 each.

Outside, the Courtyard Gardens are what remains of the original Elizabethan garden. One of the finest herb gardens in Britain is here. Hardwick has an active team of volunteer gardeners supporting the Trust’s own gardeners to maintain the grounds and orchards.

Don’t miss seeing the ‘mushroom tree’ in the South Court, an unusually-shaped yew tree that was created when the top of the tree came off in a storm about 25 years ago. It has a smooth trunk, made that way by visitors going up to it and hugging it.

Best of all, if you see a plant you like at Hardwick, it’s worth asking at the Hardwick’s garden shop to see if they have a sample for sale – the gardeners propagate plants from the grounds and sell them on to the public.

One of the nicest ways to give the National Trust money has to be by booking a boat trip. The Steam Yacht Gondola is a Victorian screw-propelled vessel originally launched in 1859. She was converted into a houseboat in 1936 and an attempt to restore her in the late 1970s fell into financial difficulties until the local National Trust team stepped in and raised the cash to save the project.

She was rebuilt, and back in commission in summer 1980. She was initially coal fired but now runs on more efficient and less polluting bricks of compressed sawdust. More than 40,000 passengers a year go on cruises, all of which start from Coniston pier.

The standard cruise circles the lake along the western shore, taking you to Brantwood, the former home of John Ruskin – there are discount vouchers to Brantwood and the Ruskin Museum. It’s a trip between two lovely cafés: the Bluebird Café on Coniston pier, and Jumping Jenny’s Coffee House near Brantwood jetty.

The Trust runs the Victorian steam-powered yacht across Coniston Water as a profit-making enterprise to raise money towards the funding of other National Trust work, so National Trust members have to pay full fare. Online prices for half-lake tours are typically £11, and full-lake cruises £19. Sunday afternoon cream tea cruises are £56 for two people and a ‘be an engineer for the day’ experience costs £345.

The rugged north Cornish coast between Bude and Morwenstow is backed by cliffs, with wild surf, and wind-blasted campsites high above the sea.

It’s a place to visit armed with wetsuits, kites and bodyboards, though you’ll also find all of that on sale in Bude.

These National Trust surf ambassadors are involved in working groups, helping to protect the beaches they love, including the beach at Sandymouth.

The National Trust relies on hundreds of volunteers to maintain coastal footpaths and it owns hundreds of beach car parks too. This all came about because of fears in the 1960s that development would lead to the loss of Britain’s natural coastline. The Neptune Coastal Campaign has brought in £45m over four decades and the National Trust now owns more than 700 miles of coastline in England, Wales and Northern Ireland, but it costs £3000 a mile, per year, to look after it all.

Work now focuses on helping to combat the effects of rising sea levels, by such measures as buying land behind the retreating coastline, realigning tidal flow, and planting marram grass with its fibrous roots.