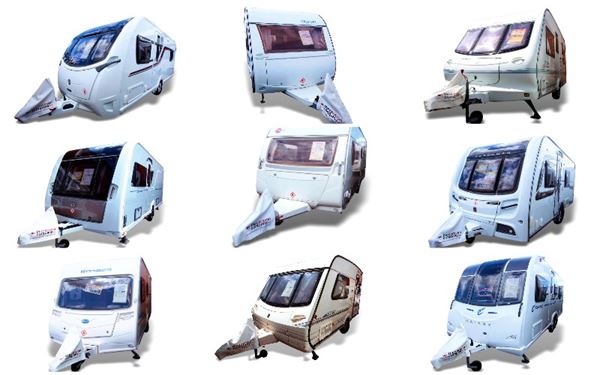 Six of our 10 chosen used caravans this month are under £8000, proving you don't have to spend a big sum to get into touring.

The caravans we selected here were available with The Caravan Company, which has branches in Dorset and Northamptonshire. At the time of writing, they have plenty of deals on 2018 models, some of which include £2,000 reductions. 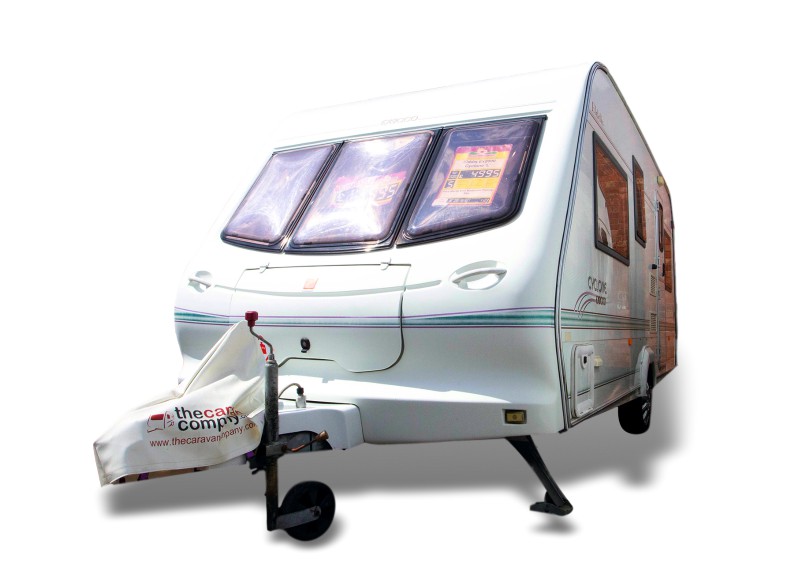 We came to the Caravan Company's Finedon branch expecting to find a great choice for first-time buyers, knowing that this branch specialises in getting people started in caravanning, even selling used accessories. We hadn't expected to find so much choice in the lower price brackets.

This family tourer was among the first we saw, with a practical layout. It has two L-shaped lounges, both making into double beds A bunk rises from the rear wall. The special feature of this caravan is a sliding, wooden door closes off the rear bedroom.

Whether that's for three little caravanners or whether mum and dad call this their bedroom and two offspring roll out their sleeping bags on the front settees, this caravan offers awesome versatility.

The shower and toilet share space (but then the majority caravans were like this once!) and the décor is redolent of a bygone age, with velvet curtains and patterned seating fabric, but forgive it that, for this caravan is a superb first-buy for a family.

Amazing! Four burners in almost pristine condition, an oven and grill that show minimal signs of use, an enamelled sink and drainer that are almost scratch-free and upholstery that still feels firm and has no marks. Only some silvering missing on the lower edge of one of the two washroom mirrors and some minor marks on the carpet give away this caravan's years. 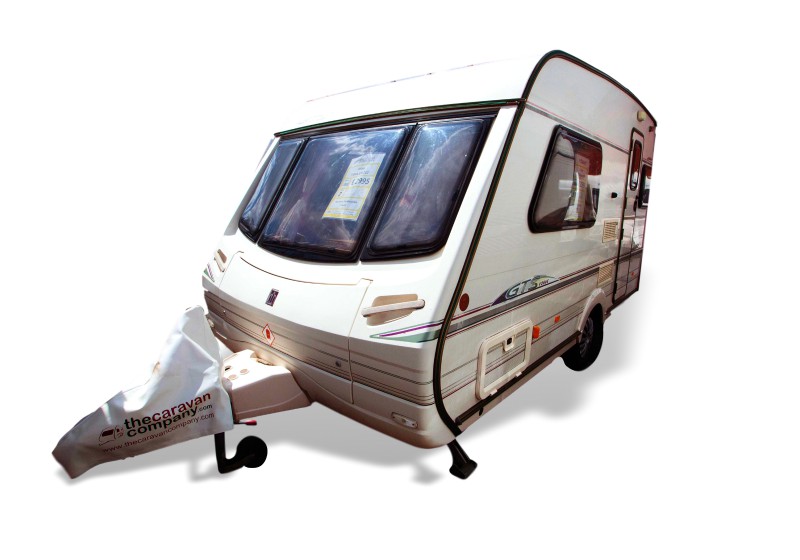 It's rare to find a caravan at £2999 and even more rare to find one in top condition for its year. This little Abbey was one of several two-berths under £5000 on the day of our visit.

We picked this one not just because it's the lowest priced caravan here but because it's so appealing. It's the traditional two-berth, end-kitchen layout, with beautiful pale woodwork.

It's hard to believe this caravan rolled out of the Swift factory (Abbey was a brand of the Swift Group) 18 years ago. Like the Elddis we picked of the same year, some silvering has disappeared from the lower edge of one of the mirrors in the washroom.

There are a few marks on the carpet by the entrance (there's an easy answer to that; buy a small rug!). The hob, oven, grill and sink and drainer are all in great order for the caravan's age. 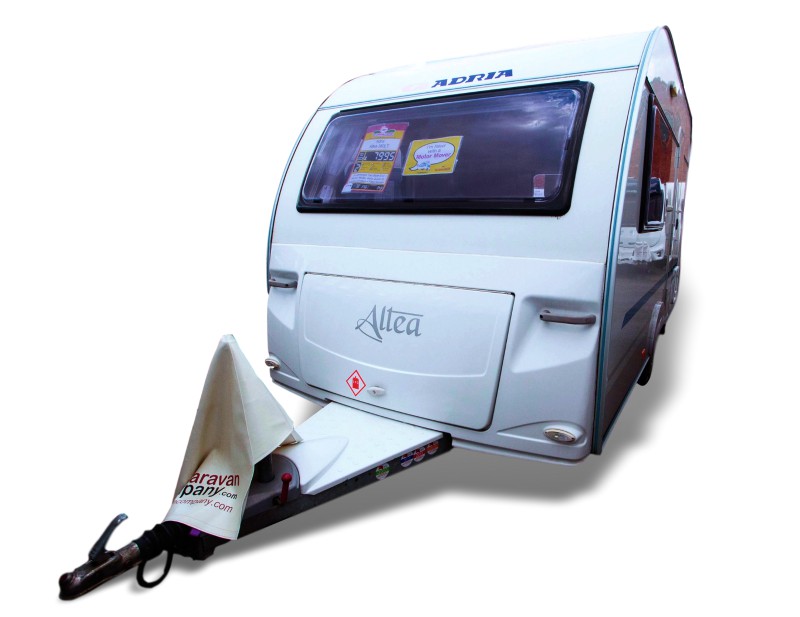 A different take on the two-berth, end-kitchen theme came from Slovenian maker Adria in 2009. This caravan has its kitchen towards the offside, with the little toilet-shower compartment on the nearside, beside the door.

It has a combined oven-grill, a three-burner hob and just about enough surface space for meal-making. Caravanning in miniature, you might say – until you measure the length of the settees; they're 2.06m long! One for tall buyers, then.

A whopping nine years younger than our first two choices, this caravan has a bright, modern aspect, with clean-lines lockers and up-to-date little glass-shaded spotlights at the front of the lounge. Like the Abbey we picked, this one is exceptionally light.

The upholstery has retained its firmness and the fabric is in pristine condition. The hob gleams almost like new and there is little evidence of use in the oven-grill. Only a small amount of tea staining in the sink reminds us that this is a nine-year-old caravan. Brilliant value! 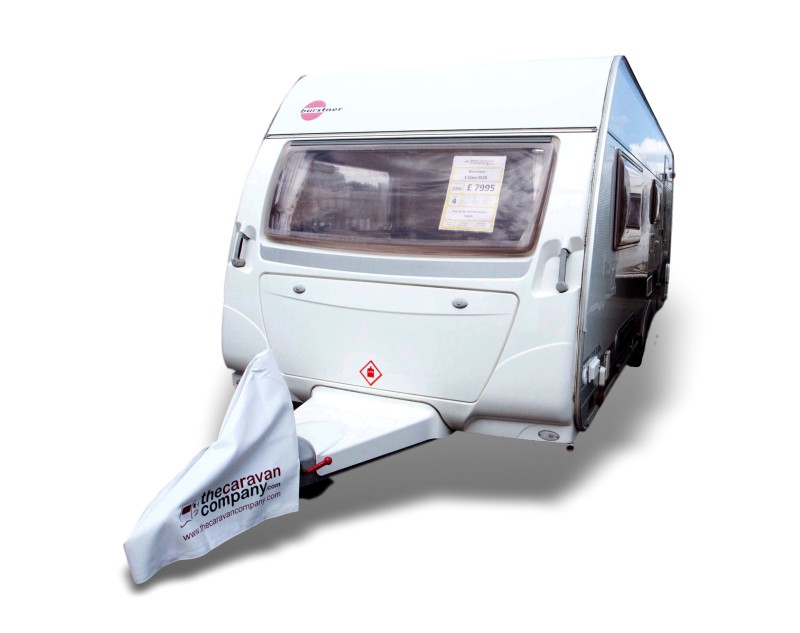 This German caravan has the same pale, plain-style cabinetry key to the appeal of the Adria we chose; this time, it's a family layout, with an offside dining area that converts to bunks.

This is a spacious tourer, with a deep windowsill, a dresser between the kitchen and the lounge and a full-width rear shower room containing a capacious wardrobe. It has a unique and impressive feature: the front of the fridge is a curved cabinet with four slim shelves!

There's a large drinks cabinet fitted for bottles and stemmed glasses. The door has an opening window! And there's an upholstered panel by the door with two double coat hooks set into it. This is a refined, quality caravan with many nice features.

The four-burner hob, oven and grill show no signs of use. There are some fine scratches in the base of the sink. And the carpet has a few small marks which we think would wash away. That's all. 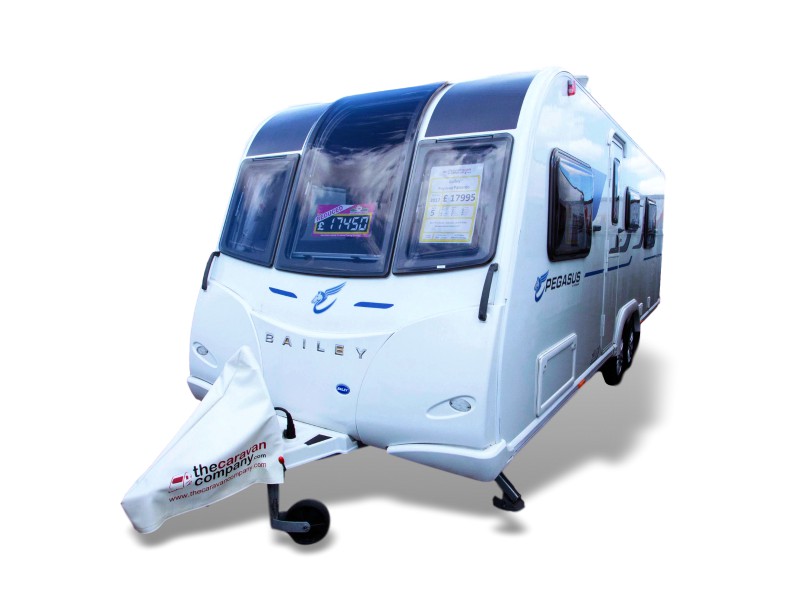 As well as many caravans in first-time-buy price territory, we discovered a good selection at Finedon in the nearly-new bracket.

As one example, we chose this awesomely-designed five-berth, on twin-axles (so it's lengthy and extra-stable to tow) and with bunks plus a dining area forward of the full-width rear shower room.

If you aspire to buying new but would rather not stretch to the £21,599 price of a new Palermo, we've probably found your dream caravan!

There's a lot to like. The settees have high. Curved backrests of a design unique to Pegasus. The kitchen surface is truly enormous. The dresser opposite is even bigger. Kitchen storage capacity is gargantuan, with two cupboards, two large drawers and a drop-down cabinet beneath them, a cabinet containing four shelves and a hidden drawer, plus five top lockers. It also has a 180-litre fridge-freezer.

This caravan is nearly indistinguishable from new. Close inspection revealed that the chopping board sink cover had been used (well, it's design to be!), there's the inevitable heat burnishing on the base of the hotplate and a little evidence of use in the oven.

Considering this caravan costs £4179 less than a new Palermo, it's brilliant value; £4179 pays for many caravan holidays! 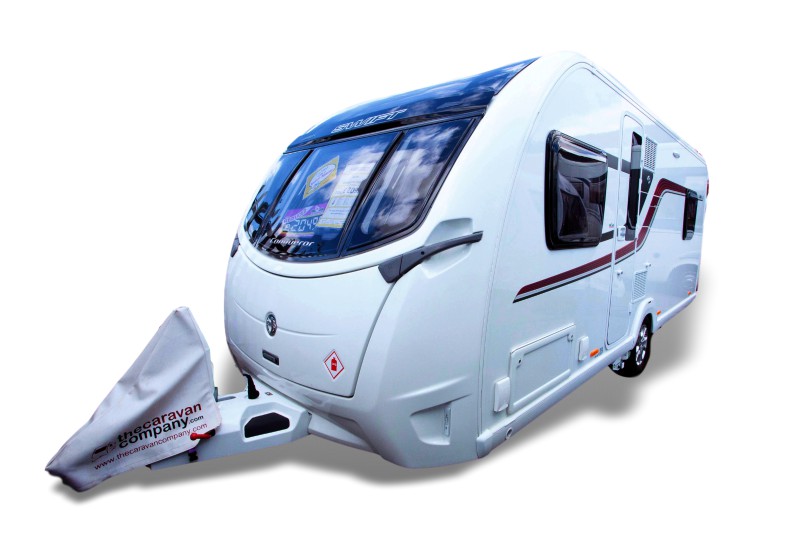 Also in the higher price range here at Finedon, this Conqueror caught our eyes, at £6440 less than a new Conqueror 560 (£26,935). This is a chance to get the in-vogue rear bedroom, central shower room layout proving a good seller among new caravans, without having to stretch to new prices.

The 560 has a tall, slimline fridge-freezer opposite the kitchen and ample storage in a double cabinet with a huge drawer above, plus cupboards above and beneath the fridge-freezer.

The bedroom is cosy and luxurious, with a suite of wardrobes and cabinets of domestic style. The shower-washroom spans the whole width of the caravan forward of the bedroom, with the shower on the nearside, the washbasin in the centre and the toilet on the offside.

This luxuriously-appointed caravan, with ultra- stylish décor and Alde heating, has no sign of use in the oven or grill. Only heat burnish on the hotplate evidences cooking. It's in lovely condition; a great buy waiting for someone! 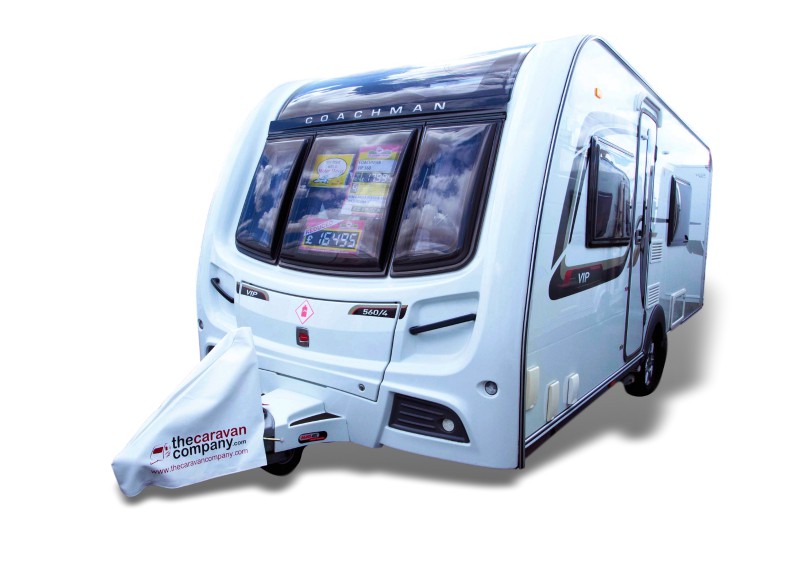 Fixed side double beds are now rare among new caravans, yet there is nonetheless a demand for them, so they're much sought-after on the used market. Coachman, like most manufacturers, has discontinued this layout.

The shower room, at the rear, is one of the most spacious you'll find, and with a deep, Belfast-style washbasin. There's plenty of kitchen capacity and first-rate storage under the bed, with no mechanism for expanding and retracting the length to get in the way. That's one way in which side bed layouts score over island beds.

The oven has not been used. The grill probably hasn't been used. The hotplate has the usual heat-evidence around the base (that happens the first time it is used) and there are some fine scratches in the sink, In other words, this caravan is pretty near immaculate. 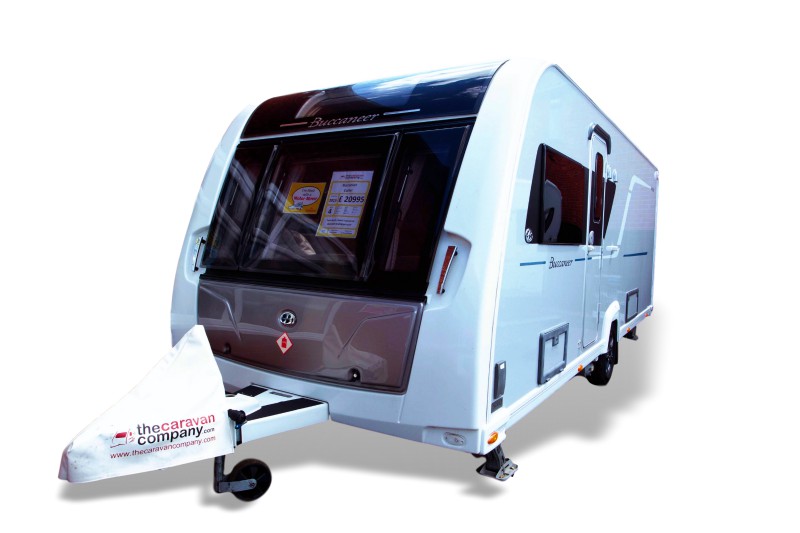 A caravan which levels itself at the press of a handset button has got to be regarded as at the pinnacle of equipment status. Buccaneers are fitted with E&P's Levelsystem, which levels the caravan with a mighty six-point jacking system.

They have Alde heating and onboard water tanks; in the Cutter, it's under the bed).

The Cutter has a transverse island bed and a rear shower room. This model is no longer made; when it was new, it cost £28,994, so our find at the Caravan Company represents a saving of £7999.

The glossy rock-effect sink gleams as new, so does the hob, grill and oven. This top-spec caravan looks and feels just like new. A brilliant choice for someone! 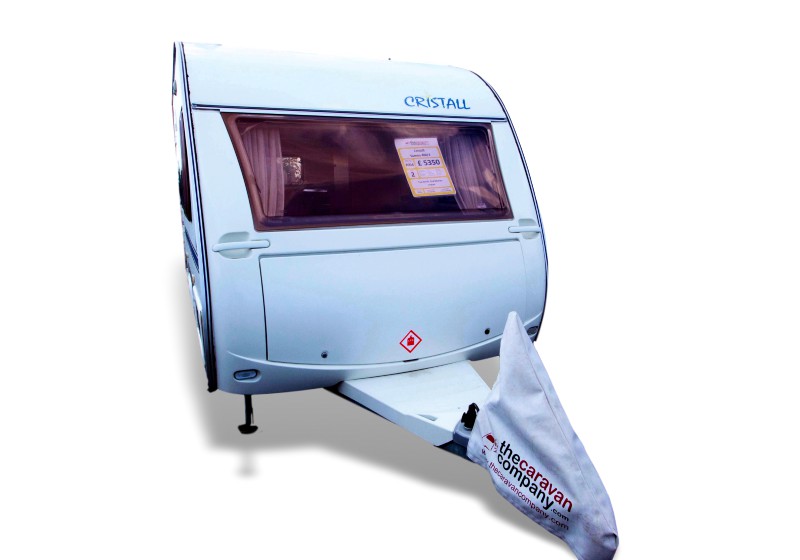 From super-luxury to simple French modernity, we found this amazingly rare caravan with a luxuriously large U-shaped lounge and spacious, L-shaped kitchen.

Cristall caravans were imported for only a few years, This one has a table much larger than you'll find in British-made tourers; it's substantial, and designed to stay up, even when you tow. Cooking equipment is a combined oven-grill and three-burner hob.

There's significant storage space, especially in the kitchen. Style and refinements aren't lacking, with two spotlights that run on a track over the hob-sink area, plus curtain panels and voiles, in typical continental style.

Except for inevitable heat burnish on the pan trivets and a few scratches on the glass hob and sink covers, this caravan is immaculate. Would we buy it? Definitely. (Only caravans which would tempt us to part with our own money make it to these selections.) 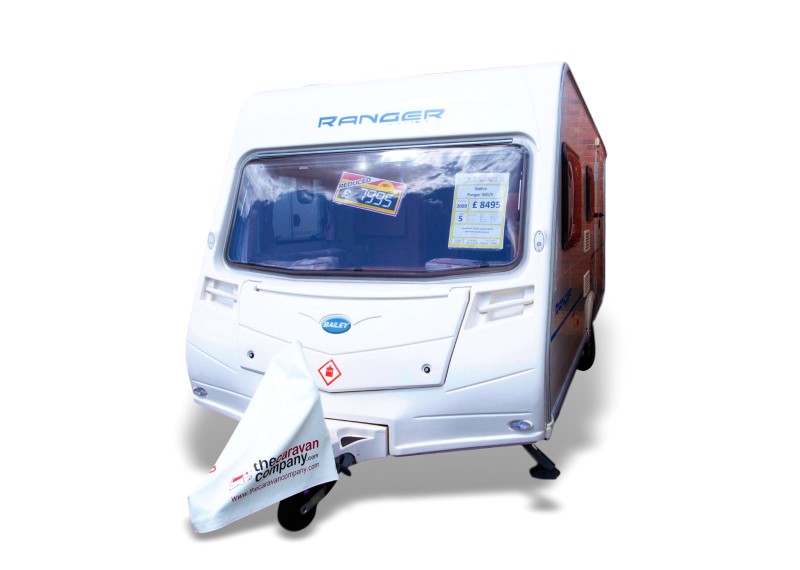 This caravan has a lot in common with the Elddis Cyclone that caught our eyes at the start of our day at Finedon, Importantly, this Bailey Ranger demonstrates a family can get into caravanning for a relatively modest outlay.

Also, like the Cyclone, this model is of a layout not now found in new ranges. Yet it's a brilliant way of accommodating a family, with a rear lounge that converts into a double bed with a bunk above – and a solid wooden door to provide a much more effective light and sound barrier than a pleated fabric partition.

Apart from a minor scuff mark on the hob and scratches in the base of the sink, this caravan is in gorgeous condition for its year. Another definite for our theoretical personal shopping list!