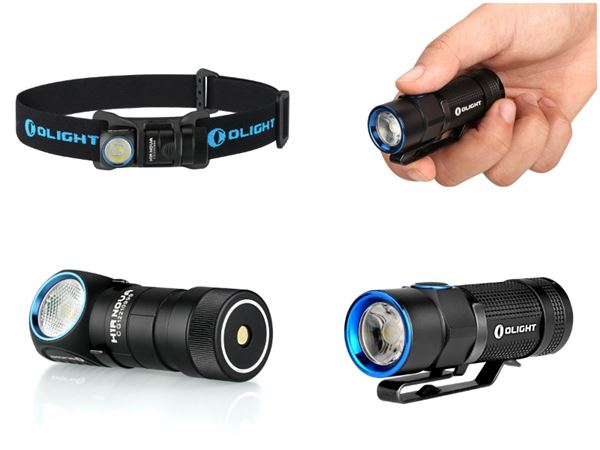 Olight is a new LED flashlights brand in the UK with some interesting products. We were sceptical about the products before they arrived, to be honest. And concerned with their quality. But, we wanted to see them to assess their usefulness for caravanners, campers and outdoors people.

LED flashlights are 'ten-a-penny' with some big brands dominating the market. There is a ton of budget LED torches available on eBay or Amazon. LED lights are more efficient than their tungsten-based bulb predecessors. LED bulbs don't waste energy through heat loss, which makes the batteries last longer.

We asked for LED torches which we could use for many outdoor purposes. That meant the LED torches would need to be light, compact, and rechargeable.

The team did not want to have to carry around spare batteries. We need to plug them into the USB sockets in a caravan to recharge

We need not have worried. The company sent us an Olight H1R Nova head torch, and an S1R Baton torch, both USB rechargeable, to try.

Signs of Quality from Olight

Although you throw the packaging away, its quality is a sign of what's coming out of the box. The Olight packaging is good. It looks smart and it's robust.

Each of the LED lights come with its own brown, branded carry-bag, which you seal at its top with a draw cord. On the side the bag of the H1R Nova is a long hoop which you use to remove the belt clip, which comes attached to the torch.

Both torches are black with blue trim, and made of aluminium. They feel well-made, and look well-made. Unscrew the base of each flashlight and you can remove the lithium battery.

There's a rubber o-ring on the body of the torch to prevent liquids and dirt getting in, too. That means both LED flashlights should take the British weather in their stride.

The Olight S1R and H1R Nova LED torches are small at 6.5cm and 6cm long, . That's small enough to fit in a pocket without you noticing them. That could be a problem they are so small. But, each comes with a belt clip so you can attach to your person, or to a strap on your backpack, for example. 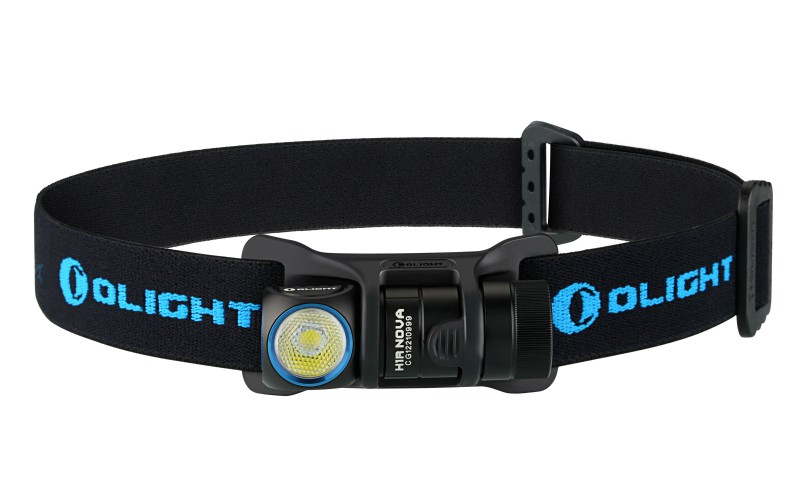 The Olight H1R Nova is a head torch. It's LED bulb sits at a right angle to the body, rather than pointing out from the end, like the S1R Baton. That means you can rotate it up or down in its rubber mounting according to where you need its beam to point.

The H1R Nova has two grooves in its body which are for two hoops on its mounting to hold it in place. One of the hoops has a small grip on it to make it easier to pull over the flashlight when you mount or dismount it. The hoops are firm enough to prevent the torch bouncing around. But, not so firm you can't adjust it.

The H1R nova has an elasticated, adjustable headband. Its length is generous enough to allow you to put it around a helmet (including a cycling or climbing helmet). Yet, it is adjustable enough to put it straight onto your head too. 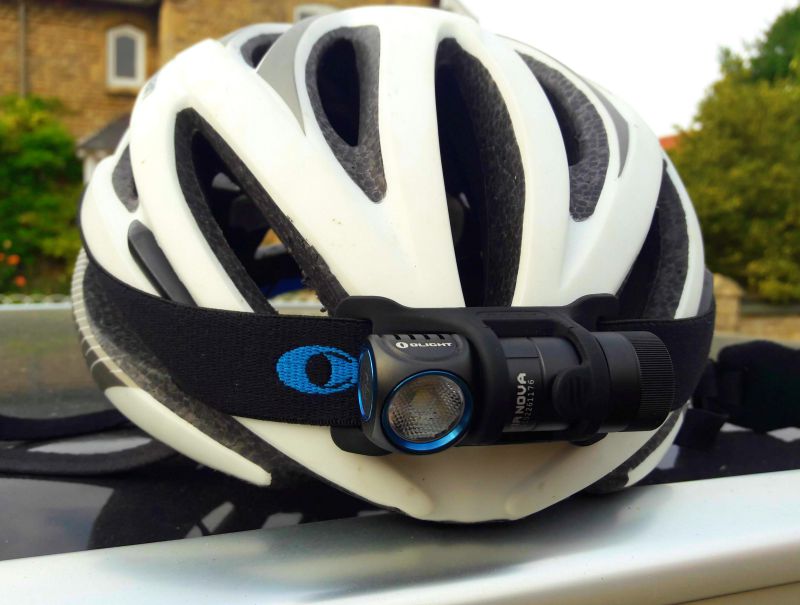 The Olight S1R Baton is much more of a multi-use LED torch. It's one that you'll keep in your pocket most of the time when you are on holiday. It is small enough, as mentioned, to fit into a pocket, or clip onto your belt or backpack without getting in the way.

The S1R Baton and H1R Nova also have an optional bicycle mount so you can attach to the handlebars on your bike. That makes this LED torch a good one to use for different outdoor activities.

Don't limit it to using it in the campsite. Take it on your bike rides to use in the day to be visible, and at night to see. Take it on your walks to use in case you are not back in the daylight. Take it kayaking for the same reason, and don't worry about soaking it. They have an IPX8 waterproof grade, which means you can immerse them in up to 30 metres of water without leaks. Clip it to the shoulder straps for quick access for map reading in poor light.

It's a handy torch to carry with you on your outdoor holidays throughout the year.

You switch on the Olight S1R and H1R Nova LED lights using the rubber buttons on the top or side. Both have three brightness settings from low to intense. To switch the torches on, you press their buttons once. Press and hold the button when its on and the brightness changes from a lower to a higher intensity.

The brightness varies from 2 to 600 lumens. Not the brightest you can get on the market, but bright enough for good visibility for being outdoors.

Of course, keep the torches at their brightest setting (600 lumens) and you get about an hour and 20 minutes of light. Olight says you will get 20 hours of light from them at 15 lumens. We've yet to test that claim.

Olight has cool-white and neutral-white coloured versions of the H1R Nova head torch. 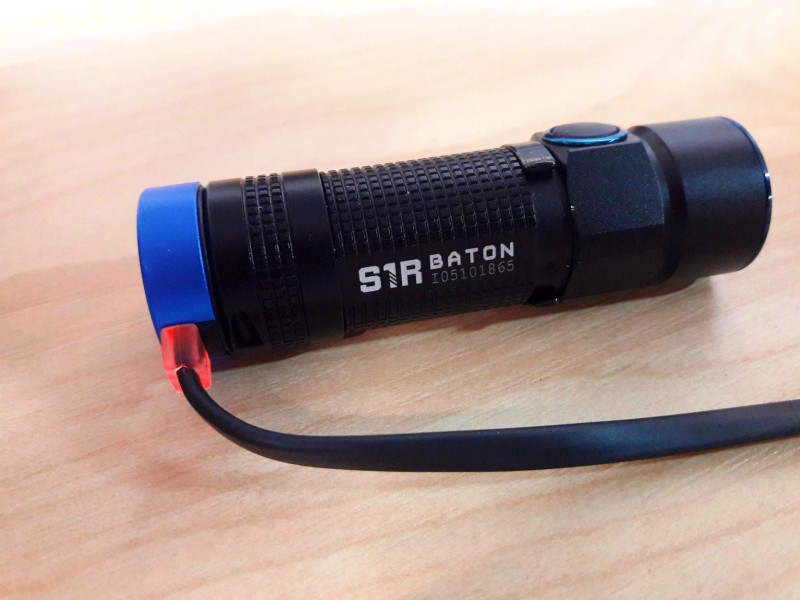 The LED is red when charging

Charging these two Olight flashlights is by USB. Each torch comes with a special, blue magnetic mount. This attaches to the base at one end and into a USB socket at the other. At the base end, there is an LED which turns red while it's charging, and green red when it's complete.

You can plug these Olight LED torches into your computer to charge. You could use a power bank to charge them. Or use a solar rechargeable power bank (e.g. a Waka Waka Power+) to charge the lights, if you want to use renewable energy. 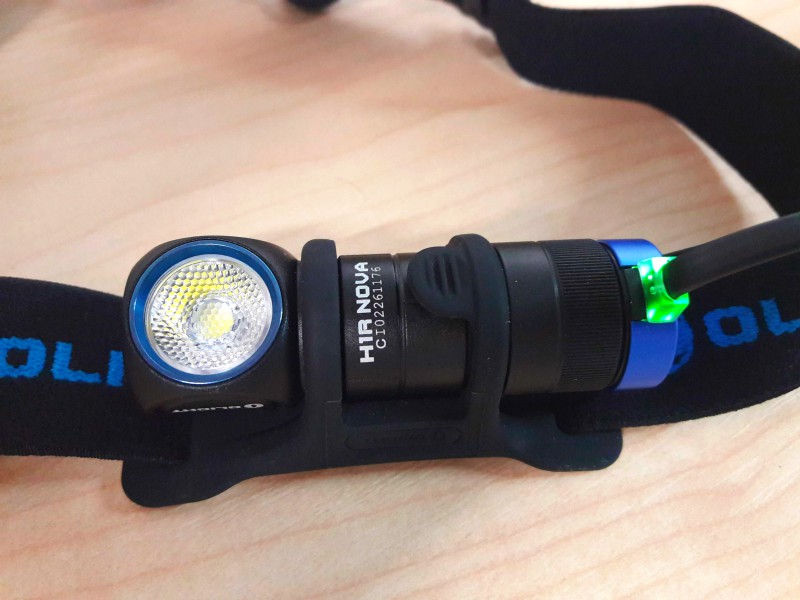 How much do the Olight H1R Nova and S1R Baton cost?

These Olight torches are at the high end of pricing, but for a reason. They are high quality. They will take a battering. And provide you with good service for longer than cheaper alternatives. With a 5-year warranty, Olight is confident in their torches.

If you are quick, Olight has a launch promotion with up to 40% now. Prices will go back to RRP soon.

Click here to find out more about the Olight Torches

The Olight LED flashlights are good. They are robust and provide good light at varying brightness. Some people like big flashlights. But, the Olight torches are perfect for any caravanners who want something versatile enough for them to use on site and when out and about.

Being small, they are light too. That means you can carry them around without noticing them in your pocket or backpack. They won't take up much space in a drawer in your caravan and their low weight will skim grams off your payload (if that's a concern!).

Although some may baulk at their price, you get what you pay for with these Olight torches. They are beautifully made and should last you a long time, give you light when you need it, and for a long time without a charge.

We'll be using the Olight S1R Baton and H1R Nova when out and about for Caravan Magazine!