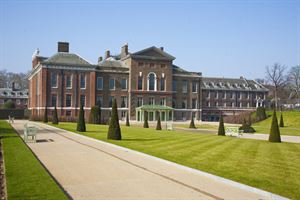 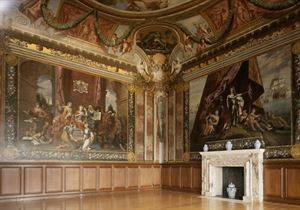 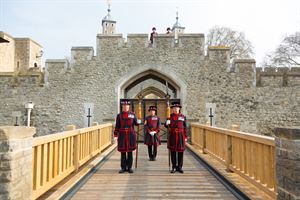 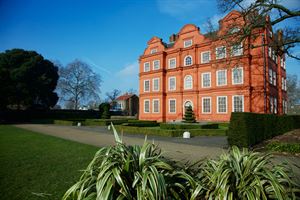 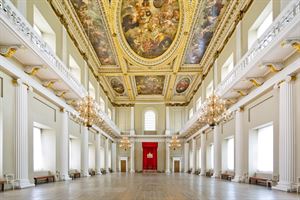 Who doesn’t love a good palace? There’s nothing quite like exploring the stories and secrets of some of Britain’s most iconic buildings looked after by this National Treasurer.

Some of the most defining moments in our history have happened within their ornate walls. They have been home to our monarchs, and Kensington Palace is still home to members of the Royal Family, including Wills and Kate.

Despite being officially owned by the Queen, none of these palaces have been used for royal court purposes since the 18th century, and are now looked after by Historic Royal Palaces, which relies on hiring them out and visitor income. If that is what it takes to maintain these mesmerising buildings for us all to enjoy, it’s money well spent.

Disarmingly, it doesn’t look that old from the outside and when you enter, it’s all gastropub creams and greys to give a modern feel. Then you walk up the Hogwarts-like King’s Staircase... and about 400 years back in time.

It started life in 1605 as a simple two-storey Jacobean mansion. William III and Mary II chose it as a villagey place to live and asked Sir Christopher Wren to expand it.

There are seemingly hundreds of rooms, like the Queen’s Gallery, built for Mary to enjoy ‘reading, walking and needlework’. George II and Queen Caroline used to have Handel round to teach their kids music (as one does) in the Cupola Room.

Queen Victoria was brought up here and it was home to Princess Diana from her marriage to Prince Charles until her death in 1997.

Directly outside the Palace anyone can enjoy the 270-acre majesty of Kensington Gardens. The Princess of Wales Memorial Playground is a brilliant place where children can run riot. It’s busy at weekends (20 in, 20 out policy), but it’s free.

The Tower of London

It’s massive. William the Conqueror started building it in the 11th century and it’s essentially been added to by various monarchs over time like some sort of richly significant housing estate, making it an almost endless series of nooks, crannies, rooms and vaults that will have your jaw making contact with the floor at regular intervals.

Spending time mooching around the Tower is like peeling back a huge, historical onion that continually surprises and shocks in equal measure. There are plenty of guides in Beefeater costumes doing tours, and the whole place is a photographers’ paradise – you can see loads of old swords and cannons, instruments of torture like ‘The Rack’, and even genuine suits of armour worn by the likes of Henry VIII.

The only place your camera is forbidden is the bit where the Crown Jewels are, which is a shame because they are truly astonishing. It’s not just diamond-encrusted crowns – the lavish and ornate gold plates, goblets and bowls are almost bewilderingly stunning. There’s a gold punch bowl there that can hold 144 bottles of wine. You definitely need one of those the next time you’re throwing a dinner party.

There’s one particular famous royal that comes to mind when you utter the name of Hampton Court Palace: the binge-eating, wife-beheader-in-chief himself, Mr King Henry VIII. And, as you’d expect from such a colourful monarch, the palace has a history to match.

Located near Twickenham and Richmond, Hampton Court Palace was originally knocked up in 1514 for Cardinal Thomas Wolsey, who at the time was a powerful figure within the Church and State and a big favourite of Henry VIII.

Unfortunately, his relationship with the king went pear-shaped when Henry ordered him to get his marriage to Catherine of Aragon annulled because she’d had the cheek not to produce a male heir. Wolsey failed, so Henry promptly looked at Hampton Court Palace and thought, “I’ll have that, thanks.”

Henry made it his principal gaff and duly spent £62,000 over the next 10 years renovating it – the equivalent of £18 million today. Given that his court consisted of about 1000 people, one of the first things he did was get the builders to make absolutely massive kitchens. They were designed to feed at least 600 people twice a day, and their sheer size is quite staggering. The cookery demonstrations in them are truly fantastic.

Banqueting House is the last surviving part of the Palace of Whitehall, destroyed by a huge fire in 1698. Luckily, Banqueting House, designed by the ridiculously talented architect, Inigo Jones, remained. It’s worth visiting for two reasons: it’s got the most impressive ceiling this side of the Sistine Chapel, and it’s where Charles I was executed. A bit out of order given that it was Charles who commissioned the ceiling in the first place, but there’s no accounting for people’s behaviour when there’s a civil war brewing.

You walk in, watch a brief video and then it’s up the stairs to the main hall. But seriously, what a hall. Enter, clutching your mobile phone-sized audio guide, and there are lots of seats dotted around the edges and some beanbags in the middle. I opt for the latter, a good shout because you tend to spend lots of time looking up at the ceiling.

In 17th century London, Banqueting House was the place for masques (a cross between a ball and a play) and where artists, playwrights and dandies went to be seen. Charles I was obsessed with the arts so, when renowned painter Peter Paul Rubens came to London, he commissioned him to do a new ceiling, for which he was paid £3000 – a fortune in 1636.

Of all the Historic Royal Palaces, Kew Palace is perhaps the ‘least palacey’. In comparison to the Tower of London and Hampton Court it looks like a modest post-war semi, and not the kind of place you expect ostentatious British monarchs to flounce around in.

George II was the first king to live here, but Kew Palace is particularly famous for being the home of ‘Mad’ King George III in the 18th and early 19th centuries. Well, ‘home’ might be putting it politely. He was more or less imprisoned here due to his mental illness – Kew’s comparatively rural location meant that the full extent of his condition could be hidden from his subjects. It was here that an array of treatments and cures were inflicted upon him that now seem equally mad – among them straitjackets and baths.

In actual fact, the latter is of great significance at Kew, because a few years ago the tin bath that George III used was rediscovered, stuffed away in an old chimney opening. George used to have his baths amidst the clatter of the kitchen, and you can see it positioned here when you visit. The first thing you think when you look at the bath is, “Doesn’t look very comfy, does it?” Admittedly, it was in the days when you couldn’t get a nice big one from B&Q, but still. No wonder the poor bloke was a bit loopy.

This is a fascinating place and definitely worthy of your time. It’s not necessarily a full day’s worth of viewing like the Tower of London but, given that it’s less than 10 miles away from Hampton Court in West London, it’s not a bad idea to tie the two together in one day.