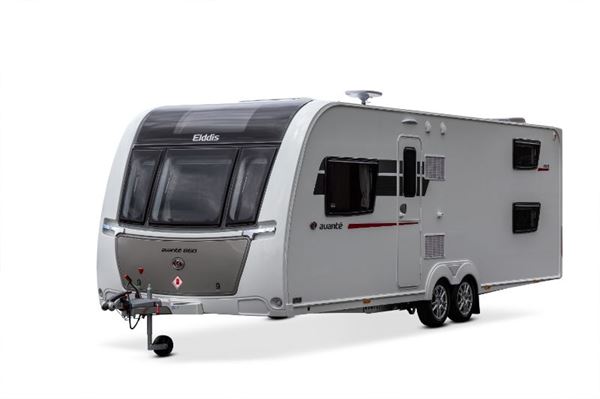 The new Elddis Avanté 868 is an eight-foot-wide family model with a double bed and bunks in a rear bedroom.

This is the first time a layout of this type has been produced by a British manufacturer. Elddis caravans are made in County Durham by the Erwin Hymer Group, which now produces 11 different eight-foot-wide caravan models in Britain.

The 868 is a six-berth caravan with both a fixed double bed and two bunk pods in a rear bedroom which has a solid sliding door. The shower and washing arrangements are forward of the bedroom, with the shower on the nearside and the toilet and washbasin located on the offside. 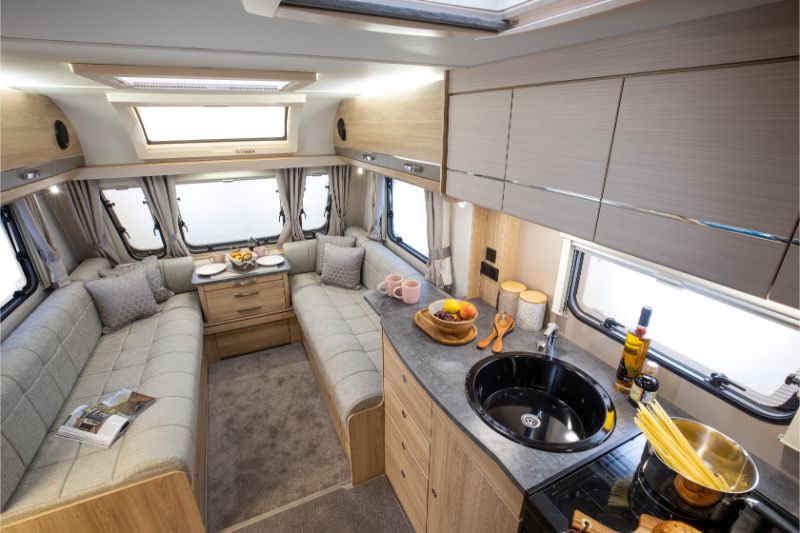 The hinged door forward of this compartment closes across the caravan to separate the entire bedroom and washing area from the kitchen and lounge. This creates a section of privacy and an en-suite feel to the interior.

The bedroom layout is one which has only been made possible by the extra width of the caravan. The 868, at 2.45m wide, is 19cm wider than standard-width Avanté caravans.

In the well-equipped kitchen, this model has been fitted with the Dometic 145-litre fridge with removable freezer compartment. There is also an oven and grill, dual fuel hob and microwave.

The attractive and appealing lounge is long enough to make single beds or can be converted to a double bed. 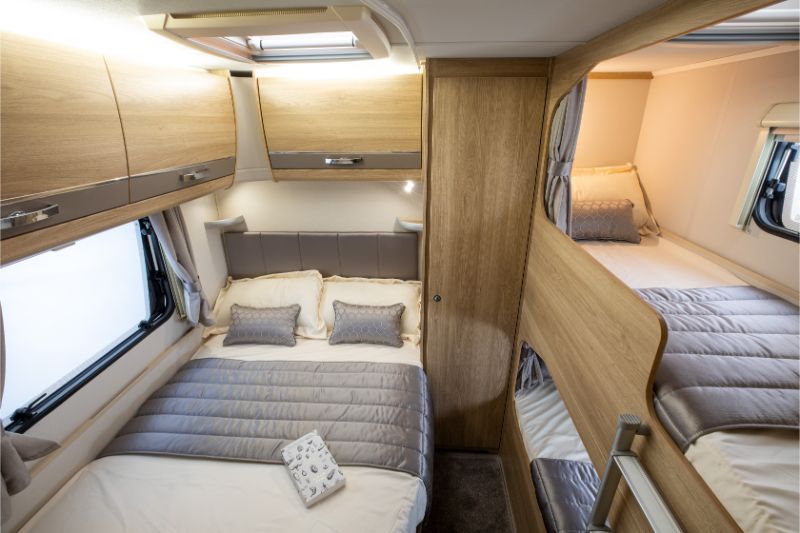 Elddis seating fabric has a subtle herringbone pattern and the four cushions have a pastel mauve-fawn hexagonal pattern outlined in paler fawn.

A new Whale heating system has arrived in the Avanté ranges. This is the Whale CompleteHeat system which, like the similar system which has been fitted to the Erwin Hymer Group’s Xplore range for some years, is mounted under the floor.

The new system for 2020, which has taken three years to develop, is lighter than the original Whale blown-air system; the unit weighs 8.7kg compared with 11kg for the standard 4kW unit.

The new system has three electric settings, low, medium and high. The low setting is 0.75kW; medium is 1.5kW and high is 3kW. The system can be used on a combination of electricity and gas; that option delivers 5.45kW. When the gas-electricity combination is used, warm-up time is increased by 40%; that figure is derived from Grade III testing, in which caravans are taken from -15 degrees to +20 degrees celsius.

Avanté also has Whale’s water heater, which is mounted under the floor.

This new layout, with a bedroom designed to sleep four, in a double bed and two bunks, is a revolution in British family caravan bedroom layouts.

This layout wouldn’t be possible in a standard-width caravan; the extra width here means that there is not only space for bunks in addition to a double bed but also a reasonable-sized corridor between them, so there’s no compromise on floor space and plenty of room to move about freely.

This is a layout which will appeal to families with very young children, in particular. The Avanté is certainly a caravan that you’ll enjoy for many years to come, wherever you choose to take it!

The 520 is one of three new layouts unveiled for 2020 across several ranges made by the Erwin Hymer Group in County Durham. 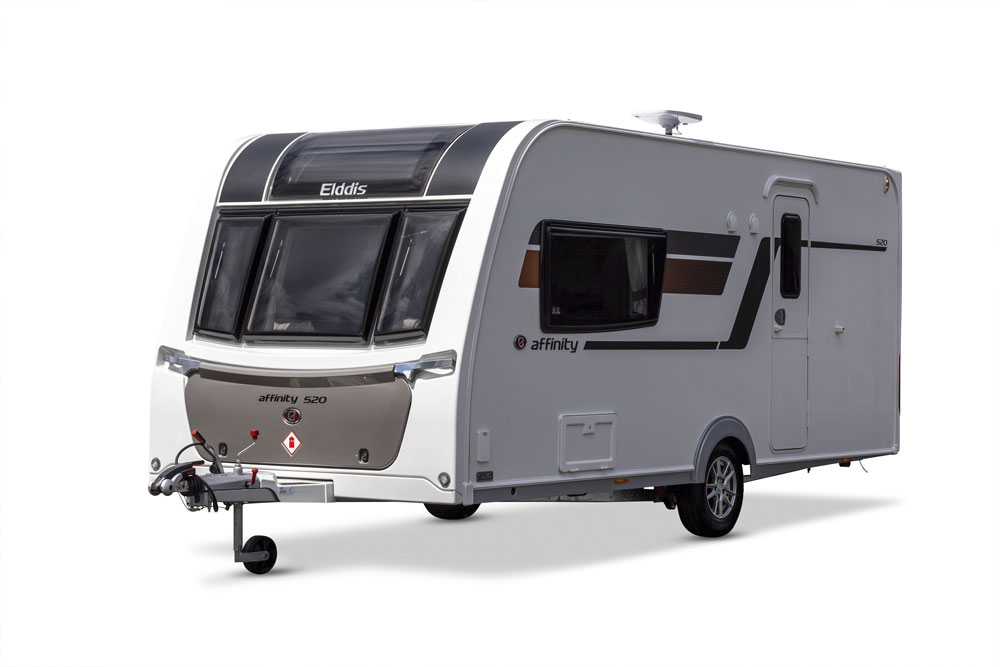 But this two-berth is different from the norm. It has the luxury of an exceptionally large shower room and enormous wardrobe accommodation within the shower room. This shower-dressing room is of an unusual layout, with the shower positioned in the offside corner, the toilet beside it and the basin in the centre at the rear. 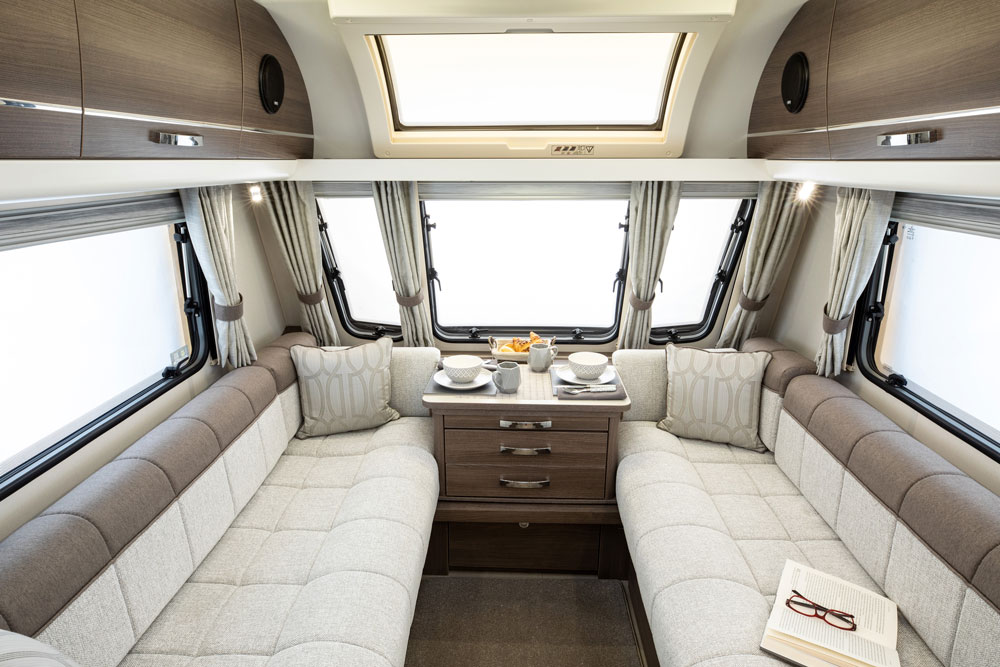 A suite of wardrobes, drawers and shelves occupies the whole wall on the nearside. One of the two wardrobes has a double hanging space, with one rail above another. The table is stored in this sector. 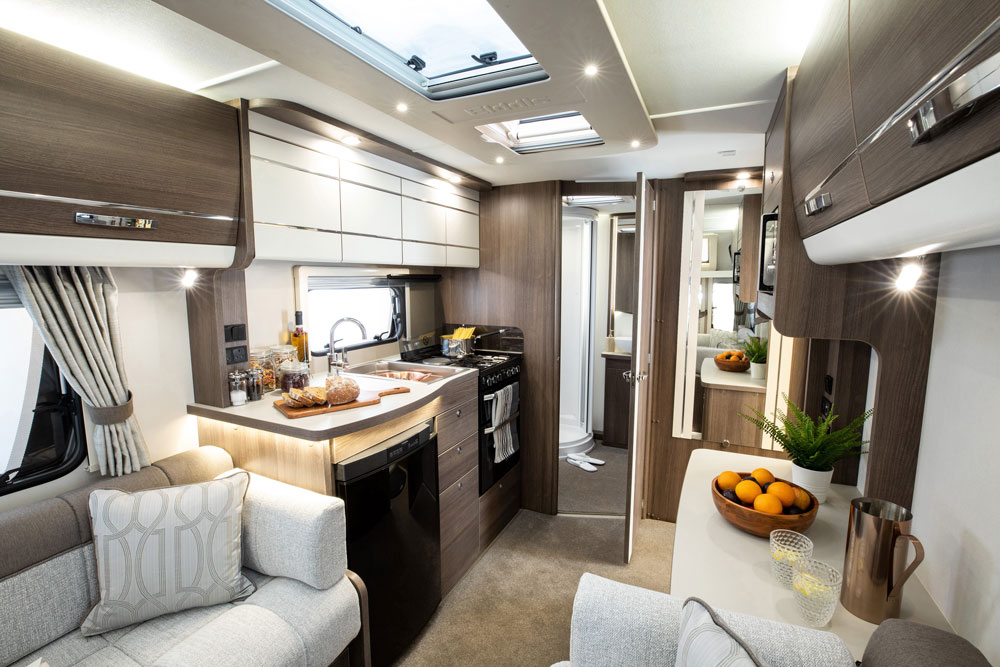 The 520’s other notable features include a long, slender skylight stretching the whole length of the lounge.

When Elddis invented the new-for-2020 Avanté 454 it had in mind couples who wanted both a compact caravan and a double bed. Both of those boxes are firmly ticked – and the 454 gives buyers something else that’s a rarity in any caravan, let alone a relatively small one. That’s a television wall in the lounge, on the nearside, with connections conveniently positioned in the corner. 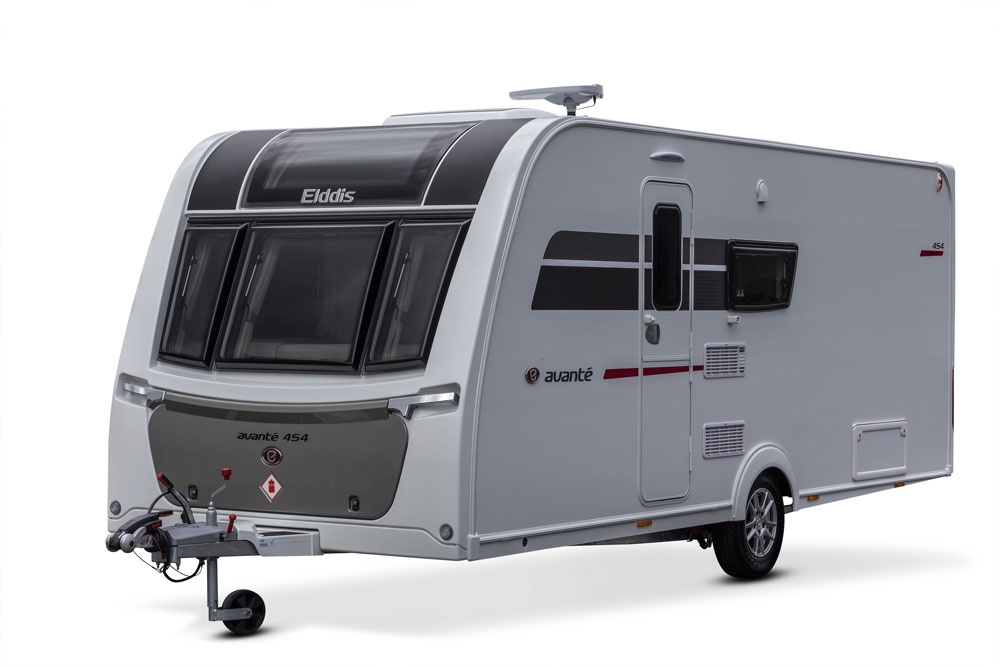 The shower shares a compartment with the toilet – that’s a departure from trend amid a market in which nearly all except very small caravans have separate showers.

But there’s a good reason why the Avanté 454 has the washbasin, toilet and shower all together in a compartment amidships opposite the kitchen – it’s to save the space that enabled the designers to create the delightfully cosy bedroom that is sure to woo buyers. 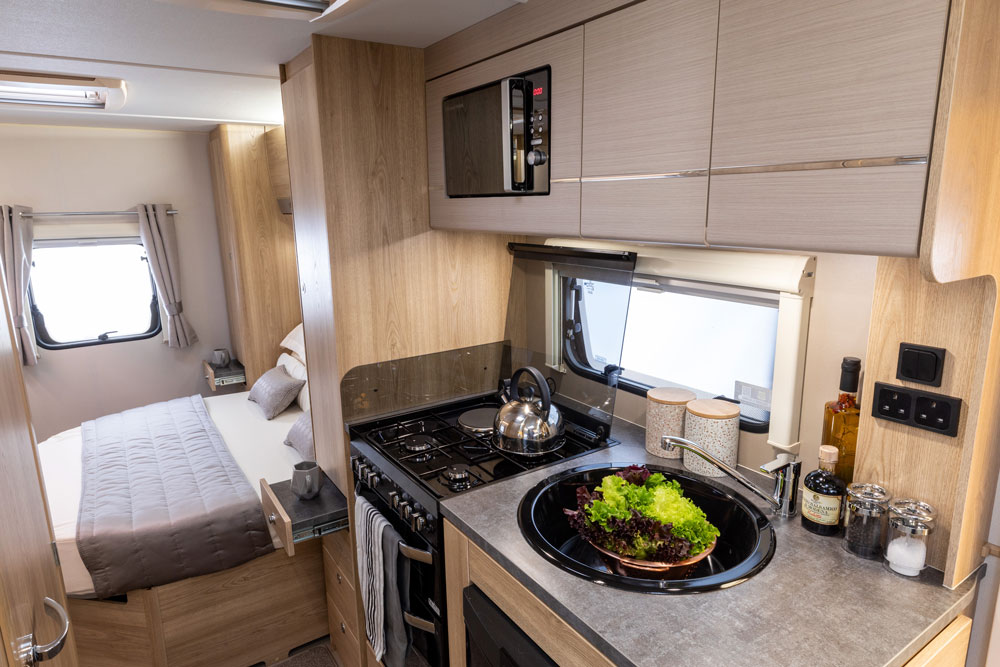 So, what’s so special about this bedroom? A transverse island bed, two triangular dressing tables and wardrobes of equal sizes on each side of the bed, with four drawers beneath – this is the sort of bedroom you’d find in a caravan of much longer length.

This content featured in The Essential Guide to 2020 Caravans, brought to you by the publishers of Caravan magazine. To buy a digital edition of the guide with the November issue of Caravan, click here.