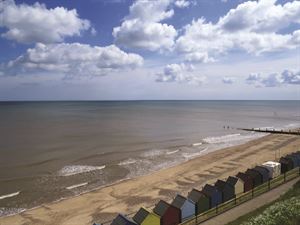 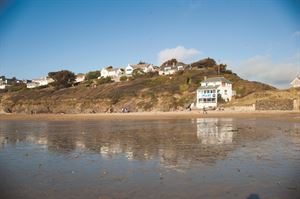 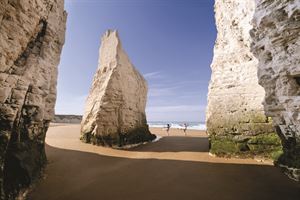 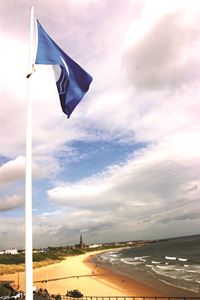 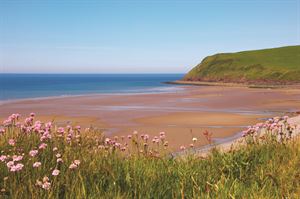 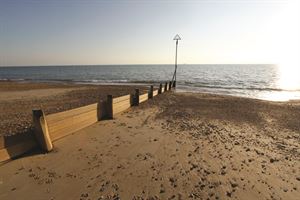 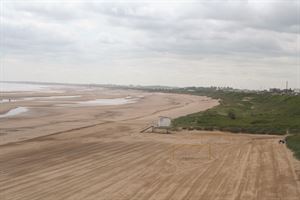 We have more than our fair share of great beaches in the UK. What’s more, 56 of them have been given the much sought-after Blue Flag award – a globally recognised symbol which tells people that the beach has unparalleled cleanliness and water quality.

So before you take a look at the other National Treasurers in our series, here’s Caravan magazine's pick of the hidden gems on the great British coast…

If you’re looking for a Blue Flag beach in Kent, you’ve come to the right place. That’s because the top-right corner of the county has eight of them – more than anywhere else in Britain.

Beaches like Margate are not only clean but stuffed full of chippies and arcades nearby. So, for a stunning stretch of sand that’s a bit quieter, Botany Bay is the place to go.

Situated at Kent’s north-east tip, it’s been a Blue Flag beach for five years in a row, and you can see why.

Framed by white cliffs and populated with intriguing chalk stacks and lovely, soft sand, Botany Bay has no promenade with amusements and multiple pubs to choose from. Instead, it’s simply a beautiful place to have a day out at the seaside.

There’s a small kiosk on the beach, clean toilets, somewhere to hire deckchairs, loads of rock pools and no phone signal – bliss. All you need is a packed lunch and some drinks and you’ll have one of the cheapest days out you could wish for.

If you don’t fancy sandy sandwiches you could nip up the hill to the Botany Bay Hotel, which does lovely food (the home-cooked ham sandwich on doorstep bread was worth every penny of the £4.95 asking price).

The only thing about the beach – as you might expect from somewhere so quiet and secluded – is that parking can be tricky. Best to get there early.

With a huge sandy beach tucked in the bay of a quaint town, it’s no wonder that Polzeath is a favourite for the likes of David Cameron and Princes William and Harry.

Set in a small alcove of North Cornwall, just across the bay from Padstow, Polzeath offers a cosy selection of all the amenities you need for a day at the seaside: a few shops, some pubs and even a brilliant food shack called Mr Surfy, selling amazing pancakes and bacon rolls.

Another great place for a drink and some food by the beach is the Surfside café – the cooked breakfasts are fantastic and if you come back later, you can enjoy a cheeky tipple while watching north Cornwall’s famous sunsets.

The beach is so massive that it doubles up as a car park: there are 260 spaces and it’ll cost you a fiver to leave your car there for the day. But once you’re on the beach, it’s bliss. Such is its size that families share it happily with the legions of surfers who make Polzeath one of the country’s best surfing destinations – as such, expect to hear people addressing each other as ‘dude’ while describing things as ‘gnarly’.

The beach is just the start of what the area offers, with stunning coastal walks allowing you to meander along craggy paths and take in the stunning views out to the Atlantic. And just nine miles north you’ll also find Tintagel Castle.

Just south of the hustle and bustle of Bridlington lies Wilsthorpe Beach, a huge stretch of beautiful sand that literally goes on for miles.

When the tide is out it feels as if there’s enough room for the entire population of Britain to bring their buckets and spades! Expect lots of people enjoying power kiting and kite buggying.

The sand dunes and low cliffs make Wilsthorpe a stunning location, and it’s a great place to spot a variety of sea birds. Unlike most Blue Flag beaches, there are no restrictions on walking dogs either.

There is parking fairly near the beach, as well as a small number of cafés and shops, and you could also reach it via Bridlington train station.

But one of the beauties of Wilsthorpe is its proximity to some of Yorkshire’s other well-known destinations: 40 miles from the historic beauty of York, and a mere 20 from Scarborough and the edge of the North York Moors.

The North Norfolk coast is crammed with beautiful little villages with lovely beaches, but it would be hard to beat the sandy stretch of coast to be found at Mundesley.

Nine miles down the road from seafood hub Cromer and its amazing crabs, Mundesley is tiny and unassuming: a couple of shops, a few pubs and a tea room – although it does also have the diddy Maritime Museum, one of the smallest museums in Britain.

Yet the reason people come here is simple – the beach. A massive stretch of lovely sand that seems to go on all the way down to Suffolk: there are rock pools galore, great spots for fishing and plenty of fossils being washed up, too. And because the beach is sheltered by cliffs, it’s virtually wind free.

A nearby car park makes getting there a doddle, while the village is also blessed with two great and historic pubs: The Royal Hotel is famous for having put up Lord Nelson, while The Ship Inn is nearly 300 years old. Both serve great food and a selection of the county’s rather nice ale.

If you’re after masses of clean coast with family fun for all, Hayling Island is a top choice.

The West Beach is its most popular stretch – you can go fishing, surfing, jet-skiing, visit the skatepark, work on your muscles at the outdoor gym or play beach volleyball.

A miniature outdoor railway will please little ones, while the massive Funland has three roller coasters and enough to entertain kids of all ages.

But it’s not all amusement arcades – Hayling Island is the perfect platform from which to explore some of the best nature in the south.

Walk Hayling Billy Coastal Path, discover the nearby South Downs, and visit the New Forest, only a 35-mile blast up the M27. You can see the Isle of Wight from the island – a ferry ride away from Portsmouth.

The beaches are pebbly, so you won’t need the bucket and spade. But parking’s easy – over 500 spaces, costing about £3 a day.

A mile south of the more famous Whitley Bay and only 20 minutes by car from Newcastle, Tynemouth Longsands is just over half a mile of sandy beach perfection.

Last year the tough internet crowd on TripAdvisor voted it the fourth best beach in the UK and 12th best in Europe!

Renowned for its spectacular coastal views, it’s also one of Britain’s best surfing beaches. Just head to the famous Crusoes café at the south end of the beach for a drink and get a front-row seat.

You can hire surfboards if you fancy riding a few waves yourself, and even take lessons. Just remember it’s the North Sea so a bit chilly.

The beach is easily accessible (half an hour on the Metro from Newcastle to Tynemouth) and there’s loads of parking at 80p an hour (unless you get there early and nab one of the free spaces near Crusoes).

It has very clean loos, outdoor showers and summer-only lifeguards. Dogs aren’t allowed from May to September, except on a small northern stretch.

At the most westerly point of Cumbria you’ll find another one of Britain’s great beaches: St Bees.

It’s another one of those beautiful seaside places that’s changed little over time – there are no tacky shops like you’ll find 100 miles down the coast in Blackpool; just a Post Office, a couple of pubs, a few shops, a café and that incredible expanse of Blue Flag-worthy sand.

Two car parks service the beach (they charge but aren’t hideously expensive), making it an easy place to leave your car. Once out of your car you can head to the excellent Hartley’s Beach Café for a light snack, before setting off with your bucket and spade. Or buy some from the shop if you’ve left them behind.

This area is brilliant for those who enjoy a spot of nature, too. St Bees Head has an RSPB bird reserve with the only colony of black guillemots in Britain, while the red sandstone in the area’s cliffs is 200m years old. The local school is worth a quick peek as well – it was founded in 1583 by Edmund Grindal, the Archbishop of Canterbury under Elizabeth I.

St Bees is just outside the Lake District, making it a great base if you want both a beach and the UK’s most impressive National Park on your doorstep.

• For more information, check out the Blue Flag website. Discover places to stay and all around the UK and abroad with Campsite Finder.