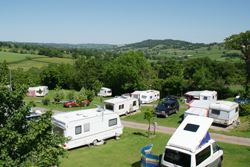 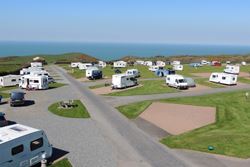 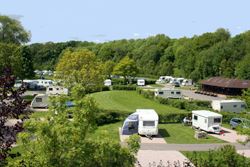 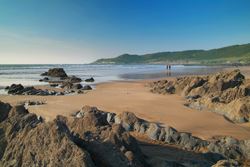 Ladram Bay stretches west from Sidmouth, towards Budleigh Salterton. It’s a sand and pebble beach bordered by spectacular red sandstone and mudstone cliffs, and amazing sea stacks. This is surely one of Britain’s most stunning and dramatic cliff formations. Ladram Bay Holiday Park caters comprehensively for families. Major development is underway for the 2015 season, involving extending the leisure complex, increasing the size of the pool and creating a children’s interactive pool play zone with slide. The park’s Pebbles restaurant, with views over the bay, is also getting a completely new look. Pitches are on level tiers with views across the bay.

Woodlands Grove, roughly three miles north-west of Dartmouth, has its own theme park, set in a valley on one side of the holiday park. Indoor rides, slides, net climbs, bumper boats, a mirror maze, swing ships, an avalanche ride, pedal boats and dune buggies are just a few examples of the scores of attractions on this park. There’s a zoo farm, too, plus a falconry centre and a choice of places to eat. Entry to Woodlands Family Theme Park is free while you’re staying at Woodlands Grove. Some of Woodland Grove’s pitches are hardstanding, others are grassed. Facilities include family bathrooms, a shop and an eaterie. 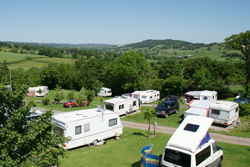 Close to the A35 that takes you west to Honiton and Exeter, and east to Lyme Regis, Bridport and Dorchester, this park’s situation makes it a brilliant choice for exploring the south Devon coast and onwards into Dorset. The genteel, little resorts of Seaton and Sidmouth are a delightful attraction of this region and the Roman city of Exeter is 24 miles away - well worth the trip for the magnificent architecture of its cathedral. At Andrewshayes the emphasis is on families. The park has a covered, heated pool, bar and takeaway food service, and a games room with air hockey and pool tables. 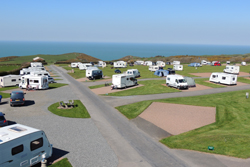 Damage Barton is a 16-acre campsite with 110 pitches and various attributes that make it unique. Part of a 600-acre beef and sheep farm it is situated on a headland on the beautiful north coast with panoramic sea views. It has all the expected facilities, maintained to a markedly high standard, and there is an on-site shop, open daily throughout the season. Part of the site is a Caravan Club site that is open to members only. This area is situated towards the top of the campsite with the independent part being the lower section. Exploring on foot, there is extensive access direct from the site across farmland to a network of footpaths including the SW Coast Path.

Castle Brake is 1.1 miles from the village of Woodbury in the idyllic setting of Woodbury Common, a noted walking area. The park is a short drive from the coast, at the quiet resort of Budleigh Salterton, which is a two-mile stretch of pebbled beach that makes great walking territory. Castle Brake has a restaurant and bar. Facilities include a heated shower building with family bathrooms, a play area and cycle tracks. Pitches are in two touring fields. One has hardstanding pitches with water, electricity and drainage for each pitch. The other has grassed pitches with electricity. 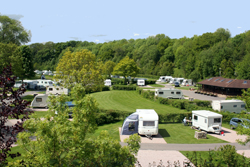 Dornafield is a Caravan Club-affiliated site, just south of Newton Abbot, between the villages of Denbury and Abbotskerswell. The rugged expanse of Dartmoor stretches out to the west of this region. Two adventure play areas, a woodland play fort and a living willow den are spread out in various areas of the park. Farm buildings have been converted into a games room and a shop selling food and camping accessories. There’s a tennis court and two areas where dogs can be exercised off leads. Pitches for caravans are in two sections, called Buttermeadow and Black Rock Copse.

This location will appeal both to families looking for a beach holiday and people seeking nature interest. It’s less than a mile from the beaches of Dawlish Warren and close to the 500-acre Dawlish Warren National Nature Reserve. At Lady’s Mile, swimming is a great attraction. There are indoor and outdoor pools with flumes and a separate plunge pool. There’s a bowling alley, indoor play facilities and an adventure play area with an eight-metre tower and slides. Lady’s Mile also has a gym and sauna, a restaurant and a takeaway. 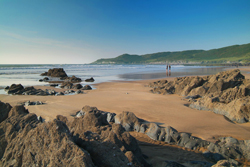 Just inland from Woolacombe and quiet, pretty Mortehoe, a buzzing holiday atmosphere awaits you here, plus ocean views. The beach is a 15-minute walk away. Pitches are spacious – on grass, concrete or gravel. Facilities include family bathrooms, baby changing areas, dishwashing sinks and a launderette. The park has a pool complex and offers family entertainment, plus a health spa and sports area. Woolacombe Bay is one of four family parks owned by Devon Holiday Parks. All are close to Woolacombe. If you’re staying at any one of them you can visit the activities at any of the others.

Springfield Holiday Park is between the villages of Tedburn St Mary and Cheriton Bishop, both with pubs and shops, and 10 minutes from Exeter. Attractions in this area, on the edge of the Dartmoor National Park, include the spectacular Canonteign Falls, 12 miles south of the park. This is England’s highest waterfall, descending 67 metres to tranquil lakes. Springfield is a quiet holiday park with a heated open-air swimming pool, a games room with snooker and table tennis tables, plus a playground with climbing frames.

The north Devon coastline is rich in tourist attractions, from the amazing traffic-free privately owned village of Clovelly to the twin towns of Linton and Lynmouth. There is, though, a lesser-known and fascinating place that’s well worth a visit, right on the doorstep of Hele Valley Holiday Park. It’s Hele Corn Mill, 300 metres from Hele Bay beach. Hele Valley Holiday Park is a mile east of Ilfracombe. Explore its wildlife-rich nature trail. There’s a choice of pitch types and facilities include free wi-fi and a heated shower building.