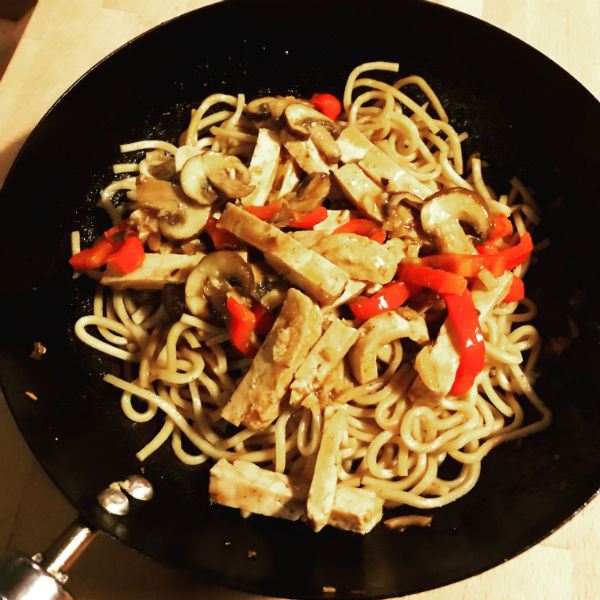 Check out the latest Guyrope Gourmet recipe in association with Campingaz. Josh Sutton goes vegetarian… and discovers the joys of tofu.

There have been a few changes in the Guyrope Gourmet household lately, especially as the kids are growing up.

Thankfully, the enthusiasm for camping is still very much firmly in place, and we’re already thinking about the long summer holidays and where we might pitch up for our fortnight’s camp. I’m rooting for our favourite spot in North Wales, but the kids are begging for warmer climes.

A trip to South-West France for some sun, sea and surf might just persuade me to change my mind, but I am a creature of habit and tend to get a little ruffled at the prospect of change.

The latest change though, and this is bound to have an effect on my persona as the Guyrope Gourmet, is the fact that both my daughter and my wife have gone vegetarian. So wherever we pitch up this summer, the menu will largely reflect a meat-free endeavour.

I have to say, to my surprise, that my recent foray into cooking vegetarian food has been a thoroughly enjoyable one. Not least because I am a huge fan of soup, but rather because I’m beginning to explore and discover new foods and new tastes. 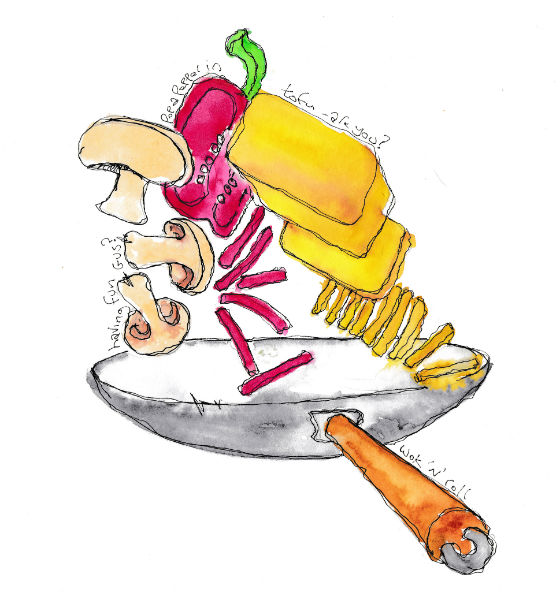 Whilst Quorn and vegetarian sausages have long been on the menu in the Guyrope Gourmet kitchen (Linda McCartney’s being my personal favourites), I’m starting to discover the merits of tofu.

What I had dismissed as some form of grotesque hippy food, turns out to be quite a versatile little source of protein! It’s really good at absorbing flavour, so dunking it in some sort of marinade or other is usually the thing to do before cooking it.

For this dish though, I used the smoked variety, which has plenty of flavour in its own right.

Another great thing about tofu is that it doesn’t take very long at all to cook, so served up on a bed of fresh noodles, it make for the most perfect camping meal.

If you’re into lightweight camping, then using dried instant noodles would be just right for the job.

Smoked Tofu with noodles and black bean sauce (feeds four)
I’ve cooked this both with my ‘perfect rice’ recipe and with garlic and ginger noodles and to be honest, both work equally well. In the camp kitchen, the noodles work out quicker and easier, saving both time and gas. You do need two pans though, so there’s a bit more washing-up (but that seems like a fair compromise to me).

How to cook it
Heat the oil in a frying pan and throw in the chopped garlic and ginger. Give it a quick stir to spread those flavours around the oil in the pan, then throw in the chopped mushrooms and peppers. As soon as the mushrooms begin to soak up the oil, add the two types of soy sauce and the black bean sauce too. Finally throw in the tofu and give it a good stir to coat everything in the sauce. Stir fry for just a couple of minutes and serve on a bed of noodles.

How to cook them
Heat the oil in a wok, or large frying pan. Throw in the garlic and ginger and as soon as the wonderful aromas hit the nose, chuck in the noodles and the soy sauce and give it all a good stir. The noodles are already cooked, so you’re just heating them up really, but the flavours of the ginger, soy and garlic will really lift them. 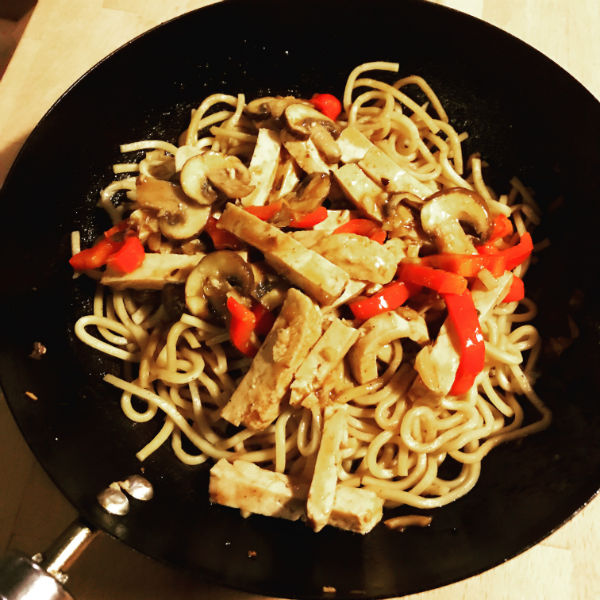