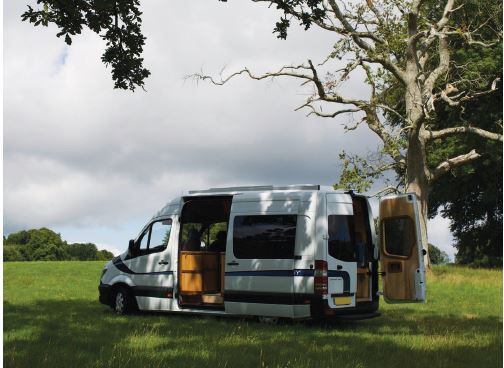 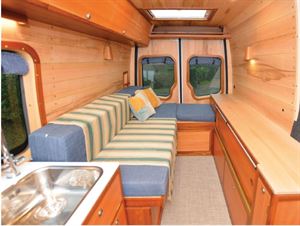 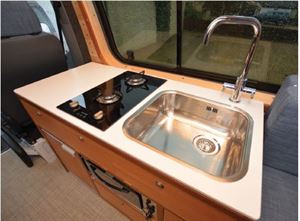 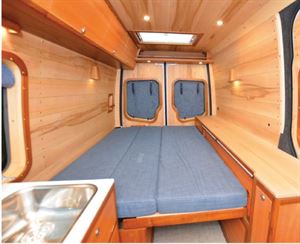 James Winby Furniture & Design is a cabinetmaker based in Wiltshire and its first ever motorhome debuted at the Western Motorhome & Campervan Show at Malvern. Company founder, James, had always fancied the idea of building a campervan using his company’s woodworking skills and the resulting vehicle, shown here, is just a taste of what could be achieved.

Based on a used (2016 registered) Mercedes Sprinter, it’s called the Land Yacht, reflecting the fact that James has previously worked on boats and wanted to instil a maritime feel in his first campervan. Unusually, perhaps, this demonstrator was not built to meet a customer order but instead it’s James’ idea of what a Winby customer might want – something specialist and bespoke, spacious and airy, with a yacht-like feeling inside. This was never going to be another lookalike motorhome to compete with mainstream models.

A medium-wheelbase Mercedes-Benz Sprinter was chosen as the base for Winby’s first conversion for a variety of reasons. The sub-six-metre length was seen as being ideal for the type of empty-nester customer who might want an easy vehicle to drive and one that’s not too big to escape off-grid.

There’s the allure of the three-pointed star as well, because this conversion was never going to be anything but a premium-priced product. That said, James says the company is willing to convert other base vehicles, especially the broader Fiat/Peugeot twins (in order to accommodate a transverse bed), although he feels the company may ultimately want to concentrate on the Mercedes.

It isn’t just the dimensions that are geared towards getting away from it all, though. The Land Yacht is equipped for life away from fully equipped campsites, with not one, not two, but three 110Ah leisure batteries – next time, they’ll be lithium ones, too, to save weight and increase efficiency. Then, on the roof, are two 180W solar panels, so you should be able to survive away from hook-ups for a long, long time.

This camper isn’t just about living the vanlife away from the hordes, though – it’s about doing things differently. It’s the interior design that sets it apart. OK, you’d expect a motorhome created by a furniture maker to excel in the cabinetwork department but it’s also about the look and feel inside this vehicle. There’s no carpet trim inside a Winby; it’s all wood.

The timbers selected here were specifically chosen to give a yacht-like environment and the walls and ceiling are lined with quarter-inch-thick ash panels, behind which are a dense bitumen sound-deadening material and solid foam, foil-backed insulation. As I sat inside and chatted with James, it was clear that there was none of the usual drumming on the roof as September rains did their best to add sogginess to the proceedings.

Despite the dampness outside, it wasn’t gloomy within the Land Yacht, though, as James hasn’t used the sometimes small and dark double-glazed plastic windows. Instead, he’s installed larger glass panels to fill the Sprinter’s apertures, both in the side and rear doors and behind the offside galley. There are no windows in the lounge (bar the ones in the barn doors), but that’s what gives the Winby its boat-like vibe. And there is a Heki rooflight to give natural light from above.

Clearly, James loves wood – and if you’re admiring our images here, I guess you do, too. The porthole-style surrounds to the windows, in Ash, are a work of art but, even more so, the nautical Davey lights mounted on the walls are a real talking point.

All the wood used is locally sourced and a customer could choose the timbers selected. Here, there are teak trims (such as the cupboard door surrounds) and maple countertops.

Everything inside the conversion is sprayed with a two-pack acrylic lacquer – as used on Sunseeker yachts, we’re told – for durability. It’s an external-grade finish and UV-resistant, too, so your camper should still be looking good years hence.

But with all this woodwork, I imagined the payload would have taken a hammering. Not so, as James explains that a cedar veneer has been used on a super-light yachting plywood base. This 3.5-tonne Mercedes van is said to boast nearly 700kg of payload.

While other six-metre van conversions offer fixed beds and even separate shower washrooms, the Winby focuses instead on maximising storage space and room for its human inhabitants to spread out. Surprisingly, perhaps, there’s no washroom, although James would entertain building a larger model, on a long-wheelbase Sprinter, for customers seeking full facilities.

So, with such a large aspect removed from the itinerary, the Winby conversion could take a different approach and adopt a non-typical layout.

You enter the ’van via the Merc’s big side sliding door, where you’re greeted by the first signs of the company’s cabinet-making background. Instead of hard or sharp corners, there are radiused edges to the cabinets that face you on either side of the entrance, one of them featuring a little flap where you could rest a drink.

Opposite is the kitchen, while the lounge, featuring a long L-shaped settee, is to the rear offside, facing an equally lengthy (and low) sideboard. There’s no tall furniture in this ’van, which is a deliberate design aspect to increase the feeling of space.

The cab plays no part in on-site living, although Winby has reupholstered the front seats and added a reversing camera to this otherwise standard Sprinter 313 L2H2 van. Silver screens are provided to cover the cab glass, while for the living area – once again doing things its own way – Winby offers lined curtains that roll up and remove in the day and attach magnetically when needed. The usual motorhome industry fittings are few and far between here.

So, this Mercedes is more campervan than motorhome, but it also favours a more outdoor lifestyle. There’s not just an outdoor shower, revealed when you open the back doors, but also a Cadac 2 Cook 2 Pro slide-out stove and griddle for al fresco cooking. And you’ll have plenty of room to store outdoor chairs, etc, in the boot area measuring 1.21m wide, 690mm deep and 450mm high. There’s a hatch in the base of the settee, too, to allow long items to pass through and, while there’s no walk-in washroom, the cupboard behind the passenger cab seat includes space for a Porta Potti 365 toilet (as well as the associated chemicals and loo roll).

With no swivel cab chairs, the L-shaped settee is the only place to relax. It’s a good size, at more than 6ft long, but, with no shape to the cushions, it needs scatter cushions for comfort and it’s rather high, unless you have very long legs. Its height was dictated by the Truma 10-litre gas-fired boiler below, but this is under review to allow a lower sofa.

The whole settee base rises on gas struts to reveal plenty of storage underneath, while the long cabinet opposite has lots more cupboard capacity behind sliding doors.

The table eschews convention and attaches to the sideboard before being supported by a corbel, so there’s no leg to get in the way. With the huge countertop behind, this area could work well for anyone envisaging a workstation here and using the ’van for business rather than pleasure.

At night, the settee simply slides out to meet the furniture opposite, creating a completely flat lengthways bed on sprung slats. It measures 1.89m by 1.35m and there are USB ports at the head of the bed and a neat little cubbyhole – beautifully crafted in wood, of course – for a bedside drink.

The kitchen has plenty of worktop, thanks to the cabinets opposite and, while the fridge and cooker are familiar motorhome-industry fittings, the sink is an XL-sized domestic fitting. Cooking comes via a Thetford two-burner gas-on-glass hob, with a separate grill below. The fridge is a 55-litre Dometic compressor model but a larger version could be installed if required.

Other galley features include a large drawer under the grill, a built-in bin, a MaxxAir two-way fan in the roof, a chopping board cover for the sink and excellent illumination from an LED strip. All the drawers are on soft-closing runners and the mains sockets are hidden.

In addition to the spec already described, this show model has an MV Airo diesel heater, underslung 73-litre fresh and 30-litre waste water tanks, a three-metre Fiamma awning and a Thatcham-approved tracking system.

Clearly, Winby’s first camper is not going to appeal to buyers of more mainstream models but that was never the intention. It’s aimed at customers that don’t want an off-the-shelf product and who have deep enough pockets to afford something more bespoke. Prices for a conversion on your own van start at £30,000 but you’ll need around double that for one matching the specification here, or find £79,000 for the whole vehicle including the Mercedes base.