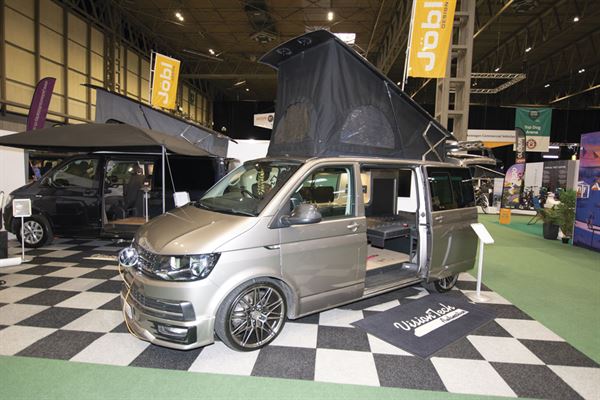 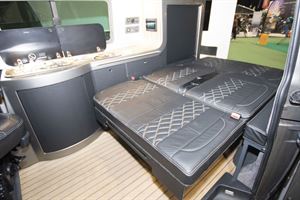 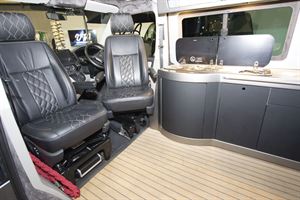 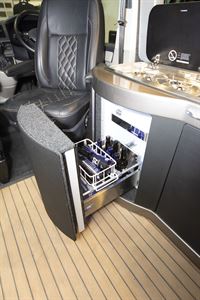 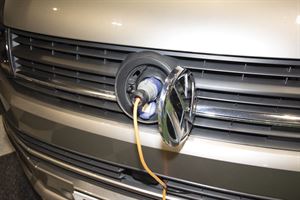 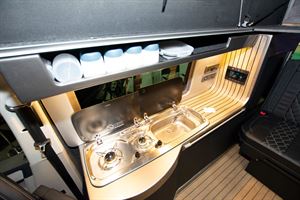 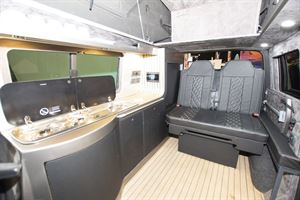 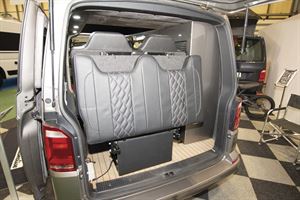 Winner of the Caravan and Motorhome Club’s Design Awards 2020 in the campervans over £47,000 category, the 20/20 Vision from VisionTech should, perhaps, have been in a class of its own, with a price tag of £87,882. But that just shows where this model sits in the hierarchy of campervans, as well as in VisionTech’s range. It’s certainly one of the most expensive pop-top campervans ever to grace these pages.

It looks the part, without being OTT. Being based on a Highline Transporter with 204PS engine and DSG gearbox is a good start. Then, there are a number of exterior styling options – including the 20in alloy wheels (£1,900), Bilstein B14 suspension (£1,295), carbon-fibre mirrors (£295) and Sportline front spoiler (£625).

A neat touch is the home for the mains hook-up – hidden behind the Volkswagen badge on the grille! There’s a custom-made bracket to put the leisure battery (lithium, optionally) under the bonnet, while the gas tank (£795) goes underneath.

The pop-top roof is not the usual German import but a British Hilo roof, which is said to add just 15mm to the height of the base van with no fixings or seals on show.

This rising roof also claims to lift higher than its rivals, boasting 520mm headroom at the rear and 1.35m at the front, and it is both TÜV approved and M1 simulated crash tested. An electric version of the roof is available, too, while the Scenic Canvas (£250) allows the whole of the pop-top to open to the elements.

The 20/20 Vision’s differences are more obvious on the inside, where the layout might take the usual side kitchen theme but the construction is quite different.

Here, the furniture is made from a carbon-fibre composite, with the company claiming advantages in terms of weight and strength, as well as resistance to oil, water and odours. It requires no framework (to the benefit of storage space) and can be formed into shapes that are hard to achieve with wood.

This show model had the Executive Lining Package (£1,995) and leather interior (£1,895) – even the front of the kitchen is covered in hide! At the forward end, the unit bows out where it conceals a drawer-style fridge.

Alongside is a selection of slide-out storage using the Nova Pro Scala drawer system and Häfele hinges – both names recognised in the domestic kitchen industry. Behind each drawer is an electro-magnetic catch which automatically locks shut when you start the engine.

Fridge aside, the galley fittings include a mainstream Smev hob/sink combination unit, while the worktop not only matches the Deck Lite floor (£650), but it curves smoothly into the side of the wardrobe.

VisionTech is most proud of its own rear bench seat, which has been M1 pull-tested. This glides down from a seat into a completely flat bed electrically, to the delight of anyone who has struggled with traditional rock ‘n’ roll bed systems. It can even be operated by remote control, although it omits the boot storage area for bedding usually seen in VW campervans.