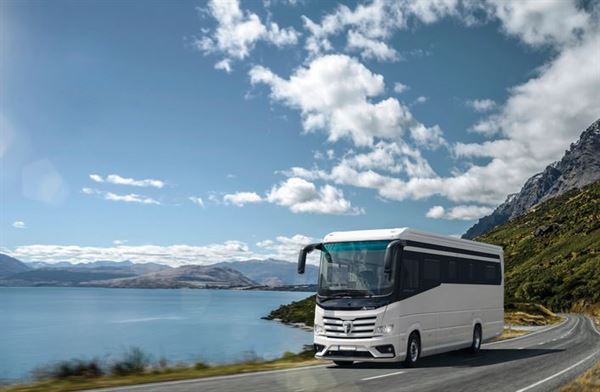 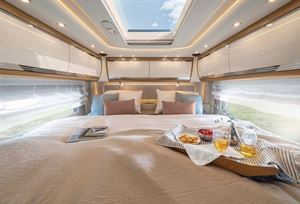 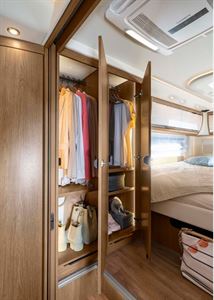 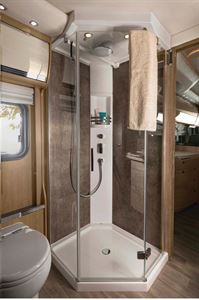 Previously, the Morelo Empire Liner was based on the Mercedes-Benz Atego, a chassis with a ‘modest’ maximum gross weight of between 11,990kg and 15,000kg. Its 7.7-litre OM936 power unit puts out 299bhp and 1,200Nm of torque. But, quite obviously, these figures were not enough…

So, at the 2021 Caravan Salon, Morelo launched an additional version of the Empire Liner, using the Mercedes Actros chassis – and things got a lot more serious. Gross weight climbs to 18 tonnes, power to 400bhp and torque to 1,900Nm – yes, almost the pulling power of six Fiat Ducatos – from a 10.7-litre six-cylinder motor.

Or you can upgrade to 455bhp and 2,200Nm! And that’s not all. The automatic transmission gains four more ratios – total, now 12. Even the AdBlue tank nearly doubles in size, to 60 litres. That’s as much as some motorhomes’ diesel capacity, but here the Derv tank takes 390 litres, with an option to increase to 500 litres. At today’s prices, a fill-up would cost over £800…

But, if you can afford an Empire Liner, such trifling statistics won’t worry you. Here is a motorhome priced, for the 2023 season (2022 was sold out long ago), at a nice round €500,000. Of course, that’s before options – the show model at Düsseldorf boasted another €69,230 worth of additional goodies.

This isn’t just a very big, very powerful and very expensive motorhome. It’s the winner of the German Design Award 2018 and it sits above Home, Loft and Palace models in the Morelo hierarchy. As such, its specially reinforced side walls and roof are thicker – 52mm instead of 42mm and it has air suspension on both axles, complete with a lifting and lowering function.

Of course, there’s a heated double floor (480mm deep), with the exterior locker flaps centrally locked via a switch in the entrance area. The habitation door comes with a code for entry, while the largest models in the range feature not just a garage but a car garage – suitable for a Smart, a Mini or a Porsche 911 as you climb to the 11.99m flagship 119 GSB and 119 GSO floorplans. All models have real glass double-glazing (including the cab side windows, which open electrically).

Inside, the Mercedes-Benz dashboard from the Actros is retained, and cameras, rather than exterior mirrors, are an option. Cab seats have air suspension and sat-nav is, of course, standard – you won’t want to do a three-point turn in one of these!

In the living area, there’s a stepless floor – which, naturally, has hot water heating built in. A slide-out (extending the lounge area by 45cm) is available as an option to increase the already generous living space of a motorhome measuring 10 metres in length (or up to 11.99m in the top versions).

Incredibly, the Empire Liner isn’t the top of the Morelo tree – that’s the Grand Empire (from €668,000) – but this model does get the kitchen from the flagship. That includes a 196-litre Siemens domestic refrigerator, while an oven, microwave and grill, Nespresso coffee machine with milk frother, and mineral worktops are all standard. A dishwasher is optional.

The washroom has a rainfall showerhead, real glass shower doors and a ceramic toilet (with 280-litre marine-style holding tank). The standard 410-litre fresh water tank can be upgraded to 560 litres, while gas (for cooking and the hot water central heating) comes from a 120-litre tank. Two 210Ah lithium batteries are standard, but you can add two more. Everything to the max. Admire the images here and, when your lottery numbers come up, don’t forget to order the double air horn fanfare option (€895) for the Toad of Toad Hall effect…