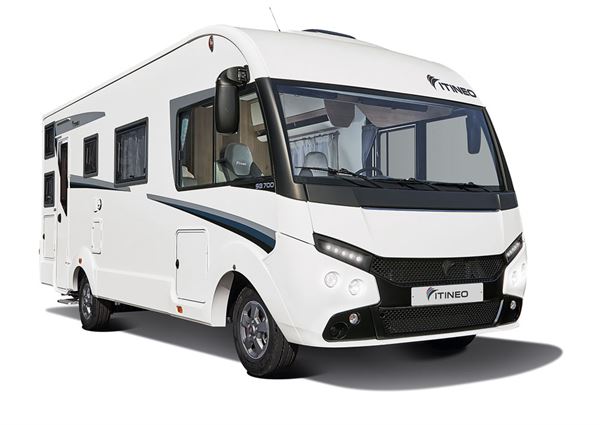 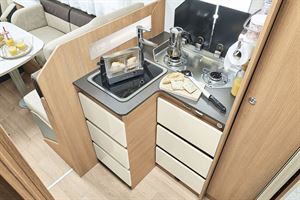 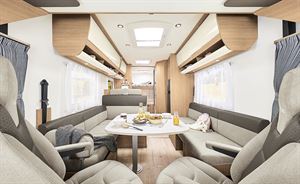 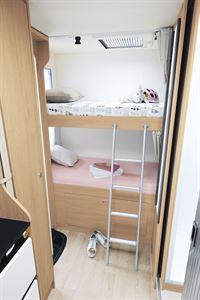 Itineo is a one-of-a-kind brand. It builds an almost entirely A-class range of motorhomes but, rather than priced into the stratosphere, these vehicles – ranging from 6.55m to 7.43m – are aimed at buyers of mainstream models around the £60k mark.

Its vehicles, built in the Rapido factory in Mayenne, are distinctive in design and layouts cater not just for couples but families, too. It has two five-berths and one six-berth (this SB700) in its line-up, all with bunk beds – an extremely rare find in the rarefied world of A-class motorhomes.

The SB700 is a sub-7m model based on the Fiat Ducato. It’s an established vehicle in Itineo’s range but with detail enhancements for 2020. You’ll see new side and rear exterior striping, a new blue Itineo ‘sail’ logo, and ‘by Rapido’ branding to link to the better-known parent marque.

Also added for this season are a skylight over the cab’s drop-down bed and a large lengthways sunroof with four spotlights above the lounge.

The interior ambience has been updated, too. A metallic glossy white finish now adorns the overhead cupboard doors, while Cappuccino TEP (leather-look) upholstery is a new option. Net curtains and carpets are also new this year, but a more important change is the adoption of a simpler system to convert the nearside settee into travel seats. Armrests have also been added in the lounge.

The kitchen in the SB700 is centrally positioned on the offside, with a 150-litre two-door fridge/freezer located opposite (and a small oven/grill above, to suit the British market). A backlit acrylic strip has been introduced, while the galley design also gets a new laminate worktop, gloss white handleless drawer fronts and a smooth finish for the sink.

Greater changes concern the washroom, which has been completely redeveloped. Sited opposite the kitchen, on the nearside, and including a separate shower, the ablutions space gets a stylish new thermoformed round basin with backlit storage alcove below. The upper locker has a mirror and a 230V socket is provided.

The key feature of the SB700, though, remains its transverse rear bunk beds – at 2.17m by 0.73m (manufacturer’s figures) these aren’t just for kids! Mum and dad will probably still opt for the drop-down bed in the cab, though, which is 1.90m by 1.40m. And if you’re travelling with the full complement of six folk, the lounge also converts into a transverse bed (2.00m by 1.35m), although you’ll have to clamber over this to get to the front berths.

If it’s family-sized storage you’re after, the lower bunk bed can be folded up to create a garage with large loading door on the offside. If you need more payload, the Ducato chassis can be upgraded to a Heavy version, while the standard 140bhp engine can be optioned up to either 160 or 178bhp from the standard 140bhp.

One option that you won’t want to go without is the Pack Life, a feature that’s likely to be fitted to every new Itineo. It comes with manual cab air-conditioning, ESC with ASR, hill start assistance, cruise control, a Pioneer radio with Bluetooth, heated exterior mirrors, a habitation door with window and flyscreen, LED daytime running lights and a reversing camera with 7in display.

Also available are a Navigation Pack and three choices of upholstery, while Fiat’s automatic gearbox, Eco Pack, Traction Plus and tyre pressure monitoring are also offered as extras.