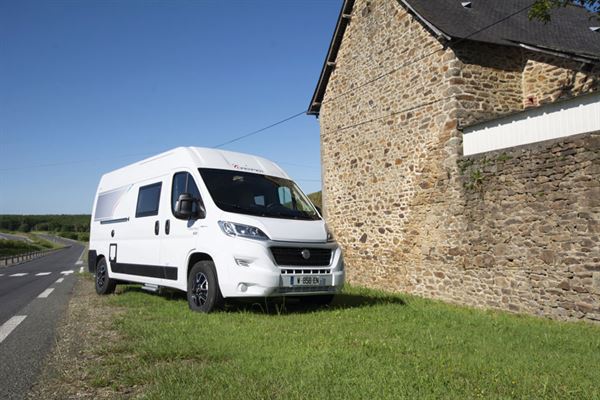 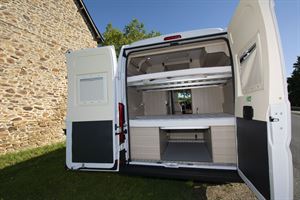 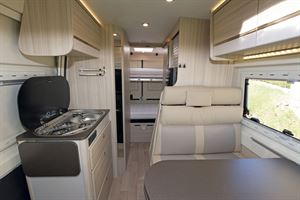 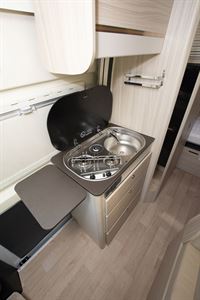 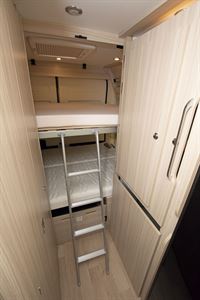 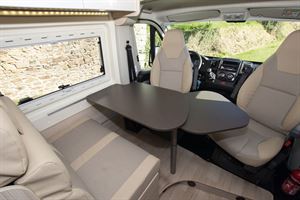 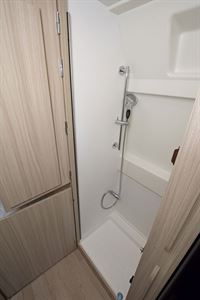 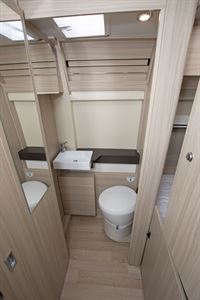 Here’s a variation on the oft-seen and ultra-popular continental van conversion with transverse rear double bed. It’s still a six-metre Fiat Ducato panel van that provides the base and the layout looks super-familiar, but here there’s not one but two double beds at the back. So the Dreamer D53 is a full four-berth, with four travel seats (including the driver).

Of course, the double bunk concept in itself is not new – and the D53 has been in Dreamer’s entry-level Fun range for a while – but the 2020-season version of this model gets the Modul’Space washroom design that was so well received when it first appeared in Rapido’s V55 (and has since been copied in other Dreamer and Rapido models, including the new Living Van).

The patented Modul’Space system has a wardrobe that sits in the shower cubicle, simply rotating out of the way when you wish to use the latter. Just remember that, here, you need to slide half of the upper rear bed out of the way before you can move the wardrobe.

So, the D53 has a separate shower cubicle, which you certainly wouldn’t expect in a camper of this size, but it also has a toilet area opposite with a door that unfolds across the centre of the campervan to create a full-width washroom. There’s practical washroom storage here and useful worktop around the smart new basin, but it’s worth noting that this spacious changing area is not 100% private from the bedroom. Beware children taking a cheeky peek...

The rear sleeping area that’s key to this design incorporates two double beds, one above the other, and each with a two-piece Bultex mattress.

The lower bed measures 1.85m by 1.27m, with the upper one almost the same size at 1.86m by 1.25m (although shelves and sloping sides up top make the usable length rather less). Another issue is headroom – 0.63m down below, 0.53m up top, meaning that you need to be flexible to get in and out. The upstairs bed is definitely for kids only.

Opening windows in the back doors and a small rooflight ensure sufficient ventilation for all bedroom occupants, while a single flexible wand reading light is fitted for the low-level bed.

The front of this French campervan is completely conventional, with a half-dinette, swivel cab seats and a table with swing-out extension panel (vital for a fourth diner).

Adjacent, by the sliding door, the galley looks pretty standard, too, with its combination hob/sink unit and additional folding worktop.

Three large soft-close drawers are a bonus and an oven is available as an option, but the real surprise here is the 135-litre fridge/freezer – much bigger than most rivals’ coolers and as large as you’d find in most coachbuilts.

As with other, more typical, rear bed campervans, the Dreamer has a large rear boot for load carrying. This measures 1.28m by 0.76m by 0.50m high with the bottom mattress in place. For bulkier items to be loaded the slatted centre section of the bed is simply removed. This area also houses the gas locker on the nearside and the fresh water tank (100 litres) opposite.

The D53 is rather a one-of-a-kind model with its bunks, separate shower and big fridge, all incorporated into the compact, six-metre Fiat van. As a four-berth it is compromised compared with Dreamer’s Camper Five, Camper Van XL and Family Van models, but it undercuts those by at least £4k, which could be the deciding factor.