This new S514 has some novel and useful design features in the garage/bedroom area, thanks to the butterfly bed. It’s the keen pricing (especially without options) that is the big attraction here, along with the superior drive of the Ford and the S514’s super-compact dimensions. 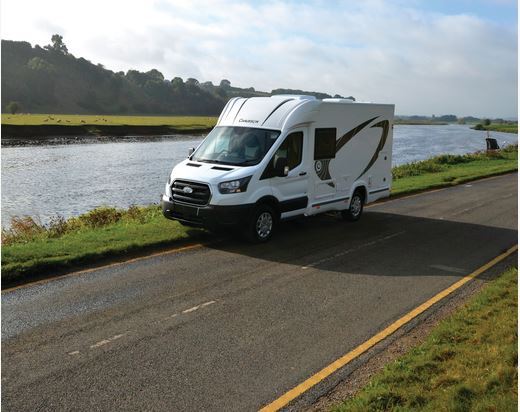 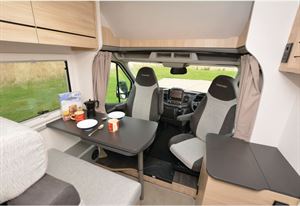 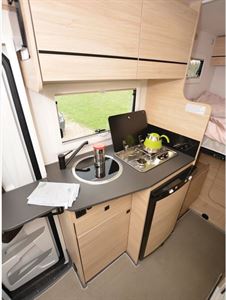 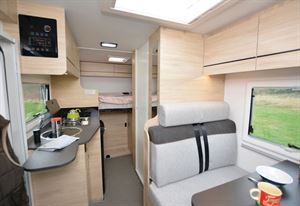 Dealers everywhere are short of secondhand stock. The newcomers flooding into the market haven’t brought the normally expected trade-ins, while yet more newbies have snapped up what pre-owned vehicles there are on the forecourts. But still the demand is there for ‘affordable’ motorhomes.

Hence the arrival of more entry-level motorhomes in many 2022-season ranges to plug the gap. Auto-Trail’s new Expedition coachbuilt got the MMM test treatment in the November 2021 issue. Now, here’s a rather different approach from French firm, Chausson. It, too, has an attention-grabbing sub-£50k price tag and, unlike its maker’s established models, it comes only in the most basic First Line trim level.

It’s not just the price that’s smaller than you might expect on this Gallic debutante. The S514 is a whisker under 6m long and only 2.10m wide – that’s a useful 25cm slimmer than a typical coachbuilt motorhome and only a fun size Mars bar broader than a Fiat Ducato van conversion.

The intention is clear, this Chausson isn’t just aimed at those on a limited budget, but also buyers considering a campervan. The two-model ‘S’ range even mirrors what you’d anticipate seeing in a continental van conversion line-up – this version with a transverse bed and a longer model with twin singles in the stern (the 6.59m-long S697GA).

Of course, there’s nothing new about a slimline coachbuilt with a fixed bed – Hymer brought this concept to market with its Van model way back in 2005 – but, today, the S514 is unique in offering such a format on the Ford Transit chassis, rather than the ubiquitous Fiat or its Peugeot/Citroën cousins.

The S514’s styling is neat and contemporary, but you’ll soon spot areas where money has been saved – the plastic wheel trims, the black front bumper, the windowless habitation door and, perhaps the clearest indication that this is a budget motorhome, the lack of an overcab sunroof.

That said, it’s not all hair shirts and monastic living – the habitation windows are the posh framed type and the rear panel is pre-fitted with mountings for a bike rack, while the Technibox places all the habitation electrics and the fresh water filler together behind one convenient external hatch and with a divider to prevent risky splashes. There’s an awning light, too, and, if you fork out an extra £1,300 for the Accessory Pack, you get a 3m Thule roll-out awning and a 140W solar panel.

Cab air-conditioning, cruise control, driver and passenger airbags and electric/heated door mirrors are all included in the standard spec, so there’s only one other option fitted here. It’s a pricey one, though, as the Pack+ costs £3,000. It adds the Xzent DAB radio with 9in touchscreen and steering wheel-mounted controls, plus a reversing camera and an engine upgrade from the standard 128bhp (130PS) to 168bhp (170PS).

In motorhome terms that turns the little Chausson into something of a rocket ship. If the mood took you, you could probably make the front tyres smokier than a room full of Gauloises, but, in reality, it just makes for more effortless motoring with fewer changes on the six-speed manual shift.

There’s still a lot to like about this Ford cab, too – especially the much less bus-like driving position compared with the Fiat. The leather-wrapped wheel is of modest diameter and, crucially, it adjusts for both reach and rake. Combined with seats that are adjustable for height, tilt and lumbar support, you’ll be assured comfort for long-distance touring, while the twin-lens mirrors and large display for reversing make for a relaxing time at the wheel.

The Transit also has a softer ride than the Fiat, which is probably a factor in the S514 not having any habitation area rattles on the road. The lack of an oven helps, too, of course, while the reduced spec and compact size combine to allow a payload that even the most accessory-crazed motorhomer will struggle to exceed – a whopping 880kg, even with the options fitted here.

For once, then, you’ll be able to make full use of the garage without contemplating leaving the dog or your partner at home. And it’s a good-sized space – 730mm wide and 1.07m high – but, better still, you can just push on the base of the bed above and it folds out of the way, increasing garage headroom to a maximum of 1.95m!

There are 12V and 230V sockets here, too, but no tie-downs, while the smaller nearside door cannot be clipped open due to the location of the boiler flue. The double locks on each garage door are easy to use, though, and there’s also a sliding door to access this space from inside the motorhome.

Despite its lower price, the S range retains Chausson’s IRP construction with GRP for the roof, walls and underfloor. The 64mm-thick floor promises to keep things cosy in the winter in combination with a 4kW diesel-fired blown-air heater from Webasto that is ultra-simple to operate via a rotary knob – and which can be used while you drive. Certainly, all-season comfort is seen by its maker as a key advantage over van conversions.

Water tank capacities are a further bonus – 100 litres each for fresh and waste – while the former is fully winterised in its inboard location (under the dinette’s bench). The grey tank isn’t insulated but its T-handle for emptying promises quick and easy stops at the waste point.

The habitation door doesn’t benefit from the cab’s remote central locking, and nor does it have an external step, but its internal step (400mm above the road) isn’t too much of a stretch. There’s a flyscreen, too, and useful coat hooks on the inside of the door.

Once inside, the square sides of a coachbuilt motorhome make for a more voluminous living space than in an equivalent-sized campervan. The light-coloured woodwork, white walls and pale grey upholstery all add to the impression of roominess and, while there’s no overcab sunroof, a reasonably large wind-up rooflight is fitted over the dinette.

It’s not all good news, though. There are no reading lights, either for the half-dinette or the cab chairs (which swivel easily for on-site use) and, by modern standards, the LED light fittings here seem quite basic.

The layout here is a conventional continental one but with a couple of twists. Where you might expect a small seat, forward of the door is a low cabinet. Although this hides the gas locker, it also incorporates a surprisingly large top-loading cupboard and it’s a practical TV station, too, with power points above.

A more notable difference is at the rear. We’ve already noted how the rear half of the bed can be raised to increase garage space but the forward half is also hinged and supported by a gas strut. Chausson calls it a butterfly bed because of the way it folds like the wings of a lepidopteran.

Tip the front part of the bed to vertical and you increase the floor space, which will be appreciated by anyone working in the kitchen (especially if their partner wants to get to the loo). Not only that, but you now have easy access to the garage from inside the vehicle, and the wardrobe (with top and front loading) is revealed on the nearside.

Opposite, there’s a large cupboard, and, above that, an open area designed to accommodate a microwave. The food nuker itself isn’t provided, but the necessary 230V socket is, so you can increase your culinary options for around £60.

When you pull the blinds for the night, you’ll notice that there are none in the cab – instead you get thin curtains and a set of external silver screens (never my favourite solution when you have to pack them away wet).

The rear bed itself is, of course, another reason to buy. The mattress length is 1.90m but, if you’re tall, it’s worth noting that the distance from wall to wall gives you an extra 7cm to stretch out in.

You’ll need to use the ladder to access the bed but, once ensconced, you discover a firm, comfy mattress and good ventilation via an opening offside window and a roof vent. The cupboards along the back wall are not intrusive, but lighting here is extremely minimalist – just a small lamp built into the underside of the lockers on the nearside.

It’s also possible to convert the half-dinette into an occasional bed, with feet going onto the swivelled passenger seat. As usual, this isn’t the flattest of berths and its length makes it suitable only for a child.

The lounge also works best for couples, rather than larger groups, although there are four belted travel seats and a quartet could be accommodated – just – around the wall-mounted table. In its standard form the tabletop is plenty big enough for two diners, while a swing-out extension serves the driver’s seat – and, at the same time, imprisons the cab’s occupants!

Maybe that’ll be an excuse for not assisting with culinary matters but, in any case, these won’t be too complex as there’s only a two-burner hob on which to create gastronomic wonders. There’s not a lot of worktop, either, especially once the sink’s loose glass lid has been removed, although a flap by the door does add some serving space and the area forward of the entrance could become the chef ‘s domain, too.

Two large top lockers add to the galley’s storage capacity, which also includes a good-sized, soft-closing cutlery drawer and another generous cupboard underneath that. The fridge is fairly modest, though, at 87 litres capacity. It’s a Trigano-branded unit, which I’ve not seen before, and requires manual ignition on its gas mode. It features a full-width freezer section, but this isn’t removable.

There’s more versatility to the washroom, which resides opposite the kitchen, but I never understand why manufacturers make a washroom door clip open for travel, not closed – surely you want to keep any pongs entombed (especially as mountain roads can make the loo’s contents slosh around)!

On site, with the tambour door pulled shut, there’s pretty impressive use of space, and the ablutions room feels even bigger because of the sheer size of the mirror behind the basin.

The Thetford swivel cassette toilet has plenty of legroom and both a roof vent and a clothes drying rail are fitted in the ceiling. There’s a fairly generous wall cupboard for all your toiletries and medicines, too.

Then, when you want a shower, the moulded washbasin and the wall behind it unclip and swing to the right to make a roomy cubicle that’s all plastic lined for easy maintenance. There’s a separate showerhead and a shelf for shampoo (it’s big enough to act as a seat), while the tray has twin drains, so suds will soak away efficiently. My only small gripe was with the plastic catch that retains the swing wall; I’m unsure how durable this will be in the long term.