The latest Tessoro is now an even better all-round motorhome with added spec and its habitation door on the UK side, while the Ford cab gives it tonnes more driver appeal than Fiat-based rivals. The new 483 layout adds a great bathroom, big garage and large lounge at the expense of galley space, and it works surprisingly well as both a two and four-berth. 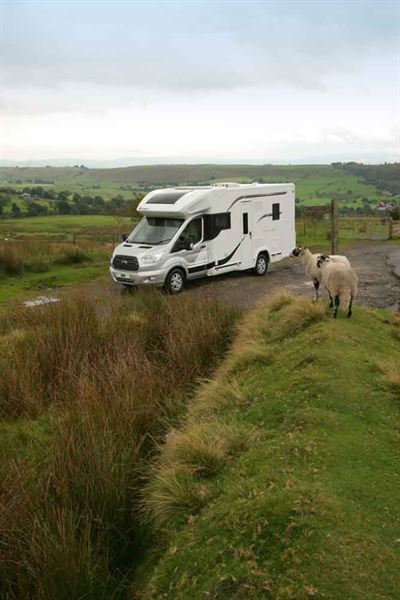 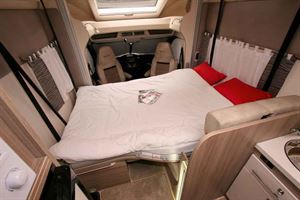 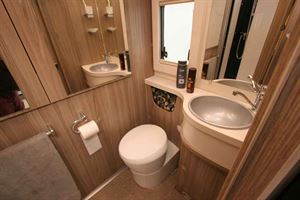 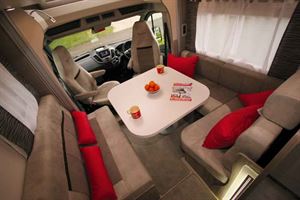 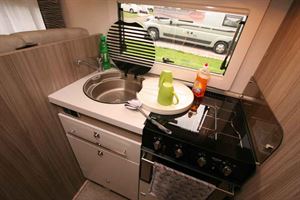 Benimar’s Tessoro range arrived in the UK just a year ago, offering alternative layouts to its (slightly dearer) sister, Mileo. There were two key differences, though – a Ford Transit, rather than Fiat Ducato cab, and a habitation door on the continental side.

For 2018, the Transit base gets even more spec – with automatic lights and wipers and a (very effective) quick-defrosting windscreen added to the tally – but the big news is that the entrance door is now on the UK nearside (something rarely seen on an imported ’van).

There’s also a new layout, taking the tally to six. Unusually, three of those (including this new 483) have a large front lounge and no fixed bed, relying on an electric drop-down transverse double as the main berths. Of the trio, the newcomer sits in the middle size-wise and is the first to major on bathroom facilities.

There’s no doubt that at least part of the appeal of the Tessoro remains its Ford chassis – especially now that an automatic is available. While the Fiat is basically over a decade old now, and showing its age, the Transit is a much fresher design. That strikes you as soon as you sit in the cab, where the ergonomics (apart from the position of the heater controls towards the passenger’s side) are spot on.

You sit lower, too, with a reach and rake adjustable steering wheel, twin armrests, tilting squab and variable lumbar support ensuring a comfortable drive for all. The whole environment feels much less truck-like than the Ducato’s and there’s a smart new addition this season with Benimar fitting an Xzent touchscreen DAB radio with sat-nav and pin-sharp reversing camera built in.

Even the 170-horsepower engine (that’s PS, so it’s actually 168bhp) is standard, giving the Tessoro really gutsy performance. The Tessoro felt surefooted, too, thanks to its motorhome-spec wide rear track and was fairly rattle-free.

Headroom in the garage is 1.31m with the option to increase this to full floor-to-ceiling storage in a small zone on the offside. It’s good to see that there’s almost 500kg of payload and that Benimar includes 50 litres of water in its calculations. All Tessoros come on a licence-friendly 3.5-tonne chassis.

You’ll note, too, the 99% wood-free body construction with XPS insulation (53mm in the floor and roof), the generous water tank capacities (and easy-to-use waste drain), plus the external barbecue point and new, neater styling at the rear.

Another key selling point of this Tessoro will be its generous lounge area. With a long L-settee on the offside (incorporating travel seats for two), a two-person sofa on the nearside and twin swivel cab chairs, there’s room for at least six folk to gather around the vast central table. At 910mm square this is one of the largest motorhome tables you’re likely to come across, so it does rather dominate

I had a very good night’s sleep in a superbly comfortable drop-down bed, which glides down to whatever height you like at the twist of a key. Pleasingly, the electric bed is shaped so as not to interrupt the use of the entrance door (or the kitchen) and the loo is just a couple of steps away.

When the 483 really scores over rivals is as a four-berth. The omission of cupboards below the drop-down bed not only allows it to come down lower in two-berth mode but frees up more headroom for family sleeping below when you’re mob-handed. And the lower bed, for once, is a good one – very big and largely flat. Its make-up is not too complicated, either, involving two infill cushions (easily stored in the wardrobe) and lowering the table electrically, although the small flap that completes the bed base between the two opposing seats felt rather flimsy.

The galley is compromised by all the other stuff that the Spanish maker has shoehorned into bodywork measuring rather less than 7m overall. The main galley unit measures just a metre across and any worktop all but disappears with the glass lids of hob and sink raised.

That’s not to say there’s a paucity of kit. Along with the XL-sized cooler and the microwave, you get a combined oven/grill and a hob with a mains hotplate. There are two gas rings, an extractor hood above, and a removable drainer for the sink.

Bearing in mind the massive fridge, there’s a decent amount of kitchen storage, including a large soft-closing cutlery drawer and a second, deeper drawer that’s ideal for pots and pans, etc, below.

There’s also a large rooflight above, so the galley area is never gloomy.

When you open the bathroom door, two large mirror-fronted wardrobe doors greet you with your own reflection. And there’s another tall mirror behind the basin.

Behind those wardrobe doors is a hanging rail measuring 1.61m long! That’s enough space for you and your missus to pack a different outfit for every occasion for weeks on end, especially as there’s acres of shelf space, too. The only thing lacking is the depth for ballgowns.

When you’ve decided what to wear, there’s plenty of room to get changed, while there’s also no shortage of space to use the basin and swivel cassette loo (the latest type, of course).

The shower is a separate cubicle, naturally, and is hard to fault. Twin diagonally opposed drain holes, a good powerful jet of water, a roof vent to let steam escape and doors that latch together magnetically tick all the boxes. Maybe a hanging rail for wet clothes would be icing on the cake, especially as the position of the TV bracket means there’s nowhere to hang coats by the door.

If you enjoyed this review, you can read the full version and more in the December 2017 issue of MMM magazine.