Top-quality build and the optional elevating roof stop the HymerCar Free from being just yet another fixed bed van conversion, but this model has neither the unique design touches of the Grand Canyon nor the lower price of a Carado/Sunlight. Instead it fits between the two, where it stands out less but still offers a good all-round package. 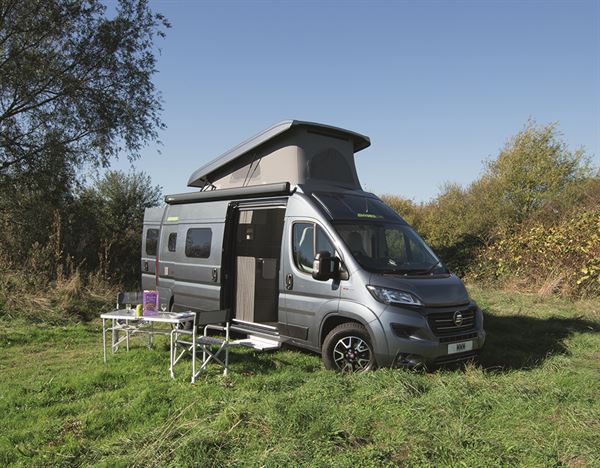 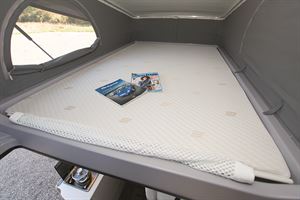 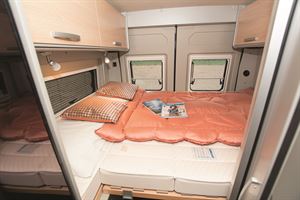 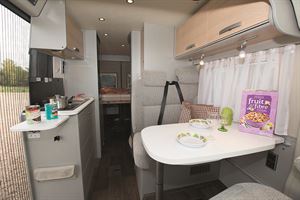 At first, we had expected the Free to represent a more budget-priced Hymer but, despite the £43k starting figure for the six-metre models, there’s still an extensive options list and you’re unlikely to drive one away for much under £50,000. By far the most expensive option fitted here, however, has nothing to do with styling and everything to do with sleeping. The elevating roof with ‘Maxi’ double bed adds £3,620 – as well as 100kg weight and 10cm height – but turns the Free from a two-berth into a viable four-berth campervan.

Here’s my advice to Hymer – give the Free the folding table from the Grand Canyon. There’s nothing actually wrong with the table here but it’s like every rival’s: wall-mounted, with a swing-out extension to reach the swivelled driver’s seat. It works but you can’t really remove it because there’s nowhere to put it. As for the half-dinette, it does without the neat extensions and rake adjustment we’ve seen elsewhere but still manages to be more comfy than some.

The galley is in the usual place, partially across the sliding door (which comes with a flyscreen). It has a small worktop flap at the forward end but, with sink and hob lids open, you’ll need to spread out onto the table when preparing meals. By far the best feature of this kitchen is its three XL-sized (840mm wide), soft-closing drawers, each with a removable divider within. And, running a close second, is the tall, 90-litre compressor fridge mounted alongside at a suitably stoop-free height.

In the heat of a Mediterranean summer (or a 2018 British one), the roof bed will be the place to be. There’s no effort at all involved in raising this large pop-top (rather more in pulling it down), but the bed upstairs is a good ’un. Of course, you’ll need to scale a long (2.10m) ladder but, once aloft, there’s a one-piece mattress of almost 2m in length. Headroom is greater at the front but just enough that you could sleep heads to the rear and large flyscreened panels (offside and front) provide plenty of ventilation.

Like all fixed bed campervans of this type, one of the Free’s most important features is the ability to fold away the rear bed and create a load space. Here, the transformation is especially easy. The centre section of the three-part mattress folds in half and is stowed away on the wider, nearside section of fixed furniture. This reveals the slatted bed frame that bridges the gap between the lockers – simply hinge that up towards the nearside and it clicks and locks into an upright position. Now there’s floor-to-ceiling storage that’s 750mm wide and fitted with a selection of tie-down hooks.

Finally, if there’s one feature we’re pleased to see the back of, it’s the, err, backless basin used in earlier HymerCar washrooms. This small room is much more conventional, with a simple, fixed corner washbasin. The design looks the same as in Carado/Sunlight campers and, although space is quite tight, there’s plenty of room to use the swivel loo – and without dangling legs. The washroom, like the rest of the Free, feels well-made. Nothing here stands out as innovative or clever but neither does this ’van have features that will annoy or disappoint.