The Affinity 462 may be a small caravan at only 4.64m body length, but it packs in a phenomenal amount of storage space, especially in the kitchen. We love the near-white fabrics, especially the abstract, angular fan design cushions which bring together the white and dark brown elements of the whole scheme. We love the 462 to bits! 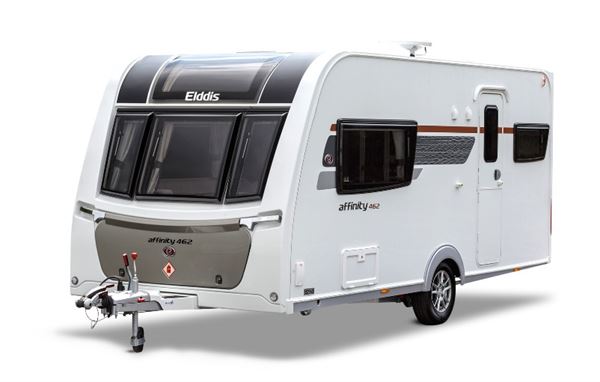 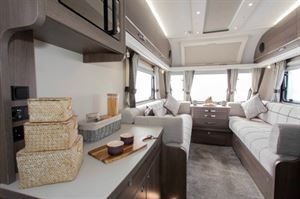 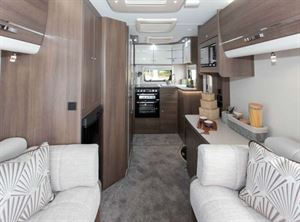 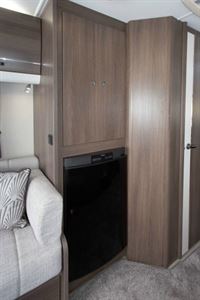 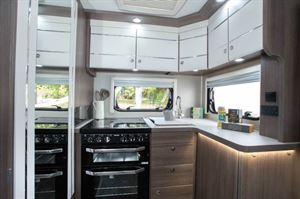 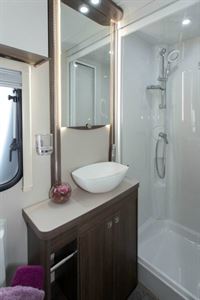 The Elddis Affinity 462 is a two-berth caravan with lots of refinements, including Alde Load Monitor, that make caravanning easier

The Elddis Affinity 462 is a two-berth caravan with many refinements, including Alde Load Monitor, that make caravanning easier

For 2019 the four-model Affinity range gets extra equipment and some detail refinements. These models also emerge for the new model year with one of the most striking fabric schemes of all caravanning time (of which more later).

In our view, the most important stride forward in terms of extra equipment is the introduction of the Alde Load Monitor system. This basically means you can't inadvertently trip out your pitch's power supply by forgetting to turn the Alde heating from 2kw to 1kw when you use a device including an electric kettle.

The Alde load monitor does it for you. It's one thing less to think about; put another way, this is something to make caravanning easier – and, of course, obviating embarrassing conversations with caravan park offices when you have to sheepishly ask for the power to be restored!

Lighting comes on in leaps and bounds for Affinitys for 2019. There's a new-style microwave neatly flush-fitted into its cabinet. And details including locker handles are now sleeker and more prominent.

There are four layouts in the Affinity range: the best-seller 550 with a rear bedroom and central washing facilities, the 554 with a transverse bed, the 574 with twin beds at the rear and the model made especially for two, which we picked for this review.

Why did we choose it?

Because, amid the layouts chosen by couples, the four-berths that are mainly bought by people who never dream of making up the lounge bed, seem to grab so much attention that we thought we'd focus on one purely designed for two.

The Affinity 462 was introduced last year, a super little caravan in the Alde-heated, mid-luxury bracket. Now it just got better, with, as well as the load monitor, a package of lighting which enhances these already-good models.

There's now a concealed strip of lighting under the kitchen work surface – that's there in all Affinitys but in the 462 it's especially prominent because the kitchen is L-shaped and there's a lot of cabinetry.

There's a tiny but bright light at floor level, set into the rear frame of the nearside sofa. That's a super little refinement; the switch is within easy reach of the offside sofa.

So, whether you are using the lounge as single beds or making it into a double, that's the light you can switch off last and, if you rise before dawn (after all, Alde-heated Affinitys are definitely made for year-round caravanning), it's the first to switch on.

When the weather's not great you will notice another of the lighting enhancements; not so much about the actual light, though: the new-style exterior light, above the door, is set into a rain-deflector which channels rainwater down to each side of the door.

And when you need to open the gas locker after dark you'll appreciate another new introduction: there's a bright light set into the drawbar cover, directing light straight into gas bottle compartment, so you can change your cylinder without having to juggle holding a torch simultaneously.

You just flick a switch by the caravan door as you step outside to do the job. Like the load monitor, it's all about making caravanning easier!

The significant aspect of the 462's layout is it has both an end kitchen and an end shower room; the latter stretches 2.1m down the caravan, with the shower cubicle at the rear and plenty of space for washing and dressing forward of it.

The 462, then, represents a huge step forward from the end-kitchen two-berths of yore; caravanning has thankfully moved on from the days of clingy shower curtains in little compartments where the loo and the shower vied for space!

Shower room time, Affinity 462-style, is a luxury experience, with neat strips of LEDs running along each side of the (large) mirror, two ceiling spotlights, two cabinets and a heated towel rail.

- the choice is yours. Converting the lounge to a double bed is a swift and easy task.

A slatted base draws out from under the two drawers at the front, you turn the seat bases over so that the knee-rolls are by the walls, drop in the backrests to complete the mattress and roll out your bedding.

Storage of sleeping bags or duvets is key in a two-berth; we reckon the offside under-sofa locker would accommodate most duvets or sleeping bags, in the space between the Alde heating unit and the power distribution box.

Pillows would easily go into the locker below the drawers; the space inside is much wider than the door would suggest.

That leaves the nearside locker clear for folding chairs and other equipment. There's an exterior hatch – and a surprise: a mains socket and an aerial point, so that you can watch TV in your awning; a channel takes the cable outside when the locker is closed.

The wardrobe gives you a generous 57cm of hanging width; it's above the fridge, just forward of the washroom. You have four lockers over the lounge, one of them containing a shelf. And then there's the dresser to consider.

This gives you a whopping great space in a cupboard a metre wide, with two drawers above. Shoes, perhaps? Kitchen stuff? (If you need to bring a food mixer, a juicer, a coffee machine and a toaster you can, and it will all go in here!) Storage, then, gets a big fat A rating.

The table lives in the wardrobe, where it will stay for 99% of the time, given that the pull-out chest-of-drawers table is plenty large enough for two to dine, at 75cm x 64cm. And the windowsill is there for your bottle of wine or coffee pot.

Nestle into the corners, switch on the TV (connections are by the dresser), put your phones and tablets on to charge (there are four USB ports) and relax!

As we get ourselves in the lounge-experience mindset during our review day, we notice the 462 feels wider than its 2.26m measurement, especially in the dresser-fridge area.

We also take in the stunning fabric and cabinetry scheme. Near-white trimmed with the darkest brown is the Affinity theme for this year and it's awesome. The upholstery is stain-resistant Aquaclean fabric.

The L-shape of the kitchen stretches 1.12m from the rear of the caravan; it's 39cm wide. This is your main food prep area, together with the sink cover almost flush with the work surface. For occasions when you need more, there's the metre-wide dresser.

Storage space is brilliant, with a cabinet under the main surface on the nearside, plus two drawers and a cabinet alongside, and a hideaway for pans under the oven. Top cabinets stretch all the way around the kitchen, finished in matt white with two chrome-effect bands and prominent circular catches.

They make a significant contribution to the ultra-modern look of the 462. We love the size and shape of the sink – rectangular and, at 31cm x 50cm, every bit as large as the one you'd expect in a house. This is a great kitchen for two – even if sometimes you might want to use the dresser for extra surface space.

AL-KO's stability enhancement system, ATC, is part of the package; in our view, all caravans should come with this electronic automatic snake-control feature. The 462, at just 1281kg, is light enough to pair to a wide selection of cars.

This may be a compact caravan at only 4.64m body length but it packs in a phenomenal amount of storage space, especially in the kitchen. We love the near-white fabrics, especially the abstract, angular fan design cushions which bring together the white and dark brown elements of the whole scheme.

We love the full-length mirror on the outside door of the shower room, bordered by white panels with chrome strips. We love the big skylight. Even the sink is worthy of praise, for its size and its shape which makes washing up large pans and oven dishes easy. We love the 462 to bits!