Coachman only launched one new model for 2018, and they saved revealing it until the spring when, traditionally, the sales accent is firmly on family caravans. A good tactic. And a good caravan. 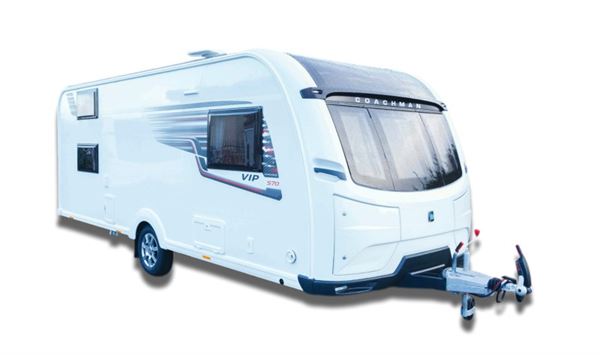 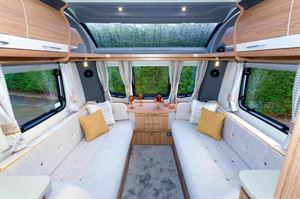 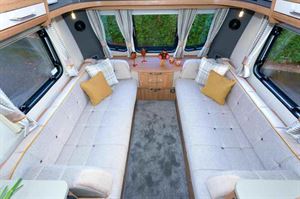 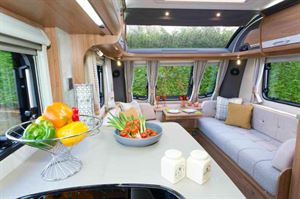 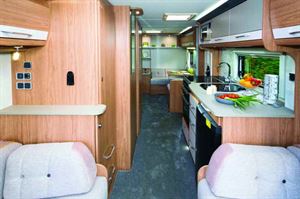 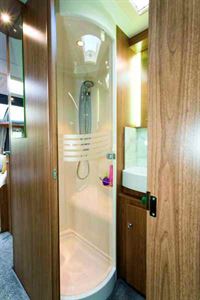 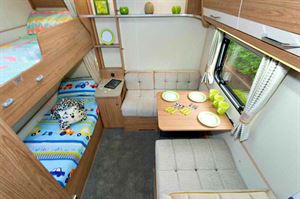 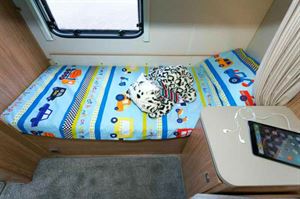 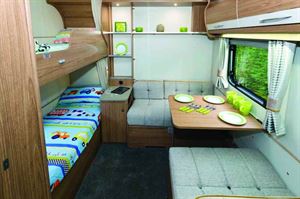 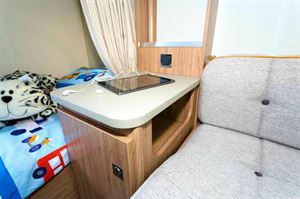 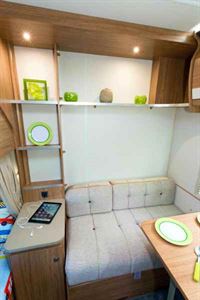 Until now, Coachman's top-spec VIP range has been aimed squarely at couples. The eight-model range offers various layouts, on single and twin axles, all of them with definite couple-appeal.

Now, though, the VIP range has a model specifically designed for families. The VIP 570 is a five-berth, with a layout that gives the younger caravanners their own 'room'.

It has two bunks plus a single bed to make up in the dining area alongside it. This arrangement is a tried-and-trusted configuration that has appeared in various other manufacturers' portfolios for some years. That's because it works well and sells well.

Full marks to Coachman for grabbing a slice of that market sector – with a caravan that has an appealingly high level of specification as befits a flagship range.

For 2018, Coachman introduced a new and unique front-end storage system to the VIP range, along with a re-shaped front panel. There are now two compartments at the front: one for gas, the other for storage. Each is 70cm tall, 64cm wide and 43cm at its deepest point, tapering slightly as the body line curves.

The nearside locker is fitted for two 6 or 7kg gas cylinders. The offside one gives you ample space for outdoor essentials including your mains cable, chocks, waste water piping and loo chemicals.

All these items will stay in place when you tow much better in a smaller locker than scattered around gas cylinders in a compartment that spans the width of the caravan. The doors of both these compartments in the VIP open wide, so lifting gas cylinders in and out is easy.

The 570's layout gives you a shower room on the offside, with the kitchen on the nearside.

There are many plus-points about the 570's shower room. The almost-circular shower is of ample size. The shower room is beautifully appointed, with a high-quality splashback of the sort you'd equate with a domestic bathroom, a neat little toothbrush holder that slides into a circular mount and a wide shelf for shampoos in the shower cubicle.

There's a heated towel rail – part of the Alde system – and a large mirror, bordered by bright white lights. There are two bright spotlights set into the ceiling above the mirror. It has only one towel loop; it's on the door. For six occupants, more would be needed –and there's plenty of wall space to fix them on, especially above the heated rail.

Inevitably, given the central offside position of the washroom, floor place is restricted – it's just over a metre long at its longest point as it curves around the shower and just 54cm deep. But all you need is here including plenty of shelving and a 43 cm-wide, two-shelf cabinet.

The bunks are 1.7m long; the single bed to make from the dining area is 1.8m long. Single beds in the lounge are 1.7m long and 74cm wide. When you make up the double bed, it's a massive 2.05m long. If parents aren't particularly tall, they have the option to use the lounge as single beds – or enjoy the luxury of a large double bed.

The construction of the lounge double beds alters throughout Coachman's ranges for 2018, returning to the pull-out slat system; in models of the last few years, metal frames have drawn out from under the settees. The webbing-linked slats are housed within the centre-front unit, between the drawer and a drop-down-front cabinet. They draw out smoothly and easily.

Lots of beds and settees equals much storage boxes, of course. The under-bunk box and the lounge storage areas have tops which self-support on gas-filled strut hinges. The storage areas under the rear seating area have slide-back slatted tops.

Two slim (19cm deep) lockers are above the rear seating areas; one contains a shelf. The over-lounge locker arrangement gives you a total of six shelf spaces, plus two small lockers that reach into the front line of the caravan.

In the kids' zone, a 35cm-wide cabinet creates all sorts of storage options – for shoes, books, media equipment.

The wardrobe gives you 50cm of hanging width and there are two drawers beneath. The 570's storage credentials meet the needs of six nicely.

Caravans with two dining areas usually earn our A-rating and the 570 is no exception. The free-standing table stows away easily in its own cabinet on the fore end of the wardrobe.

Snack times are catered for by an ingeniously designed table which pulls out from under the windowsill and then automatically slides upwards, on springs, to become level with the windowsill, the resultant area is a massive 83 cm deep. It's an impressive and refined design.

When Coachman redesigned the front panel of VIPs for 2018 the company introduced a lower windowsill and deeper windows – which means a lighter, brighter lounge, helped, of course, by the enormous sunroof. It's a massive 1.57m wide and just over 50cm deep, curving upwards and under a matt grey frame.

Spotlights focus down from the frame into the lounge and, along the sides, lighting is set into recesses which define the slope of the front line of the caravan. The design is both elegant and plain-modern; we love it.

We also love the kids' lounging area, with seating for three, a table for two and a chest of drawers that hides away a power and TV point; this is a young caravanners' lounge thoughtfully designed for media activities.

More TV sockets are in the front lounge, close to a ledge that's ideal for a TV. There are two USB sockets here; one is a one-amp socket, the other 2.1amps, meaning that all devices can be charge efficiently.

We love the VIP level of refinement that includes a light in the oven so that you can easily see if your food is ready. Lighting is set under the edge of the kitchen cabinets and there's also a light at floor level. Even the draining board has the stamp of VIP quality; sturdy, ridged and with a lip to channel water into the sink.

With the hob top down, there is 1.47m of kitchen surface length. When you're making meals for five you are likely to need all that, so this is a kitchen in which pre-cooking prep is key to easy workflow.

In our opinion, a hinged extension would have made all the difference; increasing the 59cm of space forward of the sink by another 30 would transform this kitchen from 'good' to 'excellent' for five-appetite catering.

Storage comes in three deep drawers, 37cm wide, between the fridge and the oven, plus two upper cabinets. We think most buyers will find they need more space for kitchen items but, with storage elsewhere in plentiful supply, using drawers under the wardrobe or a locker above the lounge for culinary stuff isn't going to impinge on other storage functions.

The sink is generous, at 44m x 33 cm and 15cm deep. There's no need to scurry to the caravan site washing up sinks; the boring kitchen task would be easy here.

The height of the microwave won't suit shorter caravanners, although the Chapman review crew find it's just fine.

When we take advantage of a manufacturer's invitation to review a caravan at the factory prior to its release to the public, there is one disadvantage: we can't take it out for a test tow. Coachman understandably didn't want Caravan magazine to unveil the 570 to anyone before the manufacturer's own launch of the new model. Which means we could only tow it within Coachman's premises, shielded from sight by high hedging and fencing. Well, the 570 is brilliant at low speeds! We do, though, have every confidence in its road manners, given our experience with VIPs of a similar size and weight. And, importantly, ATC stability control is standard.

A top-quality, deep pile carpet, USB sockets with different power outputs to suit different devices, a light in the oven and one of the best gas bottle and front storage configurations we've ever seen – the new 570 is laden with impressive features.

Its layout is first-rate for family practicality and holiday harmony, with a well-designed children's 'room' at the rear. If you want a single-axle, high-spec family tourer, this one is a must for your shortlist.

Coachman only launched one new model for 2018, and they saved revealing it until the spring when, traditionally, the sales accent is firmly on family caravans. A good tactic. And a good caravan.