Caravans in the over-£30,000 bracket are doing well in sales terms right now. Arguably this amount of investment in leisure is a happy spin-off from Brexit uncertainties. Lots of buyers are looking for Laser-level of luxury and the 665 provides it in abundance. We love the fridge that you can open from either side, the amount and finesse of the lighting design, especially the illuminated bases of the spotlights, the ultra-deep-pile carpet, and the size of the washroom. 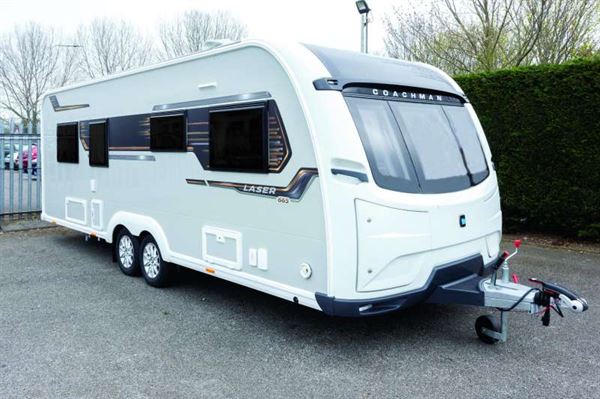 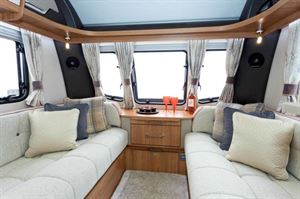 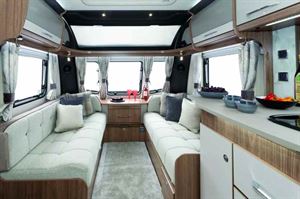 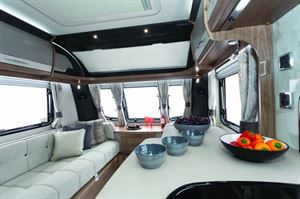 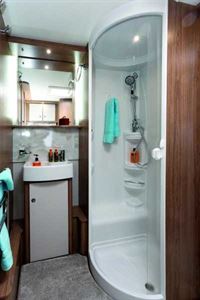 Luxury all the way with the Coachman Laser 665 – and with a fridge that you can open from either side!

Luxury all the way with the Coachman Laser 665 — and with a fridge that you can open from either side!

The super-luxury Coachman Laser range offers three models. Two have island beds. The third, the 665, has twin beds in a rear room, divided from the rest of the caravan by the shower room. That makes it a very unusual caravan.

There are only three other twin-axle, twin-bed caravans which have their bedrooms at the rear. These are the Elddis Supercyclone; the Compass Camino 674 and the Buccaneer Clipper, all made by the Erwin Hymer Group.

The key factor about this layout is that it goes much further than simply being a caravan that appeals to couples wanting a twin-bed model with luxurious amounts of space. This layout is also ideal for families — especially when the kids become teenagers.

We can envisage this layout appealing to families with two girls — they can have their own room, to keep tidy (or untidy… more likely!) and it’s well away from the rest of the caravan, so the untidiness isn’t seen, or the noise heard as much. And that all helps family holiday harmony!

The 665 is surefootedly in the top-spec class. It has Alde heating (a given in this price bracket, of course), and the Alde load-limiter system which switches off the heating automatically when you are using a device such as a microwave. This prevents you from tripping out the pitch’s power supply by overloading it.

And the 665 — along with the two other Lasers — has something no other ’van in Britain has — a fridge with a door that opens from either side!

It also has finesse in spades. The palest grey-fawn carpet has a luxuriously deep pile. The USB ports are set into the bases of the spotlights in the bedroom. There’s a shelf, above the mirror, which is the ideal place for phones while they are charging. There are two more USBs by the door, again with a shelf at hand.

Soft-close hinges, dovetail joints and metal runners on the drawers, all amount to the Coachman stamp of craftsmanship on which this manufacturer has built its reputation. And, while many manufacturers have moved away from sprung upholstery, Coachman has reintroduced it. It’s firm and gives the impression it will stay that way for many years to come.

Both doors to the shower-dressing room are hinged and both have magnetic catches so that there are no latches on which to catch clothing. As the magnet and the latch come into alignment, the magnet pulls the latch into position, securing it closed. Try it — we know you’ll be impressed!

Little details include floor-level night lights (one in the bedroom and, in the kitchen, a strip of lighting running under the base of the kitchen units). All the spotlights have touch-controls and illuminated bases; you touch the control once to just illuminate the base and a second time to turn on the spotlight.

Lasers have what Coachman calls 'multi-layered lighting' in the lounge, which means that, in addition to lighting above the top lockers and within the pelmets, strips of light are concealed below the edges of the settees.

Other refinements include the ability to play music from your smartphone or other devices via the USB or aux input on the 665’s radio system.

An alarm and Al-Ko’s electronic stability control system are here, and so is an extractor fan.

Lasers even come with a 13-pin car alignment cap — that little green plastic bit of kit which you insert into the caravan’s electrical socket and twist to realign the pins and slots on occasions when it stubbornly refuses to go into the car’s socket.

All the gizmos you expect at this price level and a few more are here, like the external cold shower, ideal for cleaning muddy boots or your dog’s muddy paws. There’s also a 36-litre onboard water tank that’s mounted under the caravan.

All that — and with a very distinctive appearance. The Laser name disappeared for a year when these models were merged into the VIP range, with which they share specification level.

There was an outcry among Laser aficionados. They wanted the Laser name back, and they got it; update-purchase, brand loyalty is important, of course. The new Lasers came back in spectacular fashion, with distinctive, silver-grey side panels and some of the boldest graphics on any caravan, in bronze and gold shades that instantly convey the range's luxury image.

Luxury appearance is in all sectors of the 665, including the shower-dressing room. Bright white lighting runs down each side of the mirror above the washbasin. Four tiny, but very bright, spotlights are set into the ceiling. In the shower cubicle, a towel hanger flips down when you want to use it — and up again out of the way, when you’re having a shower.

There’s a towel loop alongside the shower and two double hooks nearby — that’s in addition to the Alde heated towel rail.

But the greatest — literally — thing about this washroom is its size. It’s 1.3 m long, from the door leading to the bedroom to the one that opens into the kitchen.

The wardrobe is in the shower room, on the offside. And it’s huge — 70 cm wide and with a two-shelf cabinet of the same width beneath it.

Two windows and a large roof light ensure the bedroom is light and bright. The ‘dressing table’ — two drawers, mirror and generous (55 cm by 52 cm) surface, flanked by upholstered headboards that reach right up to the bases of the lockers above — looks far more boutique hotel style than a caravan.

With two power points and speakers set into the bases of the lockers in the corner, the 665’s bedroom is quite fabulous. When you turn the lounge into a bedroom, webbing-linked slats roll out from beneath the front drawer to make a bed.

Aside from the large wardrobe (with a light that comes on automatically when you open the door), the 665 has a staggering nine top lockers in the bedroom, all with soft-close hinges. Three of them have shelves. Two drawers are in the bedroom, one in the lounge. Both of the under-bed spaces have exterior hatches.

The under-settee spaces don’t have front access, but the tops are supported by gas-filled hinges, so they’re easy to use. If you need to, that is, considering the amount of storage elsewhere!

The table has its own cabinet, the top of which forms a shelf beside the door. When you don’t need dining space for four, the front-central table comes into play. And it has a cleverly designed mechanism that, when you draw it out, brings it upward to sit level with the windowsill; that gives you a surface 83 cm long.

The settees are 1.4 m long, creating enough space for feet-up reclining, but not for full stretching out — but you’ve got two single beds for that, complete with TV points so that you can turn your bedroom into a second lounge!

Three scatter cushions, in fabrics of different textures and hues, plus feature upholstery buttons in mid-grey, all endorse Coachman's image for stylish luxury.

Style meets practicality here, with a slim cast-iron pan trivet that’s very easy to remove and refit for cleaning, plus a glass sink cover that’s flush with the surface. The sink and hob are black enamel — that means they look smart and there is no chance of staining. With the 30 cm extension in place, the kitchen is 1.6 m long.

Storage comes in the form of three drawers, each 43 cm wide, plus a 24 cm-wide cabinet containing three pull-out shelves, and a cabinet above the 153-litre fridge, and two top cabinets, each 38 cm wide alongside the microwave. There's a place for everything!

With the inherent stability of twin axles, plus Al-Ko’s electronic stability system, the 665’s towing gear is up there with the best. These two factors make for easy, predictable handling and relaxed towing — which is exactly what we’ve found each time we’ve towed Lasers. The 655 offers a typically confident towing experience.

Caravans in the over-£30,000 bracket are doing well in sales terms right now. Arguably this amount of investment in leisure is a happy spin-off from Brexit uncertainties.

Whatever the reason, lots of buyers are looking for Laser-level of luxury and the 665 provides it in abundance.

We love the fridge that you can open from either side, the amount and finesse of the lighting design, especially the illuminated bases of the spotlights, the ultra-deep-pile carpet, the size of the washroom, and the front-central table that automatically becomes level with the windowsill.

The list goes on, outside, to include a ‘dog-and-boots’ shower and a Whale Watermaster pitch-tap connector as standard. The Laser 655 may have a hefty price tag, but this is a top package of value.