If you want the lightest, cheapest family caravan you can buy, you have it here in the Caravelair Antares Family Style 496. If you also want awesome bright white styling, impressively solid furniture, good lighting level, an enormous double bed, four coat hooks by the door, amazing storage, you have that, too. For all of those reasons, we love the 496. 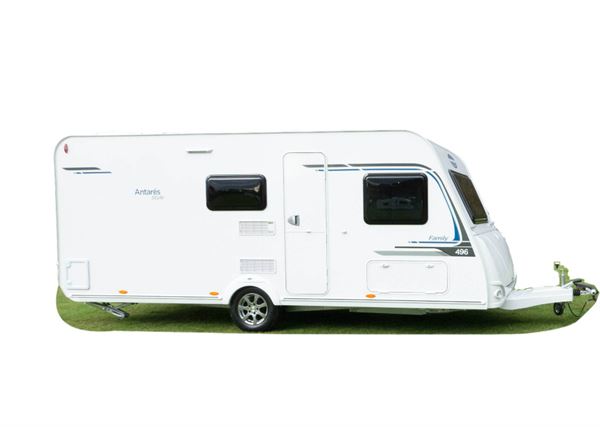 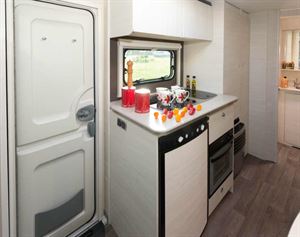 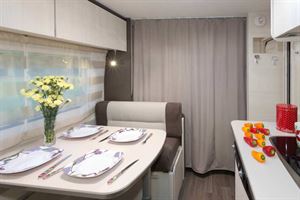 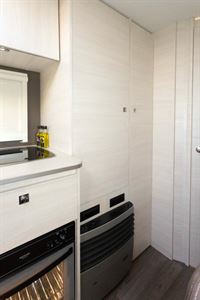 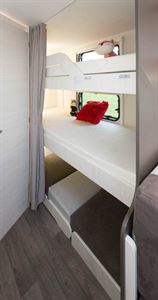 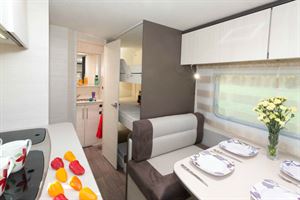 Of the six layouts in the range, two are designed specifically for families. The 496 is the largest in the Antarès range. At just £14,995 and with an MTPLM of only 1300kg this is one of Britain’s lightest and lowest-priced caravans. Its price is comparable to the used sector of the market – but, unlike used caravans, Antarès come with five-year bodyshell water ingress warranties.

And, at this weight, they are within the scope of drivers who don’t have the B+E licence and which restricts the total weight of their car-caravan combination and makes them pretty different caravans.

All six of these models have layouts that are refreshingly different from the familiar patterns to which most British-made caravans adhere. The 496, though, is arguably the most impressive in design terms. This caravan is just 5.2m metres long yet, it can sleep seven. That’s mum and dad in a double bed, three little offspring in bunks and two more in a double bed that converts from the dining area. The 496, thus, is an excellent caravan.

Styling is fantastic. All the woodwork is white except for two brown part-walls. The upholstery is white with a fawn fleck, bordered by dark brown suede-look fabric. It’s a bright sparkly modern look. If you like IKEA style, you’ll love the Antarès.

Marquis has put its stamp on this French-made range. These Caravelairs have Truma heaters with a unique system developed by Marquis called Caraheat; it delivers blown air without using pipework; there are two 12-volt-powered directional vents above the heater unit. It’s a gas-only system.

Water heating is the Truma Therme system, operated on mains electricity only. The heater has a five-litre capacity and heats water up to 65º, which means you get up to 10 litres of warm water (when the hot water is mixed with cold).

There's a general quality look and feel about these caravans. The furniture feels very solid in construction. The fabrics feel as if they’re made to last a long time.

Niceties include lights in the ovens, ceiling lights composed of scores of tiny led bulbs set behind a gleaming glass-effect panel, and spotlights on long, flexible stalks. The windows have voile panels, with small weights sewn into the hems so that they hang crisply.

The panels hang on café-style rods, but they are not intended to be drawn back; when you draw them back, they quickly creep back to their total-window-covering position. If we bought an Antarès, we’d probably find a way to fix them back, especially in caravan parks where you want to enjoy a view uninterrupted! The idea, of course, is privacy. And Antarès goes a step further.
The windows are tinted. From the outside they are virtually black; it’s impossible to see anything inside. These cleverly-designed windows take little light off the interior.

Another feature that sets Antarès apart from the vast majority of caravans on the UK market is the barn-style door. These two-piece doors have gone out of fashion in recent years; many caravan makes have introduced single-piece units.

But that doesn’t suit everyone, especially caravanners who have dogs (which is a vast number). In an Antarès you can leave the lower half of the door closed so that your four-legged friend can’t get out (or in, if he’s in an awning) and you can have fresh air streaming in through the open top sector.

Caraveliars come with full-door flyscreens, incidentally, and spare wheels, hitch-head stabilisers and shock absorbers – all that you’d expect and more besides at this price.

Showering arrangements, equally as you might expect (but this time for reasons of caravan-length compactness), are a combined loo-shower compartment, with a curtain to shield the bench-style toilet and the walls from water.

The shower tray is 6cm square, so certainly adequate in size. The washbasin is in the top of a cabinet in a separate area of the washroom. A large mirror is above it – and there’s a surprise: a mains socket in the ideal position for using a hairdryer. Sockets in washrooms are something you don’t find in British-made caravans.

The double bed is 2.08m long, so the 496 is one for tall buyers to consider. It stretches the entire width of the caravan – at the front. It’s 1.37m wide, and with no cut-off section. This generously-sized bed’s French-made mattress is a foam construction. It feels firm (but not unyielding).

The triple bunk stack is ideal for young children before they grow tall enough to need more head-height. And the lower bunk is so close to the floor that it’s perfect for any little caravanners who might have a tendency to roll out of bed; here; it’s only just above floor level.

And the centre bed for two? You hinge up two base extensions at the outer edges of the seats and construct the bed using the table an additional support section. You stow the upholstered parts which complete the mattress under the double bed.

As we were investigating the bed arrangements, we also came into close contact with the 496’s storage capability. The wooden seat bases hinge up to reveal sizeable capacity. And the double bed’s cavernous space is super-easy to access; it’s supported on two gas-filled hinges and opens to a full aperture. There’s an exterior hatch to this space, too.

The base bunk area converts to storage space, too; the centre section rises on hinges. There’s a clip on the wall to keep it in that position. Space is useful for storage – or even the dog’s bed!

Upper storage space is good, too; two large lockers over the bed and two more over the table area.

The 496 may have beds for seven but, in true French style, the designers expected that you'd eat and relax outside or in an awning. That, after all, is most people’s preferred caravanning style, if the weather is good! Inside the 496, though, four can seat comfortably. The dining area is also the lounge, which is contrary to British style. But that’s the whole point about the 496; it’s refreshingly different. And if you want to relax with feet up, there’s a bed.

A television bracket hides neatly behind a part-wall by the door, on the edge of the bed; you can swing it out to watch your TV either in the dining area or on the bed.

We had started our review early on a cold but sunny November morning. It was a real test of the Caraheat/Truma system’s efficiency. Within around 15 minutes of switching it on, the 496 was toasty warm in all areas except the washroom; the two 12volt-powered vents above the heater do push hot air out with velocity. When you want to get your Antarès cosy, you really can.

We were soon turning it down to a minimum setting as the caravan became thoroughly warm. We’d been keen to test the efficiency of this new Caraheat/Truma system – and it’s certainly impressive.

Antarès caravans have Thetford Duplex combined oven grills and three-burner hobs; all that you need is here except if your cooking style relies on a microwave.

Lower kitchen storage is limited to a large drawer (with generously proportioned recesses for cutlery), a small cupboard under the oven – and the fridge, of course. Two large cabinets are above the kitchen. If you need more space, you can take over some of the excellent four-shelf-space cabinet aft of the wardrobe. Or one of the four head-height lockers elsewhere.

Steve Riggs of Marquis delivered the 496 to Woodland Waters for our review; on arrival, he commented on its excellent towing characteristics. Our test tow mirrored his impressions; on narrow (and not always evenly surfaced) lanes there was a minimal bounce, thank to shock absorbers. And at all times it felt brilliantly stable.