This is a little gem of a caravan, ideal for a young family or a couple seeking a caravan with a dining area as well as one that you convert to a bed. And it has quality in spades. Any which way you look at the Weinsberg 400 LK, it is astounding value for money. 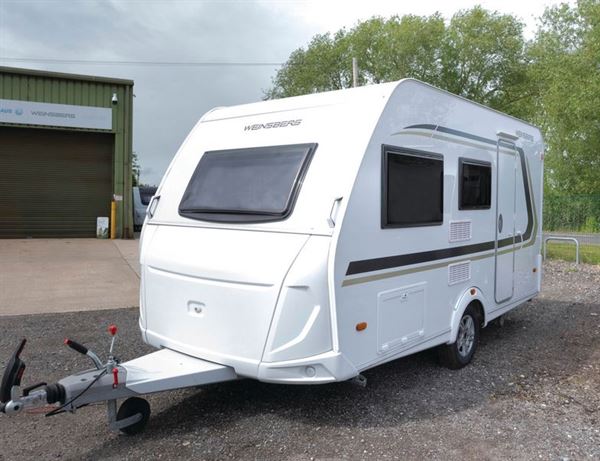 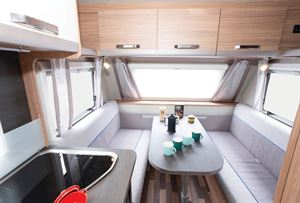 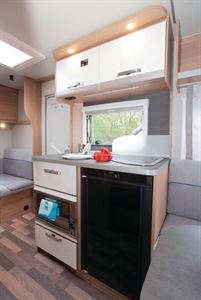 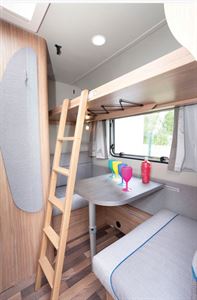 What can you buy on the new caravan market for under £18,000? Answer: very little I'm afraid. There’s a smattering of two-berths, among them the British-made Xplore 422 and the glass-fibre Freedom Sunseeker and Microlite models, made in Poland. Four berths? There’s the Xplore 304 at £16,444 – and that’s all, apart from a handful of models in the German-made Weinsberg range.

Weinsberg, part of the giant Knaus Tabbert Group, makes the 400 LK in three layout variations, one with a dining area that converts to bunks, a five-berth with triple bunks – and this one, with two bunks. This diminutive caravan has an MTPLM of only 1,200kg. Only the Xplore 304 shares the four-berth, ultra-light spotlight, at 1,043kg. And that one doesn’t have fixed bunks; you create bunks from a dining area.

The Weinsberg 400 LK, thus, is a unique caravan. We came to Barnsdale Leisure, in the village of East Hardwick, close to Pontefract, to find out more.

The bunk area is across the rear. And you can order a 400 LK with an optional-extra door (£240), to lead into the lower bunk area, so that this area can be used for storage. You can have an oven for an extra £667; that’s fitted to our review 400 LK.

The lounge/dining area feels surprisingly roomy, given that the body length of this caravan is a mere 4m.  The settees are 1.25m long – and the table is a generous 1.16m long and 62cm wide. It stands on a single leg and clips to the forward wall, on a sturdy metal runner that allows the table to be moved to the left or right.

When you transform the dining area into a double bed, the table leg folds, at the click of a button, to transform into a support, so that the table sits at settee-cushion height. The backrests provide the centre of the mattress. The same table-leg structure is at the rear, for the single bed, 1.8m long and 84cm wide.

The bunk folds down from the rear wall and there is a fabric mesh panel that clips to the roof to prevent anyone from falling out of bed. When it is hinged back up to the wall, you wouldn’t know there was a bed there. It just looks like a large top locker.

And, on the front, there is an elastic bungee construction designed to secure magazines. The bed ladder hooks have fabric pads to protect the woodwork of the bunk from any accidental scratches.

The kitchen surface area is 1.11m long and 65cm deep, with a good amount of space between the sink and the curved triangular three-burner hob. And there’s a nice refinement here: an opaque glass splashback to protect the window from cooking splashes. And a black glass hob cover rises to the right to prevent any splashes from heading towards the sofa.

A strip of LEDs, set into the base of the two top lockers, creates a bright light. Each of the top lockers is an excellent 53cm wide and 35cm deep; one has a removable shelf.

Lower storage is two compartments, above and beneath the oven/grill. Each of these is 46cm wide. The top one has six recesses – space for more cutlery than you’d ever need in a caravan.

The lower storage area has a drop-down door; it’s deceptively large, with usable space that’s 30cm deep and 30cm high. The kitchen has a nice – although tiny – touch that you won’t expect, but now appears in several caravans made by Knaus Tabbert. On the front of one of the top kitchen lockers is a circular magnetic pad, along with a magnetic pin to secure recipe cards, reminders, shopping lists – or, if you'd like, a couple of postcards as mementos of your adventures.

As we explored the storage arrangements, we were continually impressed by the build quality and solidity of the lockers and locker doors – and the capacity of the lockers. The front locker suite runs the entire width of the caravan.

There are three lockers, the two side ones are 76cm wide and 50cm deep. The centre one is 49cm wide and 50cm deep, and has a shelf halfway. The shelving adjacent to the front lockers is substantial. Each is 23cm deep and 46cm wide, with an 8cm-high divider in the centre. The shelf on the offside has a mains socket.

As you’d expect in a caravan of such compact dimensions, the shower and toilet share a compartment.  It’s 1.1m long and 74cm wide. A curtain tracks around the shower tray area. Even though it’s small, there are some nice touches, including a 46cm-wide, hinge-down towel rail mounted in the ceiling.

There are two substantial towel hooks, and two cabinets and three shelves, plus a shelf that runs the length of the compartment. The tap removes on an extending hose, to clip to a bracket in the ceiling, so that you can use it as the shower rose. Small though it is, considering the size of the caravan, the shower/toilet compartment acquits itself well.

Spotlights, of a stylish, cage design in steel, are at each of the four corners of the caravan. Two bright spotlights are set into the ceiling above the over-kitchen lockers. A strip of light runs under the kitchen top lockers.

Among the impressive features in this caravan is the curtain that divides the lounge/double bed from the rest of the caravan for extra privacy. It’s high-quality dark brown fabric that is of near-blackout density. Each side of the curtain has a discreet metal rod sewn into it, to hold it in place once it is drawn.