The VIP 460 is a thoroughly modern caravan in every way, stacked with practical surprises that add up to an extremely well-thought-out package. While we love Coachman’s flagship Lusso for its superb level of quality, not everyone wants a £40,455, 1,960kg caravan and the much more compact VIP 460 is not far behind in terms of luxury. 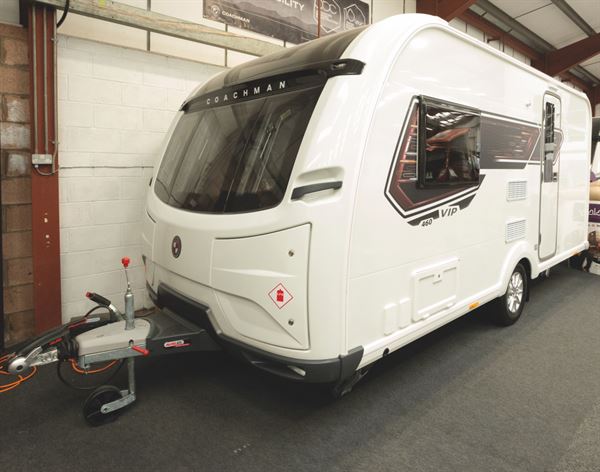 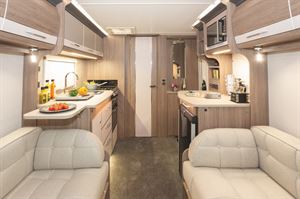 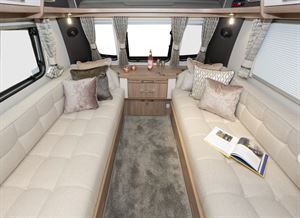 One of the longest-running names in caravans, the VIP is now in its 33rd year. Since its inception, luxury has been at the heart of the VIP – and VIPs have always enjoyed a strong following in the two-berth market.

So, luxurious caravanning for two, with bells and whistles aplenty, the 2021 VIP 460 makes a surefooted stride into an ever-more demanding market.

These are the Elddis Affinity 520 and the Compass Capiro 520; both are the same price (£23,394 including delivery) and same weight (1,345kg MTPLM). All these have the Alde heating system.

Not many years ago, the two-berth concept was a much more major player in the caravan market. The advent of compact fixed bed models drove a wedge into the two-berth market, as many buyers opted for the luxury of not having to create their bed every night.

But there is still a strong case for the classic two-berth, end-shower-room tourer. These are the reasons why: they have longer settees than compact fixed bed caravans, so feet-up lounge relaxing is a whole lot more comfortable.

They have more generously proportioned shower rooms. And, when you transform the lounge into a bed, it’s a very big one.

At 6.38m in overall length, the 460 is shorter than the Elegance and both the Affinity and Capiro. It’s also slightly heavier, at 1,444kg, and the Merida is both shorter and lighter. Figures analysis over, what features distinguish the VIP 460 from the pack?

We had a day with the 460 at the showroom at Adventure Leisure Vehicles, beside the M6 at Tebay in Cumbria, to find out.

The 460 is full of surprises. Among the most ingenious, yet impressively simple, is a heated cabinet by the entrance. It’s 50cm wide and contains two shelves. Alde radiator fins run alongside the cabinet.

Why would anyone want a heated cabinet? This is why: the shelves are plenty large enough for at least two pairs of shoes or boots. So, if you get your boots wet on a rainy walk, they will dry in their own cabinet.

We have long been fans of shoe cabinets by doors, but this takes the concept to a whole new level.

We also love the dresser, forward of the door. It houses the mirror-fronted microwave, four shelves and a 25cm-wide cabinet plus the fridge and a cutlery drawer.

It also gives you a working surface that is 88cm wide; in effect, making the kitchen galley-style. And that galley configuration is a big reason to like the 460; the kitchen is generous in size.

Coachman has always been renowned for top quality – and for brand loyalty. The long-running VIP range is the best example of the latter; we’ve met many caravanners who say they would only ever buy a VIP! Perhaps little wonder, then, that the VIP is Coachman’s best-selling range.

The 460’s kitchen is 1.5m long with a 30cm hinged extension. The cabinets and drawers are finished in a delightful cashmere shade.

There’s a 26cm-wide cupboard with two pull-out shelves plus a lower shelf space, and three drawers, 59cm wide, all with positive catches. And the pan rest is cast iron! This adds up to a kitchen with more than adequate storage space and a general high-class look and feel.

There’s another VIP surprise in the dresser sector of the kitchen. We’ve become accustomed in the last couple of years to seeing, in larger caravans, tall fridge/freezers with doors that open from either the left or the right.

You can read more caravan reviews online by using our in-depth digital library. Sign up and you can access hundreds of articles from Caravan magazine, using the search function to find the exact content you're interested in. Start by typing 'Coachman' into the search bar below:

Indeed, Coachman was the first manufacturer to introduce this to the UK market. But to find that the 460’s smaller, 115-litre capacity version has this double-opening door is completely unexpected. It’s a new feature for 2021.

Another new feature for this year is that the centre-front slide-out table is slightly longer than in previous models, creating a surface that, including the windowsill, is 89cm long.

The settees are 1.85m long; amply sized to create single beds. When you make the lounge into a double bed, it measures 2m by 1.7m. Slats glide out from under the centre-front drawers to complete the bed base.

And the shower room? Coachman has built a reputation for generously proportioned shower rooms and the 460’s is typical. It measures 1.35m at the deepest point.

There’s an air of boutique hotel about this shower room, with a rock-effect splashback and matching panel in the shower cubicle, a tall, white towel warmer and a large, white, oval top-mounted washbasin that’s fawn on the underside.

A neat pull-out unit of three hooks is in the shower, for towels or maybe rain-soaked coats. Two corner shelves are there for shampoos. A towel hook is by the door that leads out of the shower room, and there’s a towel loop on the door.

A Roman-style blind trims the opaque window. And there’s a surprise. This shower room has two wardrobes. The one alongside the shower is 26cm wide and contains the dining table.

The larger one, on the offside, provides 70cm of hanging width plus two drawers. In the base of the wardrobe behind the drawers, a lid lifts to reveal a linen bag suspended on press-studs. And there’s a nice little refinement: a light comes on automatically when you open the wardrobe door.

Lighting design elsewhere makes a major contribution to the overall VIP styling, too. Light runs under the edge of the kitchen and dresser surfaces and also along the base of the kitchen cabinetry.

A line of light outlines the area above the front corner lockers. And a light above the cutlery drawer is controlled by a small switch on the side of the fridge cabinet. In the kitchen the lighting design incorporates one of the 460’s many surprises that we gradually discovered.

Storage is generous and the major storage factor is the space under the settees. Access is easy; the tops are supported on gas-filled hinges and there is an exterior hatch.

The VIP 460 has lots of luxury elements. Like the built-in contactless phone charger, set into the windowsill. There’s a barbecue point and an exterior mains socket. And – the smallest of things count: Coachman caravans come with a little green device – it’s the 13-pin aligner that sorts out the caravan-car connection when the pins socket becomes twisted out of alignment.

We love Coachman’s twin front locker arrangement. The offside locker is fitted for two 6kg or 7kg bottles and getting them in and out is easy because the locker is 68cm deep.